"I love being in the house barefoot,” says Lynne McEachern of her west-end Toronto home. “The rugs are plush to walk on, the sofas are comfy to cuddle up on and our bed is hard to get out of in the morning.” Lynne and her husband, Hamid Arabzadeh, purchased their 3,400- square-foot turn-of-the-century house 11 years ago after transplanting from Boston. The Canadian couple – she grew up in Halifax, he’s from Montreal – work in the tech industry and their careers have taken them all over the world, including London, where they met. When it came time to settle back in Canada, they decided to try out Toronto. “We liked the layout of the city, which reminded us of London, with all the great neighbourhoods,” she says.

When the couple found this house, they loved its trendy location as well as its open plan and move-in-ready status – the space had been given a distinctive loft-style look, featuring cherrywood, slate and concrete by its previous owner. “In Boston, we had just completed a painful two-year reno and really didn’t want to go through the process again,” says Lynne.

But after living in this home for 10 years, the couple – who now share the house with their twin eight-year-old sons, Aidan and Camden – craved a change, wanting to give the dark, masculine interior a fresh pick-me-up. “We had made a few updates over the years,” says Lynne. “We tweaked the kitchen, updated part of the basement, added a room upstairs and built a new garage. But then, the house needed more light and a look that better reflected our California coastal style.”

To achieve an airy, beachy feel that still honoured the home’s loft-like urban character, the couple hired designer Jacquelyn Clark. As former editor of Style Me Pretty Living (the design arm of the popular wedding website Style Me Pretty) and the writer of her own lifestyle blog called Lark & Linen, Jacquelyn has gained a solid reputation for her savvy design sense. “I trusted her eye,” says Lynne. “I was familiar with her blog, and I like how she’s curated her look.”

Jacquelyn brightened the space by refinishing certain architectural details, such as bleaching the floors and painting the dark wood ceilings white, while leaving other features – the big beams, exposed brick and wrought-iron railing – striking a beautiful balance between coastal and industrial. “I wanted to showcase the existing structure,” she explains. “The hardwood and exposed brick add a bit of warmth.”

Jacquelyn employed a neutral palette throughout the house, with a few hits of watery blue to achieve that coastal look, while clean-lined furnishings offer calming consistency and deliver comfort. “The more modern furniture plays off all the rustic architectural details,” says Jacquelyn. “They’re a young, busy family, and I really just wanted to create a space that felt simple, elegant and timeless.” The barefoot-friendly comfort is an added bonus. 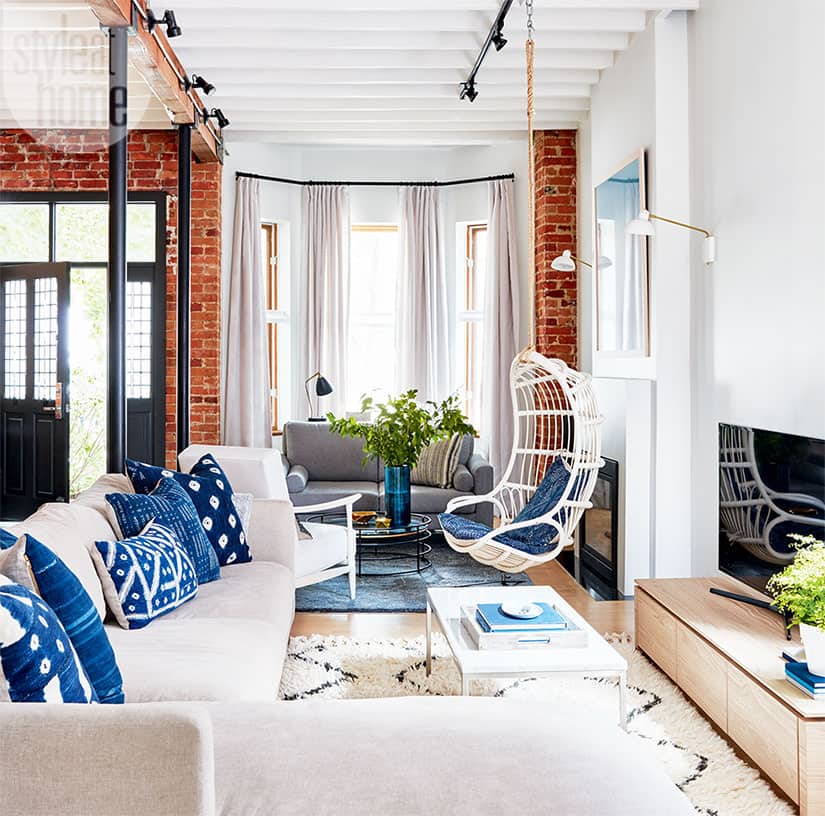 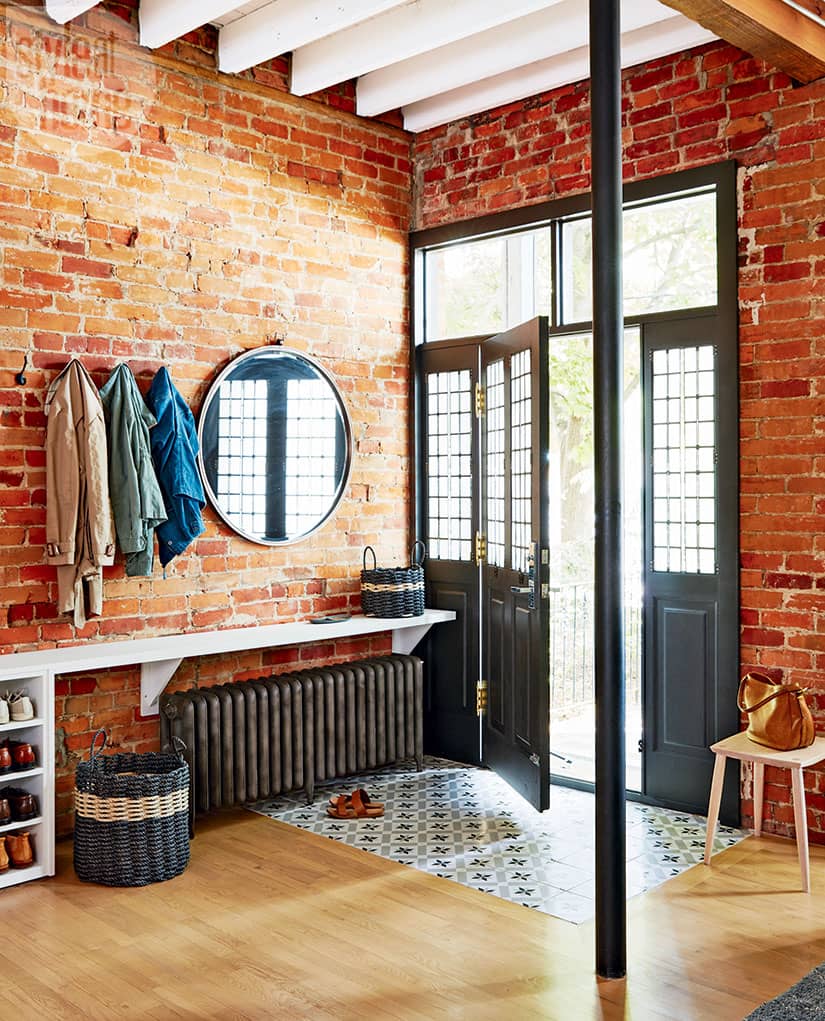 “Originally, a four-by-eight-foot mirror hung from the ceiling and separated the entryway from the living room,” says designer Jacquelyn Clark. “But we removed it to open up the space.” Encaustic-look porcelain tiles, which supplanted dark green slate that had seen better days, are low-maintenance and durable in this high-traffic area. 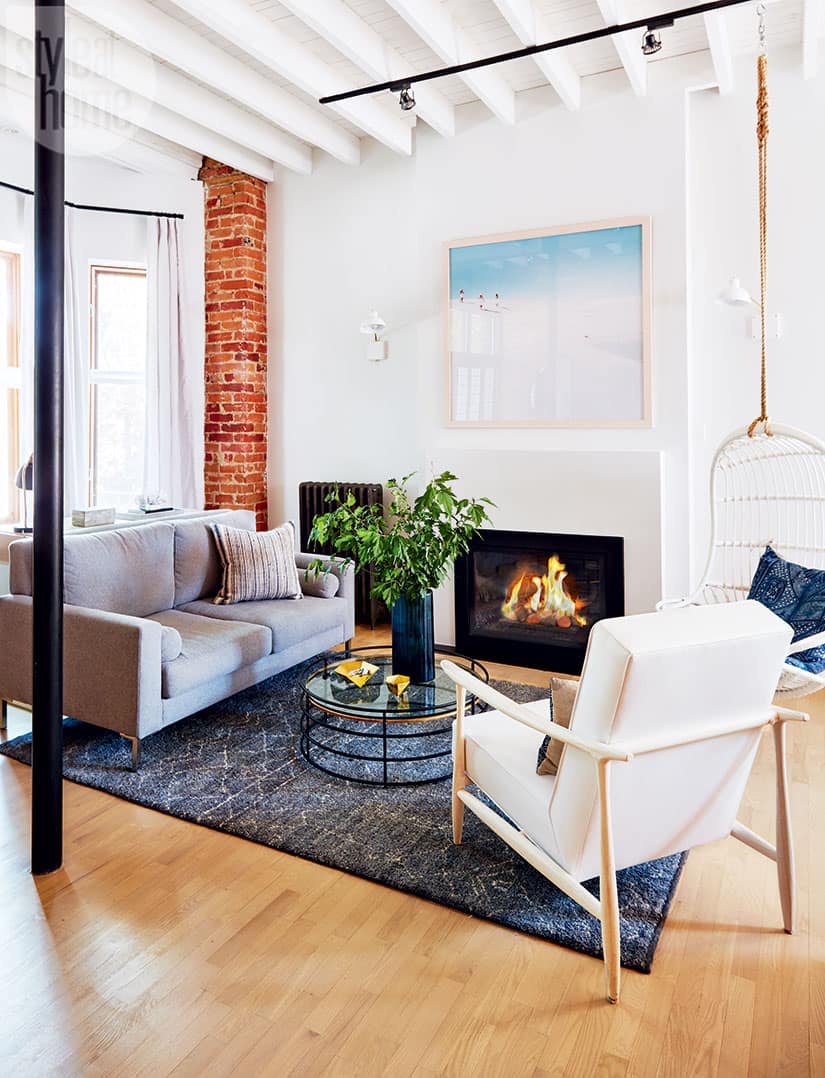 White-painted walls throughout the main floor brighten the space and strike a gallery-like setting. “I wanted a blank slate so we could collect and showcase art,” says Lynne. The original too-yellow oak floors were bleached for a lighter look. 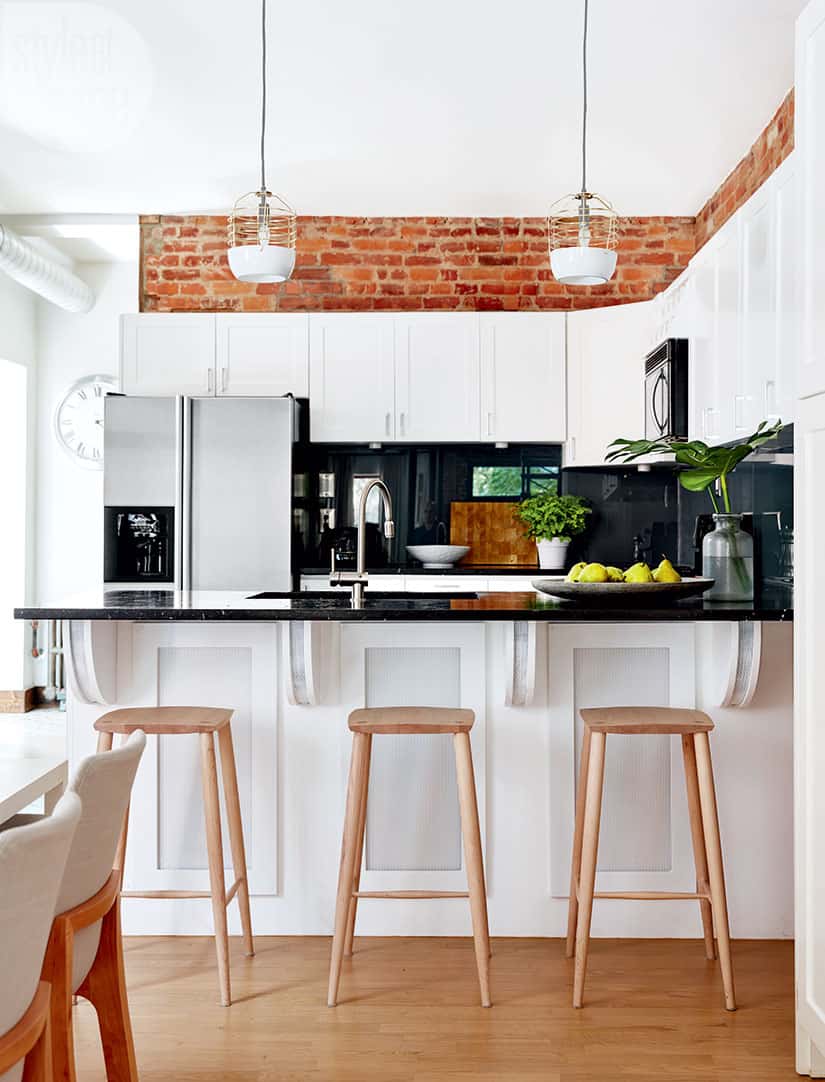 The couple had already upgraded the kitchen by spray-painting the cherrywood cabinetry white. This update — called refacing — can save up to half of the cost of replacing them, and it's fairly easy to do: You keep the original cabinet boxes and change the drawer fronts, doors and hardware. “If it’s a custom kitchen to begin with, you have to go to a custom cabinetmaker or kitchen company,” says Jacquelyn. “They will gather all the measurements and build doors to fit the existing boxes.” If the kitchen has standard-sized cabinet boxes, replacement doors may be found at big-box stores.

Note: Refacing is only recommended is the cabinets are in good condition. “If they’re solid wood and in good shape, refacing not only cuts down on cost but also saves on the inconvenience and waste. If you’re not sure about the quality, ask your contractor, ” says Jacquelyn. But, if you're changing the layout of your kitchen, it may be easier (and possibly more cost-effective) to opt for new cabinets. “Using the same boxes...is called retro fitting a kitchen, and I’m always hesitant to do that,” says Jacquelyn. “It’s often not worth the cost of a contractor’s time to figure it all out. And when something inevitably breaks, you’ll have to replace certain pieces anyway.”

In the case of this industrial loft, Jacquelyn swapped the existing cabinetry doors (which had seen better days) for a Shaker profile similar to the original and incorporated chrome pulls. Furthermore, the slate countertops were replaced with black soapstone and a grey back-painted glass backsplash was installed. 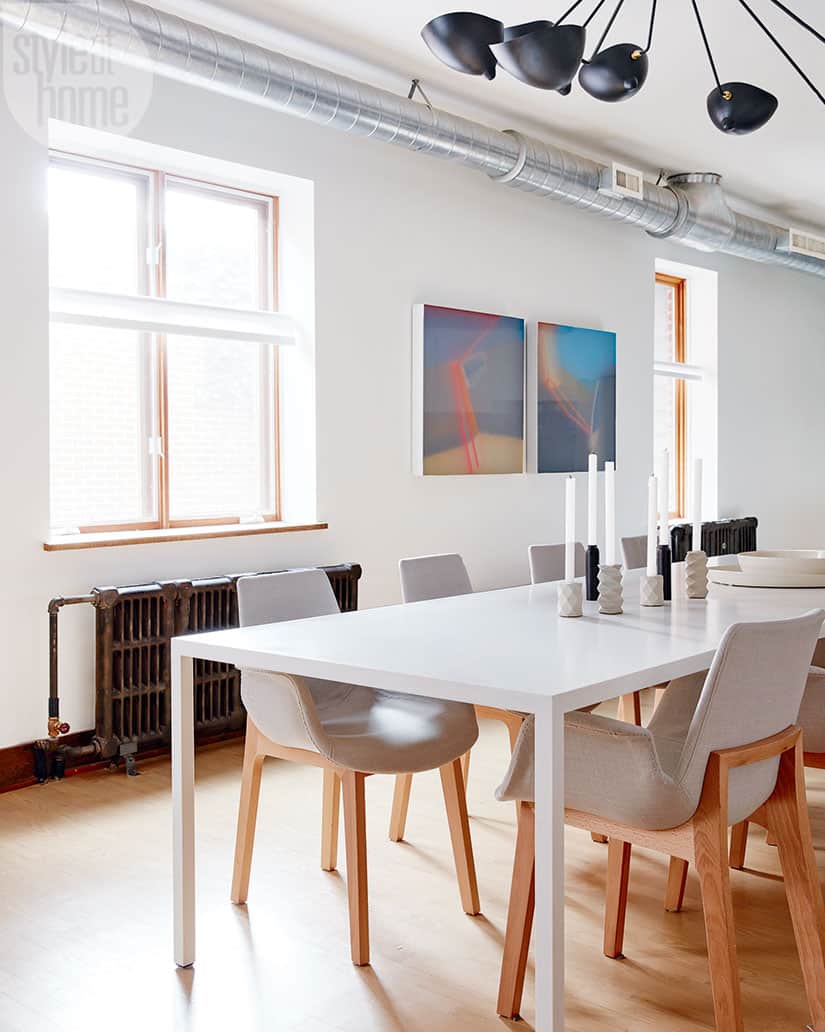 Lynne wanted dining chairs that were comfortable and offered a light, airy feel. “But I didn’t want to spend a ridiculous amount of money, because dining chairs often end up getting ruined,” she says. These ones were scored online from a New York store called France & Søn and required a road trip. “The store didn’t ship to Canada,” says Jacquelyn. “So we had the chairs shipped to Buffalo, rented a van and picked them up from there. It was still more cost-effective than buying something similar here!” 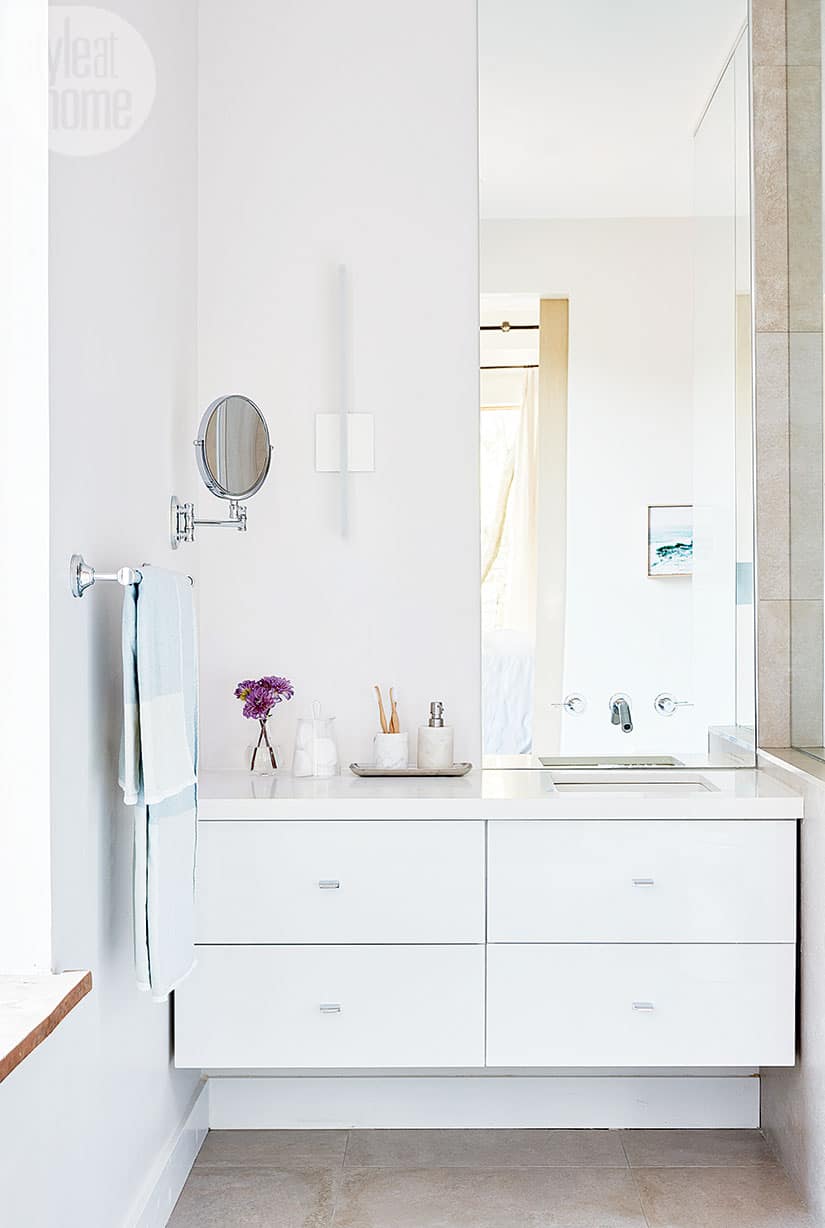 The master bathroom’s vanity takes advantage of the space’s relatively small footprint: The sink is placed to one side to increase counter space, and opting for drawers instead of cupboards maximizes storage. “The tall mirror covering half the wall emphasizes the ceiling height and makes an unexpected statement,” adds Jacquelyn. 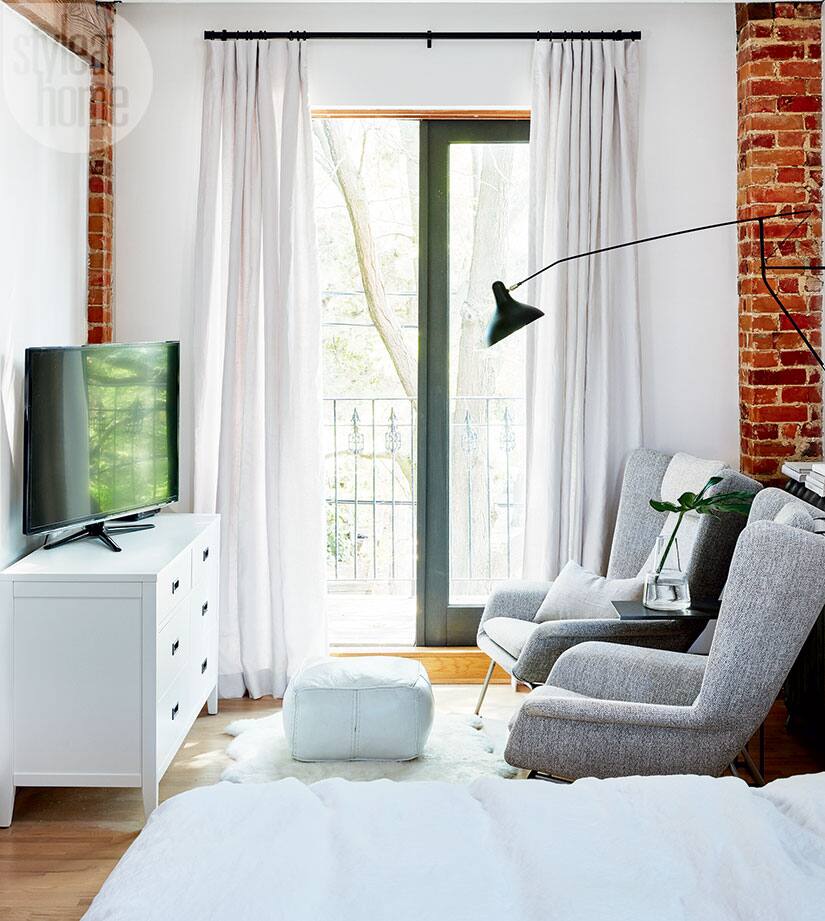 With its contemporary plush wingback chairs, the master bedroom’s sitting area is a perfect place for the couple to unwind in the evenings. The area is petite, so furniture serves double duty, like the dresser that also holds the TV. 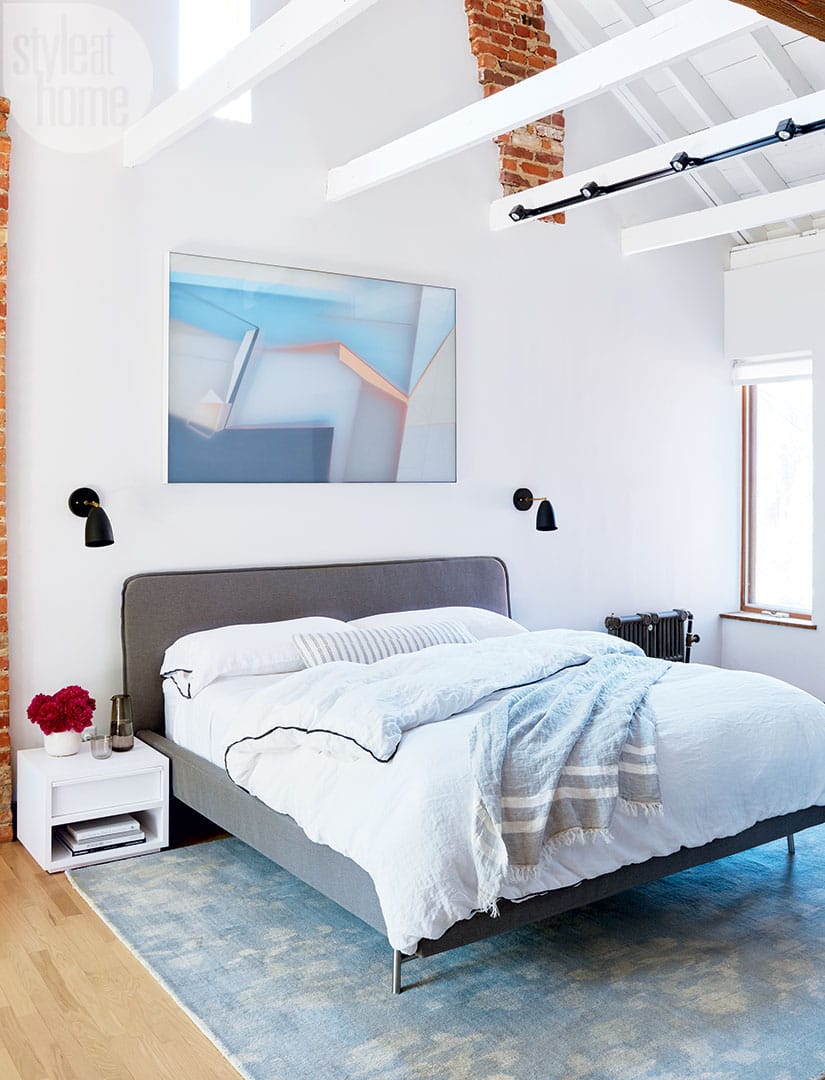 The double-height master bedroom was brightened by painting the dark wood ceiling and beams a sophisticated greyish white. Watery blue elements and simple, clean-lined furnishings give the space a serene, subdued look that enhances its grandeur.