Share
Share
Just one bite is all it takes to be seduced by crisp, juicy, sweet-tart apple recipes. And when they’re combined with heady spices, flaky pastry and sugary sauces, the flavour explosion seals their fate as the fruit of earthly delights. There’s definitely a reason that apples have been a cooking – and eating – staple for thousands of years. Just ask Adam and Eve. 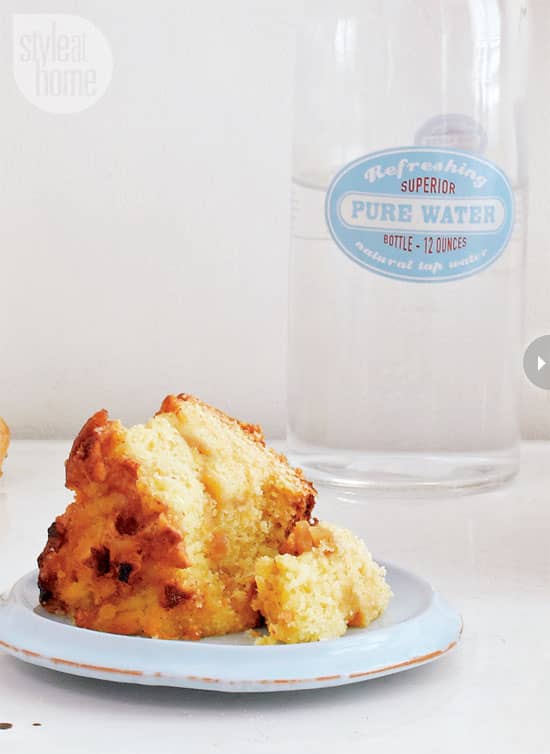 Directions
1 Preheat the oven to 350°F. Grease and flour a 9" fluted cake pan; set aside. Stir together the sugar and cinnamon in a large bowl; add the apples and toss to coat. Set aside.

2 In another large bowl, sift together the flour, baking powder and salt. In a smaller bowl, whisk together the oil, apple sauce, sugar, orange juice and vanilla seeds.

3 Pour the wet baking ingredients over the dry and stir to combine (the mixture will be thick). Add the eggs, one at a time, stirring well after each addition. Pour half of the batter into the prepared cake pan. Spread half of the apple mixture over the top. 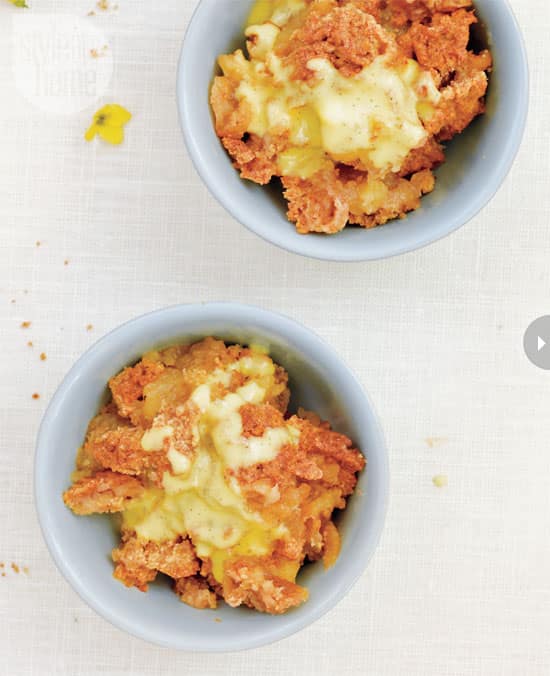 Directions
1 Preheat the oven to 375°F. Stir the apples and lemon juice together in a baking dish. Sprinkle with the sugar and cinnamon; toss to combine. Bake the apples for 30 minutes.

2 Meanwhile, prepare the topping. Stir together the brown sugar, oats, flour, salt and cinnamon in a large bowl. Using your fingertips, blend the butter into the mixture until it forms pea-sized lumps. Stir in the pecans.

3 Remove the dish from the oven and sprinkle the brown sugar topping over the apples. Return the dish to the oven for an additional 30 minutes. Serve the crumble warm with ice cream. 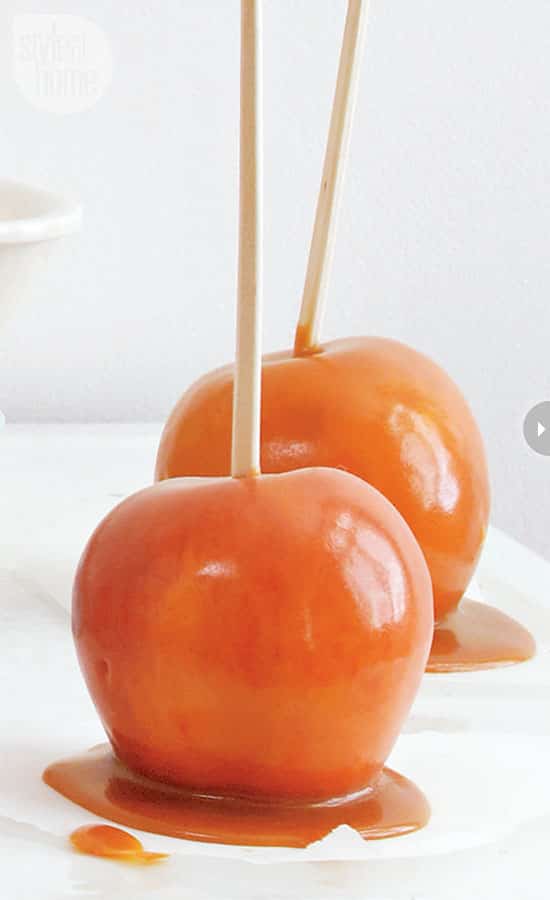 Directions
1 Line a rimmed baking sheet with parchment paper. Insert a wooden stick into the top of each apple; set on the baking sheet and place in the refrigerator while preparing the caramel.

2 In a large saucepan over medium-high heat, melt together the brown sugar and granulated sugar, the butter, whipping cream, corn syrup and salt. Stirring frequently, bring to a boil.

3 Reduce the heat to medium and cook, stirring often, for 18 to 20 minutes, or until the temperature reaches 230°F on a candy thermometer (the caramel will thicken and darken in colour). Remove from the heat and stir in the vanilla. Allow the caramel to cool for 5 minutes. 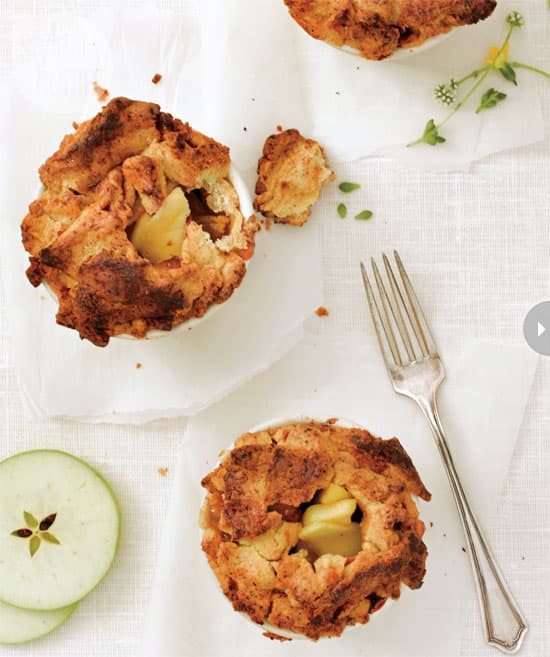 Directions
1 To make the crust, blend the flour, salt and sugar in a food processor until combined. Add the butter and pulse until the mixture resembles coarse meal.

2 With the processor running, slowly pour in the ice water, 1 tablespoon at a time, until the dough just comes together. Do not overprocess. Remove the dough from the processor and mix by hand until well blended.

3 Roll out the dough to ¼" thickness on a lightly floured surface. Cut six 6" circles from the dough. Set the remaining dough aside to decorate the tops of the pies as desired. Press each circle into the bottom and up the sides of a 4" ramekin.

4 Refrigerate until ready to fill. Preheat the oven to 425°F. For the filling, combine the apples, brown and granulated sugars, cinnamon, nutmeg and salt in a large bowl. Spoon the pie filling evenly into the prepared ramekins and top each pie with a cube of butter.

5 Cover with the remaining dough and decorate as desired. In a small bowl, whisk the egg yolk with 1 tablespoon water. Brush the tops of the pies with the egg wash. Bake for 16 to 18 minutes, or until juices begin to bubble. 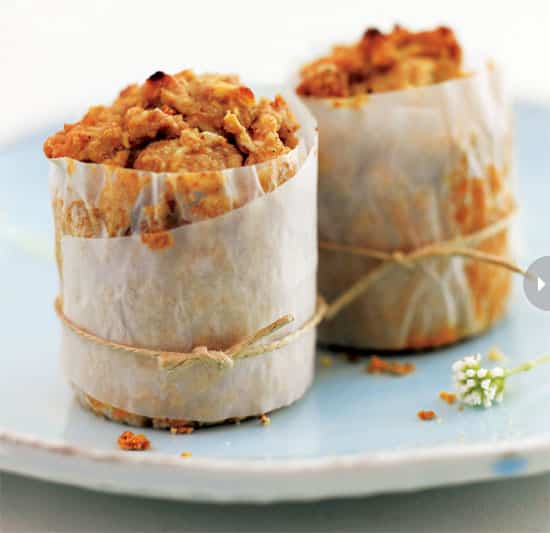 
Directions
1 Preheat the oven to 375°F. Combine the oats and yogurt in a medium bowl and let stand for 5 to 10 minutes. Whisk together the apple, eggs, milk, oil and vanilla in a separate bowl.

2 Add the apple mixture to the yogurt mixture and stir to blend. In a large bowl, sift together the flours, brown sugar, baking powder, baking soda, cinnamon, nutmeg and salt. Pour the yogurt mixture over the dry ingredients and sprinkle with the dried apricots.

3 Stir until just combined. Spoon the mixture into muffin cups or a greased muffin tin and bake for 35 minutes, until the tops are brown. 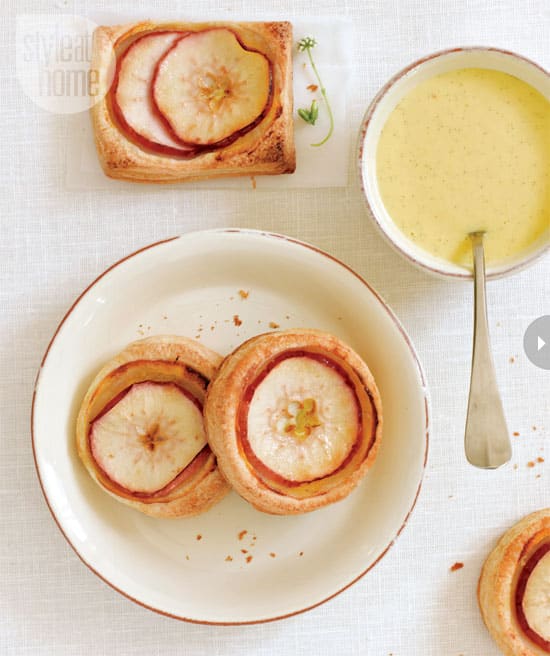 Directions
1 To prepare the filling, place the milk in a saucepan. Split the vanilla bean and add the seeds and pod into the milk. Bring the mixture to a simmer over low heat; remove the pan from the heat, cover and let infuse for 10 minutes.

2 Meanwhile, beat the egg yolks and the sugar in a medium bowl with an electric hand mixer until pale and frothy. Beat in the flour. Remove the vanilla bean pod from the milk and gradually whisk the milk into the egg mixture.

3 Pour the mixture back into the saucepan and return to the stovetop. Bring to a boil and cook for 1 minute. Remove the pan from the heat and carefully pour the egg mixture into a medium bowl; cover with plastic wrap; set aside to cool. When the mixture is cool, whip the cream and gently fold it into the egg mixture. While the filling is chilling, prepare the crust.

4 Unfold the defrosted puff pastry onto a lightly floured surface and cut into 8 rounds. Place the pastry rounds onto a baking sheet lined with parchment paper or a silicone mat. Using a large spatula, spread a thin layer of cream filling (about 1 heaping tablespoon for each) onto the pastry rounds, leaving a 1" border around the edges; refrigerate the pastries for about 15 minutes.

5 Preheat the oven to 400°F. Place the apples in a large bowl and toss with the sugar and cinnamon. Layer the apple pieces on top of the pastry rounds. Bake for 15 to 20 minutes, until the apples are browned and the pastry is puffed and golden. 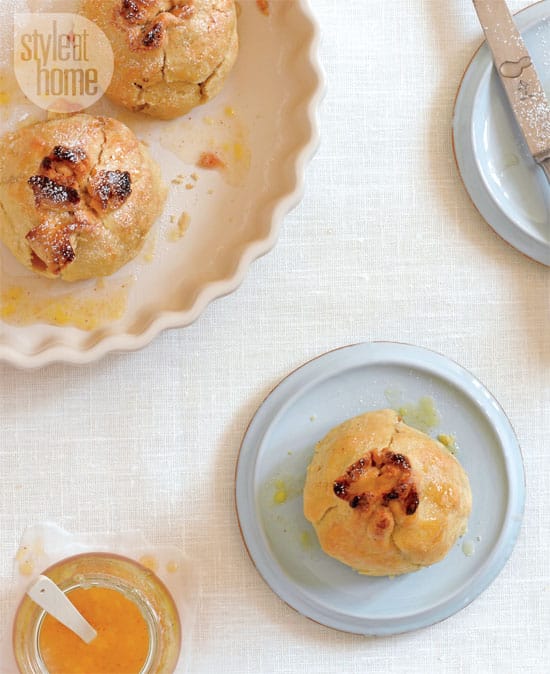 Directions
1 In a medium saucepan over medium-high heat, bring the sugar, water, cinnamon and nutmeg to a boil, stirring constantly. Reduce the heat to medium-low and let simmer for 10 minutes, stirring occasionally. Remove the saucepan from the heat and stir in ¼ cup butter. Set aside.

2 Preheat the oven to 375°F. Roll out the dough to ¼" thickness on a lightly floured surface. Cut eight 8" circles from the dough. Place 1 apple in the centre of each pastry circle. Sprinkle the apples evenly with the brown sugar and top each with 1 cube of butter.

3 Fold the dough up over the apples, pinching to seal. Place the dumplings in a lightly greased baking dish and drizzle with the syrup. Bake for 40 to 45 minutes, until the apples are soft and cooked through.