The modern, cohesive quality of Sharie and Patrick Hunter’s Calgary house may belie the fact that everything in it was collected over a long period of time. Even acquiring the house itself required a bit of patience on their part. Living right across the street, the couple – he is vice-president of North American sales for a pipeline maintenance company and she is a painter and the creative director at a graphic design company – fell in love with the house as they watched it being built from the ground up. Constructed by engineers-turned-homebuilders from 2006 to 2007, it was as solid as a bunker and featured an open layout, natural materials, clean lines, lots of windows and plenty of wall space meant for adding art (ideal for Sharie, who uses the house as a gallery for her large contemporary works). But when the couple expressed interest, they discovered it had already been sold. “So for a year, we watched other people live in our house!” says Patrick. 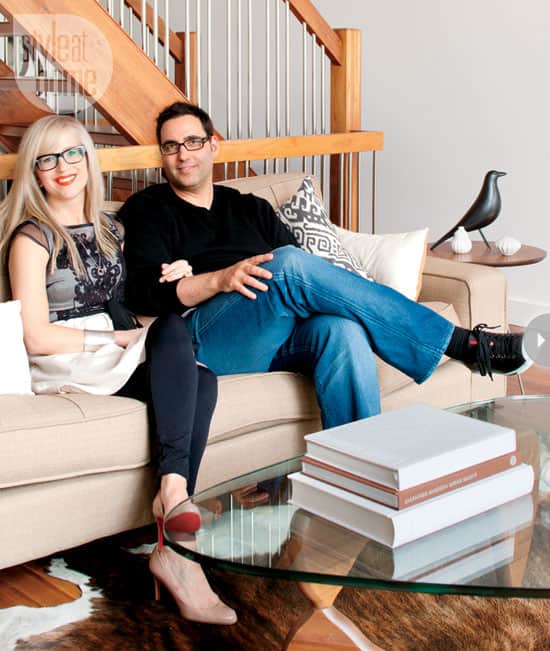 The Hunters
Homeowners Sharie and Patrick Hunter dig deep into their Prairie roots and love of collecting Mid-Century Modern pieces to create a space that clearly speaks to their passions. The result is a house that’s full of rich tales and family history, giving any visitor plenty to write home about. 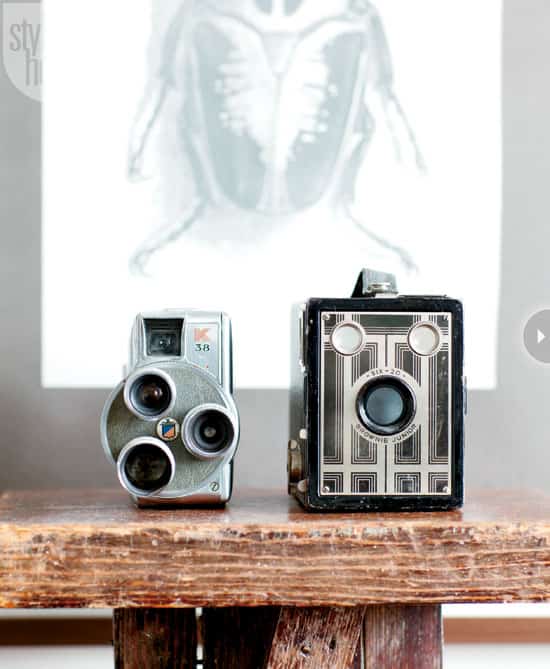 Old film camera
In the master bedroom, a little wooden table displays an old Super 8 mm film camera and a Brownie from homeowner Sharie Hunter’s large camera collection. “The little table is from a church my grandfather built out in the Prairies, where I grew up,” says Sharie. 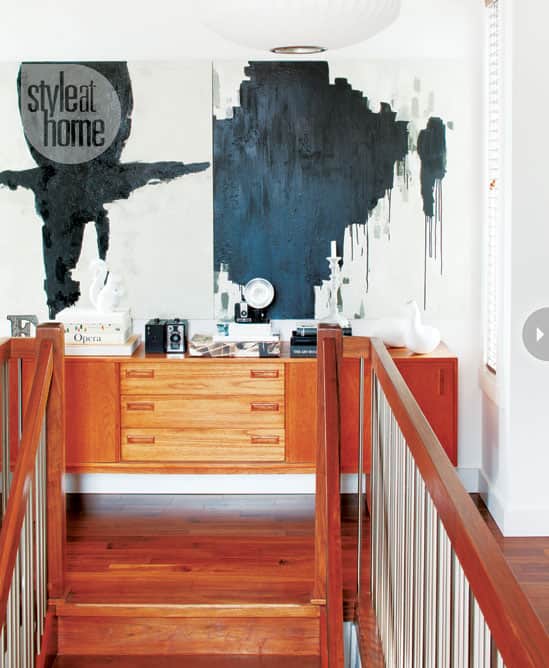 Credenza
A Mid-Century Modern credenza, which Sharie found at a thrift store in Medicine Hat, Alta., creates a strong focal point at the top of the staircase on the third floor when decorated with the couple’s collections and paired with Sharie’s artwork. 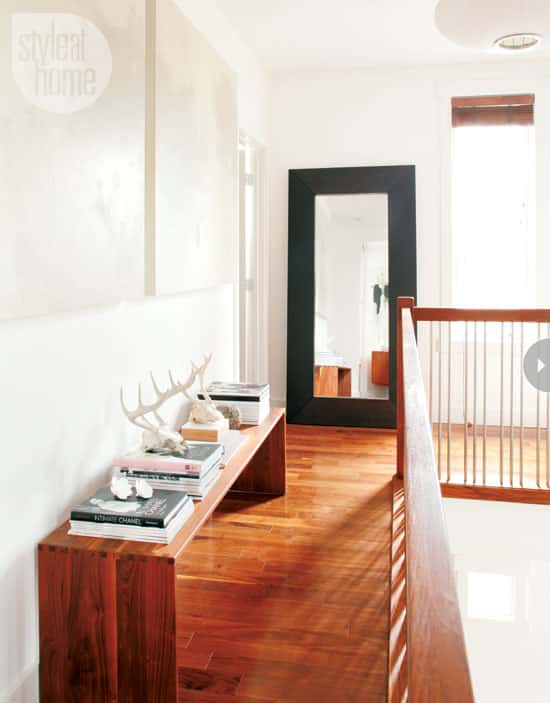 Streamlined bench
The upstairs hallway gives Sharie another place to hang her artwork, and a streamlined bench is a stylish storage solution for magazines and books. 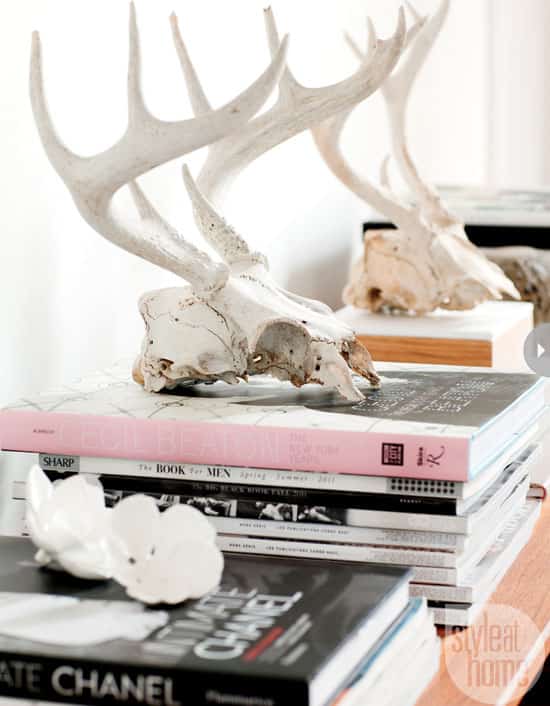 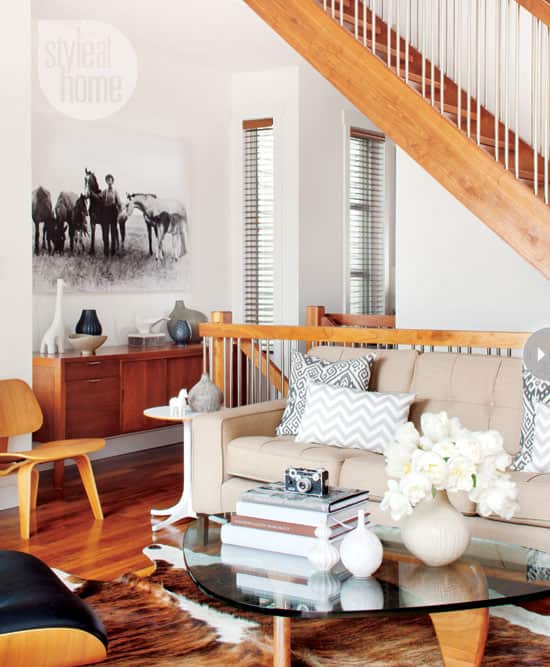 Mid-century modern living room
The living room furniture and accessories showcases the couple’s neutral colour scheme and a love of Mid-Century Modern design. Hanging above the credenza, a black and white photo taken in 1903, which Sharie enlarged and mounted on a wood canvas, represents her ancestors’ prairie life. “My great-grandfather bought land from this gentleman [in the photo],” she says. “He’s just out there with his horses in the prairies with nothing but starkness all around him, and I just thought the rawness of this photograph was beautiful.” 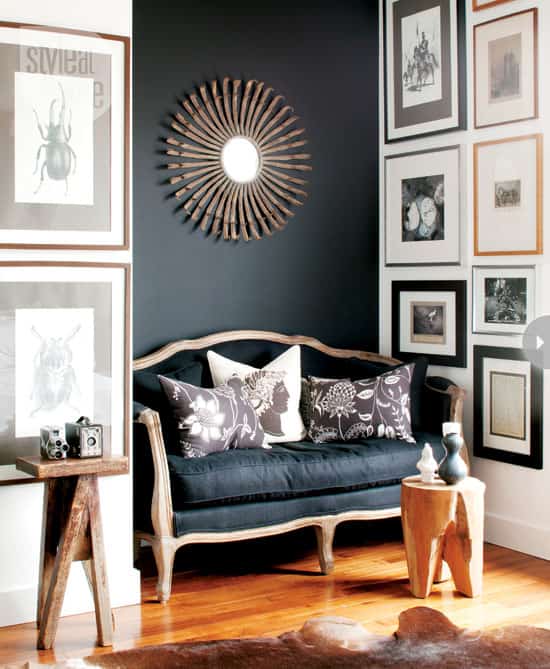 Black settee
A black linen-covered settee, with its curvaceous, feminine lines, has a softening effect in the master bedroom, and the mirror adds a bit of glamour. The chalkboard-painted focal wall lends a sense of balance and anchors the light-filled space. 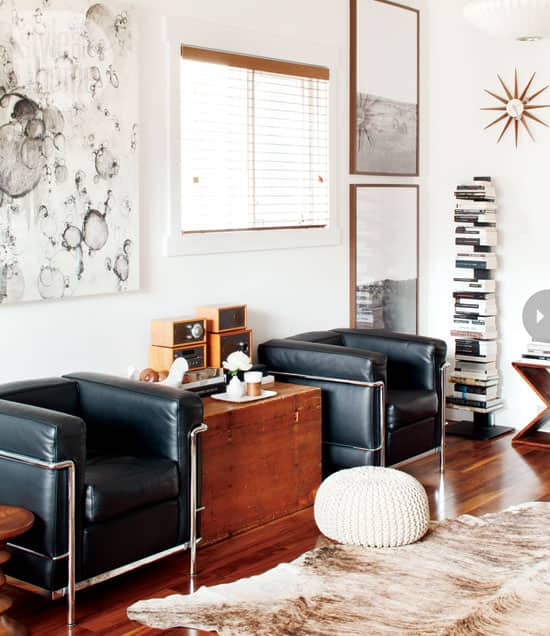 A touch of farmhouse-inspiration
The kitchen’s “chill-out area” exemplifies the house’s mix of Mid-Century Modern and farmhouse: Two Le Corbusier chairs are paired with a time-worn wooden trunk from Sharie’s family farm. 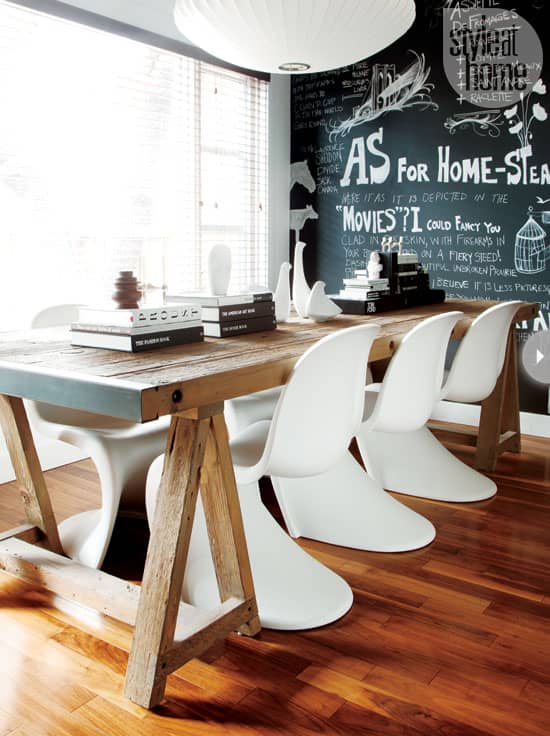 Mid-century modern kitchen
Inspired by the French bistro look the couple saw in Paris, the kitchen’s eating area features a rustic farmhouse table surrounded by iconic Panton chairs (four of which were brought back from Switzerland about 10 years ago). The chalkboard wall, which Sharie painstakingly personalized, depicts a cheese recipe, a Shakespearean poem about wine and a paragraph from a love letter written in 1913. 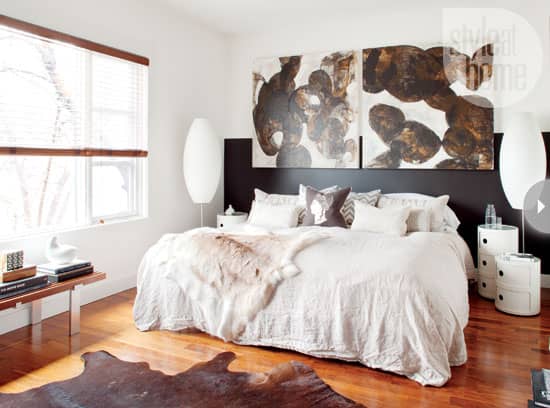 Mid-century modern bedroom
Often inspired by what they see on their travels, Sharie and Patrick sketched out their bedroom decorating ideas in a restaurant in London. “We were in a bistro and got part of the inspiration from that,” says Patrick. Instead of incorporating typical nightstands with great table lamps, the couple paired Nelson floor lamps with iconic Componibili modules. 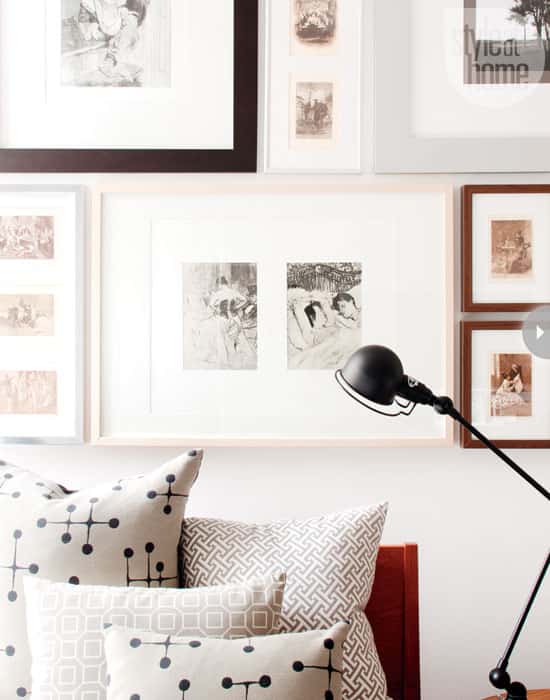 Fabrics
The couple’s travels always include a day of shopping for fabrics, which Sharie brings home and makes into throw pillows for a quick way to change the house’s look. Here, the black and grey Eames printed fabric and other geometric patterned fabrics liven up the guest bedroom. 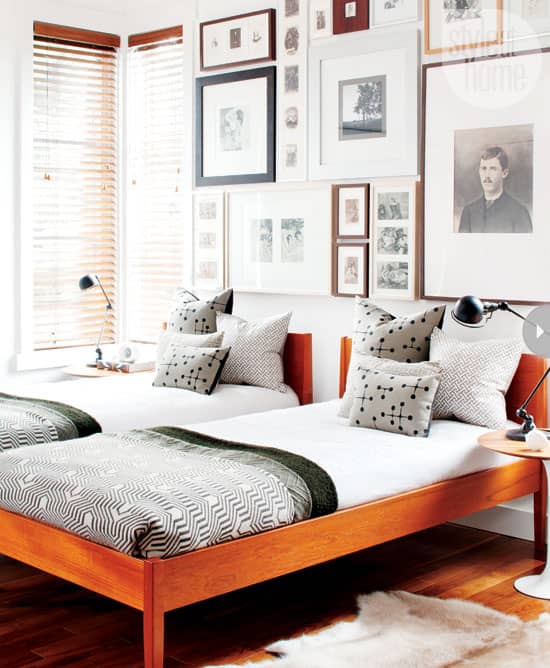 Mid-century modern guest bedroom
The guest bedroom’s Mid-Century Modern twin beds, which Sharie found at a garage sale for $25 each, accommodate the couple’s parents or Patrick’s visiting children. A collection of art includes etchings brought back from Europe, sketches done by Sharie and a charcoal drawing of the man who, in his will, left all his belongings to Sharie’s grandmother. 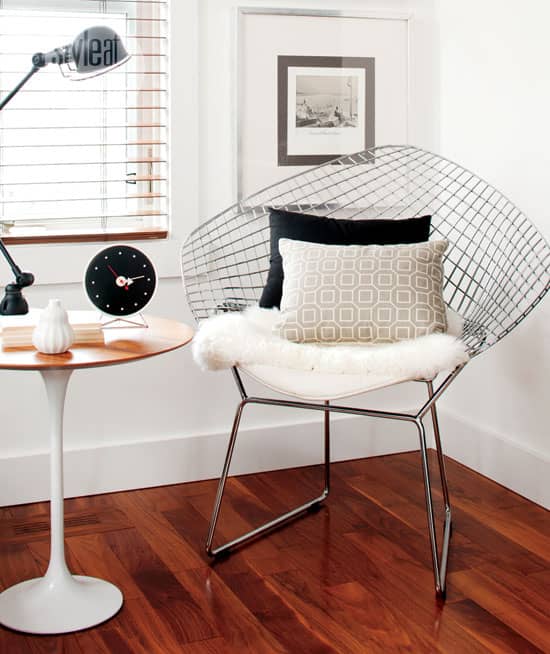