When architect David Lopes bought his Charlottetown century home in 2006, it was dark, dingy and in a sad state of disrepair. However, his trained eye saw not only the stately architecture buried beneath the wood panelling and old-fashioned wallpaper, but also a way to marry the old with the new. It took a lot of sweat and strain, and now the result of a two-year renovation is a bright home that reflects a respect for the past and a welcoming of the present. 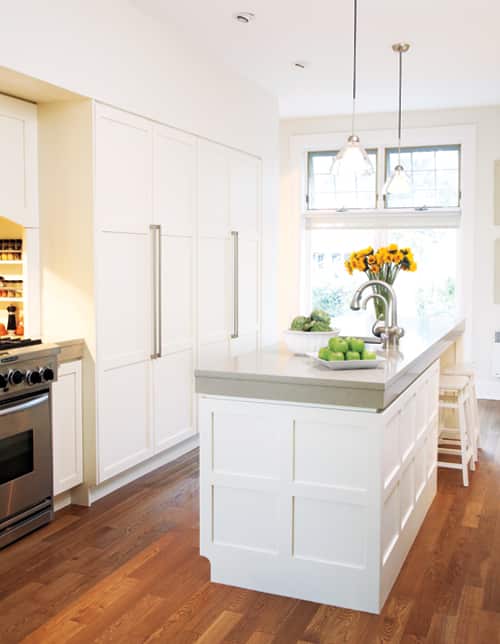 Stage 1: The kitchen
Before installing new appliances, cabinets and fixtures, an entire wall was removed to open up the kitchen to the dining room, thus improving circulation and increasing light. But that also created a problem: most of the kitchen – and its perpetual mess – would be on full view. The solution? "We decided to conceal as much of the kitchen as possible behind full-height panel doors," says homeowner and architect David Lopes. "Think of a TV cabinet where the doors open and slide back into the unit." Most of the drawers and even the fridge are concealed behind the doors, resulting in a clean, contemporary look. 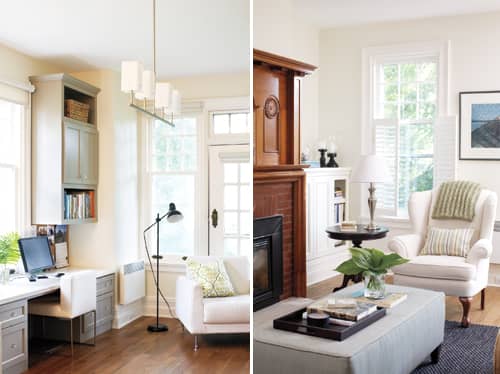 Stage 2: Home office and living space
Hardwood was laid throughout the entire main floor, harmonizing rooms that, thanks to the removal of a couple of dividing walls, now flow more breezily from one to the other. "We installed prefinished flooring, which spared us a little dust," says David. The next step was to lighten the vertical surfaces. Painting the dark wood wainscotting – a trademark of traditional homes – was a daring move, but one David was sure would make a dramatic difference to the main-floor living space, which also houses his home office. He first painted on a special primer, a shellac that hides stains and seals the wood, then gave the dark wood two coats of a bright white paint, giving the rooms a much more spacious feel. The rest of the wall space was painted a subtle off-white to create a simple, minimalist statement. 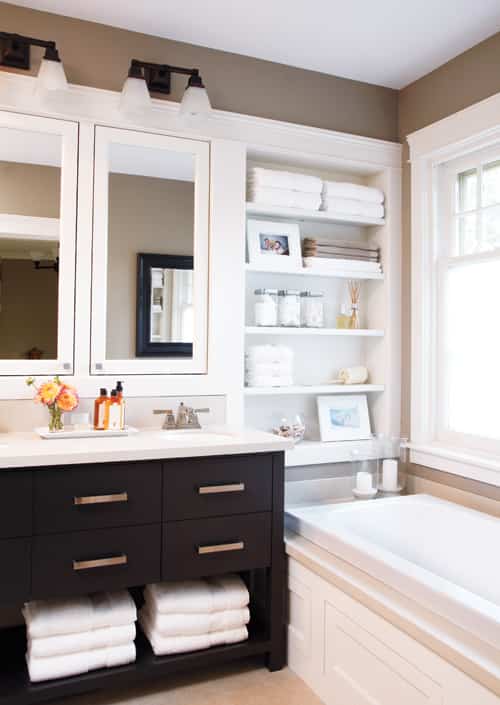 Stage 3: Bathroom
In the original layout, an old servant's staircase connected the kitchen to the second floor. Removing it allowed David to increase the square footage of the bathroom – a must since he insisted on two sinks "to keep sibling squabbles to a minimum!" Recessed shelving was added to create clean, open, modern storage. To achieve this look, David also had to redesign and replumb the room, moving the toilet, bath and vanity. Levelling the floors meant ripping up the old flooring, which provided an opportunity to install in-floor radiant heating, a luxurious amenity. "We decided to use the same colour of tile throughout the bathroom, so it would appear more spacious," says David. 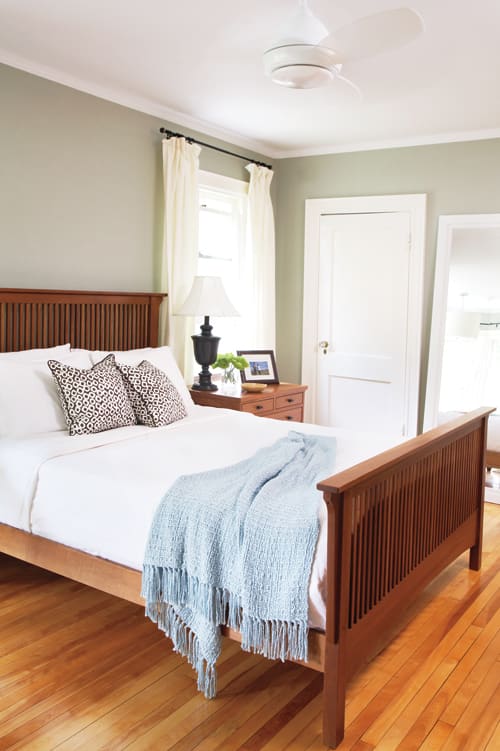 Stage 4: Bedroom
Although the home's master bedroom is simple and modern in design, David incorporated decorating elements that reflect the history of the structure. The Charles Rennie Mackintosh-style bed is a nod to the Arts and Crafts movement that inspired part of the home's design. The existing bay window is dressed with long draperies that puddle on the floor, enhancing the grandeur of the high ceilings, which aren't often featured in newer homes.Architect David Lopes' secrets to renovating success.

Take your time in the design phase. It's important to live in a house for a while before renovating, so you can walk through your design. Take note of routines, high-traffic areas and where the best natural light comes from.

Don't be afraid to ask a lot of questions. Ask contractors, designers, electricians -- whomever. Sometimes the most innocent question can lead to uncovering very important issues.

Always have a design drawing. Or at the very least have a list that you can use to work out an agreement with your builder. That will help reduce areas of future conflict and cost overruns.

Don't get stuck on perfection. There will always be something that you would do differently next time.