It’s hard to find a historic country home that suits your lifestyle and personality perfectly – especially if you’re partial to open, industrial city lofts. So this homeowner grabbed “history” by its proverbial horns and created his space from scratch, imparting a purposeful patina through furniture and finishes while maintaining its modern-day essence.

Jean Longpré realized he’d achieved his architectural goal while his home was still under construction. “A friend of the contractor dropped by,” Jean recalls. “He looked around the building and asked, ‘What was this before?’” In fact, the house, which sits on nine acres in the Quebec countryside near Lake Memphrémagog and the U.S. border, is a new structure, built from the ground up 13 years ago. “I had always imagined renovating a house that had history, but I ended up creating one from scratch to make it look as if I had revamped an old dwelling,” he says. And it worked: People often think the building, with its loft-style interior, is a converted schoolhouse. 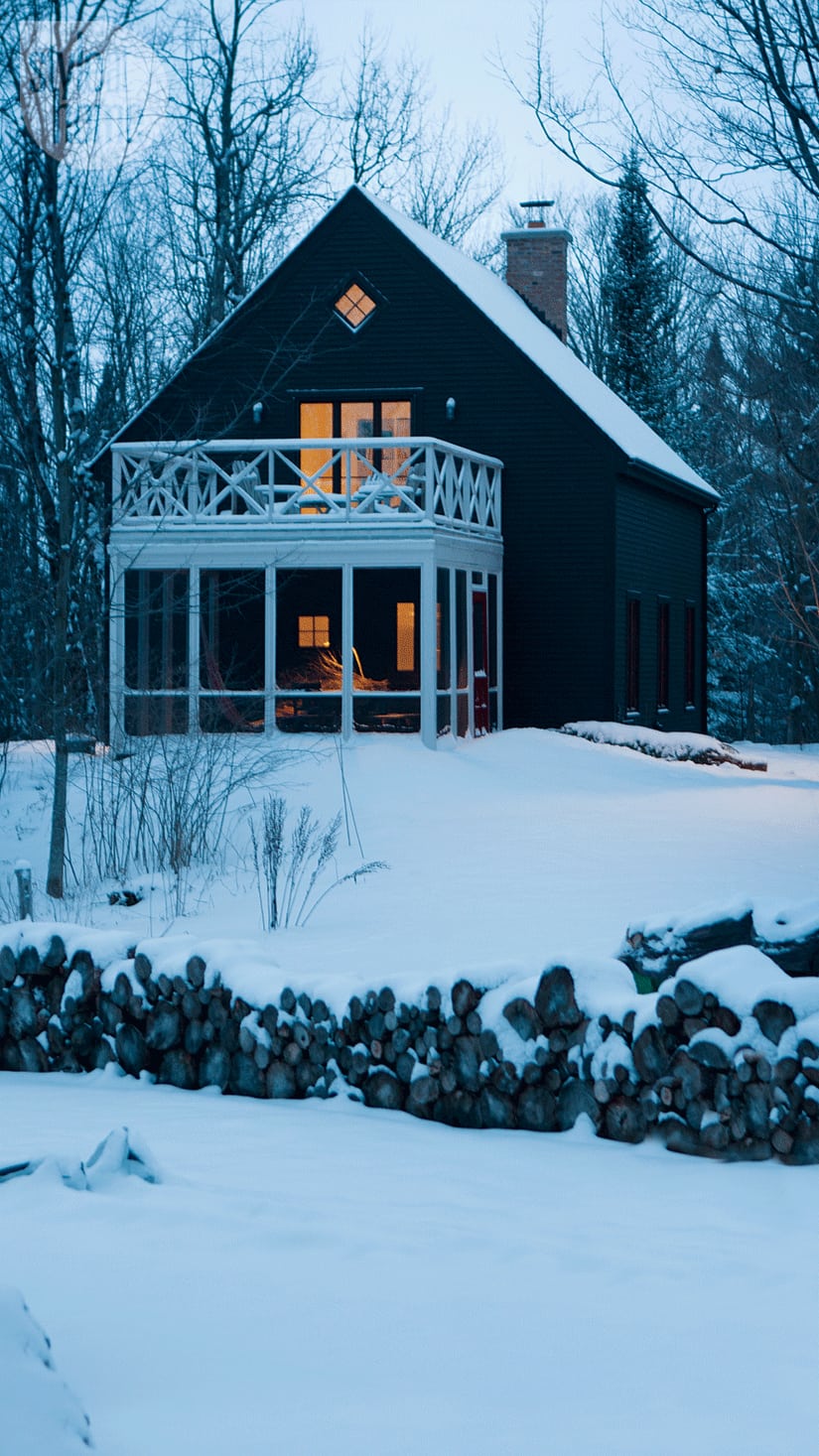 A professional photographer who maintains a pied-à-terre in Montreal as his studio, Jean loves the urban loft look and sought to import that style to the country when he built the historic-looking house. “I also wanted to have the kind of home you’d find in the south of France, where you’d have the same brick floors indoors and out,” he says, “so we used old bricks reclaimed from a demolished church in Sherbrooke.” The heated herringbone-patterned floors are, says Jean, surprisingly easy to keep clean, requiring only vacuuming. “If I spill a glass of water on the floor, it absorbs in 30 seconds,” he says. The same bricks were used to build the fireplace, which has no raised hearth. “I wanted it to be flush with the floor like in Europe,” he says.

The house’s footprint measures a modest 24 by 30 feet but, because the interior is entirely open, it feels large, with the living room, dining area and kitchen occupying the ground-floor space. A steel staircase leads to the open-concept master bedroom and bath. “I’ve never liked walls,” says Jean with a laugh. “I’m used to living in lofts.”

Rusticity is also reflected in the furnishings. While the oversized armchair in the living room offers a plush place to sit, it’s teamed with weathered wooden Adirondack chairs and hide rugs. The coffee table was a butcher-block table that one of Jean’s friends, a fellow photographer, had in his studio. “I persuaded him to sell it to me,” says Jean, “and sawed down the legs myself.”

In the kitchen, white beadboard cabinetry is topped with stainless steel countertops for a French bistro look; the wood-topped island and brick floors, however, make it feel quintessentially country. It’s no wonder that Jean spends as much time as he can at his country home (“Whenever I’m not working, I’m here,” he says). If we had a historic-looking new home imbued with French-country style and modern industrial flair, we would be, too. 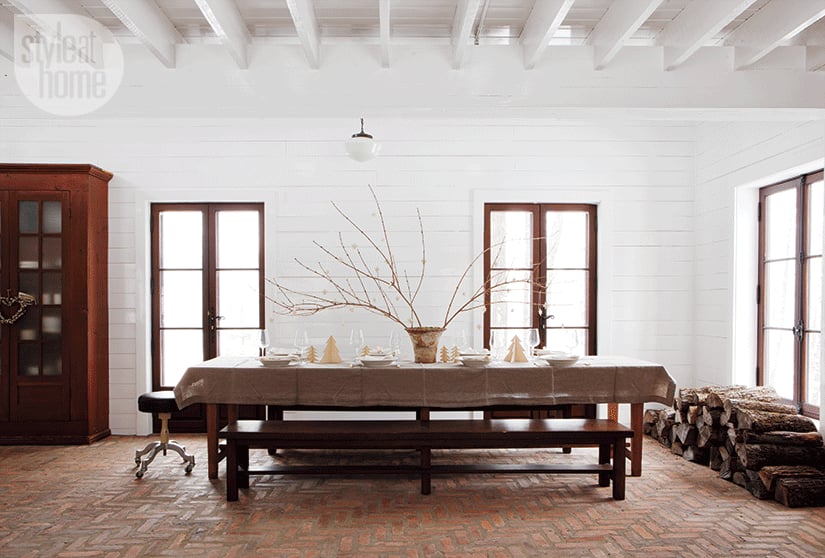 The oak dining table was found in a local antiques store, but homeowner Jean Longpré designed the accompanying five-seater benches himself. The French doors lead to an outdoor patio that works as an extension of the indoor living space because it’s made of the same bricks as the interior floors. 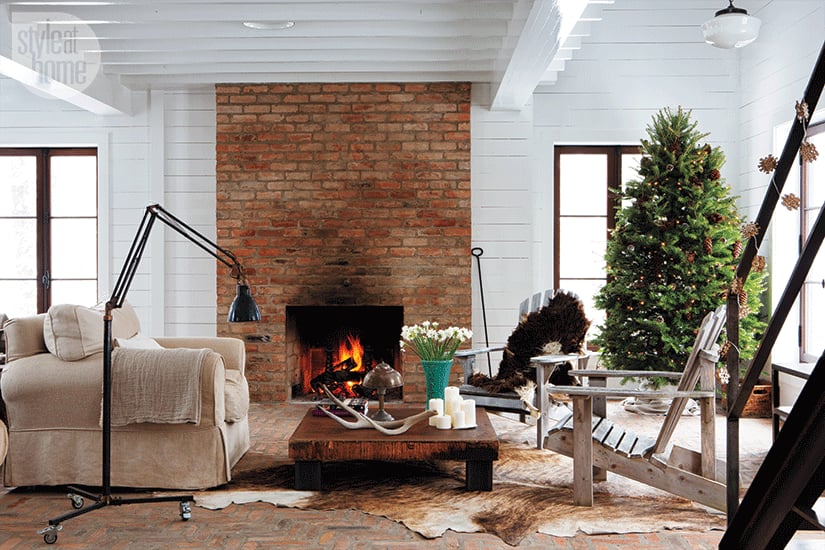 Throughout the home, interior walls are clad in horizontal pine planks, modernized with glossy white paint, and the ceiling beams are exposed for a loft-like feel. The living room fireplace, with its floor-to-ceiling surround, features the same bricks used on the floor and outdoor patio. 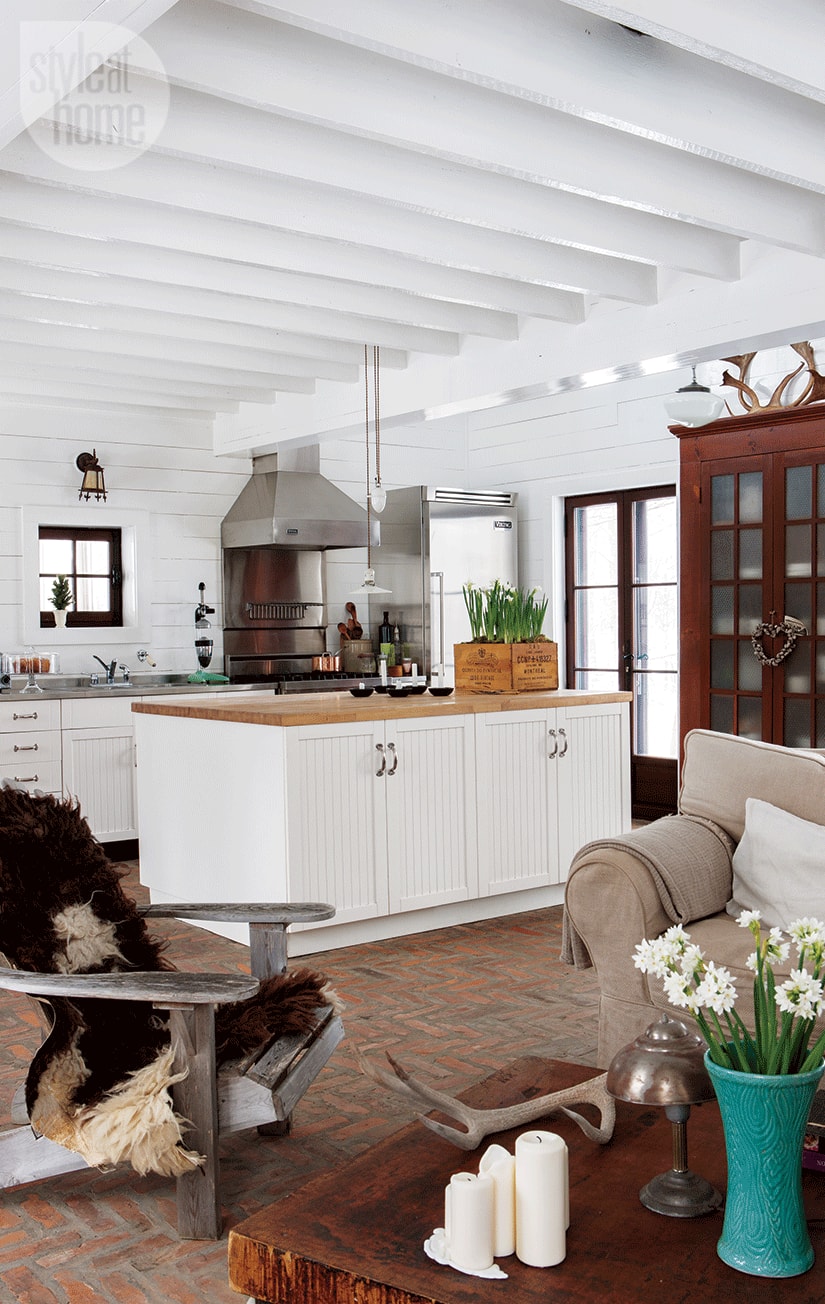 The open-concept space is dominated by an imposing eight-foot-tall armoire, found in a local antiques store. “It’s from an old hospital in Magog,” says Jean, adding that it was probably an apothecary cabinet. 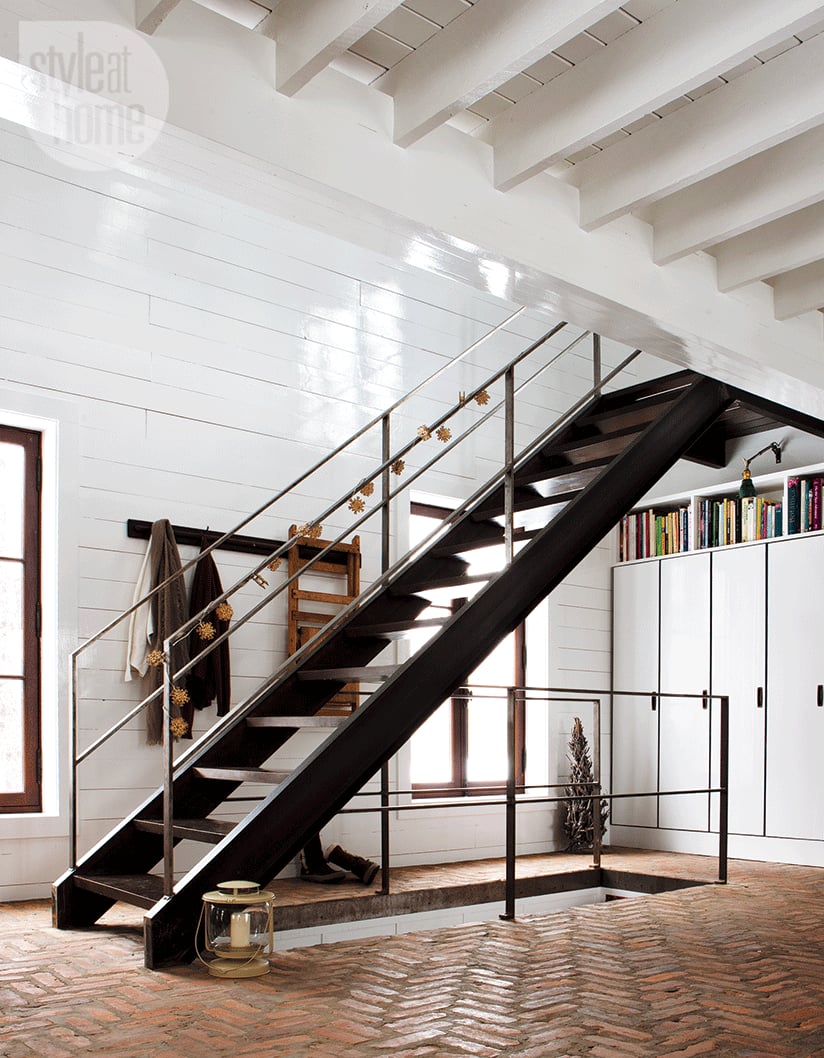 “I like industrial-style things that age organically,” says Jean, who is accustomed to inhabiting urban lofts. The reclaimed brick flooring and the steel staircase, with its open risers, are reminiscent of old warehouses. 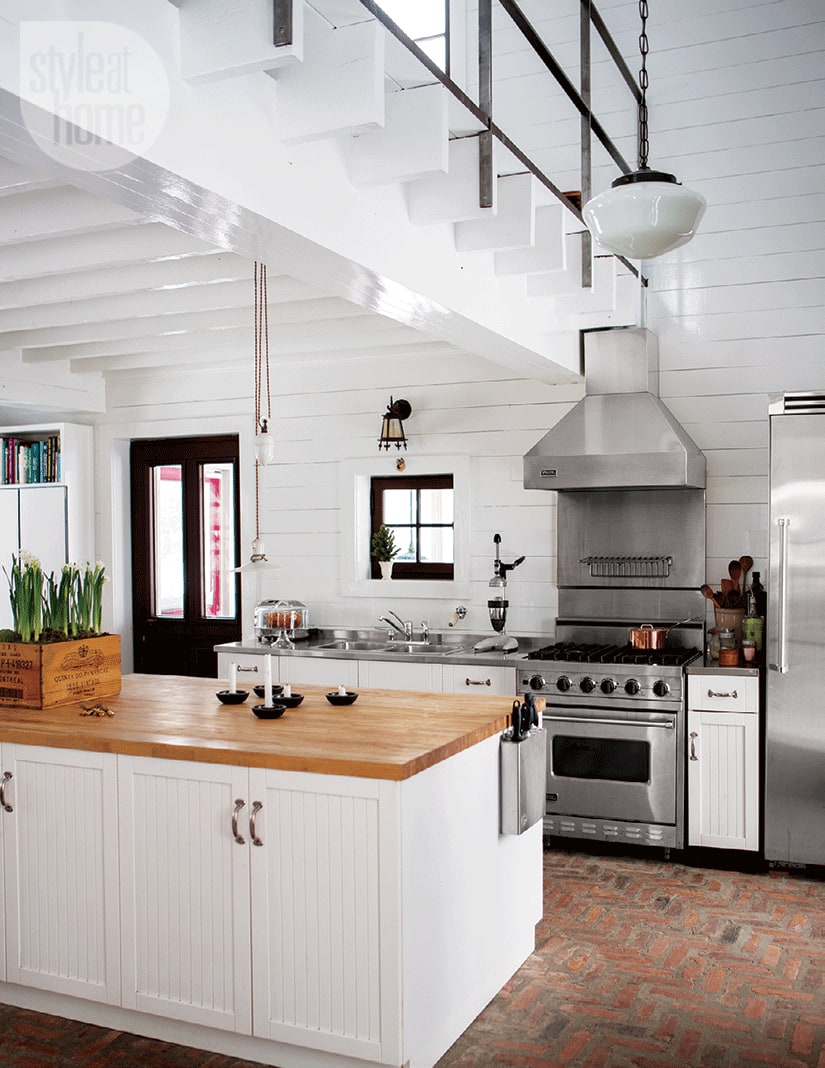 Beadboard cabinetry lends the kitchen a country flavour, as does the butcher block-topped island. The other countertop is stainless steel to harmonize with the chef-style appliances and tie in the industrial-chic look. 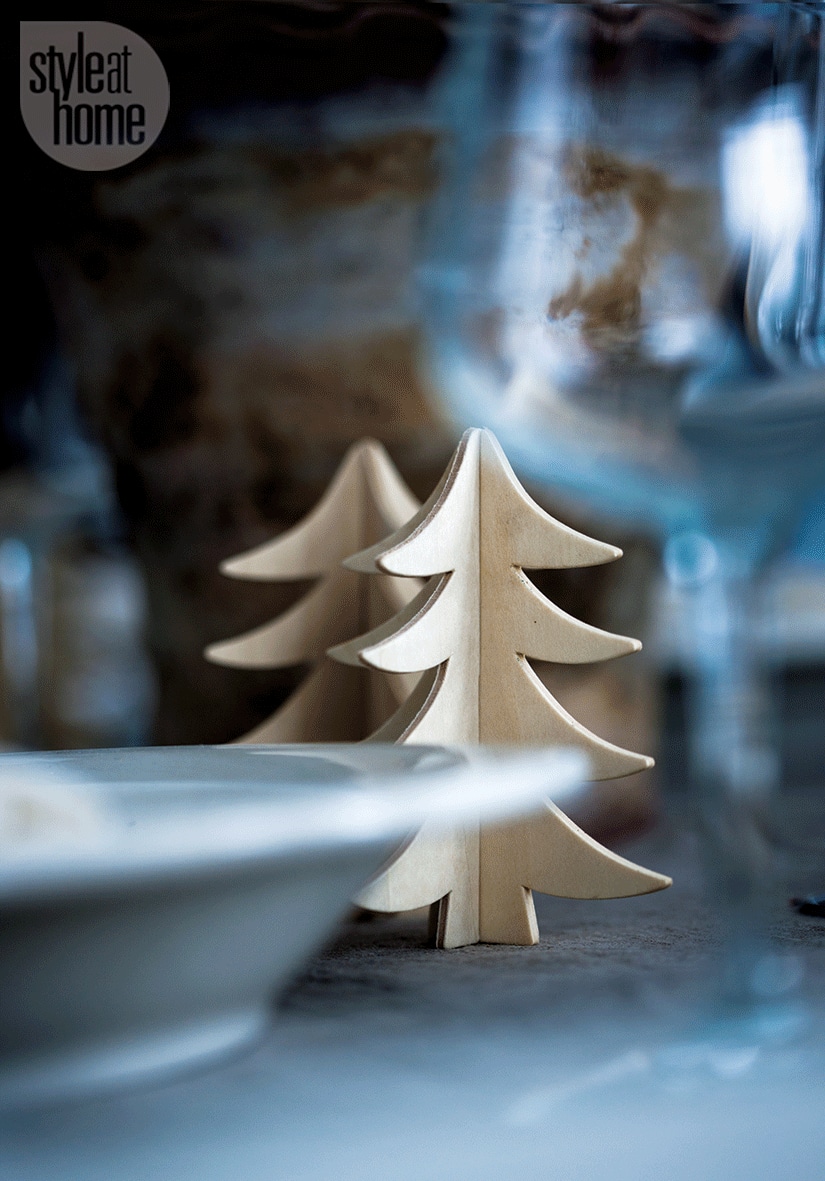 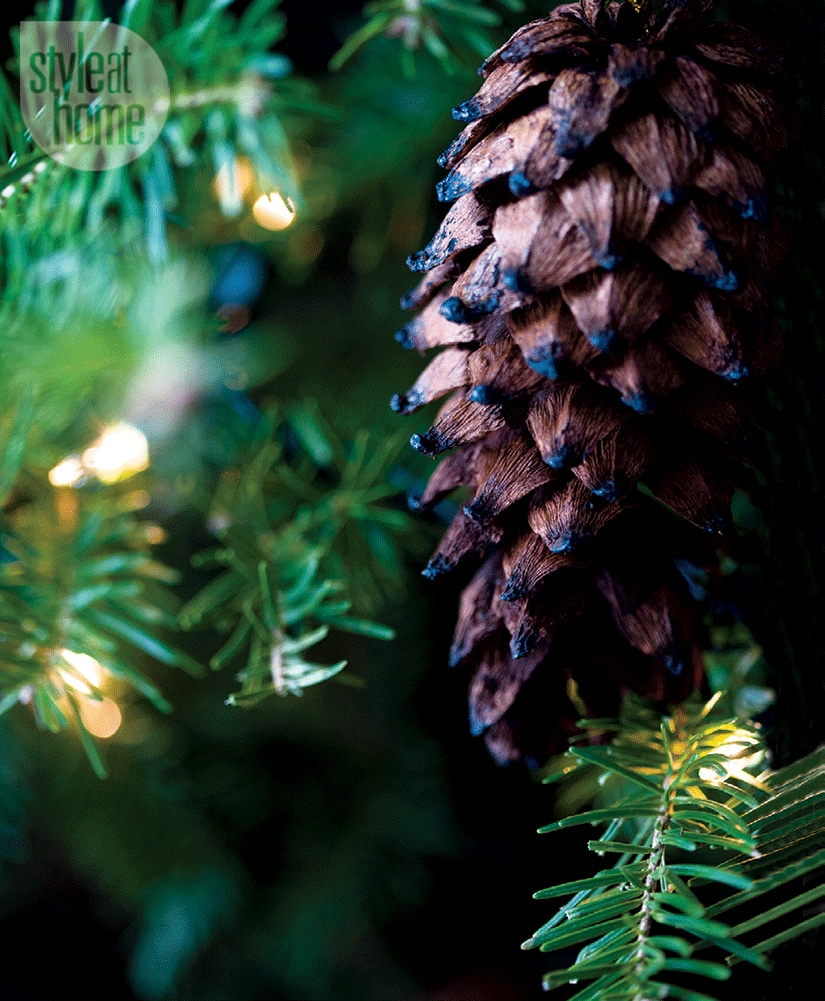 An industrial-style Quebec cabin is given the holiday treatment