After a cross-country move and a huge renovation, designer Erica Cook and her five boys can finally call their house a home.

Anyone who’s lived through a major home renovation can attest that it’s a stressful experience, but homeowner Erica Cook’s story takes the cake. Six years ago, having recently relocated from Toronto to Calgary, she was in the midst of a huge renovation of her 2,487-square-foot home while pregnant with her fifth son. When the 1950s home was purchased, “It was a real peach,” says Erica with a laugh. It was riddled with 1980s country-style honey oak cabinets, stencilled accents and a cramped kitchen. But Erica, a designer who worked at Toronto’s Sarah Richardson Design right before moving west, saw plenty of potential behind the dated decor. 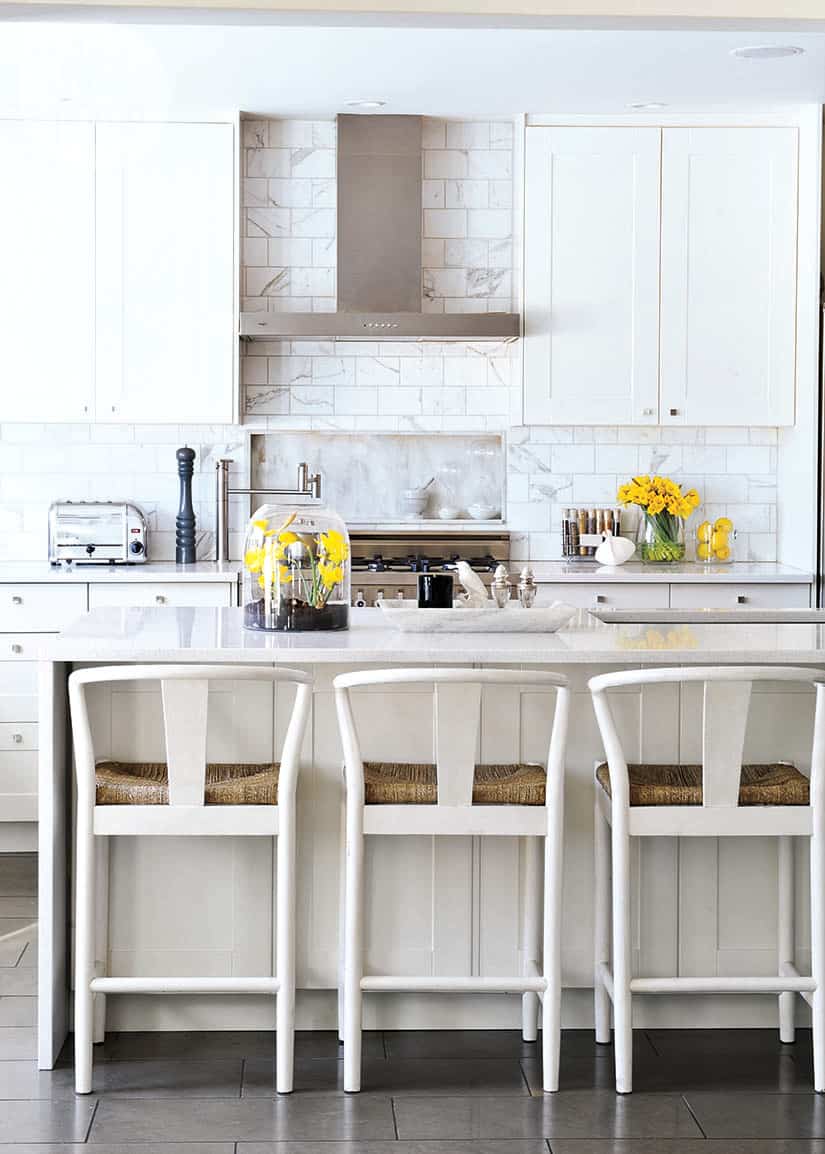 Erica designed the new kitchen using IKEA cabinetry and durable quartz countertops in an all-white palette. Carrara marble subway tiles, running from counter to ceiling, create a dramatic backsplash. The kitchen island can seat up to six at a time. 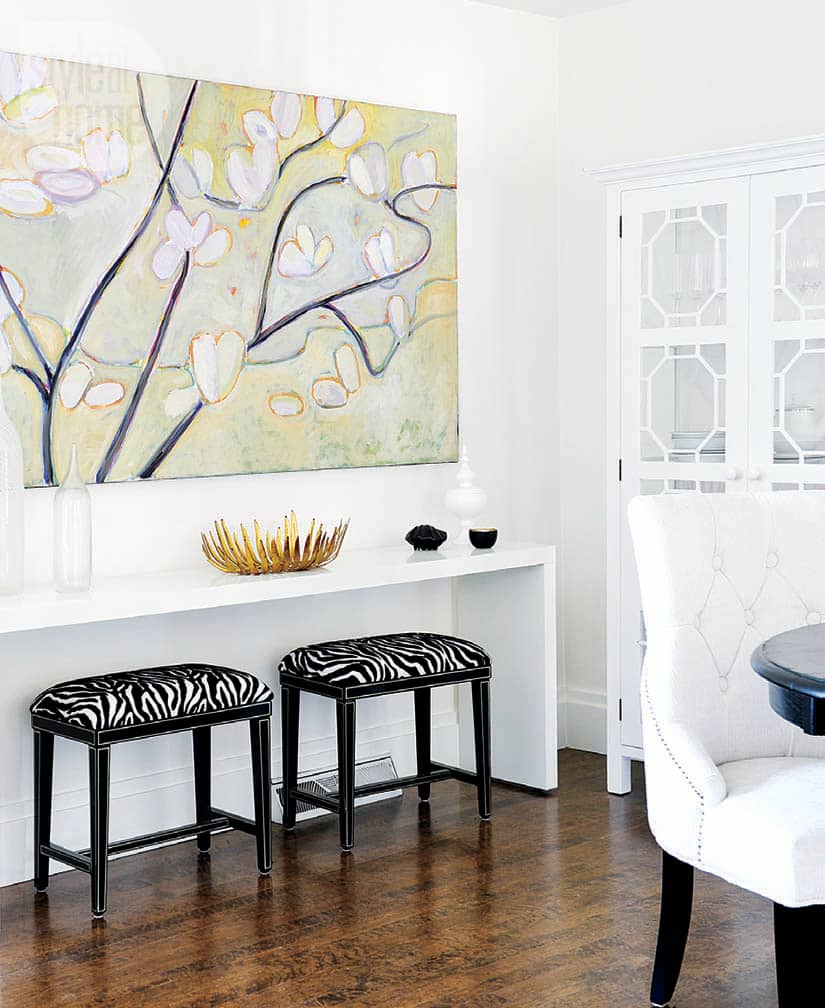 One end of the long living room has become a dining area with the addition of a round dining table and chairs. The artwork by Toronto artist Sharon Barr is a focal point in the space. 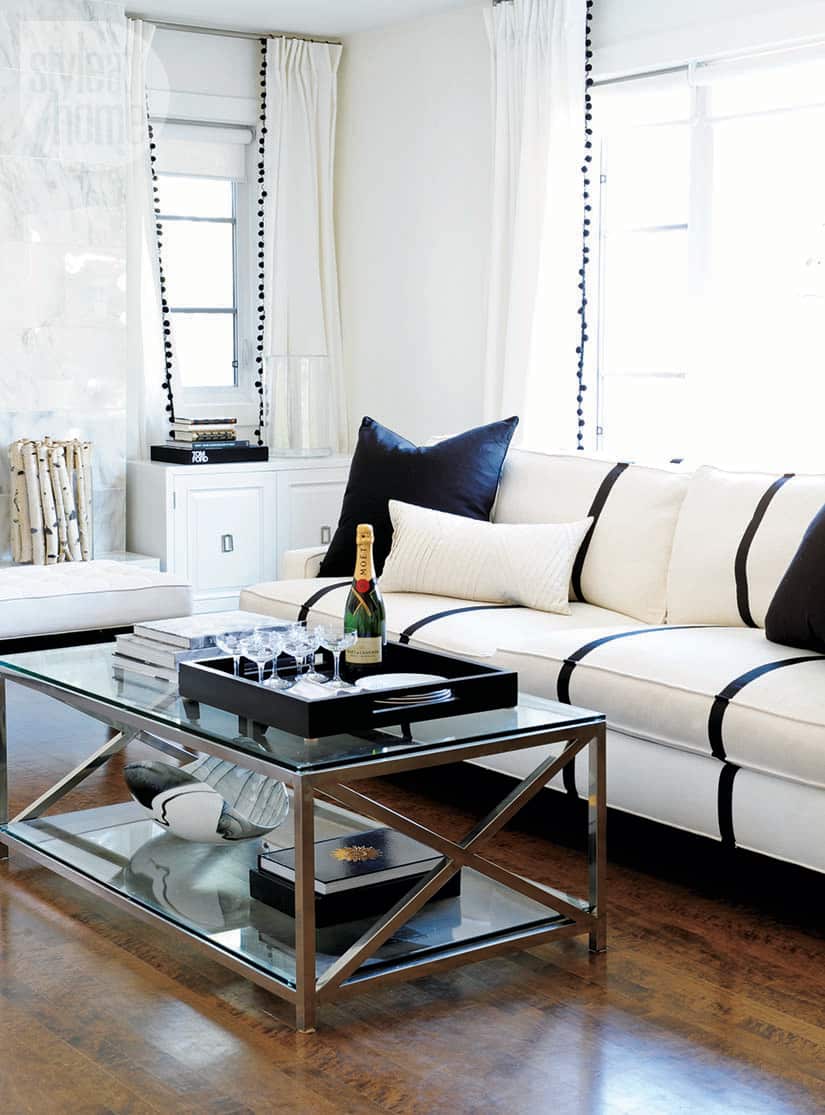 In the sophisticated living room, Erica used a hot glue gun, black grosgrain ribbon and black pompom trim to jazz up the simple cream sofa and the inexpensive drapery panels. 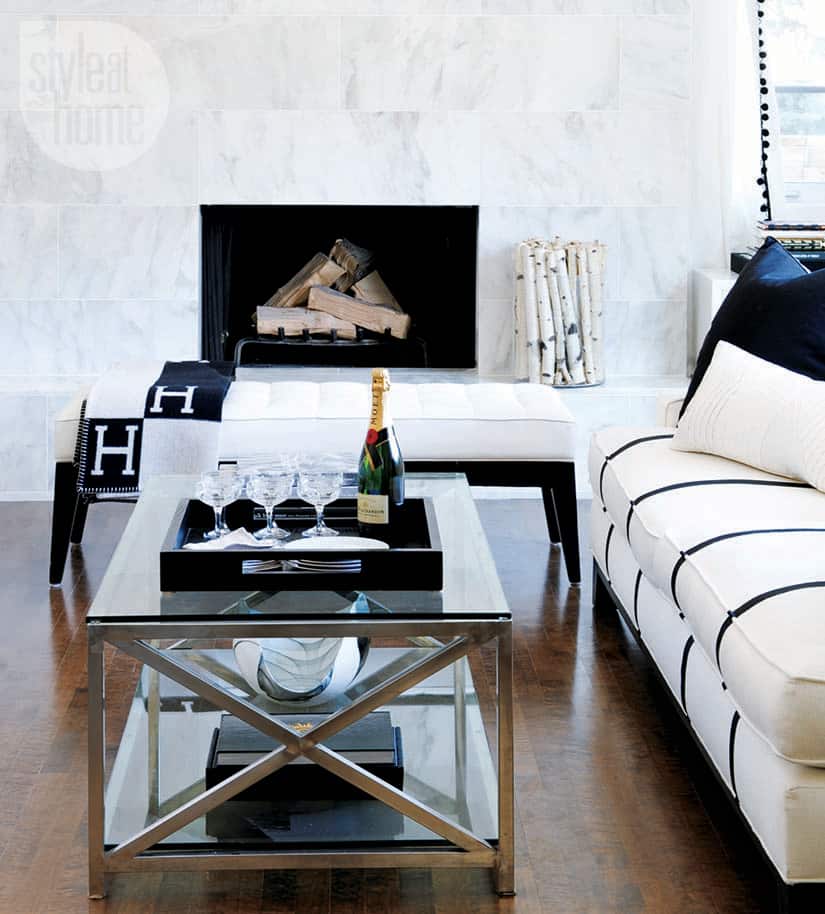 The living room’s fireplace was refaced in marble tiles that Erica found for a song. As for how she keeps such a pristine room looking great with five boys? “No one goes in there!” she admits with a laugh. 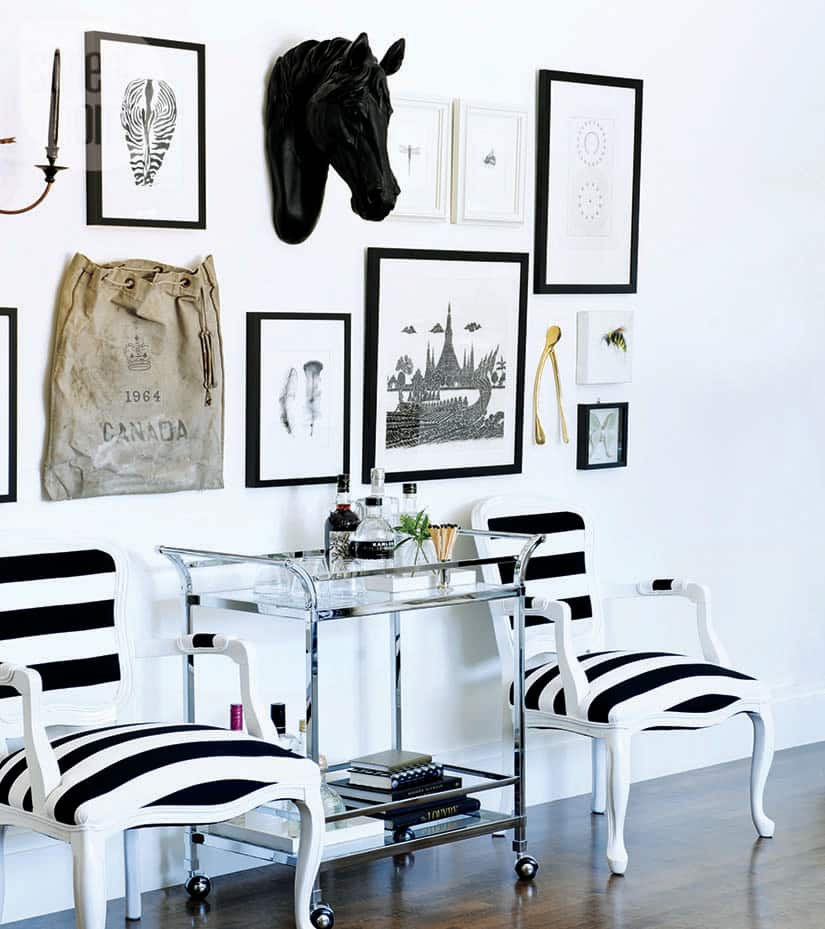 This wall in the living room contains some of Erica’s most meaningful treasures, including a pair of her own ink drawings, a framed moth (the namesake of her blog) from her mother, a gold wishbone and a vintage postal bag one of her sons found in the park. 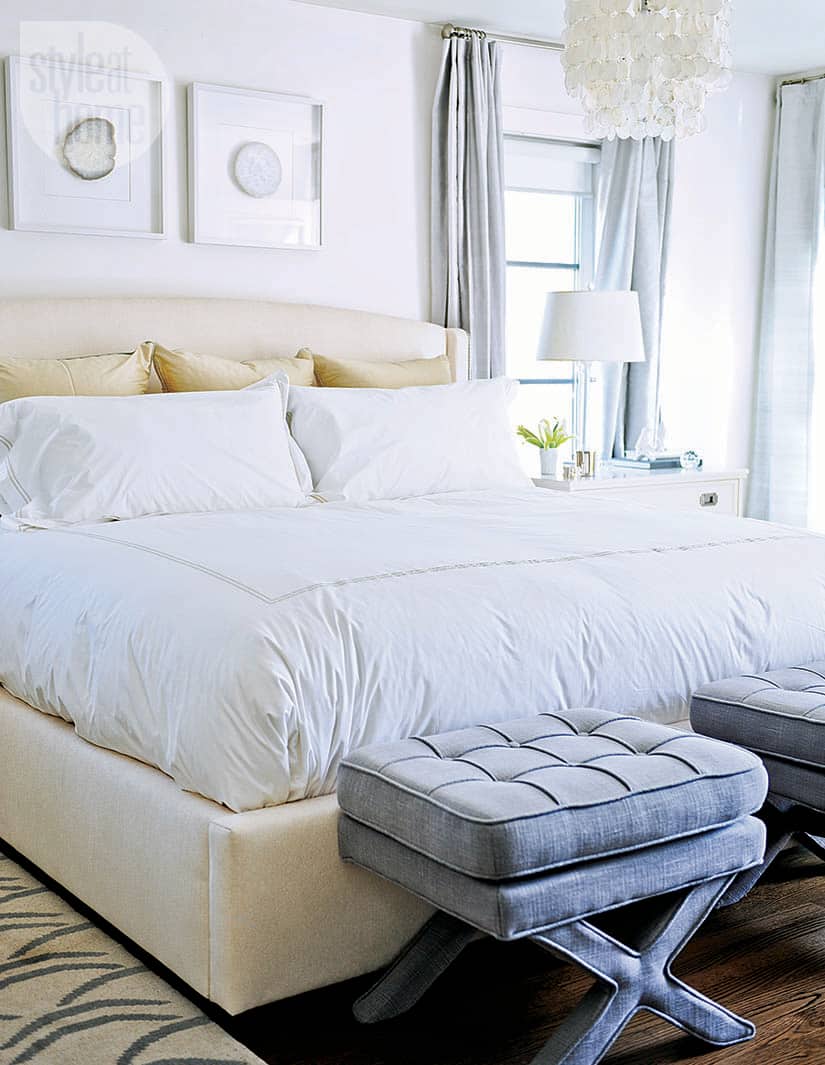 Greys, whites and creams make up the soft, neutral palette in the master bedroom, which acts as Erica’s serene retreat from life with five boys. She framed the agate slices, which hang above the bed, herself. 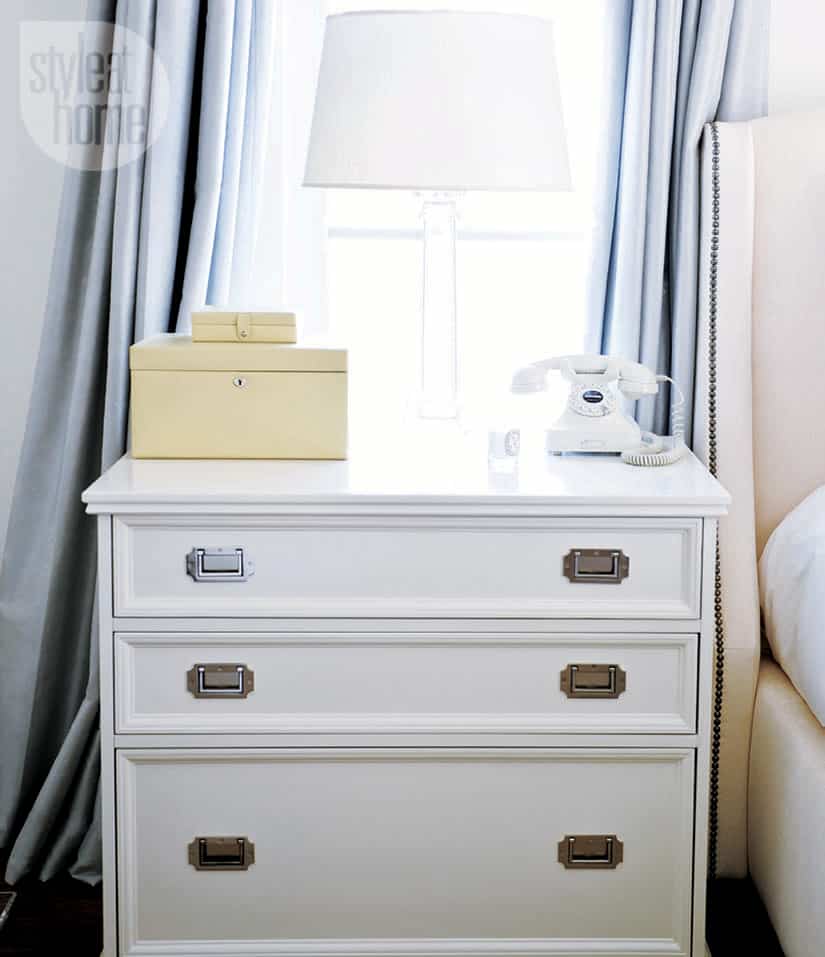 Whenever possible, Erica insists that her design clients select nightstands with plentiful storage. She lives by this rule in her own bedroom, where substantial drawers hide lots of stuff.