A contemporary living area with lively pops of yellow.

Saskatoon style heats up when an outdated interior gets whipped into shape(s) and achieves a stately hotel-chic look that doesn’t shy away from glamour.

After years of living in lofts and condos, Curtis Elmy and Trevor Ciona were intent on owning a fully detached home. Eight months into their search, though, the couple realized that it would be a lot easier said than done. The Saskatoon real estate market was booming at the time and finding a home at all, not to mention one they liked, was a real challenge. “When we eventually found this house,” recalls Curtis, “it had the most bland and boring interior you’ve ever seen!” But the home had huge windows overlooking the Saskatchewan River, and the couple was sold. “You can redesign a house,” says Trevor with a laugh, “but you can’t create a view as gorgeous as this.” Co-owners of Saskatoon’s stylish Atmosphere Interior Design, Curtis and Trevor knew that they were up to the task of updating the tired interior and adding a touch of personality. 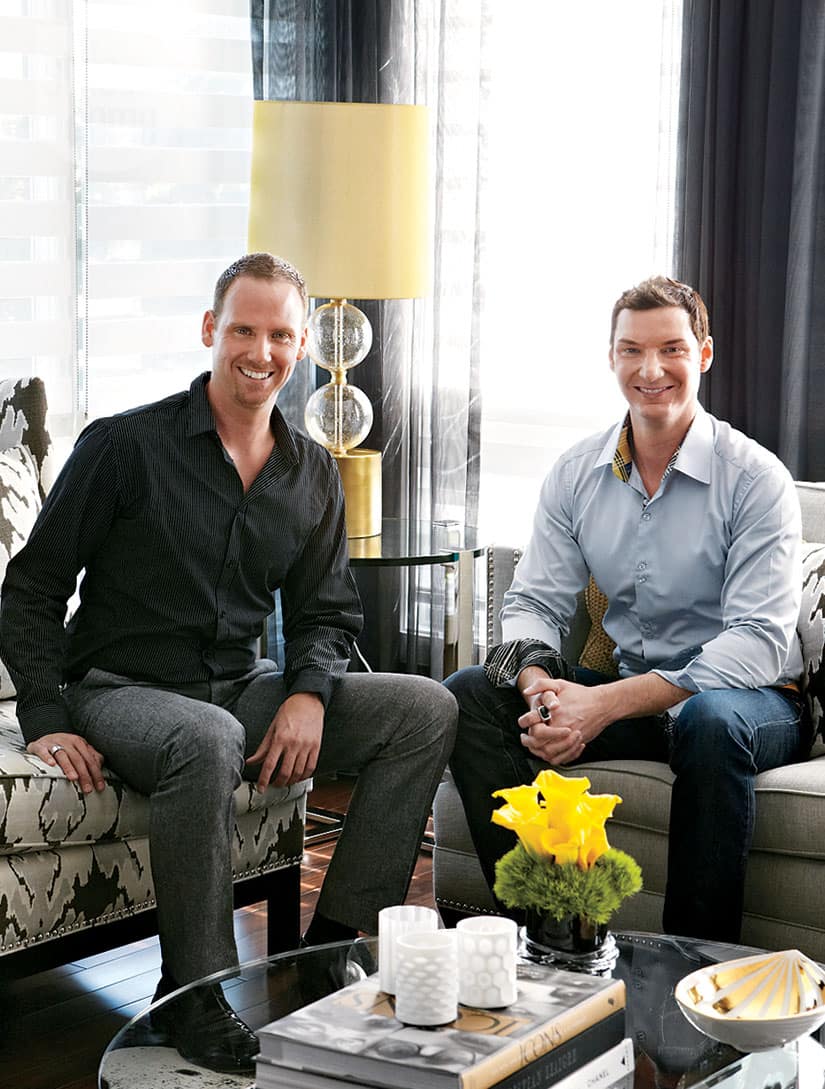 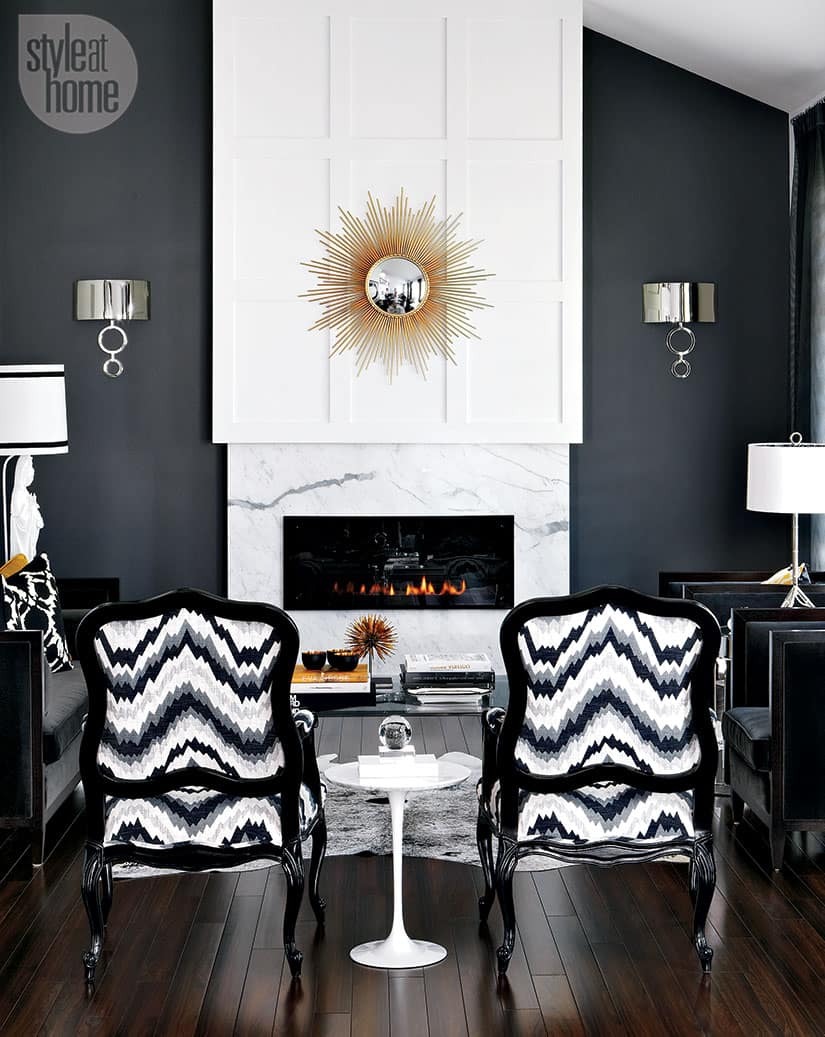 Adding this statement fireplace was a daring decision, but had a big payoff. Covered in Carrara marble, the surround was extended to the ceiling with white architectural panelling. The dark walls serve to highlight the hearth and make the living room more cozy. 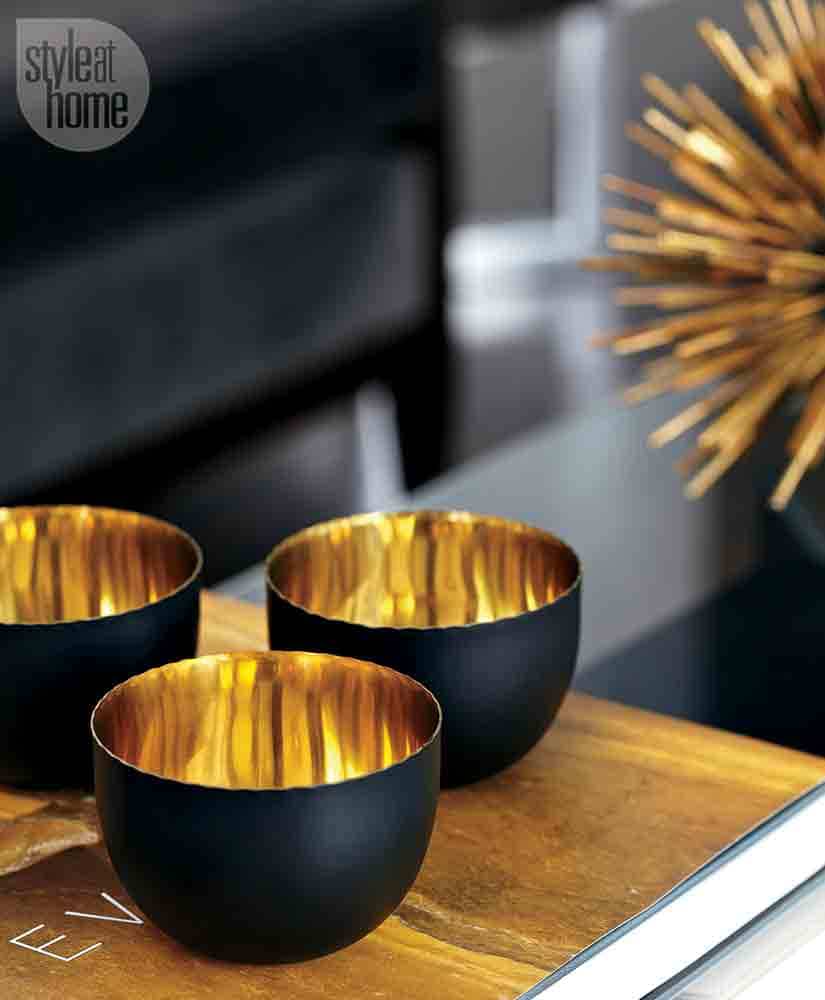 Taking their cue from gold’s resurgence in fashion, designers and homeowners Curtis Elmy and Trevor Ciona gave their home the Midas touch with gold accents in unexpected places – appearing on the inside of bowls like these, as well as on books, hardware and other objets. 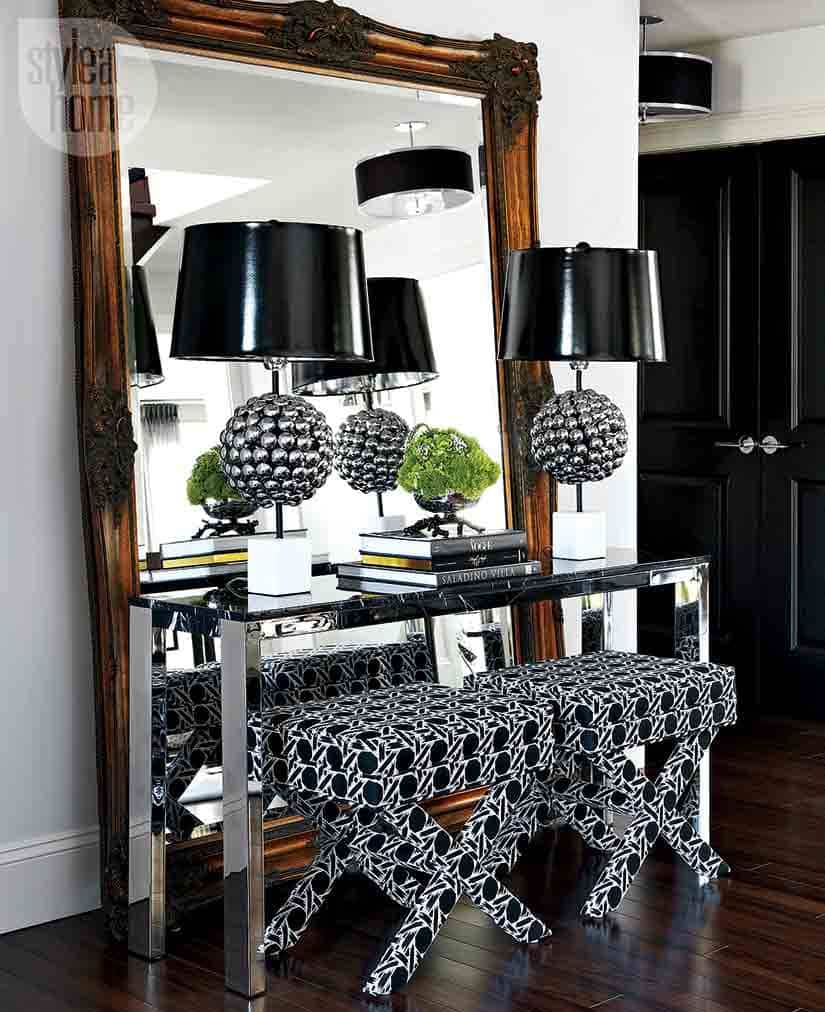 This entryway isn’t only hotel chic, it’s functional, too. The custom benches can be pulled out to rest on when putting on boots and shoes, while the narrow console serves as a clutter collector for keys and cellphones. 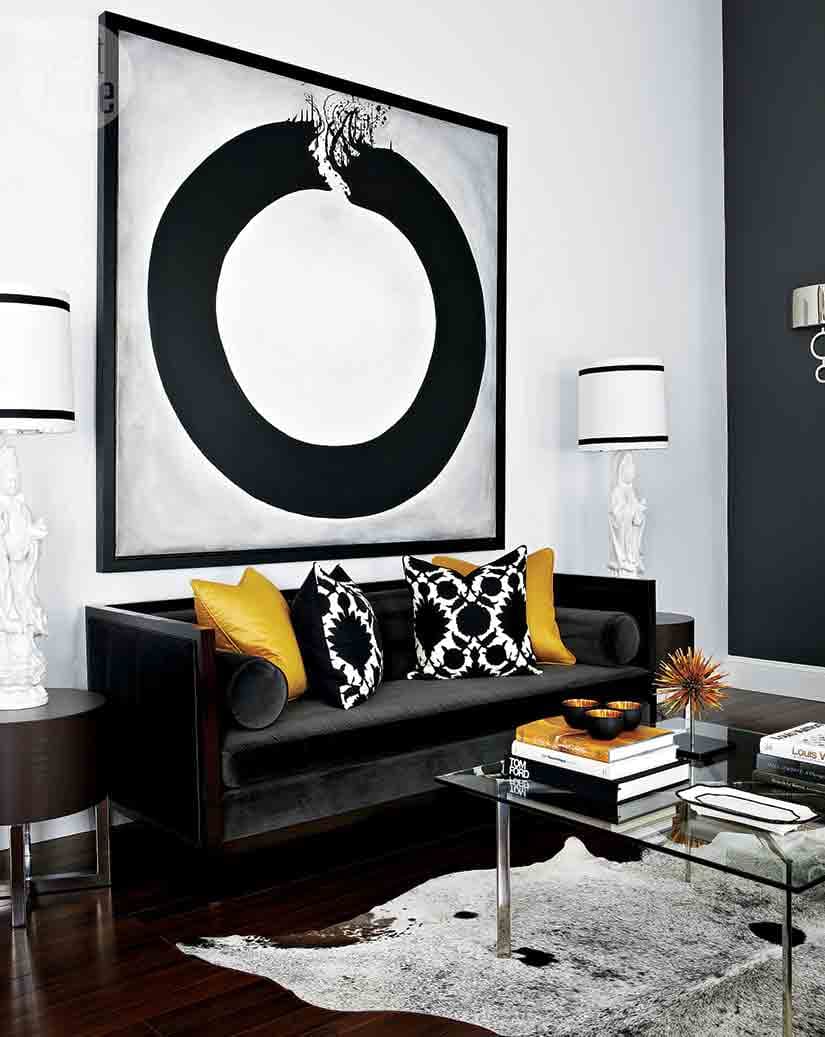 Inspired by an American original, this six-foot-square circle painting was commissioned by the couple to create a focal point in the room – its geometric motif, something that suits the style of the house, isn’t a coincidence! 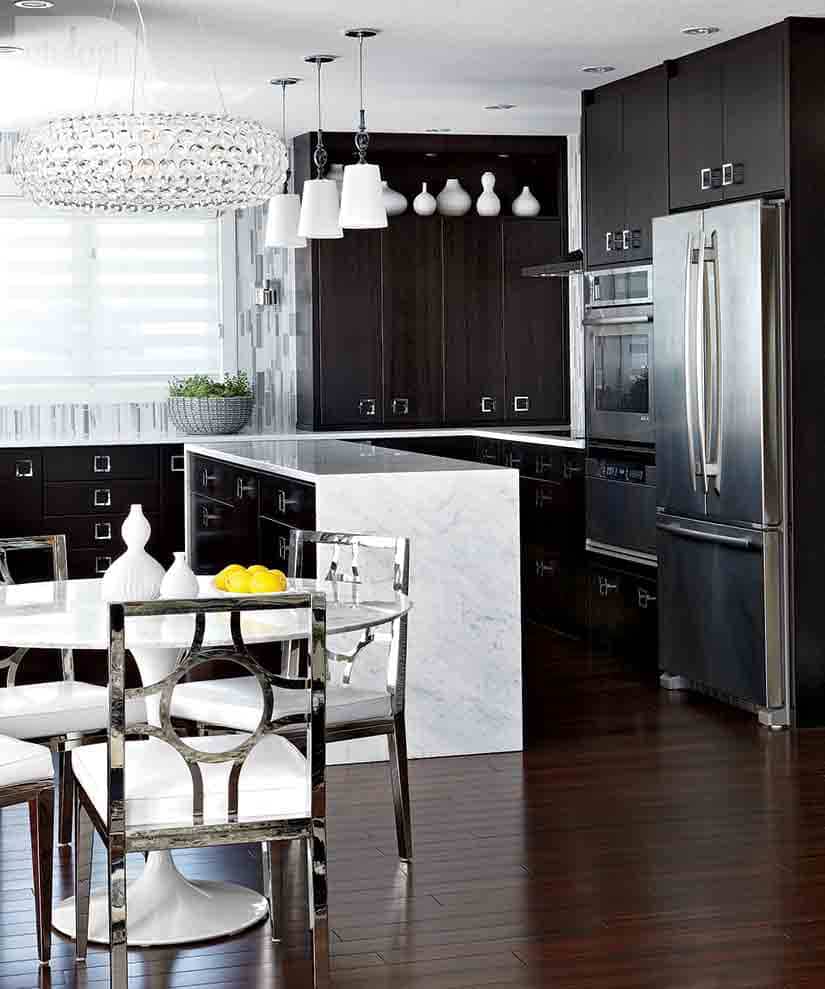 “To be honest, we entertain a lot, but we don’t cook very much,” says Trevor. So the couple kept to the kitchen basics and instead emphasized the decor: Dark cabinetry was selected to make white accessories stand out, the tiles of the marble mosaic backsplash were laid vertically and in various sizes, and light fixtures were hung close to the ceiling to allow for unobstructed river views. 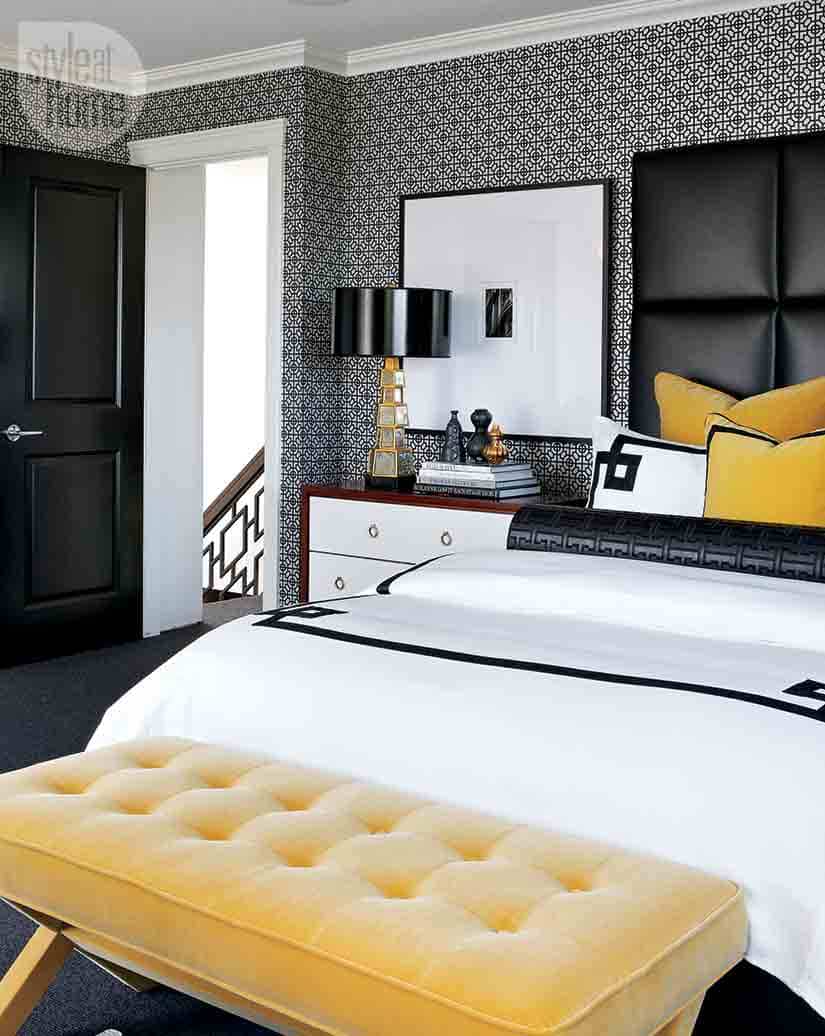 A dark, dramatic bedroom is always a must for Curtis and Trevor. “We work long days and this is where we unwind,” says Curtis. The wallpaper’s intricate geometric pattern could have read as too busy, but the couple tempered it by keeping everything else in the space as solid blocks of colour. 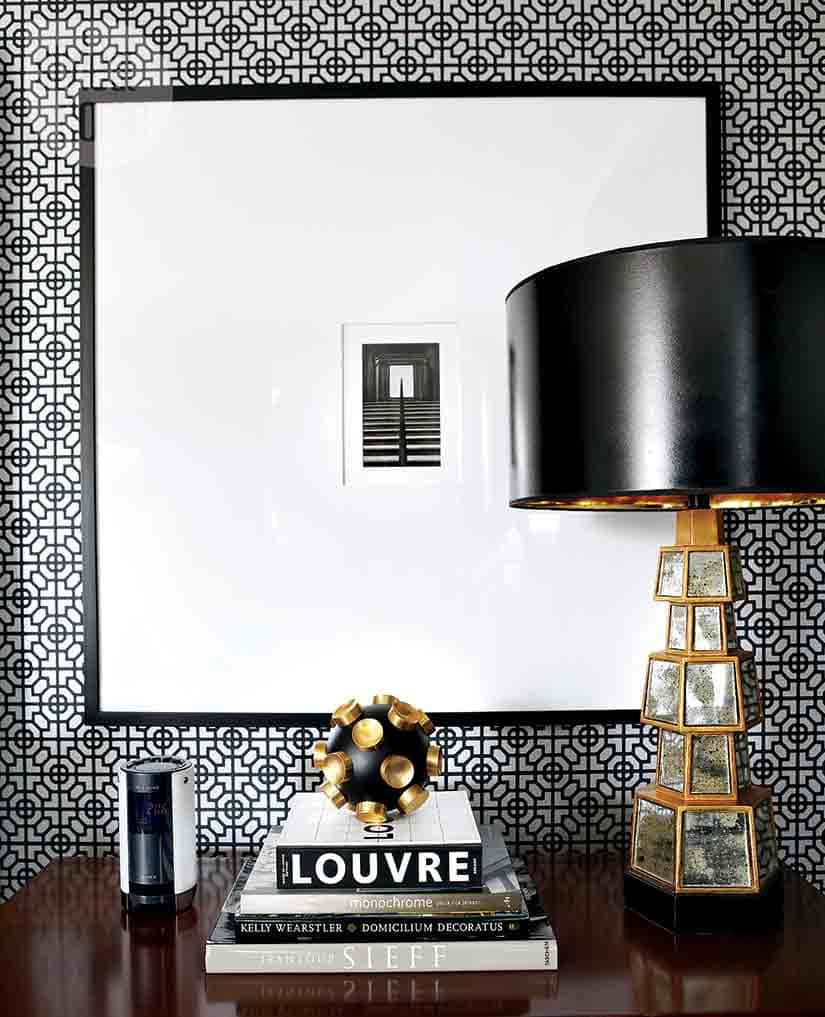 The wallpaper’s geometric pattern on a shiny foil background lends a dash of vintage glamour to the regal bedroom. 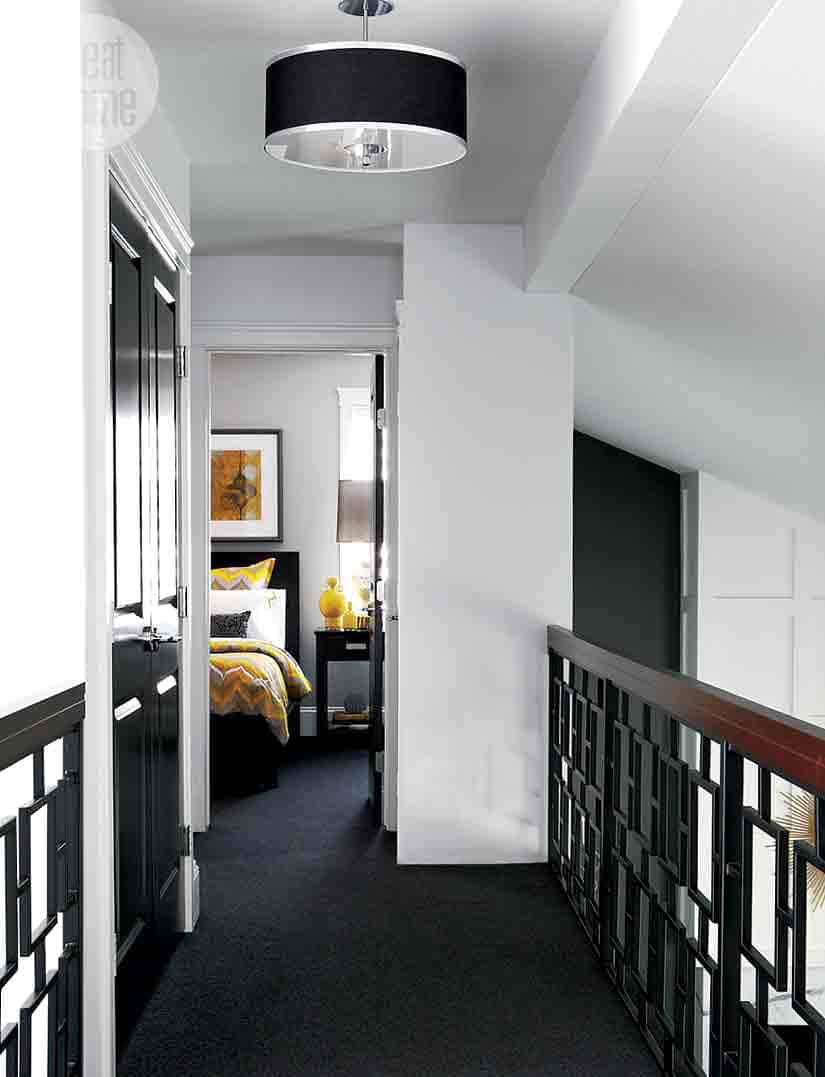 The railing’s key-lock geometric design modernized the house and gave it boutique-hotel appeal. 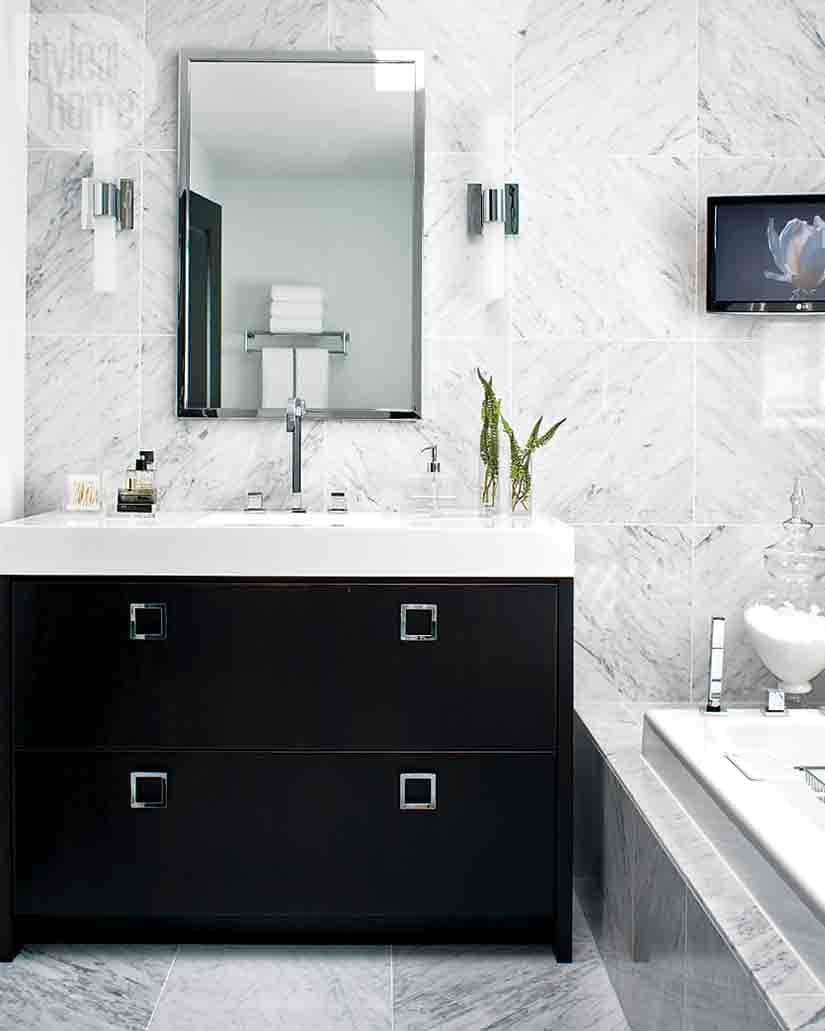 Decorative and simple, the vanity hardware suggests the sophistication of the adjoining bedroom – “We wanted to keep the bathroom clean and airy since the bedroom is so bold,” explains Curtis.

Great design is just a few clicks away! Curtis Elmy and Trevor Ciona share their favourites sources below.

1. Jonathan Adler
“We love Jonathan Adler for his unique sculptural items and decor,” says Trevor. In Saskatoon, some retailers will bring these pieces in upon request. Try it where you live!

3. Silva
“The great thing about Silva is its wide range of fully customizable furniture styles,” says Trevor. “All can be ordered through a designer for delivery to your city – or one nearby.”

5. Amazon.ca
Says the couple: “This is our resource for coffee table books because shipping is incredibly fast!”