Share
Share
Before visiting Panama, I admit my knowledge of the country was limited. I’d seen the NOVA documentary A Man, A Plan, A Canal, Panama when I was young (and marveled at the longest known palindrome) and I was intrigued by the construction of the Panama Canal, a true engineering feat. But beyond that, I had no idea how beautiful the country was or how fast it was growing. On a recent visit, I found out why Panama is such a great place to visit.

A bit of background: Panama is the southernmost country of Central America, situated on a narrow strip of land that connects North and South America. Panama boasts a tropical climate that varies little from season to season, making good weather something sun-starved tourists can count on. The country is divided into nine provinces and has a large indigenous population but it’s also home to some of the most urbanized cities in Central America.

Panama City has an emerging skyline of skyscrapers that is unexpected in a Central American country and has an increasing traffic problem in and out of the city; a sure sign of urban growth. But venture outside of the city and you’ll find rest and relaxation at the Westin Playa Bonita. Ready to take a closer look at the perfect place to stay on your next vacation? 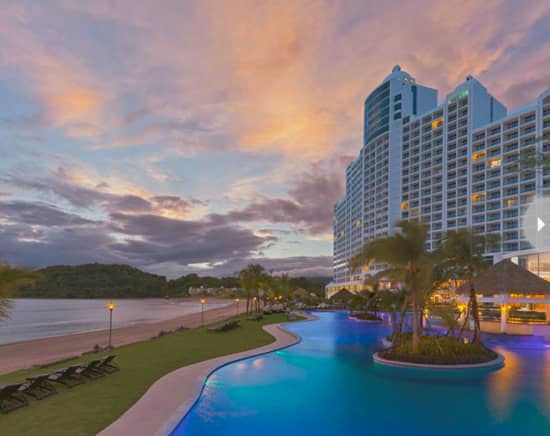 The Westin Playa Bonita
The Westin Playa Bonita is situated along the tranquil waters of the Pacific Ocean. The views are spectacular morning, noon and night as the sky turns from shades of indigo to pink and purple, then indigo again at nightfall. The hotel is located just far enough from the bustle of the city to make you feel like you’ve left it all behind, but is conveniently near to attractions like the Panama Canal’s Miraflores Locks. 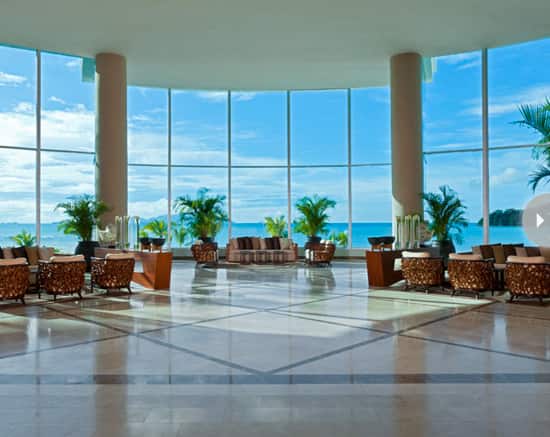 A breathtaking view from the lobby
Step into the expansive hotel lobby and you’ll note the minimalist design immediately. The furniture is sparse and there’s a sea of marble tile with little else to distract the eye. But that’s the intention behind the design. According to Denise Chu, interior designer of the hotel, the sweeping view is intended to be the star of the lobby. With ceilings soaring to over 30 feet and floor-to-ceiling windows overlooking the Playa Bonita Bay, the view is breathtaking and the perfect way to greet travel-weary guests. “The rest of the lobby was kept neutral and we used tone-on-tone, but with a lot of natural materials such as wood and stone,” says Denise. The subdued palette lets the hotel’s surrounding natural beauty really shine. 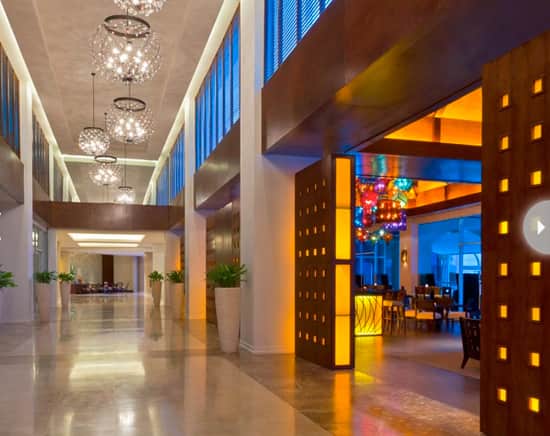 The long hallway
Roll out the red carpet! Guests may feel like they’re walking down one, as they make their way to their room; the long hallway through the hotel indicates the arrival to guest-only areas. “We wanted to make our guests feel special, so we added a little bit of sparkle with this costume-design crystal chandelier inspired by Panamanian nature,” says Denise. 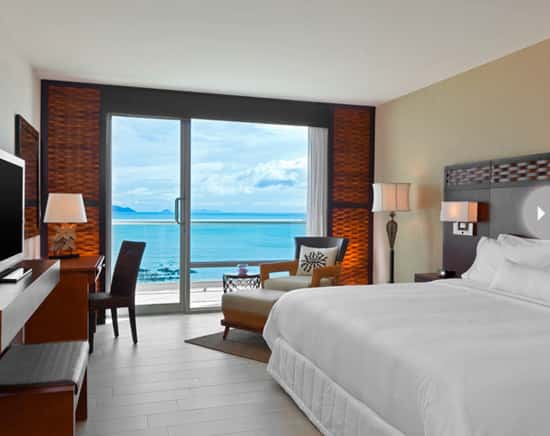 Cultural details in the bedroom
Modern. Clean. Efficient. Organic. These are the words that Denise uses to describe the look and feel of the hotel bedrooms. It’s all about relaxation in these rooms so the decor is simple and unfussy. “The color palette used is all neutrals, as we wanted the fantastic view to be the focal point of the rooms,” says Denise. “We used beige, off-white and white in our fabric and wall selections. We used several wood accents, including the window lattices that were carved as small waves evoking the ocean.” But in honour of the country and its talent, the Westin Playa Bonita Panama hotel incorporates pieces of traditional culture and art into the rooms. The accent pillows are traditional Panamanian molas (part of the traditional costume for women), made by the Kuna Indians of San Blas Islands, explains Denise. The artwork found throughout the rooms is by local artist J.J. Ribi. 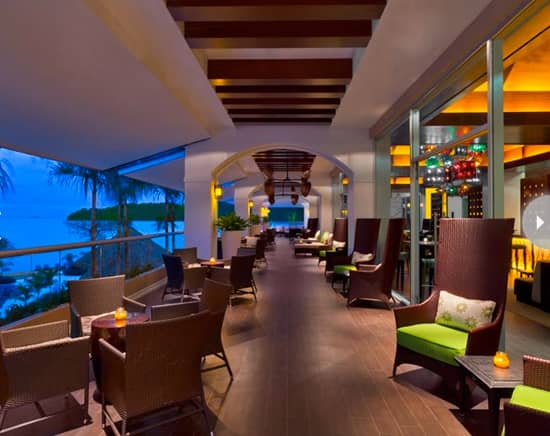 Six different culinary experiences
The property has a total of six restaurants. “Each of the restaurants have a completely different feel, as we have many guests that stay for a week or more and we want to make sure they keep entertained by having different culinary experiences of Panama,” says Denise. So no matter your palate’s preference, you’re likely to find something to suit any craving. Guests can find seafood and grill grub as well as Latin, Asian and Mediterranean cuisines. 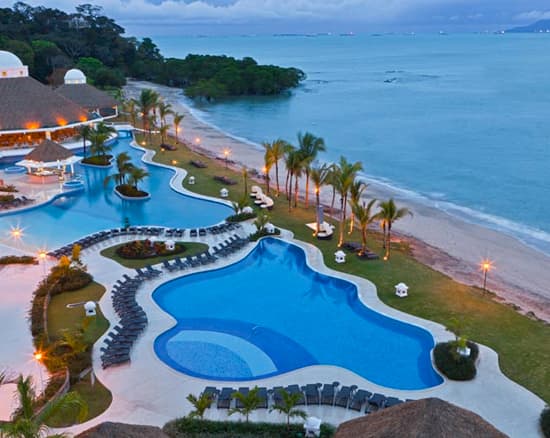 An oceanfront room
Take in the view from any oceanfront room and not only will you be delighted by your view of the Playa Bonita Bay, but the four pools below make a dazzling sight as well. There’s a shallow pool for kids, a main pool for everyone, an activities pool (volleyball, anyone?) and a quiet adult pool. All of them are infinity pools, overlooking the Pacific.