Popcorn ceilings and parquet floors are universal markers of a dated home, and they ran throughout this three bedroom, 1,600-square-foot Toronto condo. The vibe was much too “dull” rigueur for its stylish homeowner, who had lived here since 1992 but decided it was finally time for an overhaul. “It felt old.

We redid everything,” says Priya Mitrovic, the principal designer of Studio P Interiors, which is behind the six-month project alongside Build 4 You Contractors. “The main move was to the living spaces. We removed two walls in the kitchen and two in the sunroom,” says Priya. “We opened everything up and made it open concept.” Well, almost open. Near the windows, a new half wall cleverly creates more options for furniture placement. And the popcorn and parquet?

Gone, of course, and replaced with white oak floors and smooth ceilings that help modernize the space. The kitchen’s salmon-hued marble backsplash is a particular showstopper. “People always comment on it,” says the designer. The colour is trademark Priya, who’s known for her fresh, youthful interiors. “The main goal was to refresh this dated condo with a more functional open-concept layout with better flow and chic, contemporary finishings and furniture,” says Priya, who is as happy as her client about how the project turned out. 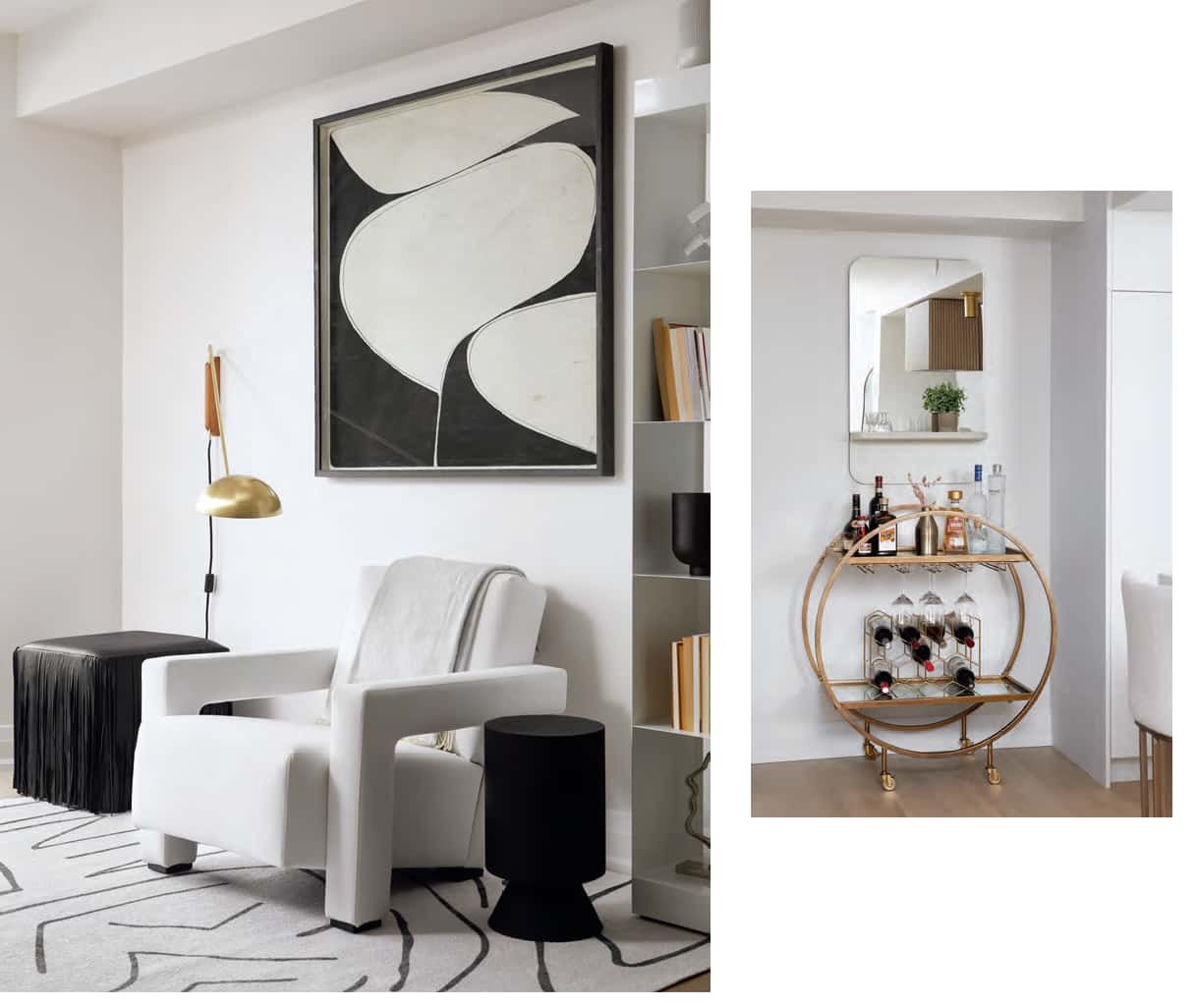 “I chose a mix of chairs and a bench to make it feel like you’re at a café,” says designer Priya Mitrovic of the dining area, with its intriguing line drawing artwork. Pretty and portable, the gold bar cart is situated between the dining area and the kitchen for easy entertaining. “We wanted an area to display bottles and serve drinks,” says Priya. The circular shape is both playful and on-trend. The gold finish, meanwhile, ties into the rest of the accent pieces in the condo.

Read Between the Lines

The homeowner is a passionate reader, so Priya created a designated spot to hunker down with a book. Abstract art, an upholstered armchair with a striking silhouette, and two differently shaped ottomans add a modern twist to the space – it’s night and day from the dated sunroom that was here before. “Her Coton de Tulear dog, Gemma, loves to sit in the chair,” jokes Priya.

“The stone is everything! Everyone is obsessed with it.” 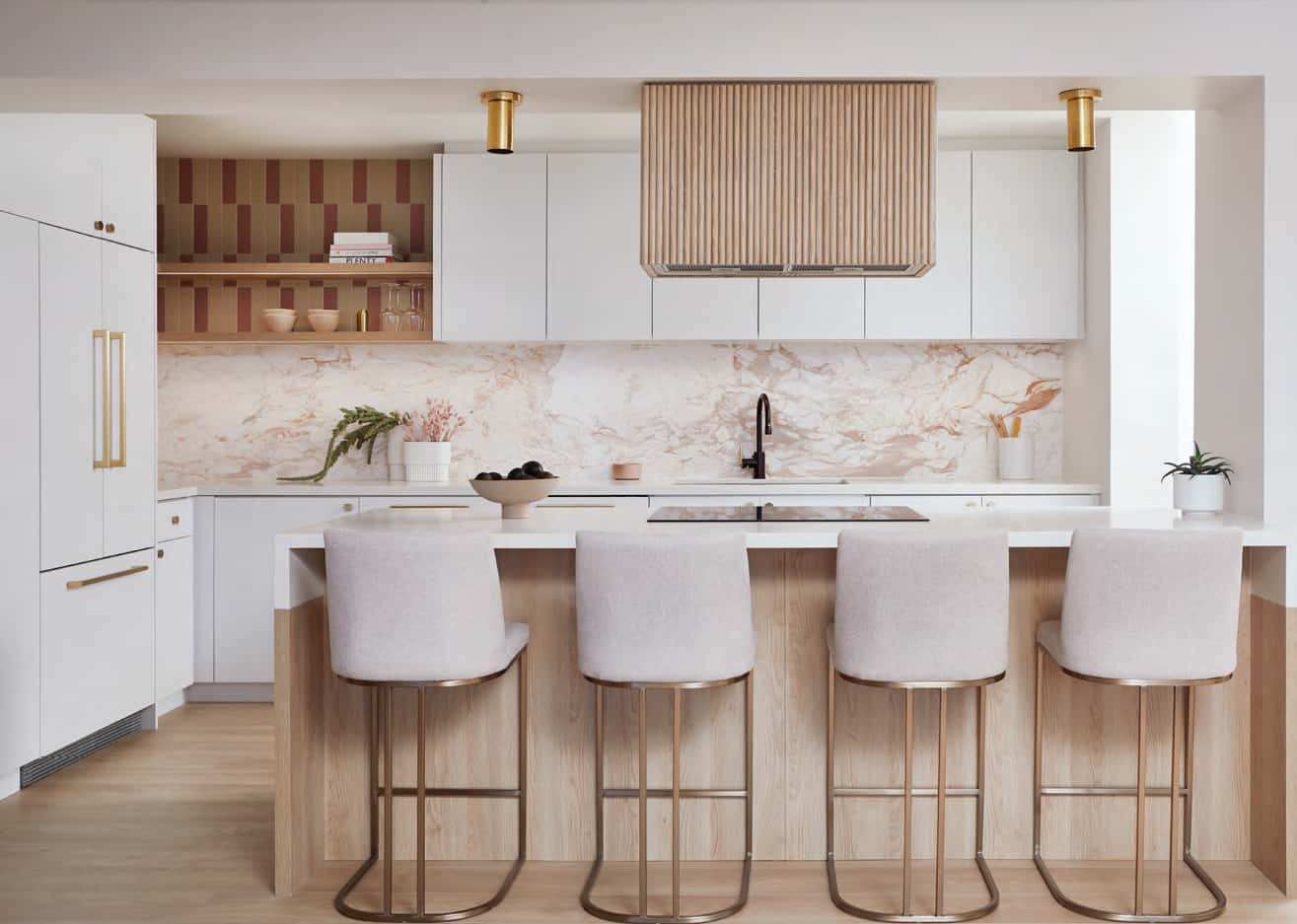 “The stone is a Calacatta marble backsplash in a pink mauve tone and is from Greece,” says Priya of the stone backsplash that’s the admiration of all. “We used one large slab.” Floating shelves and earthy matte tile break up the cabinetry while the fluted oak range hood (and matching island base) adds organic flair. Says Priya, “It’s a design element, rather than a conspicuous silver hood vent.”

“I always start with a kitchen in an older condo,” says Priya. “The layout is never quite right, and there’s never enough lighting.” In this instance, a wall that boxed in the kitchen was demolished to make way for the revamped scheme, including a generous island. “Ceiling-mount brass lighting fixtures were installed to evoke glamour,” says the designer.

This kitchen, amazingly, was previously fully enclosed. Priya (shown left) brought it to life by reimagining the layout (although the oven had to stay put) and amping up the finishes. “For interest, I did a mix of open and closed storage. To keep everything clean-lined, the Fisher & Paykel fridge is panelled,” she says. Slick quartz countertops and brass hardware also bring zip to the space. 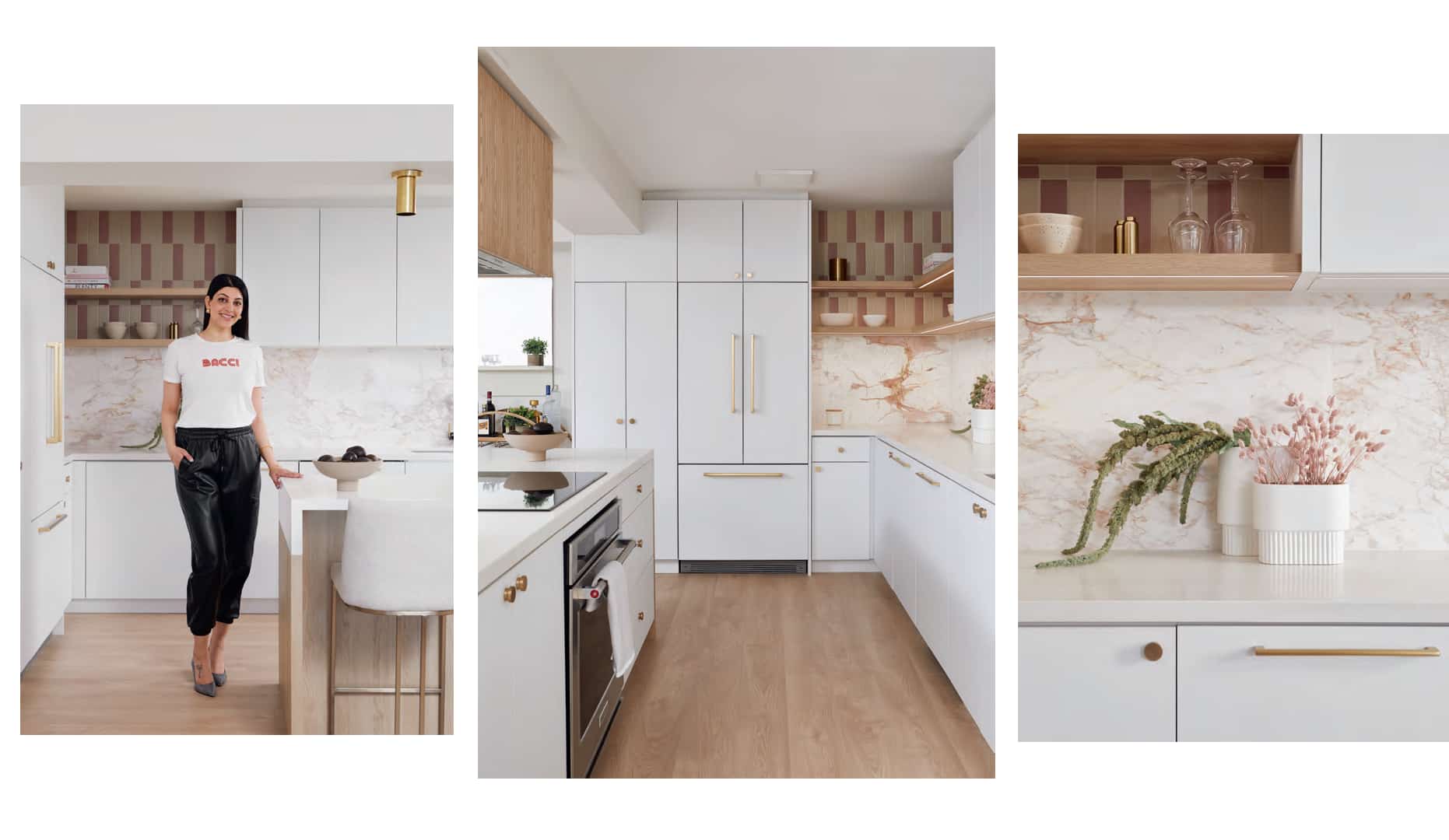 “We wanted the living room to feel comfortable, chic and cozy,” says Priya. Custom floorto- ceiling drapes were installed (the walls were bare before) as a finishing detail to warm up the space. The deep sofa is made for kicking back, while a faceted coffee table brings a textural element to the scene. 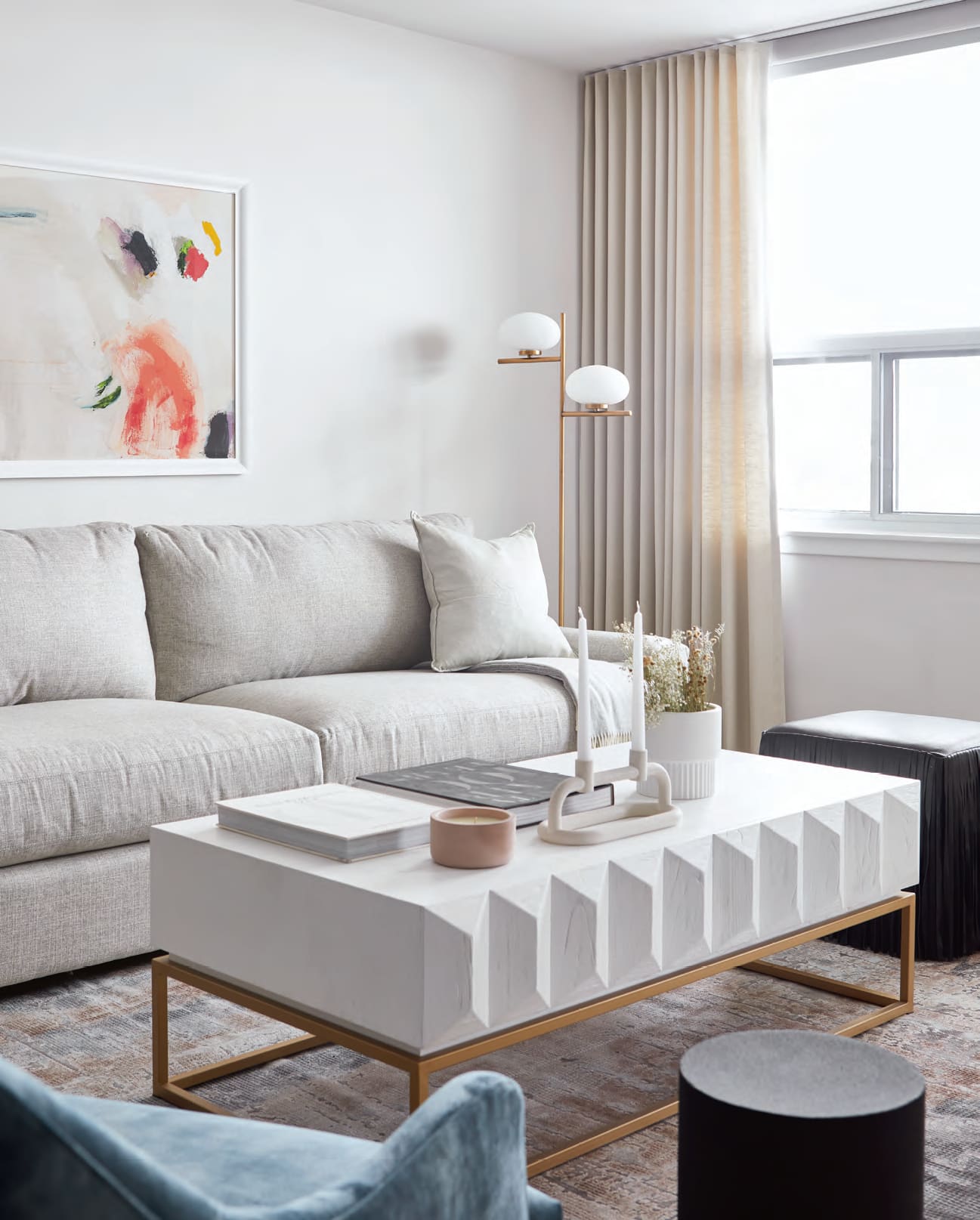 “People spend a lot of time lounging in their living rooms.” 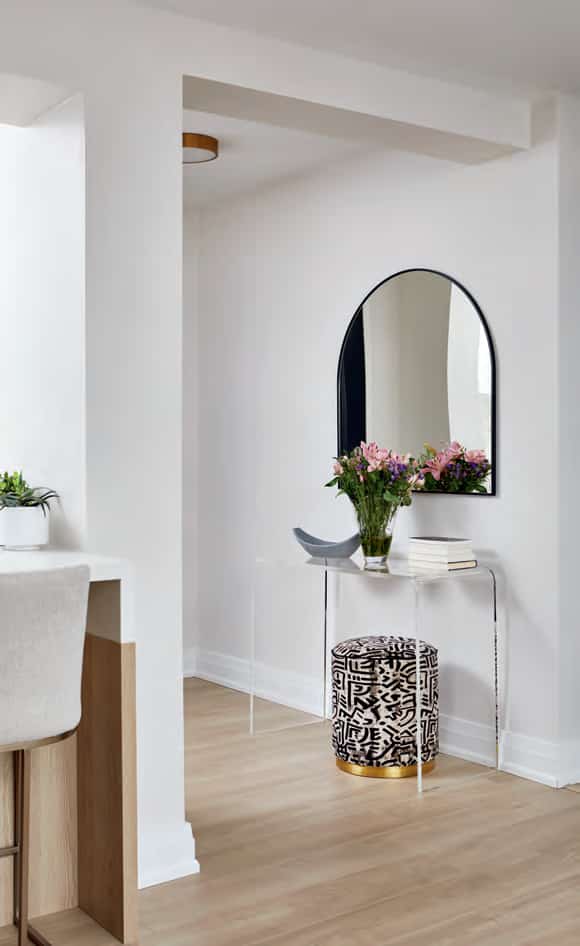 “You want to feel at home and at ease – a fresh environment is always welcome.”

A small, snazzy vignette is welcoming off the entranceway. “I wanted a spot for her to throw her keys and put her coffee down,” says Priya. “I didn’t want it to take up too much space, but have it feel airy.” The curves in the mirror and stool bring a certain whimsy to the arrangement, says the designer.

A dramatic six-foot-wide divider wall – half is clad in large-format marble-effect porcelain tile – is functional and eye catching. The new wall allowed Priya to face all the living room furniture in an opposite direction than previously, with the sitting area facing the room’s new architectural focal point. 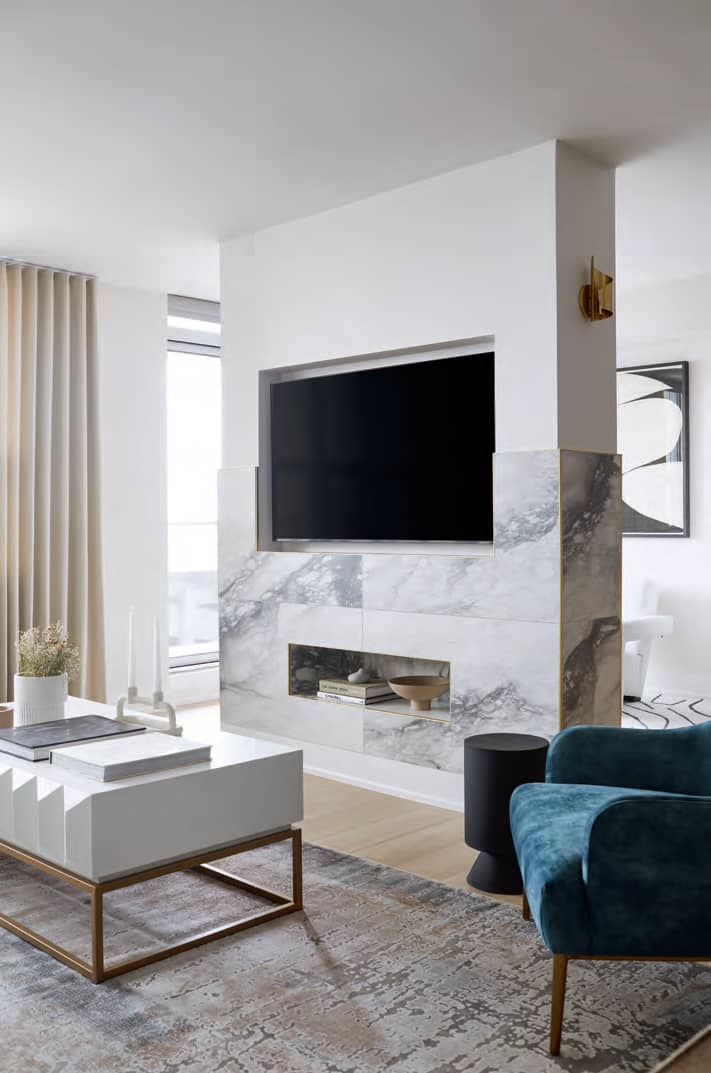 A colour-block treatment in the bedroom is captivating. “That was really fun!” says Priya. “Instead of wallpaper, we worked with art prints for pattern, and to add a splash of colour, we framed the headboard with paint that we carried to the ceiling.” 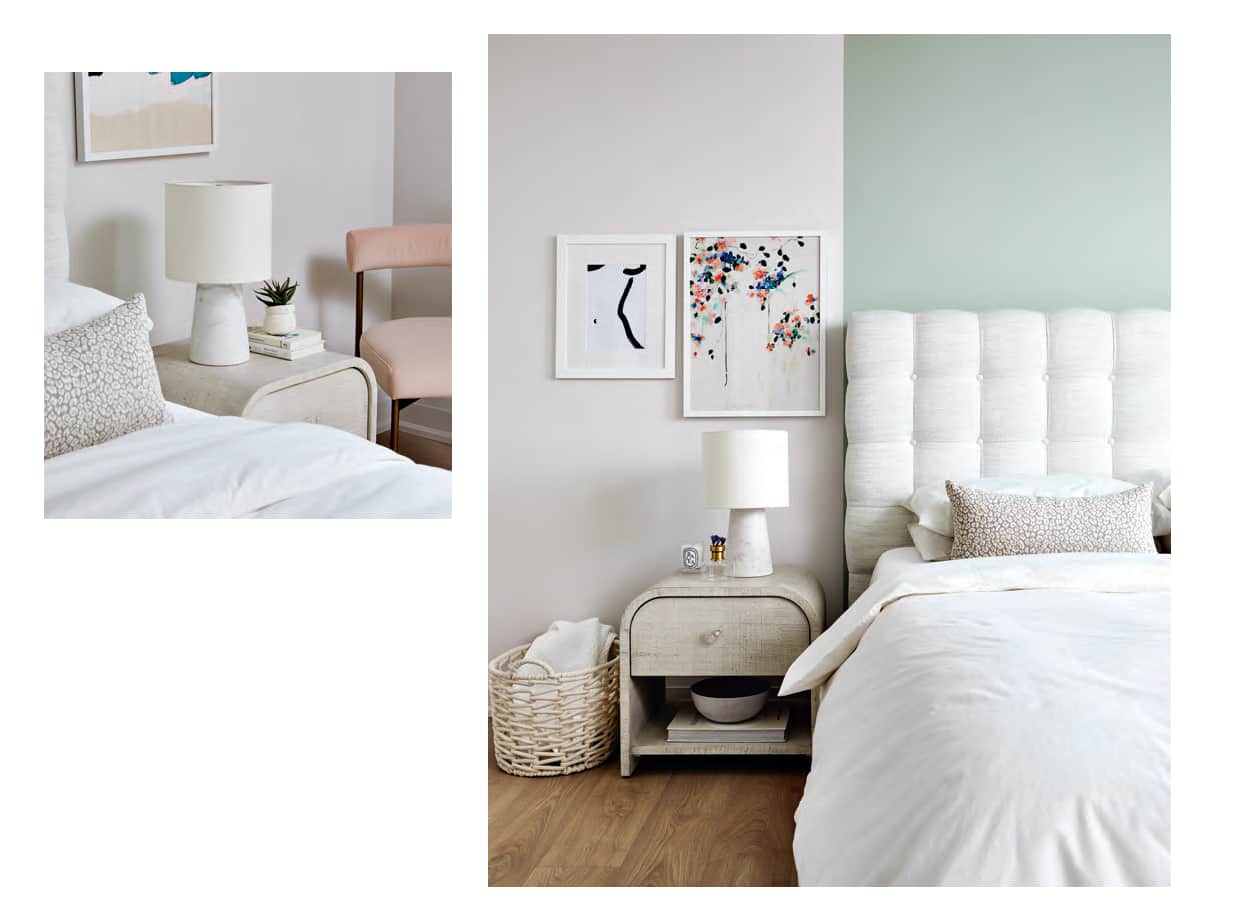 Hex Is Best The frameless glass door in the primary ensuite lets the beautiful tile shine. “She wanted to bring a bit of Italy to the space, so we went with a terracotta pink hex tile,” says Priya. “I love injecting a vivid colour into a space. It adds a fun element.” 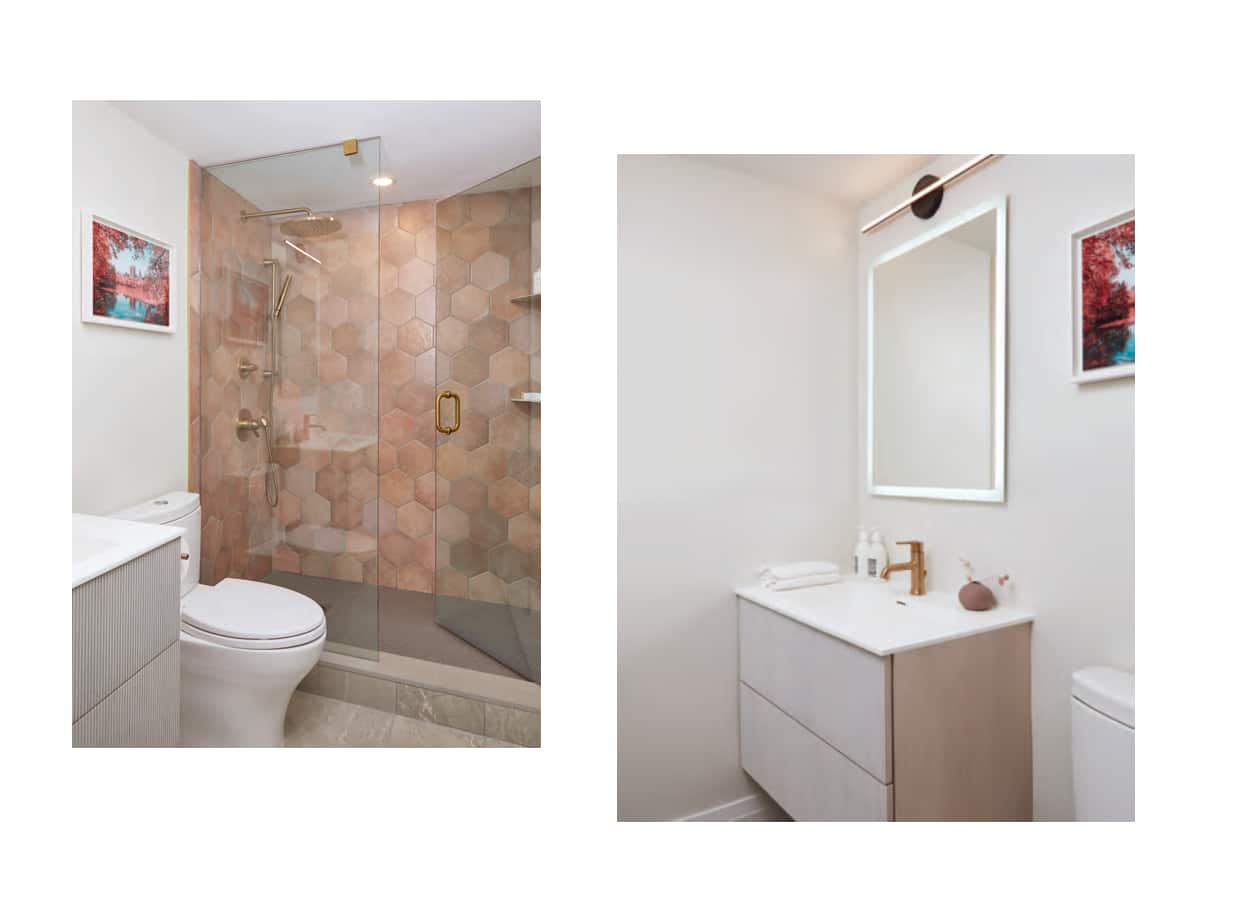 “Restful bedrooms are always the goal. I like to optfor soothing tones and sumptuous fabrics. “The Structube bookcase makes a goodbackdrop for Zoom calls.”

Terrific Tomes Priya converted one of the three bedrooms into an office. “The Structube bookcase makes a good backdrop for Zoom calls,” she says. The fun piece has plenty of compartments, allowing Priya to invoke some styling magic to make it a feature. She says, “We colour-coordinated her books and added decor pieces.” Chelsea 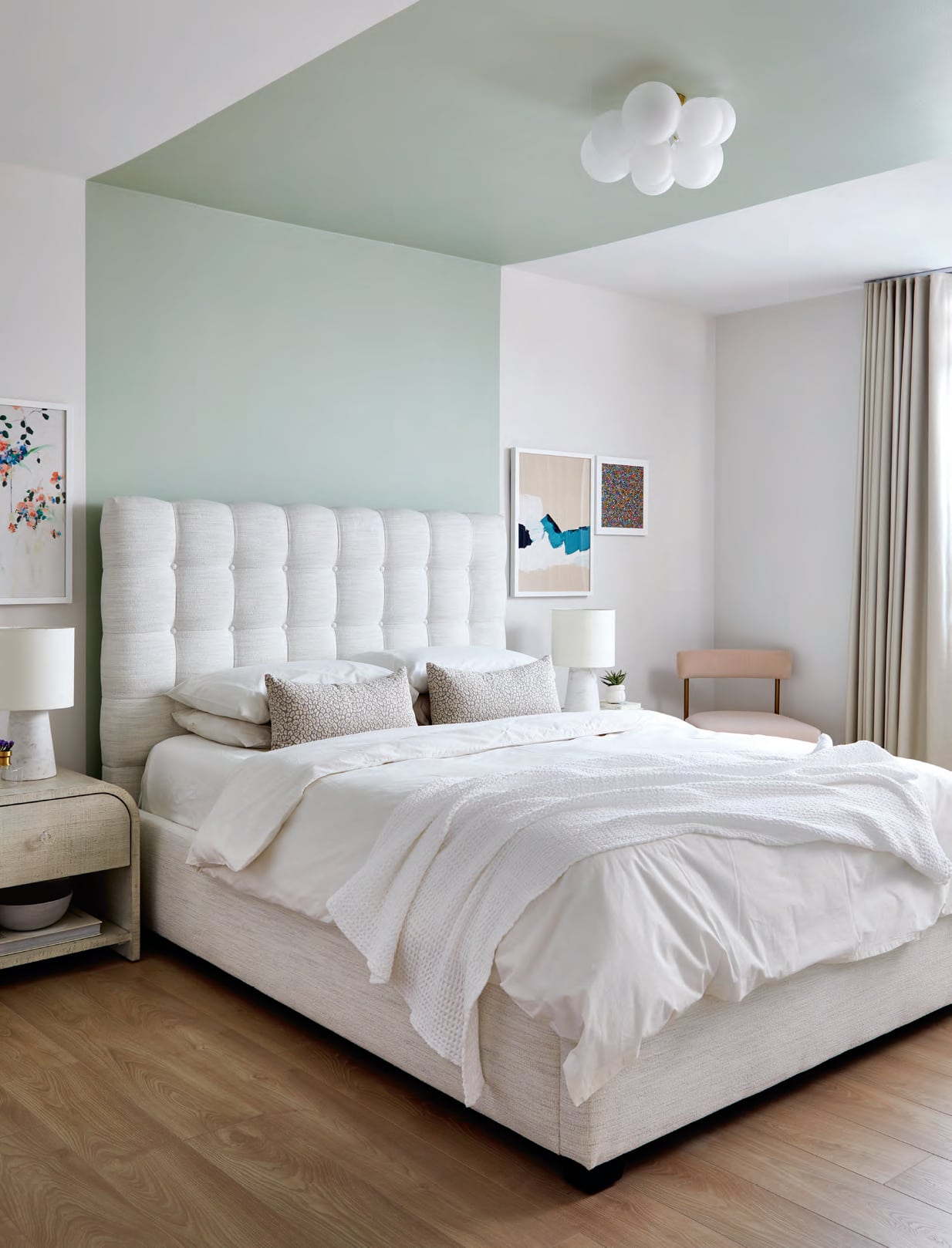 Annie Gaudreault and Peter Shier were delighted to land a beautiful corner suite in a stylish new Toronto condo building. But despite its high ceilings and wraparound views, it was, like most condos, still a typical white “box in the sky,” without much character. They called in Emilia Wisniewski of Studio 1NINE1 to fill their nest with colour and one-of-a-kind style.