Learn the tips and tricks to decorating with blue. Author: Mark Burstyn

Hip and laid-back may not be the first words that come to mind when talking about a four-bedroom Georgian-style home in Toronto's upscale Forest Hill neighbourhood. But homeowner Lesley Glowinsky is about as fresh and fun as it gets, so it should come as no surprise that designer Tara Fingold wanted to create a space taht would be as playfully easygoing as it would be elegant. Her secret weapon? Her use of blue. Here's how she made it work. 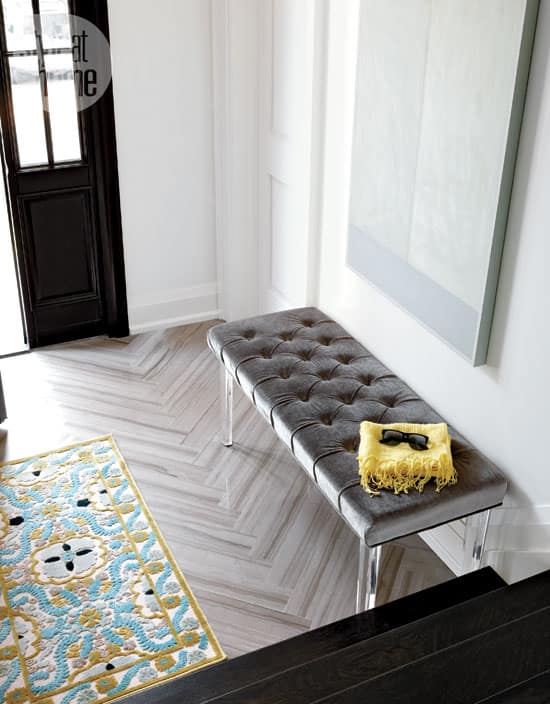 1 Set the scene
“Introduce your colour scheme in the entryway to set the tone for the rest of the house,” says designer Tara Fingold. Start with a subtle variation on the hue, like the soft blue-grey that appears on the bench, and go bolder in other rooms. The fun rug is an indication of what’s to come. 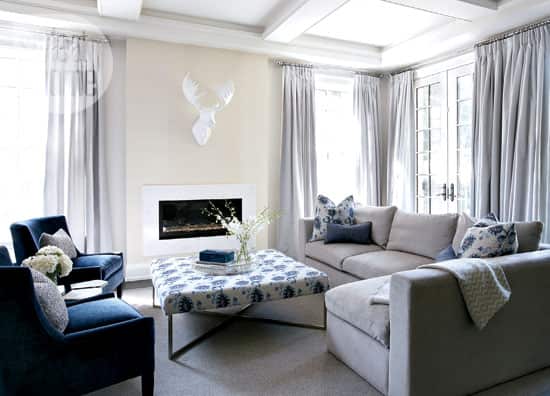 2 Keep it cozy
Since this is the place to hang out when friends come over, the striking cobalt blues in the family room were deliberately paired with super-cozy fabrics like the velvet on the armchairs and the chenille on the sofa. Pale grey drapery, as well as a modernized botanical print on the ottoman and toss cushions, softens the room’s more traditional details like the high coffered ceilings.

The look? Fresh and relaxed. 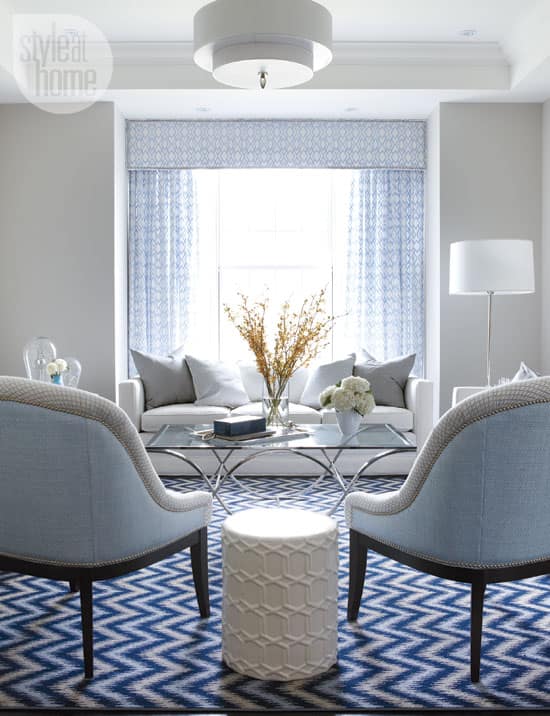 3 Offset tradition
The living room is the most formal room in the house and, consequently, the most traditional. To counter this, Tara played with bold patterns in stronger tones of blue, such as the zigzag on the rug and the geometric diamond print on the drapery. Cobalt, navy and denim are immediately apparent, but “there are actually about seven different blues in this one room,” says the designer. 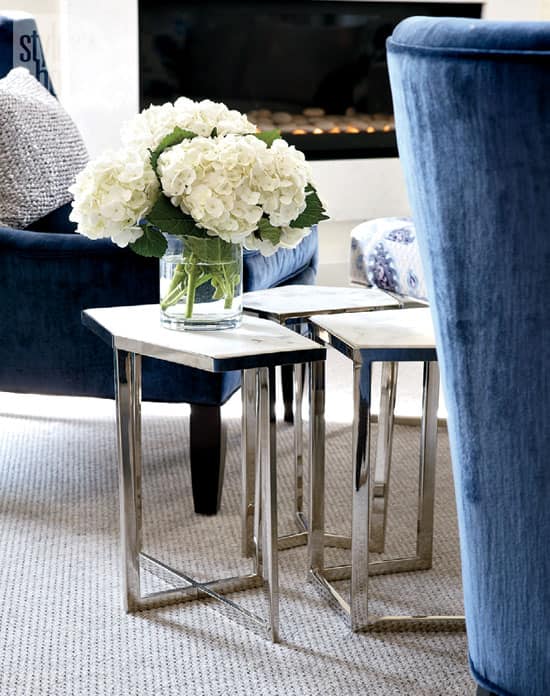 4 Go mod(ular)
Since the family room is the most-used space in the house, Tara chose modular elements. This side table is made up of three smaller side tables that can be moved to convenient locations for friends to set drinks on while mingling. 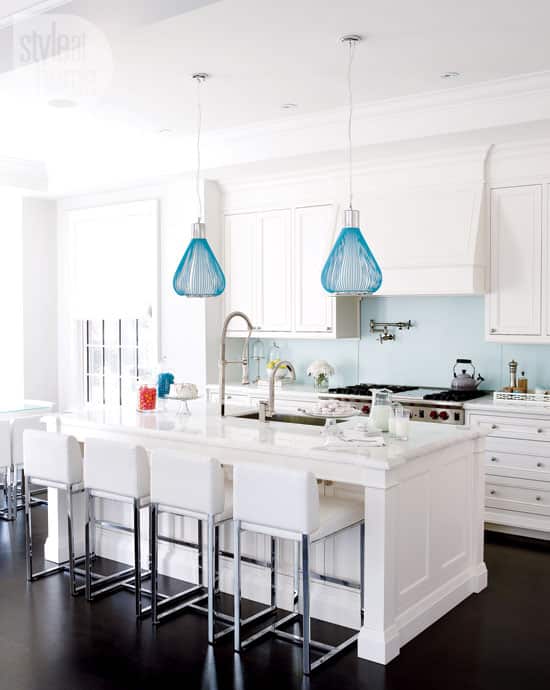 5 Make it work
A crisp white kitchen provides the perfect backdrop for whispers of blue. In this case, pendant lights provide the main blue accent. Originally, the pendant frames were clear, but Tara had them spray-painted in aqua. The tempered-glass backsplash lends a watery blue to the room. 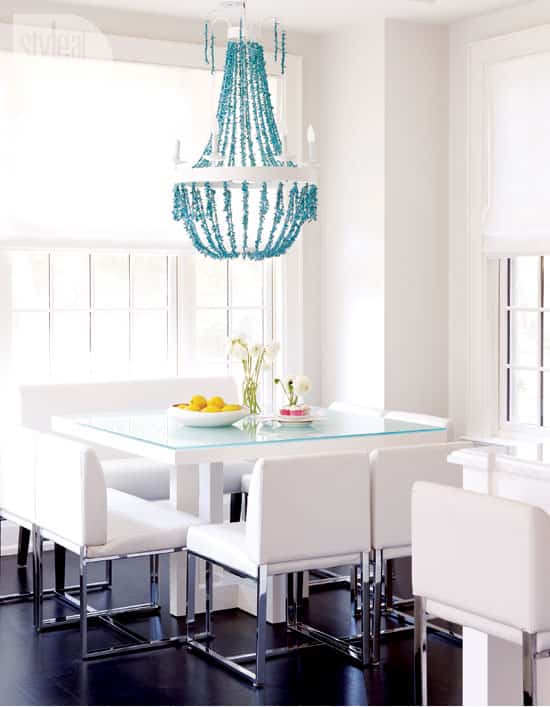 6 Make a statement
In the kitchen’s otherwise sparse and clean-lined eat-in area, the oversized vintage chandelier provides interest through texture and curves. The glass top on the table stands out for its blue-green hue and bounces light from the windows, bringing the sky indoors. 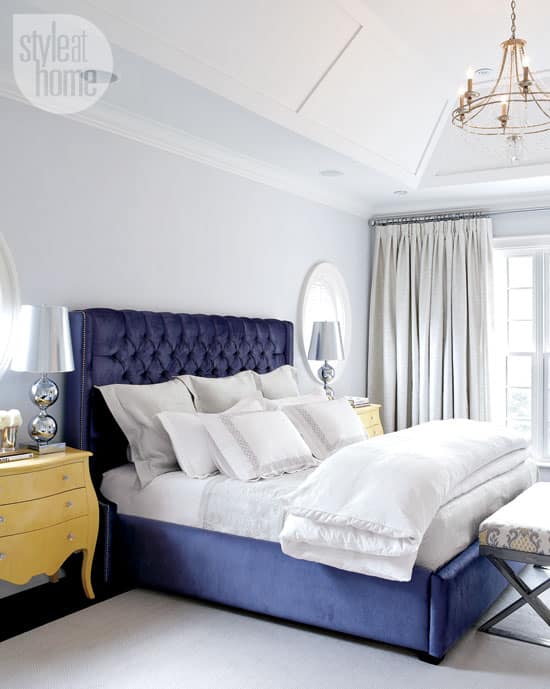 7 Play with pattern and texture
In the master bedroom, Tara wanted to achieve a dreamy look with pops of colour. Femininity is infused through the violet-blue tufted bed frame, while the sunny yellow nightstands add unexpected whimsy and the crystal chandelier dangles like a pretty earring. The combination of textures, such as lush velvet and sleek gunmetal, keeps the room feeling young. 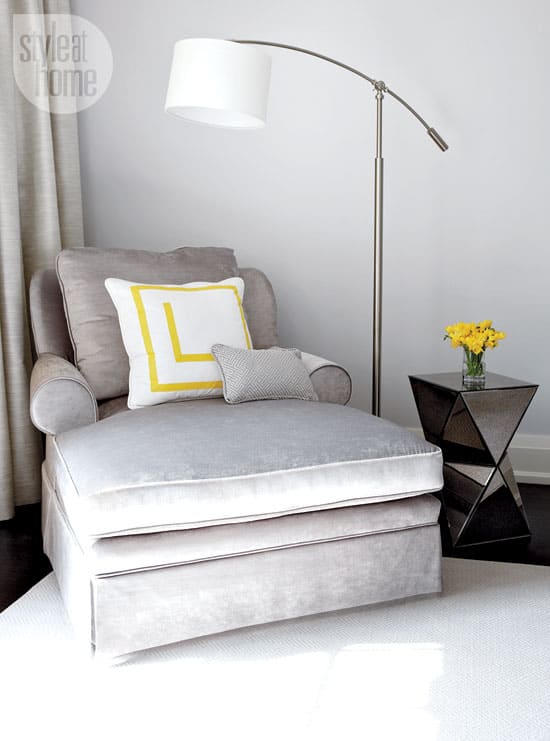 8 Embrace elegance
Nestled in one corner of the bedroom, a pearl grey chaise invites a luxurious afternoon of reading. The angular mirrored side table and arched chrome floor lamp suggest sophisticated elegance in a fresh, funky way. 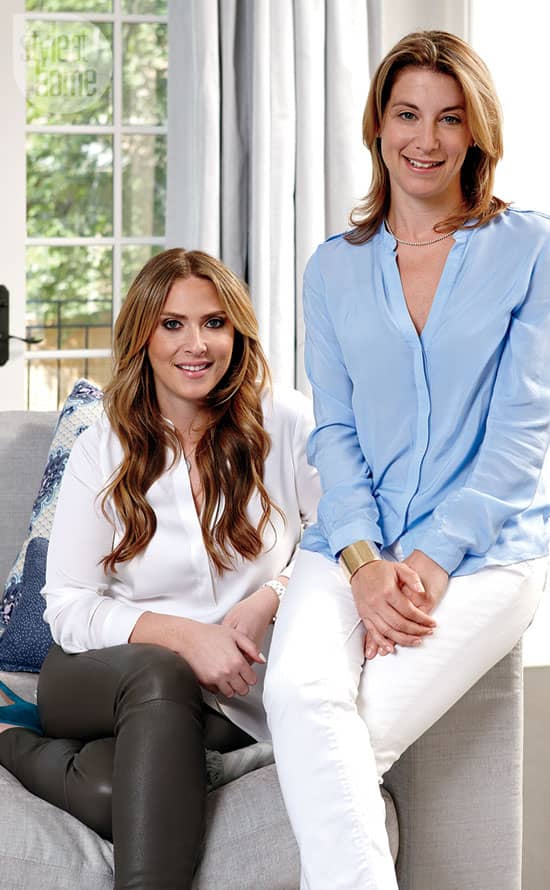 9 Find your match in more than colour
“Working with colour isn’t for everyone – the client has to be up for it,” says Tara. “That’s why it was so great to work with lesley Glowinsky (far left). She was so open to it, and she really allowed me to have free rein.”

9 fresh ways to decorate with blue