I’ve been determined to make Alexa Hampton (award-winning interior designer, author and daughter of the inimitable Mark Hampton) my best friend ever since I interviewed her. She’s smart and glamorous, hilarious and self-deprecating – everything I love. And she’s obsessed with ancient Greece (my university major), has an arsenal of concert T-shirts (my weekend wardrobe) and never leaves home without a book (guess what’s in my purse right now?). Hashtag kindred spirits!

Here, the designer speaks on everything from style influences to life lessons. 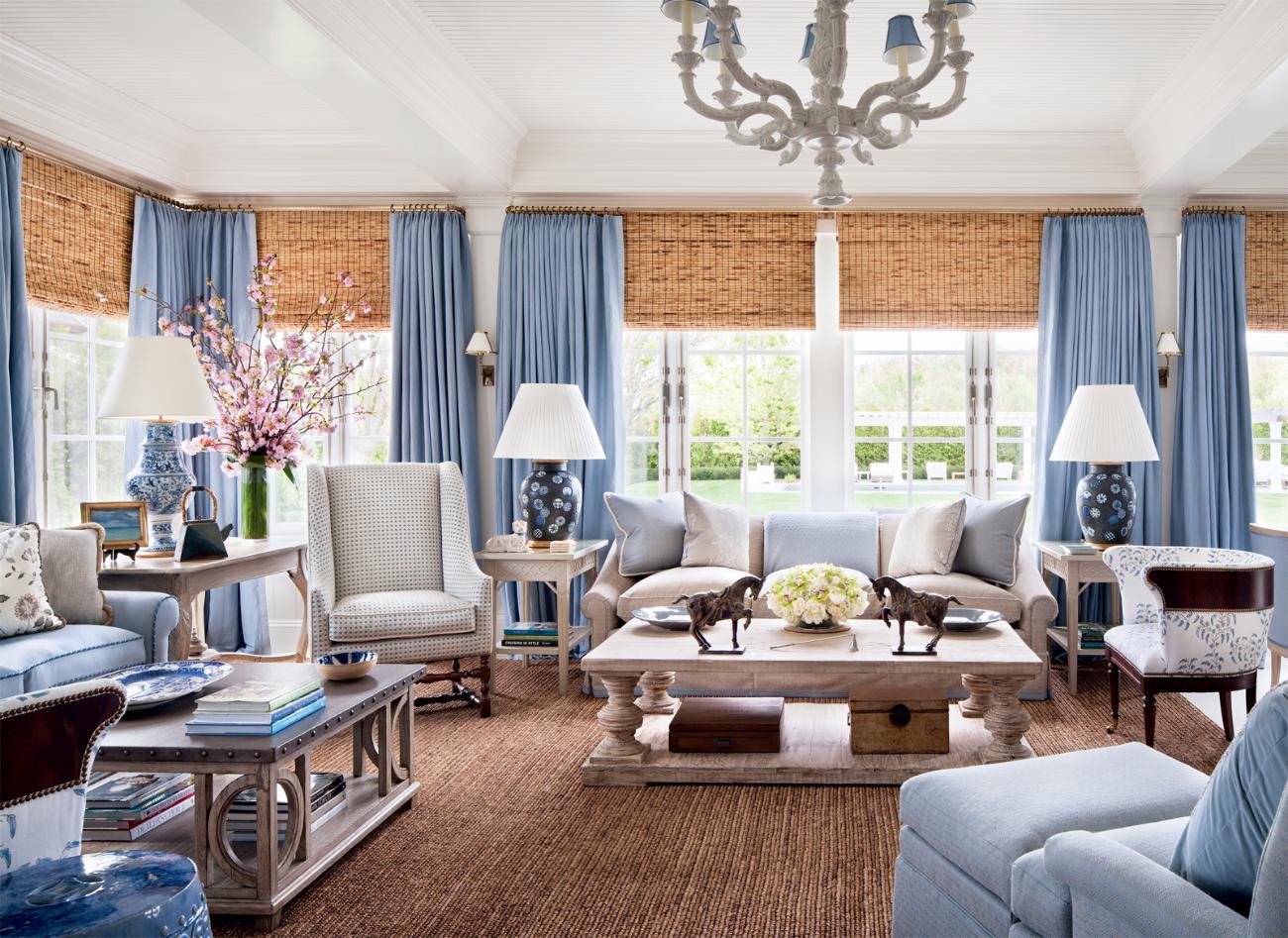 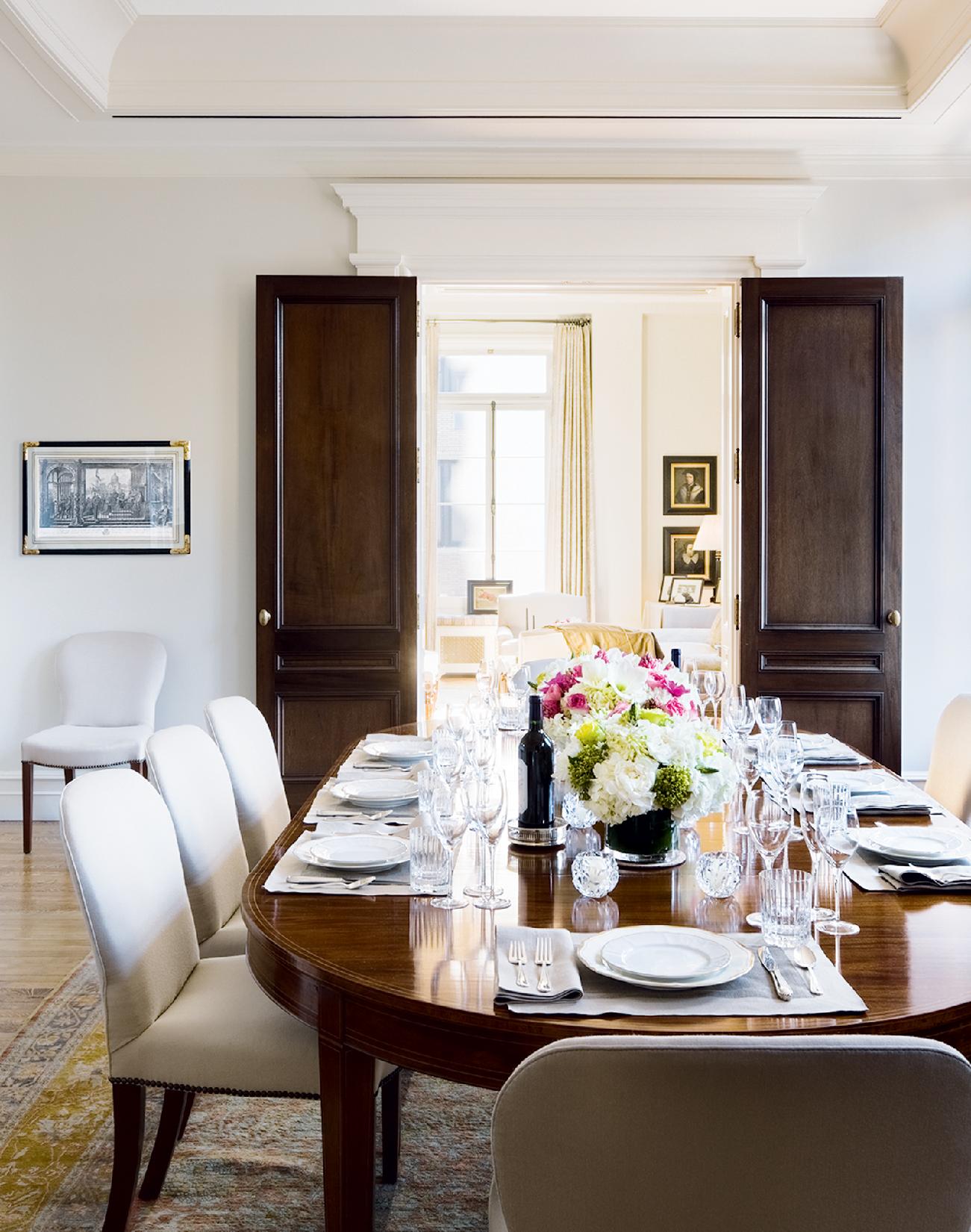 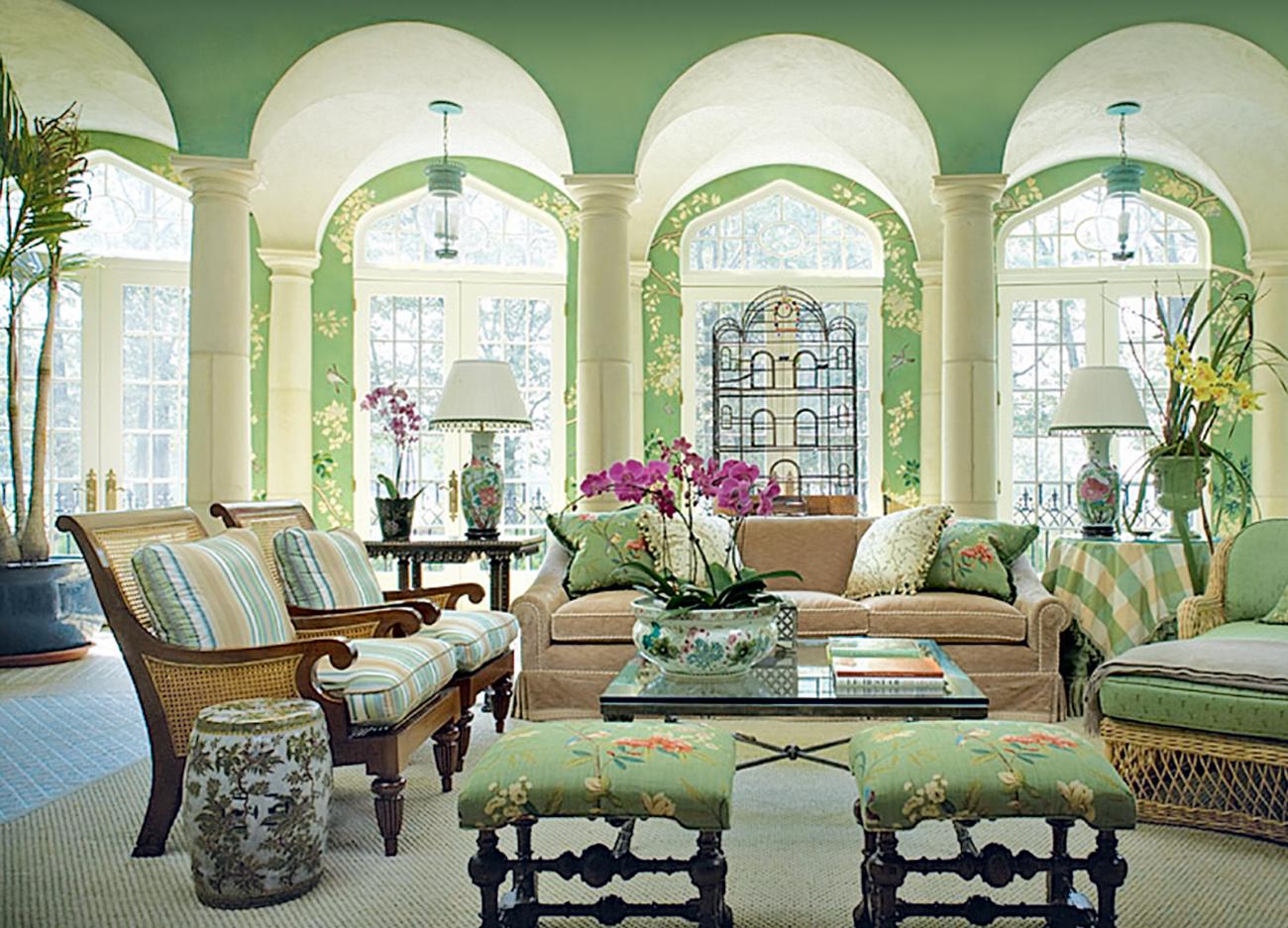 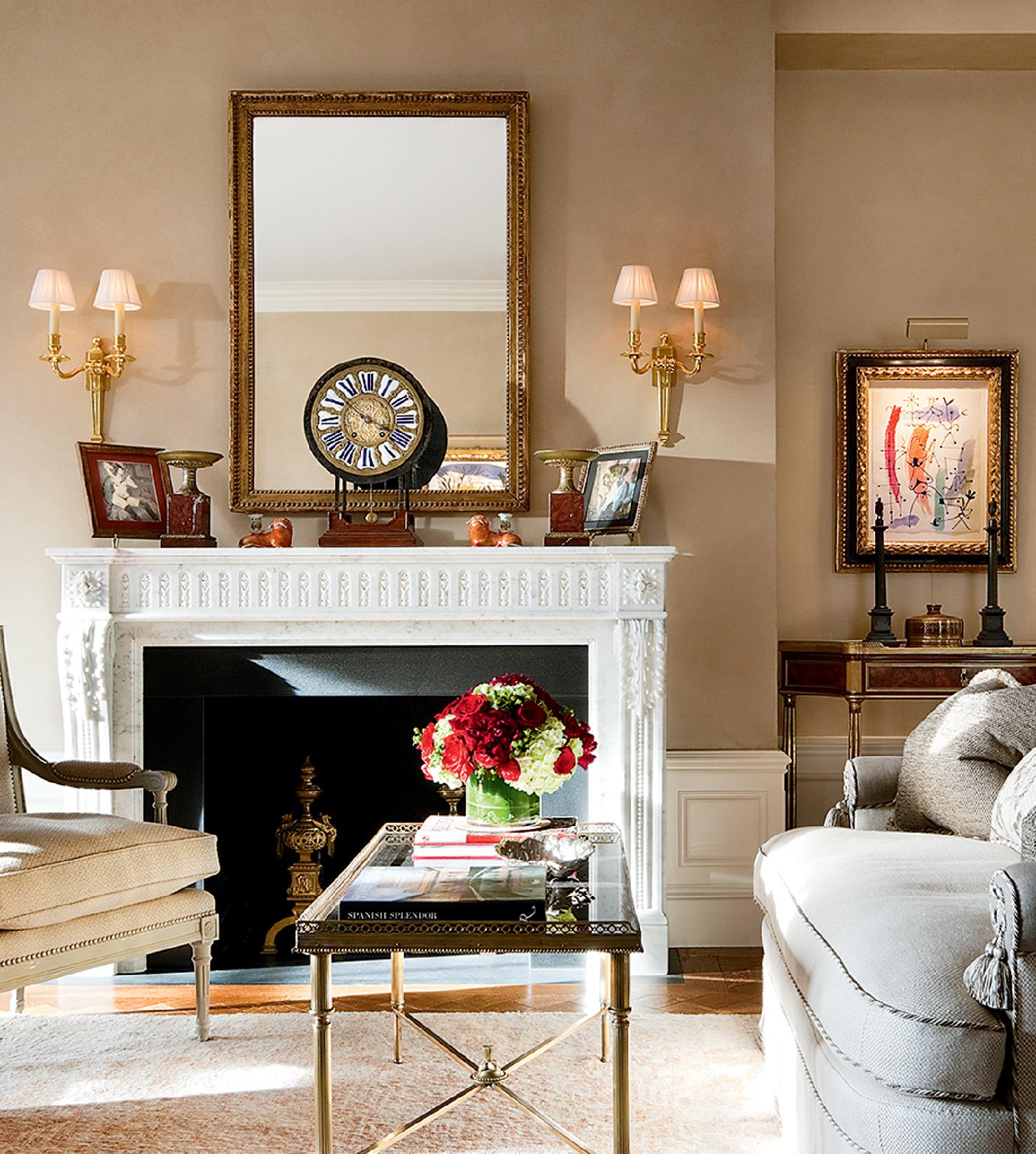 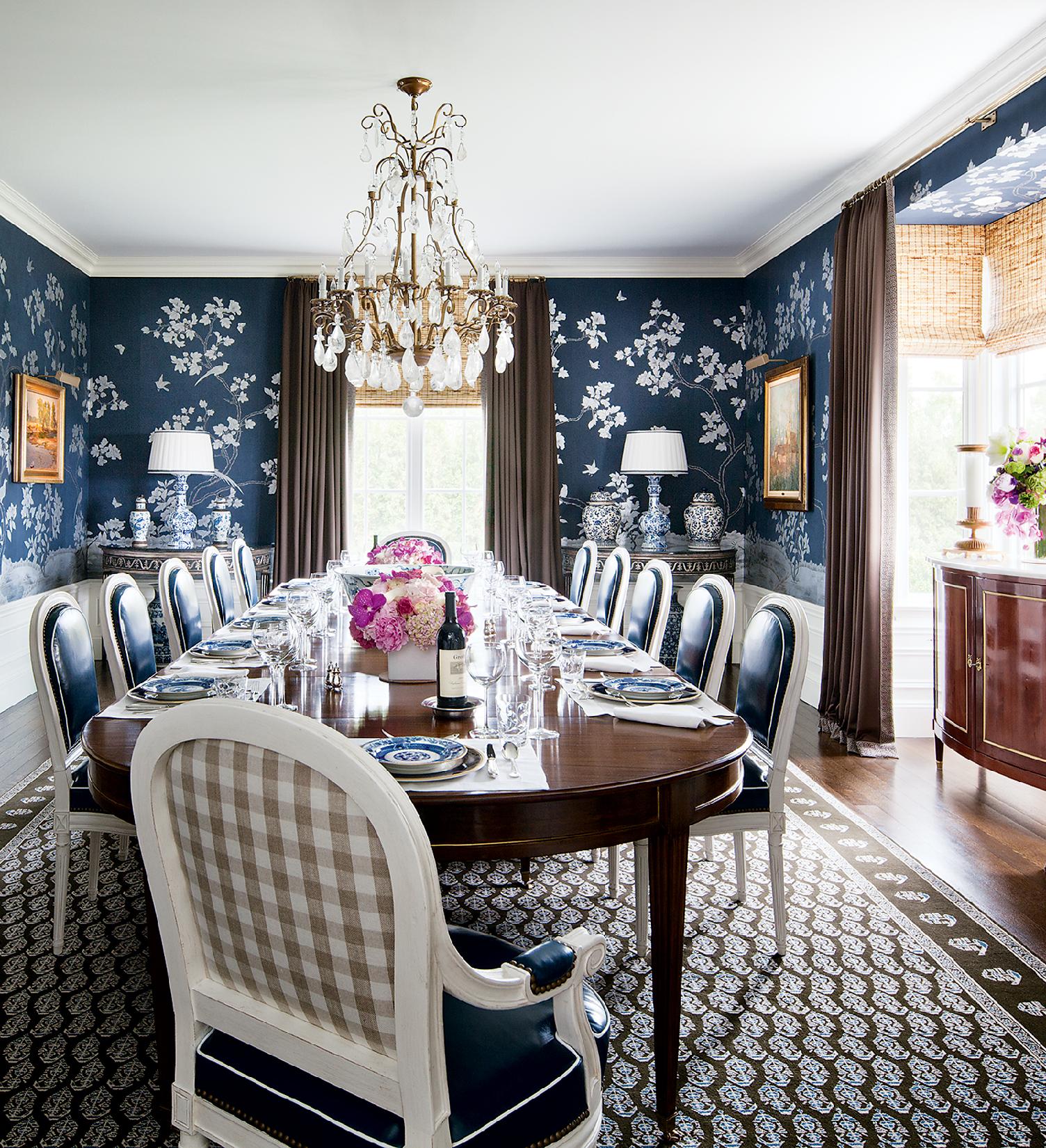 In this beach house design, casual elements, such as bamboo shades, chambray-blue drapery, mixed woods and a sisal rug, look effortlessly elegant, just like the designer herself.

The owners of this duplex hired Alexa for its redesign after working with her father more than 15 years ago – a testament to the Hampton family name.

The garden room of this New Jersey Tudor Revival residence is all about referencing the outdoors, from its green tone to the hand-painted wallpaper alive with branches and birds.

SAH: How would you describe your style?
I love modernism and classicism; I love contrast. But I’m really living vicariously through my clients. From the most whimsical house by the beach to the most modern ski house in Aspen to a traditional triplex in Manhattan, I get to work on lots of different styles. As long as it’s not ugly, I’m into it. And my sense of colour changes all the time, so I never get bored.

SAH: What colours are you loving right now?
I’m having a purple moment. It’s funny, I used to revile purple. When I was 10, all I would wear is purple, and overdoing it back then really scorched me. So I was recovering for the ensuing 30 years, and now I’ve returned! I’m trying to be a little less excessive this time around.… I don’t wear Gloria Vanderbilt purple jeans every day.

SAH: But maybe you could!
Hey – I couldn’t then. I did, but I shouldn’t have.

SAH: What are some of your earliest decor memories?
As a decorator’s daughter, my earliest memories – period – are of decor. My parents had a very groovy red living room with David Hicks patterns and white plastic cube tables, but also porphyry urns and bergère chairs – very eclectic, but super cool. I think my father was the greatest designer that ever lived.

SAH: What’s the greatest lesson he ever taught you?
To blow my nose. Oh, you mean about design? It’s really hard to tease out the threads of what began with him – I feel like everything began with him. He was very didactic and meticulous. He wanted things to be the best they could be – okay wasn’t an acceptable end goal. That was really inspiring, to see a grownup that involved and that driven. He was really possessed by his love of design. He taught me that if you take joy from what you do, the results are far better.

SAH: How often do you redesign your own home?
Not that often. I used to rearrange things all the time – it drove my husband crazy – but now I’m striving to land. I decorate ambitiously for myself – not for who I am now but for who I’d like to be. If I decorate for who I am right this second, I’m going to be over it by next year.

SAH: Give me an example.
I’m not a formal person, so my formal living room is a hilarious disconnect from who I am. I walk around in my husband’s boxer shorts and holey concert T-shirts. But I’m striving to belong in those refined rooms – maybe I should start brushing my hair before going in.

SAH: And if you weren’t a designer, what would you do?
I could be a failing artist – that would be fun.

SAH: Do you do a lot of art?
I don’t do a lot, no. But that’s why I would be a failing artist. I didn’t say I was any good or that I would do it with any regularity. I could be a great TV and movie critic. I like to think that I could be a trophy wife, but then I would have to go to the gym and fix my appearance and that’s not going to happen. Yeah…I’m just good at doing what I’m doing.

SAH: If you could live in any era, what would it be?
It’d have to be this one. I love the convenience. What would I do without my iPad? What would I dowithout indoor plumbing? And underwire bras? We have rosy nostalgia for eras other than our own, but I don’t think I could swap. I could do it for a short time – like a Renaissance fair. With my iPad checked at the door.

SAH: You could try to smuggle it in, though.
Yeah! I need a photo of that lute player.

Ask him for a selfie!