He has created florals for A-listers including Giorgio Armani, Calvin Klein, Vera Wang and, of course, his friend Martha (Stewart, that is), who wrote the foreword to Simply Elegant Flowers with Michael George ($30 US, North Light Books, 2008). Michael, who has more than five decades of experience, also owns two flower stores and is the artistic director at the prestigious FlowerSchool New York.

Style at Home What is it that flowers bring to people?
Michael George It's a quality of life issue, really. Having flowers at home brings us back to the organic side of our reality. We've moved so far away from that. I'm trying to put the "culture" in culture. My approach, which I call quattro stagione, or "four seasons," is a simple way for us to tune into what's real in life and to bring that into our homes.

S@H About quattro stagione -- your book explains how to use the four stages of nature to inspire floral creations.
MG Well, here's the thing: nature gets it right all the time. When autumn comes and the leaves start to change colours, I watch. Sometimes there's more fuchsia, sometimes more orange. I take my lead from that. When arranging flowers, look at the flower in its plant form, see how it grows, and use that to inspire the form of your flower bouquet. Why overstylize something that's already perfect? The purpose of my book is to demystify flower arranging, as Martha Stewart has. It's not rocket science. I want people to get their hands dirty. You know, when I was going through some bad times, I had this overwhelming urge to weed and work in the garden. Sounds weird, doesn't it? But I needed to get my hands dirty, and while I weeded, I worked things out. The same is true for most people; when you're working with flowers, you're happier than when you're just looking at them. 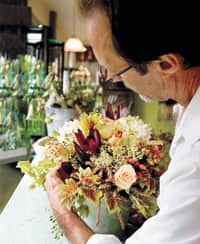 S@H You're talking yourself out of a job here, you know.
MG Look, the retail flower shop is dying. You have online services that you can order from, or you can stop at the grocery store or even a corner store to buy flowers. The costs of providing the flower-arranging service and staffing are becoming impractical. You have to move with the times; to stay relevant and survive, you really have to adapt. Evolution is a key word. Today, we're a hybridization of influences -- geographically, politically and spiritually. For instance, recently I was hired to do the flowers for a Jewish-Chinese wedding that took place in 21 Club, a famous nightclub in downtown New York!

S@H So what did you do?
MG I used roses, rose foliage, and oranges (which mean good luck to the Chinese), and draped the chuppah with a red satin bedspread that had a golden dragon on it.

S@H Simplicity is a word that's often applied to your work. Is that what makes your arrangements so modern?
MG The simplicity and monochromatic nature of my work is in line with the evolution of fashion and style, which are becoming simpler and more natural. My look is minimal, neat and monofloral, which is what makes it modern.

S@H In Simply Elegant Flowers, you relate how the time your father spent in postwar Japan influenced his own floral creations. Like father, like son?

MG Yes! I was married to a Japanese woman for 10 years, and she had quite a huge influence on me. I learned how to really see the simplicity in the beauty of nature. But I needed to learn how to translate that into arrangements that would speak to Americans, who just aren't culturally attuned to simplicity or minimalism. Abundance is key. I started doing low domes using a single flower type, arranging the stems like pencils in a jar.

S@H You've written about how, as a baby, you crawled among the fallen petals and stems at your father's flower shop and how, as you grew, the flowers seemed to speak to you. For those of us who don't speak "flower" as a first language, what advice do you have?
MG Handle flowers to familiarize yourself with them, look at them and how they grow, and read books about them. Nothing from nature is undesirable, whether it's grasses, pea pods or berries, so don't rule anything out.

S@H Bringing a hostess flowers is never clichéd, is it? How can we kick it up a notch and elevate the ordinary?
MG First, don't show up with flowers. We all know what it's like to entertain, and the last thing a hostess needs is one more thing to do. Now she has to deal with them, plus take coats and get drinks. Send flowers or an orchid plant the day before, so you don't risk overflowering the house. 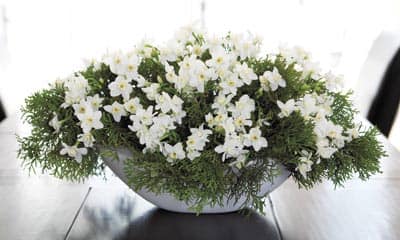