In American Hustle, an oily con man and his beautiful, treacherous partner in crime are strong-armed into cooperating with the FBI to take down corrupt politicians in this swirling comedy-meets-crime-caper, set in the late 1970s. Actor Christian Bale plays paunchy huckster Irving Rosenfeld, and Amy Adams brings to life the flame-haired faux-English con-woman, Sydney Prosser. Bradley Cooper is the twitchy FBI agent, Richie DiMaso, and Hunger Games star Jennifer Lawrence is Rosalyn Rosenfeld, Irving’s much younger wife. (And all four are Academy Award nominees for their respective performances.) They inhabit a stylish New York City and the surrounding Jersey suburbs of the disco era.

Although many period movies set in the 1970s use lots of mustard, orange, olive or avocado green and blue hues, production designer Judy Becker decided to go with a different palette. “We avoided some of the colours to emphasize the later period we were portraying and the stylishness and aspirational qualities of the characters, so we agreed on a palette that would emphasize the spectrum of yellows and gold and blues, with many neutrals,” Judy has said. Sexy, overstated materials and textures played a big role in the design as well, including acrylics, flocked and metallic wallpapers, chrome, brass, travertine and burled woods, Judy says.

American Hustle takes us on a retro trip through some of the iconic domiciles of the late 1970s and early 1980s, like the carpeted ranch house of Rosalyn Rosenfeld (anyone with a passing familiarity with the TV show The Brady Bunch is sure to have admired that ranch-style bungalow). Or the glamorous white apartment of Sydney Prosser with its parquet floor and Upper East Side address. These interiors, especially the home of the Rosenfelds', might look dated or even unfashionable to modern eyes but at the time they were the dernier cri of interior design. 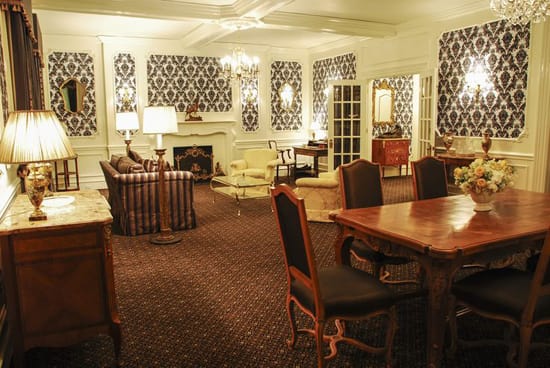 1 The Plaza Hotel suite
The year 2013 saw the famous Plaza Hotel, a NYC stalwart, featured not only in this movie but also in Academy Award nominated The Great Gatsby. In this film, the Plaza’s walls are dressed up in flocked damask wallpaper. Production designer Judy Becker and her decorator Heather Loeffler studied photos of the Plaza from the 1960s and 1970s. In keeping with the film’s colours, they chose tones of neutrals and blue. “I wanted a high contrast wallpaper so that the flocking would be noticeable and chose navy on a pale blue, instead of black and white as more period accurate,” Judy says in an interview. The design team had this wallpaper custom-manufactured for the set. A line of thin gold-leaf trim adorns most of the moldings and trim in the Plaza suite, to add a subliminal touch of luxury, Judy has said. 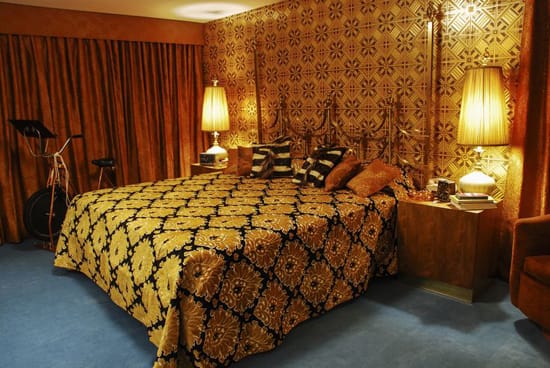 2 Rosalyn’s ranch bedroom
Like the character herself, Rosalyn Rosenfeld’s bedroom is over the top. The inspiration for the bedroom, Judy says, was a vintage black and gold bedspread sourced from Brooklyn Flea, a huge flea market in Fort Greene, New York. “We picked a wallpaper that kind of clashed with it but went with it, and we got a brass headboard. The trick was to make it feel like a unified whole, but not so over-the-top that you don’t believe it,” she has said in an interview about the sets. Wall-to-wall carpeting in blue, a brass bed, and matching bedside lamps with ruched lampshades bring the realistic fixtures of the 1970s to the room. 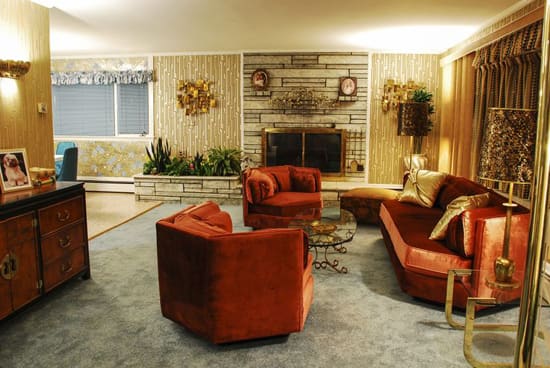 3 The Rosenfelds’ ranch living room
The essential colours of American Hustle’s various sets are blue, gold and brown. Nowhere are they more evident and on full display than in Rosalyn and Irving’s suburban living room in a ranch-style house. Blue carpeting carries over from the bedroom, golds and browns decorate the walls in the form of wallpaper and sculpture, but burnished red velvet seating deliberately throws off the colour scheme. Why? Because Rosalyn’s decorating style is maximalist and brash, suitably a little bit off-kilter to go with her zany personality. The flat angelstone brickwork fireplace is immediately recognizable to anyone who has ever lived in, or even visited a 1960s or 1970s-era home in North America. 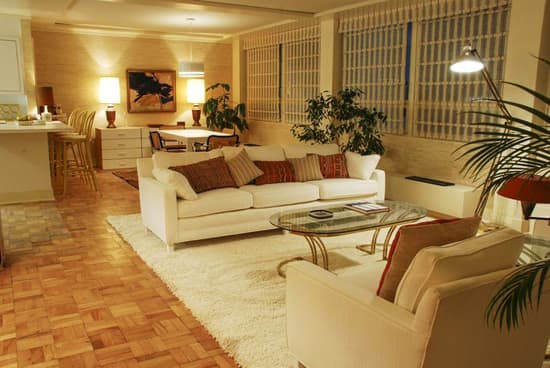 4 Sydney Prosser’s white living room
In the film, Sydney fronts as an urban, sexually liberated Cosmo woman, the type of disco-era It Girl who dances at Studio 54 at night. So it stands to reason that this con artist also has the swishest, glossiest apartment in the film. Grasscloth wallcoverings, light-wood parquet floors, a thick white rug with white sofa and chairs lend her uptown Manhattan home a sophisticated, clean air that looks surprisingly modern compared to the purposefully baroque sets in the rest of American Hustle. For authentic inspiration, Judy and the production design team consulted archival issues of Interior Design magazine, which was published in the late 1970s. 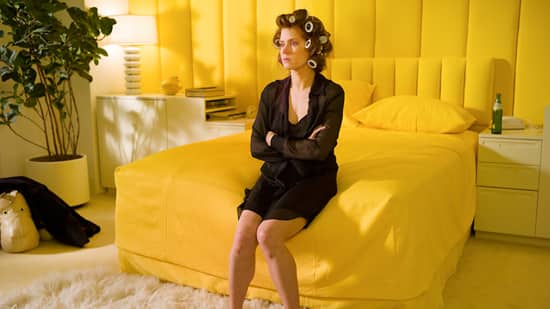 5 Sydney Prosser’s bedroom
In stark contrast to Rosalyn Irving’s flashy-clashy bedroom decor style, Sydney’s bedroom is all minimal lines and sunny yellow, elements that foreshadow the cleaner design lines of the impending early 1980s. The lines of the padded low headboard are reverberated in the luxe, matching padded wall behind it, all in happy yellow tones. A tailored bedspread in yellow crepe adds texture to the bedroom, as does a shaggy white Flokati rug. Useful meets beautiful in the chic white bedside cabinets that would look at home right now in the showroom of upscale Italian acrylic furniture maker Kartell. 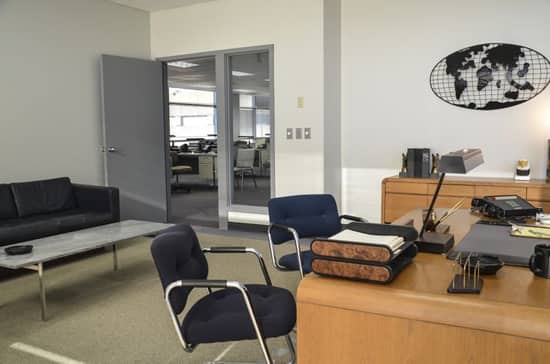 6 FBI office
Though American Hustle takes place in the late 1970s, still stuck in the 1960s is this FBI office set. The production crew found an empty floor in a real 1960s-era office building in Worcester, Massachusetts to build this set. What’s striking is how the cycle of design is such that the colder feel and the stark lines of the mid-century modern furniture, like the marble coffee table and the black sofa, make this room feel more modern than the others in the film. Though gray is used extensively though the office to give it an institutional feel, the use of blue fabric on the side chairs ties this room into the others in the set, where blue is used as one of the primary colours in the film.