During the heyday of the show Friends, fans of the show fantasized about living in Manhattan in Monica Geller’s spacious (by New York standards) flat. And now the entire series is available on Netflix in Canada, so the show is in the midst of a huge revival for those of us re-watching the antics of the characters Monica, Joey, Phoebe, Chandler, Rachel and Ross. It’s also sure to find a brand new audience, too.

Monica’s apartment -- she goes through various roommates and eventually is married by the end of the series -- stays pretty much the same throughout the ten seasons of the show. Production designer Greg Grande takes credit for the apartment’s eclectic, almost folksy look. In interviews, Greg has said the look came from the consideration that these struggling Generation X-type characters work hard to make ends meet, but still had fantastic taste. “Their furnishings came from swap meets, thrift stores,” he has said. “So, what I did with that was basically create this eclectic feeling where each piece is interesting in its own right, but that doesn't necessarily mean it came from a showroom. It came from the swap meet, the thrift store, Pottery Barn,” he added in a now-archived interview we dug up from NBC.com.

Here’s a look into that famous apartment, and here’s a bit of Friends’ set trivia. In early shows, Monica’s apartment number was 5, but in later years it was switched to 20 to show that she lived on a high floor. 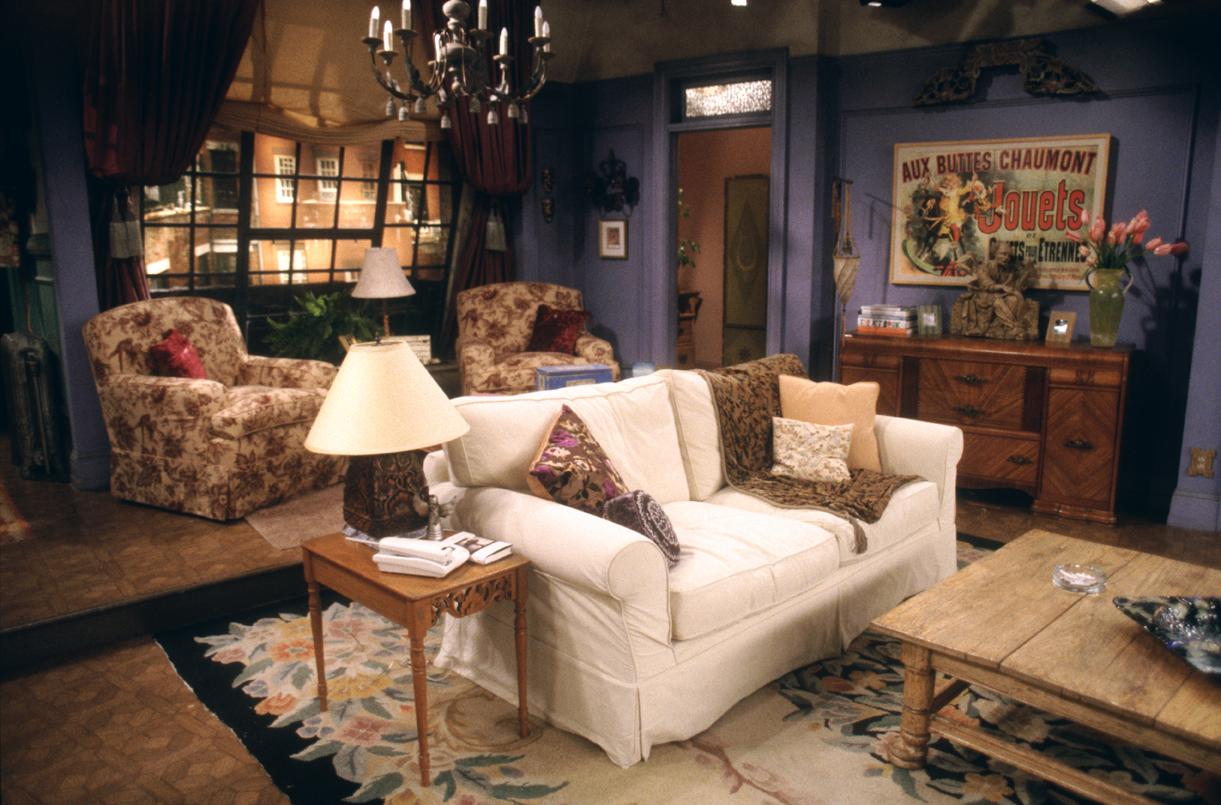 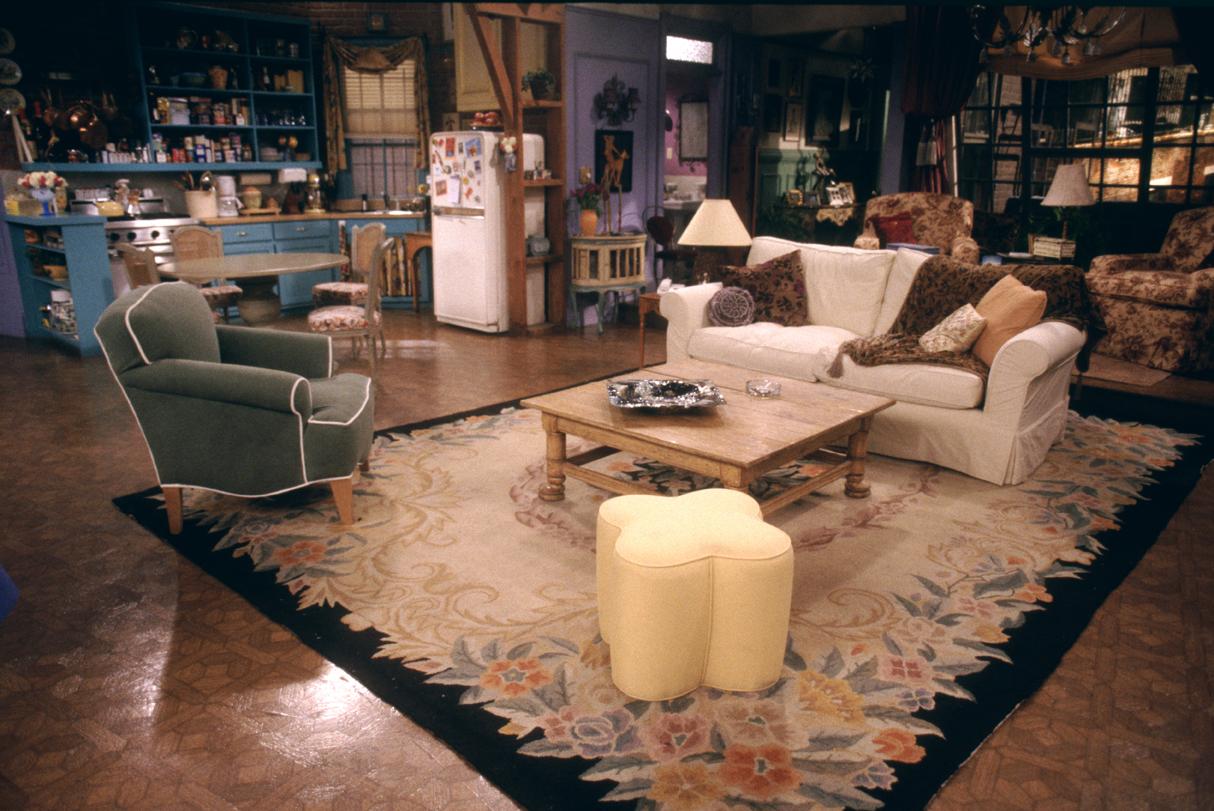 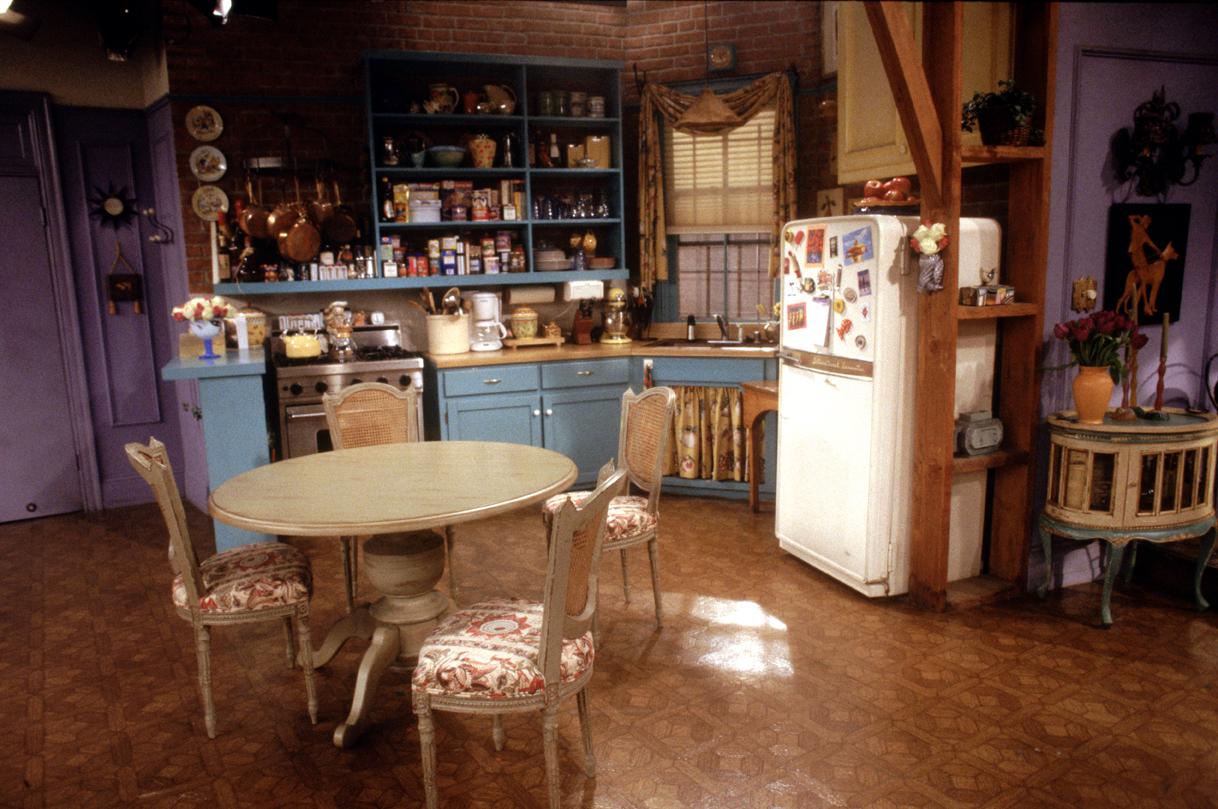 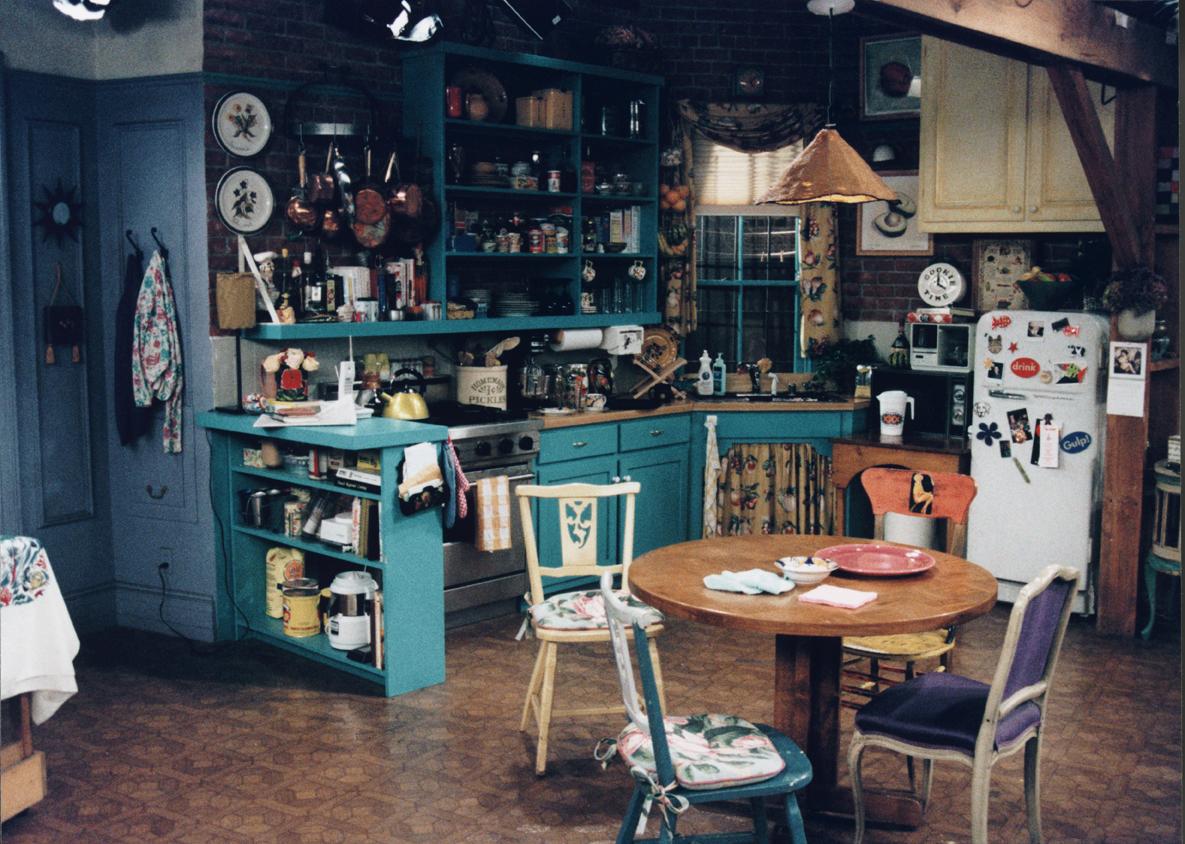 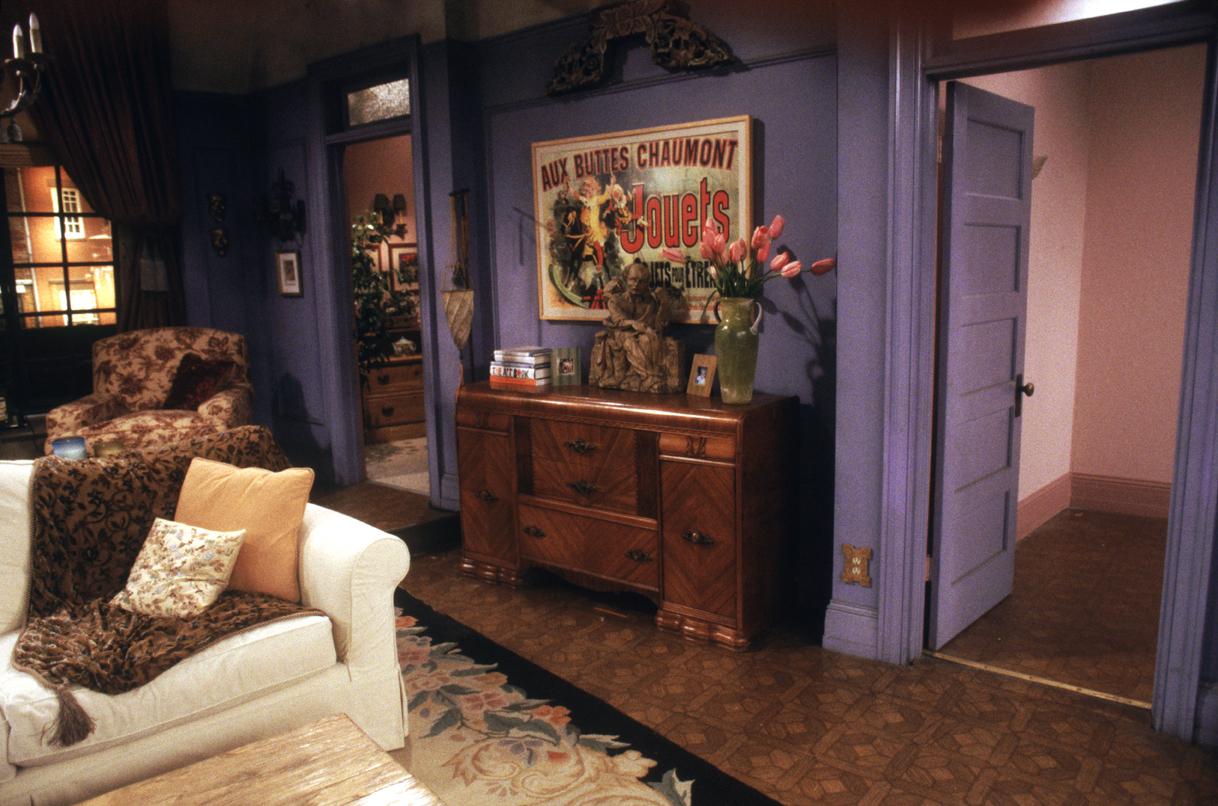 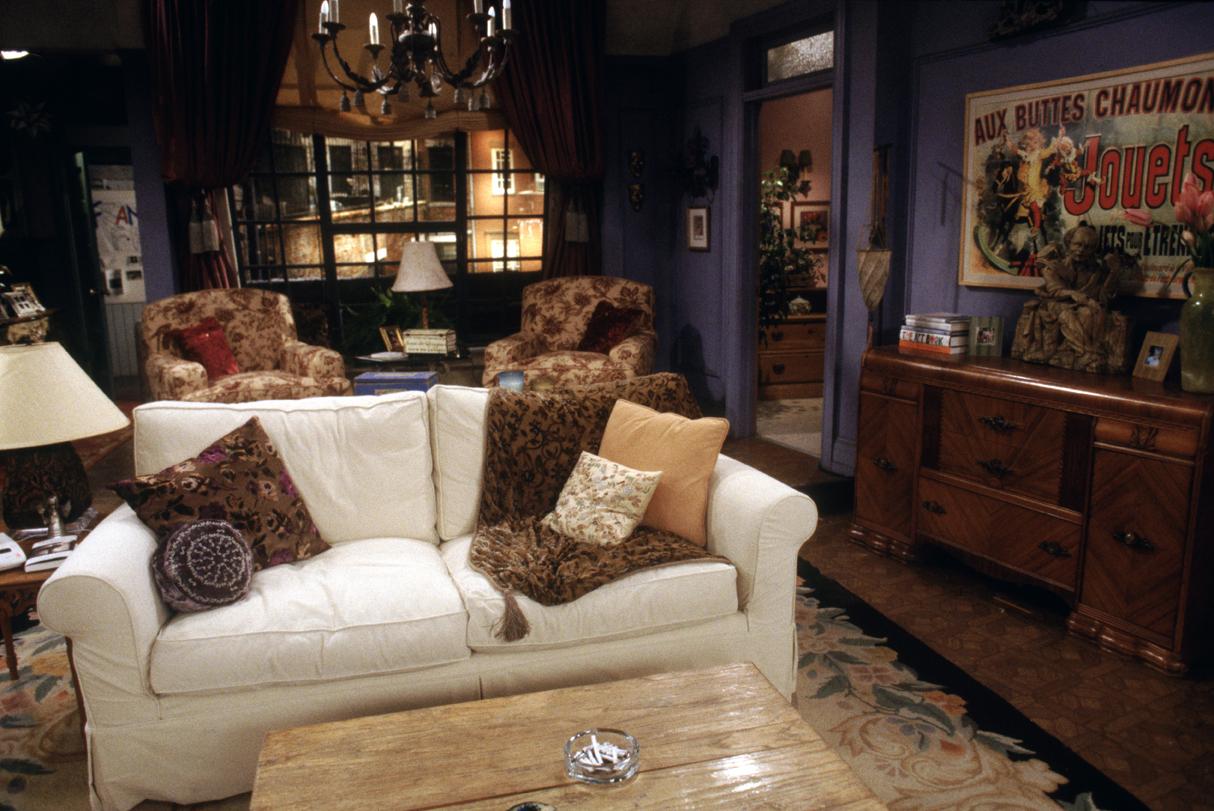 “The great thing is that [the Friends sets] for the most part are set. You don't have to do much but maintenance,” said Greg, who has gone on to design the set of Joey and recently the corporate offices of SnapChat, the makers of the hugely popular app. For instance, Monica’s creamy white roll-arm couch is a staple through many of the seasons of the show. You can still purchase the dead ringer of this sofa at Pottery Barn, the PB Comfort Roll Arm Slipcover Box Edge Cushion Sofa, from $1,577.

Sure, the medium-purple wall colour isn’t in style anymore, nor is the black-edged floral print rug, but nearly everything in this apartment has stood the test of time and looks great. For instance, the coffee table. It’s a large square shape in a rustic natural finish with sculpted legs, and it fits in perfectly in this casual space. Restoration Hardware offers a similar version called the Balustrade Salvaged Wood coffee table, from $1,595 USD. Although not a replica, the Clara chair from Crate and Barrel provides similar proportions, as does the Dhurrie chair from Anthropologie.

A little bit French Country, a little bit bright-boho, we love that the kitchen is the heart of this home, just like it is in ours. Set designer Greg Grande shopped at the store Williams-Sonoma as a source for many of the items in the kitchen, as the character Monica is a chef. Another element of the kitchen that underscores that Monica works in the culinary world is the top-end range. A pedestal table and cane-back chairs add a refinement that is counterbalanced by the zingy shade of blue cabinetry. (For an updated version of this French Country pedestal table, check out Restoration Hardware.)

The cozy proliferation of kitchenware, small appliances and even cans of food and boxes of pasta made the kitchen in Friends feel real, even down to the wooden dish rack and under-the-cabinet paper towel holder. On the show, Monica sublets this rent-controlled apartment from her grandmother, which explains why even the kitchen space is a good deal more generous than the tiny spaces that most young New Yorkers can afford to rent. Williams-Sonoma was a source for many of the kitchen items, and you can find Monica’s Mauviel copper saucepans there, or a set of botanical plates such as the ones that grace the exposed brick and even the striped dishtowel.

Today we’re used to seeing an antique or vintage chest of drawers in a hallway or a living room, but at the inception of Friends in 1994, it was definitely a more rare choice than it is now. Whether it belonged to Monica’s grandmother on the show or whether it was something she might have picked out at a thrift shop (though we’re quite sure a thrift or vintage shop is where her character would have sourced the framed French poster), we don’t know. What we do know is that it adds a lot of character and function to the wall space between the two bedrooms. Even tiny details, like an ornate electrical socket cover, reflect an attention to detail that suggests that Monica is totally into accessories and decor. (You can find similarly antique-look iron switchplates and covers at Anthropologie.)

The back-of-stage window nook, framed with theatrical velvet curtains, plays only a small role throughout the series of Friends (though it does take centre stage in the recurring scenes featuring “Ugly Naked Guy”). The comfy armchairs change through the seasons of the show, mixing it up between traditional and modern. “I feel like that's always been my forte to mix classic and modern pieces,” set designer Greg Grande has said. “That's been what’s happening in Monica's apartment. I feel like, in a lot of ways, we've changed the way television is being decorated.” These armchairs bring to mind Ikea’s iconic, ultra-comfy Ektorp series, like this floral-pattern Jennylund armchair.