Director Wes Anderson is known for making hypnotically rich and detailed films with a lot of quirkiness thrown in for effect (for instance The Royal Tenenbaums, The Darjeeling Limited) the pinnacle of which, arguably, is The Grand Budapest Hotel. Set in the fictional country of Zubrowka, the movie is a caper-slash-memoir of young lobby boy’s coming of age. Design-wise, it takes the audience on an impressively scaled journey into the elegance of the jazz-age 1920s and 30s, with a touch of some brutalist architecture elements of the 1960s thrown in.

The set designer of this 2014 movie that is nominated for seven Academy Awards is Adam Stockhausen, who also created the historic Oscar-nominated sets of 12 Years a Slave. To get the look, he spent time visiting eastern Germany, Saxony and the Czech Republic. “We went around and looked at all these places that were magnificent and original; there were some places that were really derelict, there were some places that had been renovated in a sort of a Brutalist, painful way, and we tried to pull details from all of that and swirl it all together in our own country of Zubrowka,” he said in an interview with The Dissolve.

The Grand Budapest Hotel is a film that sticks in your mind for its dramatic scale, its use of colour, and its glorious theatricality. One almost wants to pause each scene to drink it up and explore every corner of the frame. (It’s on Netflix now, so you can actually do that if you wish. We’re not judging you.) Here are some of the memorable, award-nominated sets from this movie: 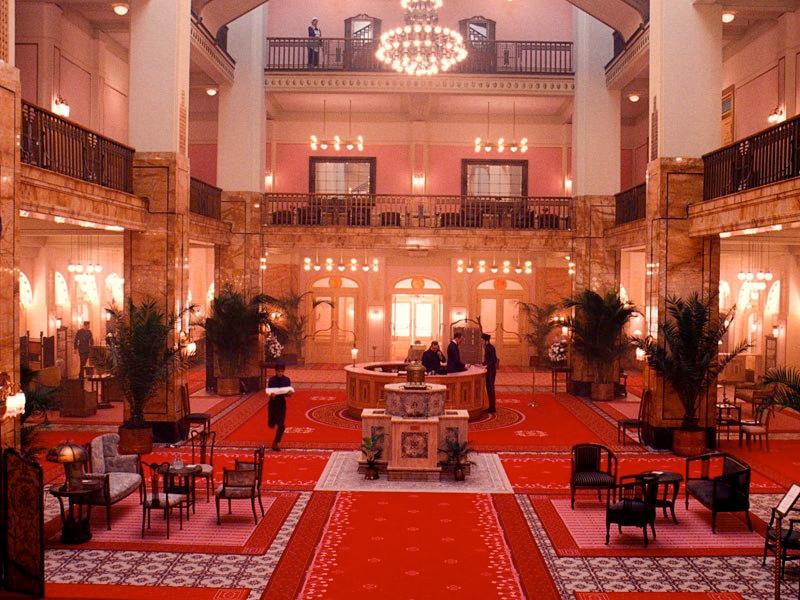 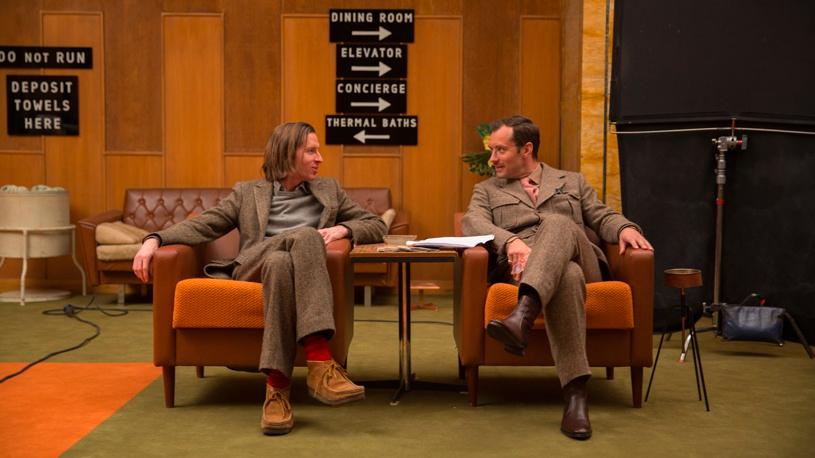 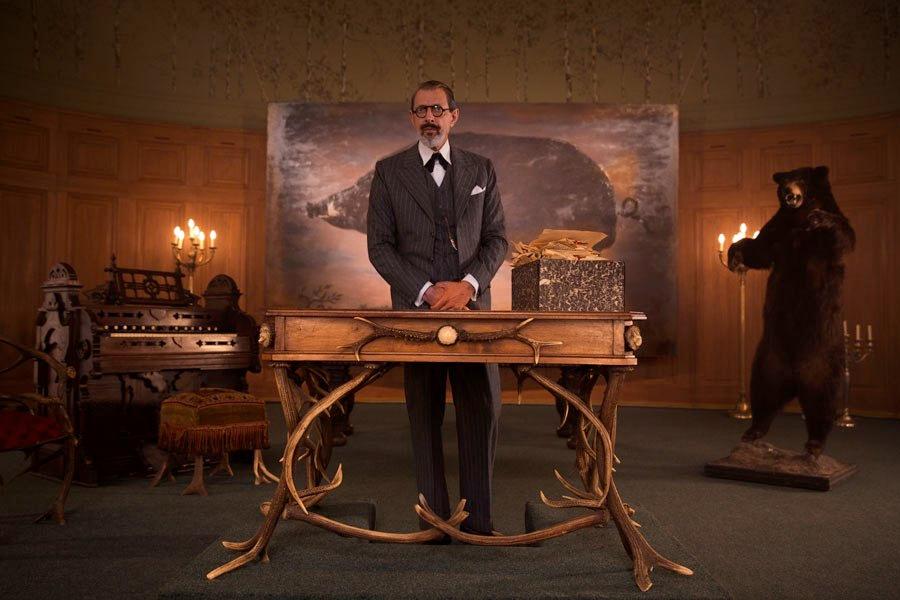 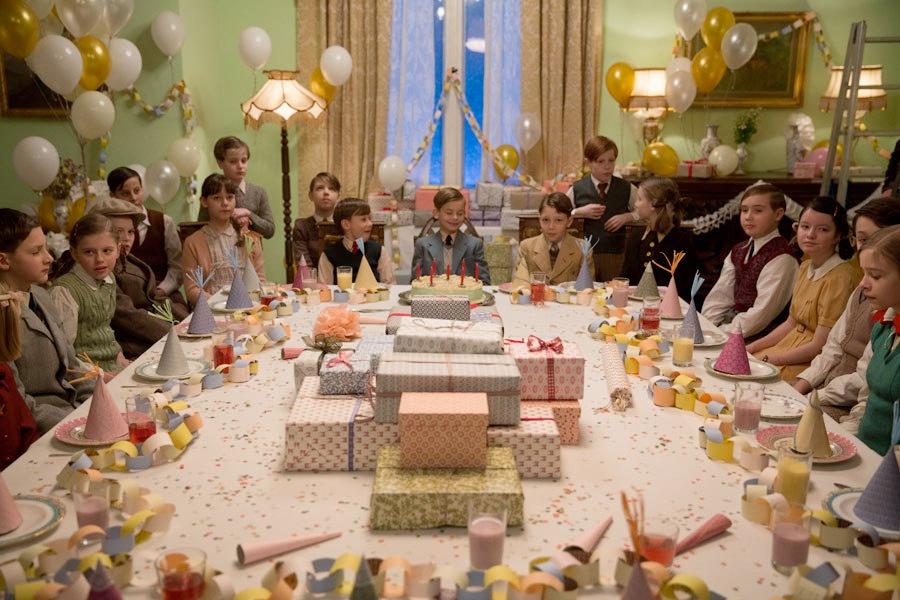 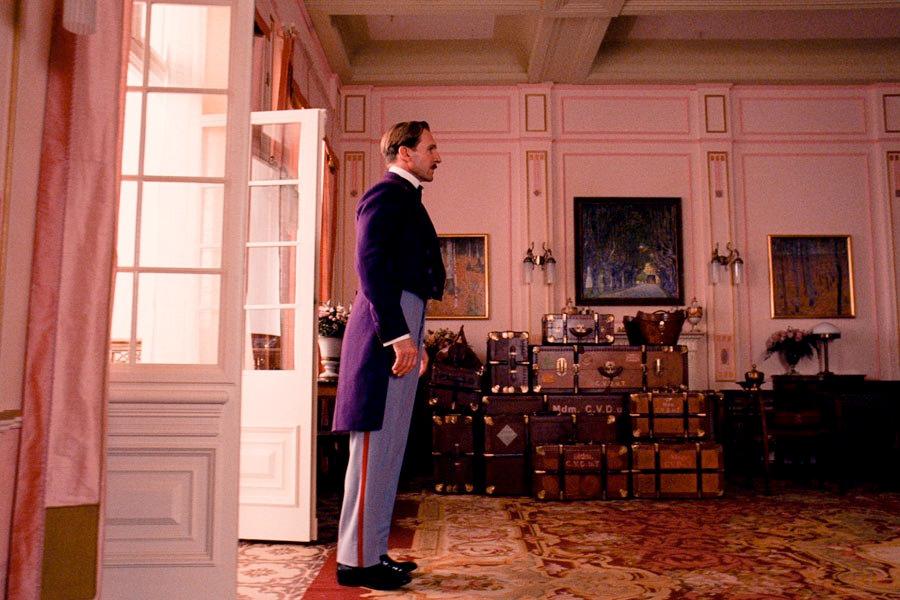 The main set for the suitably grand hotel lobby of the film’s namesake is not a studio, rather, it’s a department store in Goerlitz, Germany. What meets the eye as simply “European” or “Art Nouveau-ish” is actually, on closer inspection and research, not quite all there is to this luxe space. The German artistic style Jugendstil (popular from the mid-1890s to the early 20th century) was the primary influence for the hotel’s decor, according to Architectural Digest. “It’s an interesting style with a lot of variation, not as singular as Art Deco or even the classic Art Nouveau I was used to seeing in books,” said Adam in Architectural Digest. Layers of red carpets provide richness and contrast to the heavily veined stone pillars. And chandeliers, instead of dripping crystals, are simple globe shapes. Restoration Hardware’s Mason Glass Globe pendant brings these to mind.

Director Wes Anderson is known for the depth of his vision and the charmingly over-the-top worlds he creates on film. Anderson chats with Jude Law on the set of the lobby in later years, which is meant to be faded in glory but still large in scale. The greens tones, along with browns and oranges recall the 1960s, and in this film, it also evokes the Brutalist design style of that era in former Eastern European Communist countries. Brown vinyl seating, wood panelling and wall-to-wall two-tone carpeting underscore the look.

We’re guessing “authentic hunting lodge” is not a look you’ll be copying for your own home, but in the gothic estate of the film’s antagonists, this trophy room plays a pivotal part in the plot and it’s suitably macabre. The antler desk is an antique sourced at a German shop. ““We looked at trophy rooms in centuries-old royal hunting villas across Germany and the Czech Republic. They are astonishing,” Adam has said. One idea we do like, however, is the enormous canvas layered in front of wood panelling, fronted by an antique desk.

Although we get to see them fleetingly, some of the pastel sets on the set of Grand Budapest Hotel provided a lovely contrast and resonance to the darker sets and scenes. This birthday party scene is set in the 1930s at nearly the height of the grandeur of the hotel. Depression-era mint green walls are a focus, but so is the lovely and simple birthday table that you could re-create quite easily for a vintage-style party. For instance, a paper garland in pastel construction paper rings the table, a white tablecloth is sprinkled with confetti, and gold, white and silver balloons complete the look. Adorable children with perfectly coiffed hair not included.

A huge Persian rug, gorgeous French doors, panelled walls and coffered ceilings put the grand in the hotel’s name. The set designers have said that they used the Library of Congress’s Photochrom Prints Collection to get inspired and pull ideas from for this movie set. Monogrammed suitcases were de rigeur for the moneyed set who would have travelled to mountain retreats and spas such as this one. The splendid visual appeal of stacked vintage suitcases endures, vintage versions are easy to find, and luggage-makers such as Louis Vuitton still monogram luggage if your pocketbook is so inclined.