Tour the set: The Great Gatsby Author: Style At Home

The glitter and excess of the Roaring Twenties come to life in the 2013 film The Great Gatsby. Based on the novel of the same name, it’s a testament to writer F. Scott Fitzgerald’s skill that nearly a hundred years later, Jay Gatsby’s life of conspicuous consumption and his reckless, ill-fated quest for the admiration and love of an unattainable woman, Daisy Buchanan, still play as thoroughly modern themes. The beautiful movie interiors of this luscious film, starring Leonardo DiCaprio and Carey Mulligan, reflect this up-to-date sensibility.

Although this is a period film set in the 1920s, set designer Catherine Martin created rooms that were “vibrant, sexy, visceral and modern,” she has said. Martin, who is married to the film’s director, Baz Luhrmann, achieved this look by creating a world drenched in colour, pattern, layers, and depth. It’s an idealized, highly stylized version of flapper-era New York City (film buffs might be interested to know the entire movie was filmed in Australia) that has earned Martin an Academy Award nomination for her evocative production and costume design. 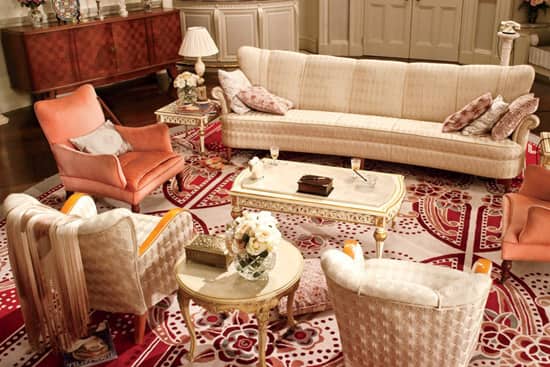 1 Daisy Buchanan’s sitting room
It’s fitting that wealthy Daisy Buchanan would be the mistress of this elegant sitting room that would look up-to-date in a ritzy Park Avenue apartment today. It’s full of muted colours and fabrics (except for the rug), from romantic dusty rose velvet armchairs to the sofa and chairs covered in silky off-white brocade. The sitting room is entirely Hollywood Glam meets Art Deco, anchored by the aforementioned bold circle rug in graphic 20s-era florals. To create the interiors and the fashions, production designer Catherine Martin says she visited museums and the Met library in New York City, among other sources, the most important of which she credits as the book itself. 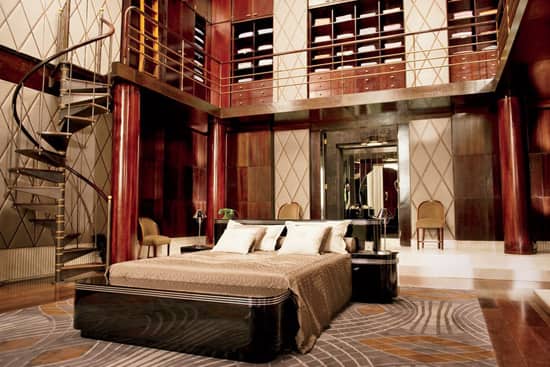 2 Jay Gatsby’s master bedroom
Catherine Martin comes by her knowledge of Jazz Era architecture honestly, having partly grown up in her family’s Art Deco home in France. No surprise then, that Gatsby’s sleek bedroom is full of authentic touches of this aesthetic. Geometric modernism is fully at play in the paneling of the walls, the pattern on the bedding and even the brown and silver rug in this swanky lair. This look is one you can bring home, as Martin recently launched Metropolis, a line of Art Deco-infused fabrics and wallpapers she designed for the New Zealand company Mokum, available through designers. 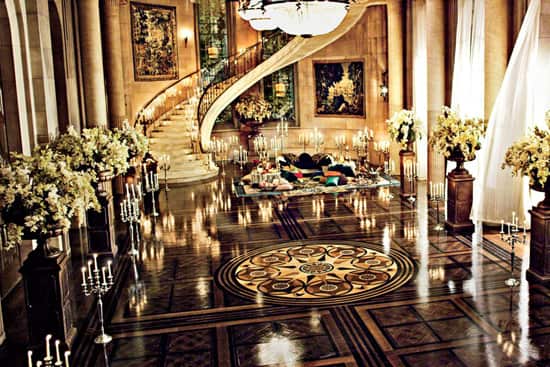 3 Ballroom in Gatsby’s mansion
The grand ballroom in Jay Gatsby’s mansion is meant to drop jaws—or at least catch an elusive married flapper by the name of Daisy, and that’s exactly what it does. It’s worthy of a five-star Paris hotel! What makes it opulent and timeless is the use of patina-rich stone walls, towering pillars, and a gleaming inlaid wood-and-stone floor. "On the one hand it's a sad, lonely Gothic house, but it's also a house of great wealth and beauty," production and costume designer Martin has said in an interview. "It had to encapsulate Gatsby's extraordinary ambitions and his optimistic, romantic soul," she says. Proving you can create an intimate nook in any space, a low-slung Morocco-influenced seating area with jewel tone fabrics is tucked under the enormous winding staircase. 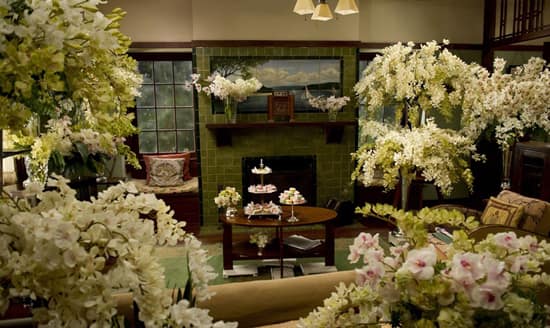 4 Nick Carraway’s flower-filled cottage
The Arts and Crafts movement’s heyday would have taken place at least a decade before the Great Gatsby takes place, so it’s apt that narrator Nick Carraway’s older, comfortable rented house would be in this architectural style. In Carraway’s living room, a simple green-tiled fireplace almost succeeds in taking the focus off the cascading bouquets of white flowers in the important Gatsby-Buchanan reunion scene. The warm democracy of American Craftsman style (Craftsman style is the American iteration of Arts & Crafts style) means that coffee tables and chandeliers like these are still popular. 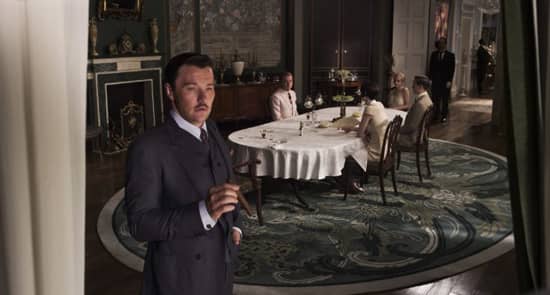 5 The Buchanan dining room
The Buchanan’s dining room is formal. It’s the room of an old-money family complete with crisp white linens, wait staff, a generous oval table, and antiques—inherited, of course—throughout. The one nod to the 1920s in the otherwise classic room is the oval rug, which echoes the lovely bright rug in the Buchanans’ sitting room. Its feather motif riffs on the fashion of the time, when the stylish speakeasy-going woman would wear feathers in her hair for a night out on the town.

Tour the set: The Great Gatsby