Tour the set: The Wolf of Wall Street Author: Style At Home

The title of this 2013 film fairly neatly sums up the main character Jordan Belfort, played by Leonardo DiCaprio (who also stars in The Great Gatsby, another Academy Award nominated film). Indeed, Jordan’s wolf-like hunger for money and penchant for fraud in the world of finance take him to stratospheric heights. Of course, what goes up must come down, but it’s quite the spectacle to see how high Jordan flies -- propelled by crooked stock brokering, an excess of designer drugs, trophy wives, and some breathtaking sets.

Set in the early 1990s, production designer Bob Shaw worked with director Martin Scorsese to find the perfect locales for The Wolf of Wall Street. (The salient homes of the movie are real homes that were rented out for the film, not studios, including the beach house, the penthouse and the country mansion.) If the houses of this film look strikingly modern, plus a little bit Real Housewives of Wherever, they’re meant to. The 90s was the height of postmodernism, Bob has said, and the beginning of the ascent of the McMansion, the big, soulless monster homes built by people with more money than modesty.

While the Hamptons beach house is contemporary and the Manhattan penthouse is modern, Jordan’s country house where he lives with his second wife, Naomi, differs from the pack. “She’s someone who was very aspirational and I think when Jordan marries her he also acquires her taste,” Bob has said in an interview. “She has a sort of Ralph Lauren aesthetic and I think wants the family to look like the landed gentry. She wants the house to look like old money, so there’s plenty of shabby chic,” he added.

1 Hamptons beach house
The production team chose this house, which is actually in Sand Point, New York and not the Hamptons, for its contemporary Malibu look. It’s a house of large decks and wide balconies that are ideal for epic pool parties, and thus it would have been highly prized by Jordan, the hard-partying protagonist of the film. The hedonistic consumerism of the early 1990s is one of the stylistic themes of The Wolf of Wall Street. Size, impressiveness and costliness rather than a particular design era are emphasized in the film. “The average amount of square footage in houses suddenly doubled and it seemed nothing was ever enough. Jordan epitomizes all of that,” production designer Bob Shaw has said. 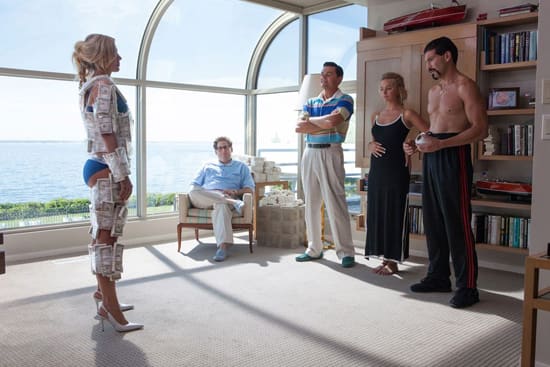 2 Inside the beach house
The Wolf of Wall Street is full of outrageous madcap scenes, like this one that’s set in the upper floor of Jordan’s beach house. (If you check out the slide before this one, you’ll see the exterior of these curved windows on the upper right hand side.) To break things up visually, production designer Bob Shaw chose a house that was light and airy on the inside, he has said, as opposed to the Hamptons beach houses that have a traditional New England decor style and in contrast to Jordan’s next house, the country mansion. The built-in bookshelves have a modern-meets- nautical design, perfect for a room that overlooks the Atlantic Ocean. 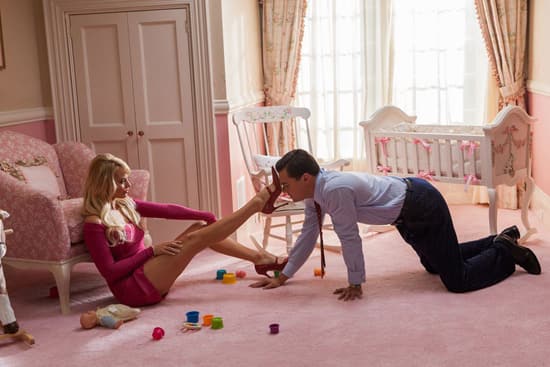 3 Nursery in the country mansion
Pink on pastel pink is the colour scheme of this sweet nursery for Naomi and Jordan’s baby Skylar. Bob envisioned the character of Naomi Lapaglia, played by Margot Robbie, as less flashy and more cultivated in her interior design style. To that end, Bob decorated the baby’s room with the most classic of shabby chic elements, such as a ruffled throw pillow and drapes, rose patterns, and even glass closet doorknobs. All in pink of course, including the impractical-but-pretty cotton candy pink carpet. 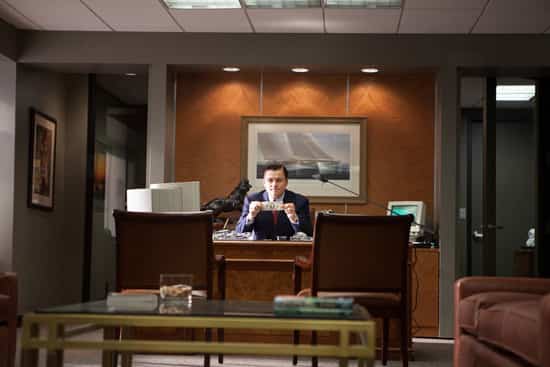 4 Jordan’s office
Actor Leonardo DiCaprio is nominated for an Academy Award for his lead role in The Wolf of Wall Street. This is his character’s posh office at his brokerage firm Stratton Oakmont at approximately the same time he was living at the country mansion. There are deliberate parallels in the decor style of his country mansion and this office. “The ‘distinguished older brokerage firm’ style goes hand in hand with his faux English gentry home,” Bob has said in an interview. Distinctly 1990s elements include big pot lights, chocolate brown leather furnishings, and burled-wood boardroom paneling.

5 Manhattan penthouse
Jordan’s penthouse is located in real life in a midtown Manhattan condo on the 31st floor, for sale at $6.5 million as of this writing. In an interesting twist that involves real estate reality TV, the agent is the dapper Ryan Serhant from Million Dollar Listing. “It feels like a loft floating above the city,” Ryan has said in an interview with the NY Daily. Presumably the new owner won’t bully guests as Jordan does (the film also includes a scene of dangling a man over the real deck in this 2,500 square foot home). Decor-wise, the furnishings in the living room are transitional in style and totally neutral, almost office-like. This comfortable setting allows the skyline of New York City to stand out.

Tour the set: The Wolf of Wall Street