Her new book, Whiskey In A Teacup, is out now!

Y’all: Reese Witherspoon has written a book, and it is just as charming, fun and interesting as she is. While most of us might think of her as pure Hollywood, the actress, producer and clothing designer (heart you, Draper James) is actually a Southerner, born-and-raised. Her new lifestyle tome, Whiskey in a Teacup, is all about extending that famous Southern hospitality and inviting her readers to share in the tips, recipes and life lessons she learned growing up in Tennessee...but updated to be incorporated into her life as a busy modern woman. While it covers everything from style to book clubs to her patented hot roller technique for big hair (of course), the heart of the book is entertaining — which is why we’ve picked our favourite hosting hints Reese shares in the book below.

Oh, and if you’re wondering about the title: Reese says that it’s inspired by a saying from her Grandmother Dorothea, who said, “it was a combination of beauty and strength that made southern women ‘whiskey in a teacup’”.

1. Don’t be a repeat offender.
It can be tempting to try and replicate a memorable bash by inviting the same crowd, adhering to the same theme, serving the same food and hoping the magic happens again. But, Reese writes, it just doesn’t work that way: “It’s never the same. Plus, unexpected surprises are part of the fun of hosting. You have to think of each party as an opportunity to make new memories.” Bonus: “Always invite one single friend! It makes conversation more lively”.

2. Don’t sweat the sweet stuff.
Want to hear a secret? Reese isn’t a big fan of making dessert when she’s hosting. “I often buy dessert, because making a cake in addition to a whole dinner is pretty intense, and I feel like it doesn’t usually add so much.” Instead, she’ll either go to the store, assemble something from pre-bought ingredients, or enlist her Mini Me daughter Ava to make her famous chocolate chip cookies.

3. Ring the bell.
Reese is a big fan of making sitting down to a meal (whether it’s a formal dinner party or a family supper) an occasion. “I’m very proud of my dinner bell,” she writes. “It’s a pretty brass one I found online ages ago. I let the kids ring it when dinner is ready or when anyone wants to make a toast”. (We love this rustic chic option if you want a bell of your own).

4. Make your friend's baby shower extra special.
This one is baby shower specific, but it’s so sweet we had to mention it. If you’re throwing a special baby bash for a friend, have all the women attending bring a piece of fabric that represents something meaningful to her. Reese did that for a girlfriend of hers recently, writing: “We told the story of what it meant, and then all the pieces were sewed into a quilt for the baby. Now her daughter has this gorgeous keepsake filled with love forever.”

5. Make merry the old-fashioneded way.
Reese grew up carolling in Nashville, and it’s a holiday tradition she brought with her to her adopted hometown of Los Angeles, where she holds an annual carol party. (Neil Patrick Harris is on the guest list!) First, she serves a simple dinner of roasted ham and biscuits, and once everyone has eaten and had a few drinks, they gather around the piano. “I have lyrics books made up for anyone who needs them,” she writes, “and then we sing and sing until we’re hoarse”. 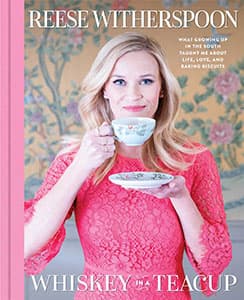 Whiskey in a Teacup: What Growing Up in the South Taught Me About Life, Love, and Baking Biscuits by Reese Witherspoon, $27, amazon.ca

Celebrated reality star, bona fide entrepreneur and entertaining expert Lauren Conrad dishes on how to throw the outdoor bash of your dreams.

5 things we learned about entertaining from Reese Witherspoon