Share
Share
Star-crossed lovers, imprisonment and untimely death... Sounds like Desperate Housewives, but it's the story of the most popular ceramic pattern of all time:Â  Blue Willow.

Blue Willow round placemat in Navy (so hot!), Dransfield & Ross 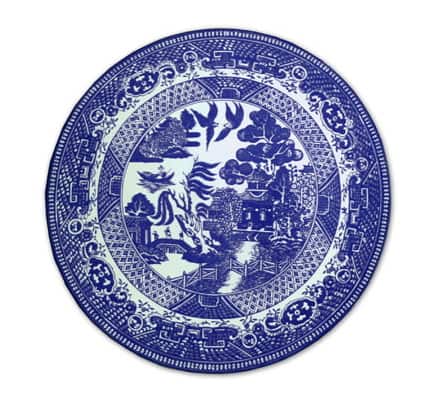 THE LEGEND Held captive in her own home, and with a miserable arranged marriage looming, the daughter of a wealthy Chinese mandarin runs away with her lower-class lover. Depending on which version of the legend you read, they are pursued and killed by either the angry father or the scorned suitor (or both), or are drowned at sea. Upon their death, the lovers are reborn as doves. The elements of this romantic tale have been depicted in vivid blue detail on millions of plates, pitchers and platters for more than 200 years. But the legend of the Blue Willow pattern is actually an English invention -- part of the fanciful western interpretation of the Far East that's the hallmark of chinoiserie.

When I splurged on eight Blue Willow dinner plates at the Christie Antiques Show a while back, I knew I wanted to display them in a slightly unusual way. Noticing that one plate had a fairly severe stress fracture, I placed it in a cloth tote, and gently tapped on the back with a rubber mallet until it cracked. The result? A clean break into three pieces. I painted a dollar-store plate the same colour as the wall and mounted the broken Blue Willow on the back using strong adhesive. Hanging it with the other plates boosted the display from trad to rad. (From the July 2009 issue of Style at Home.) Photography by Paul Chmielowiec. 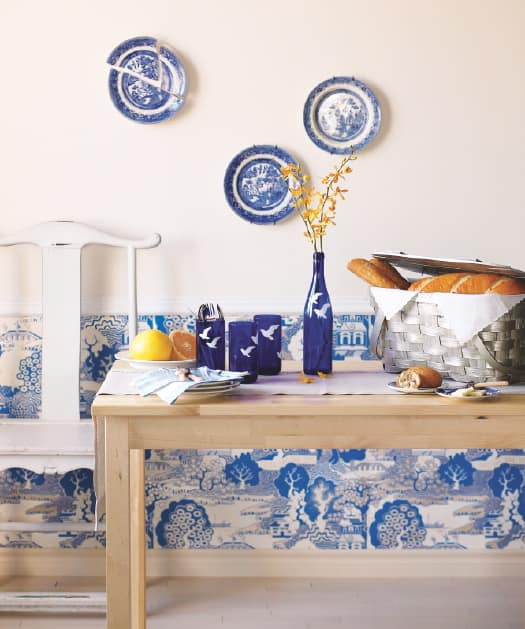 THE HISTORY Throughout the 18th century, Europe imported blue-and-white Chinese porcelain at great cost. But by the 1760s, the transfer method of decoration (instead of hand-painting) and the ability to print patterns under a layer of glaze (instead of on top) meant that European potters could produce mass quantities at a reasonable price. Blue was frequently used for decoration because cobalt, from which blue was derived, was the only substance that could withstand the heat of glazing. The Spode factory, in the heart of the English Staffordshire pottery district, is credited with launching the first Blue Willow pattern in 1790. Soon, virtually every pottery house in Staffordshire released its own version. THE LOOK What we recognize as Blue Willow is a variation of Spode's Blue Willow III, from 1810. Bordered by a scroll and geometric design, the blue-on-white depiction of the legend varies among manufacturers but always includes the eponymous willow tree, a boat, pavilion, tea house, fence, bridge and two birds. TODAY The earliest pieces of Willow available to collectors are from the late 19th century. Most sought after are obscure items, like compotes, wash sets and candlesticks. Also prized are multicolour versions, which emerged after developments in manufacturing opened the doors to pink, red, green, brown and black interpretations. Regardless of form, collectors look for the clarity of the transfer, the condition of the body and, of course, the manufacturer's mark, which helps establish period and ultimate value.

Although acclaimed designers William Diamond and Anthony Baratta have hung these Willow plates and platters in a traditional manner in keeping with the period furnishings, the pairing of the blue with an analogous green keeps the space punchy and relevant. Love that rug! 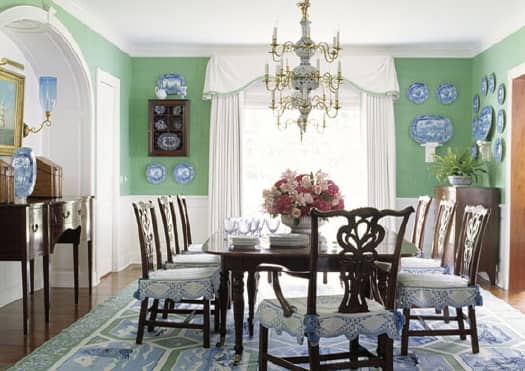