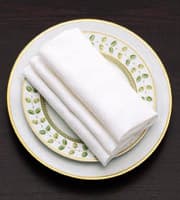 Up-the-steps fold
1 Place square napkin on table with one edge facing you.
2 Fold horizontally into thirds, like a letter, by folding bottom up then top down.
3 Fold in left and right edges about 1-1/2 inches to make "hems."
4 Fold right edge over left edge, bringing "hemmed" edges almost together but not quite aligning them, so you have a "step" on bottom. Do not crease fold.
5 Fold right edge over left almost meeting second fold to make another "step." 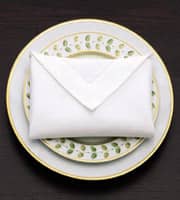 Envelope fold
1 Place square napkin on table like diamond, with one point facing you. Fold in half upward, point to point, to make triangle.
2 Fold left and right corners of triangle inward so points meet at midpoint of base.
3 Fold outer portions inward again in similar manner, with folds meeting at centre.
4 Fold bottom section of napkin up so you have rectangular bottom and triangle "flap" above it.
5 Fold "flap" down over rectangle to resemble sealed envelope. 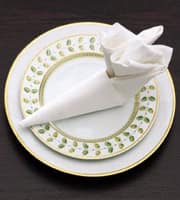 Slipper fold
1 Fold square napkin in half from top to bottom. Fold in half again from top to bottom.
2 Holding finger at top midpoint, fold down both sides toward you, so edges meet along centre.
3 Bring diagonal portion of outside edges to centre again, creating point at top. Fold left side over onto right side.
4 Turn so point is facing left, tails right; set on table, folds down.
5 Bend closest tail inward and up at 45-degree angle; bend other tail inward and up in same fashion. 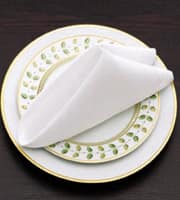 Pyramid fold
1 Place square napkin on table like diamond, with one point facing you.
2 Fold in half upward, point to point, to make triangle.
3 Fold left corner up to meet top corner.
4 Turn napkin over. Fold diagonally in half by bringing bottom point up to meet top. You now have a triangle.
5 Lift up base of triangle toward you while bringing outer points closer together underneath. 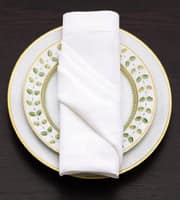 Diagonal pocket fold
1 Fold square napkin in half, then into quarters with all open corners together at top right.
2 Pick up top layer at top right and gradually roll up diagonally toward you as far as it goes. Press roll flat to form band.
3 Bring second layer down from top corner (not rolling), tucking corner behind band so that fold forms second band parallel to first.
4 Repeat with third layer.
5 Keeping bands diagonal, fold both sides under back to form neat rectangle. Tuck greenery or flowers in pockets if you wish.

Tip: Use starched napkins for best results when folding. For nice full folds, do not press napkins as you go.