Rumours of Wedgwood's demise have been greatly exaggerated. In early 2009, the U.K. branch of parent company Waterford Wedgwood hit a rough patch, but with a buyout and global consolidation effort, by the end of March things were looking up. During it all, the luxury tabletop manufacturer has been keeping calm and carrying on. After all, the Wedgwood family motto is Obstantia Discindo: "I overcome all obstacles." The financial uncertainty didn't hamper Wedgwood's 250th birthday celebrations this year. Festivities have included a retrospective exhibit, Wedgwood: Artistry and Innovation, at Toronto's Royal Ontario Museum, which was such a success that it’s been extended to the end of 2009. But the real icing on the birthday cake is the new book At Home with Wedgwood: The Art of the Table by Tricia Foley ($40, Clarkson Potter, 2009). Tricia is an American design expert with a slew of books to her credit. As a collector herself, and having spent a year consulting on product development and branding for Wedgwood in London, followed by a stint as president of Wedgwood U.S.A., Tricia is a well-qualified champion of the brand. Senior design editor Margot Austin caught up with Tricia at her New York home to talk tabletop.

style at home: What was the inspiration for this book?
tricia foley: There have been books on Wedgwood before, but nothing like this. I saw a gap between the histories, the Josiah Wedgwood biographies and the legacy behind the products people still treasure. This book is a celebration of style.

s@h: At Home with Wedgwood features table settings from the collections of some notable design personalities like Charlotte Moss, Carolyne Roehm and Thomas O'Brien. How did that treatment for the book materialize?
TF: When I began working on the book project and I mentioned it to friends and associates, a smile would light up their faces. Every time I talked to someone about it, they would have their own Wedgwood story to share. Many of the collectors featured in the book are people I met during my time as a magazine editor [Victoria, House Beautiful, Country Home]. I remembered they had collections, so I called them. Everyone was very enthusiastic about participating. People think of Wedgwood as glamorous and elaborate, but this approach makes it personal and shows readers how many different looks you can achieve with the collection.

s@h: Even Jane Austen had Wedgwood?
TF: I once did a story on Jane Austen's home, and I remembered there was Wedgwood there. It's known that Jane was invited to join her brother and niece when they visited the London Wedgwood showroom in 1813 and ordered 167 pieces, including six dozen dinner plates. I contacted the curator of Jane Austen's House Museum and, sure enough, they still have some pieces. We were able to photograph them and parts of the house.

s@h: And what about you—do you have any favourite Wedgwood pieces or patterns?
TF: I have lots of Wedgwood collections that I've been building for many years, even before I worked with and for the company. My English grandmother collected pretty cups, saucers and trios—tea sets with dessert plates. When we went over to her house, we could pick our own teacup and saucer from her collection to have tea. At home, I have an old dollhouse that my nieces used to play with, and now it's all filled with china. I buy everywhere I go, but I'm just as likely to buy IKEA as I am a rare 18th-century piece. It's an uncontrollable passion. I collect Wedgwood Drabware, Wedgwood White, black basalt, Jasper Conran White and Jasper Conran Casual, and I also have a lot of unique pieces of antique creamware, from baskets to platters. My favourite piece is an old plate from 1790 that I found in a pile of china in a junk shop. It's creamware, with a tiny pinked edge, and is as light as a feather! I also love my black basalt tea set, which is from the 1920s, and I have 12 beautiful floral-embossed creamware dessert dishes that Thomas O'Brien gave me for Christmas one year.

s@h: This book is a showcase of entertaining styles. How do you entertain?
TF: When I entertain, I like to use many different rooms. It gives a sense of occasion when you move from place to place. Use the cocktail table or any folding table and put a cloth over it to set out some appetizers. I enjoy having Sunday night suppers in my kitchen with the fireplace going. I use the boathouse for lunches, dinners and drinks parties. I've even done over my basement and put in a fireplace to make it a large entertaining space.

s@h: Does that style of entertaining influence the menu?
TF: If you keep everything simple, you can manage it. Make dishes like pastas and salads to serve buffet-style. I prepare as much as possible ahead of time so there's no fuss during the party. And I'm a fanatic about trays. You can never have enough!

House whites
Despite the fact that Wedgwood is well known for its iconic blue-and-white jasperware and intricate hand-painted patterns, it has built an empire on the white plate. Here’s a roundup of the bestsellers. 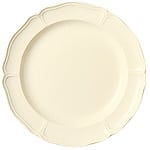 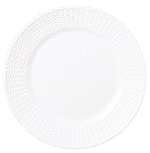 Nantucket fine bone china, 1982 DESIGNER: GEORGE DAVIS, A NANTUCKET RETAILER WHO COMMISSIONED IT FOR HIS SHOP. WEDGWOOD LIKED IT SO MUCH THEY PUT IT INTO PRODUCTION.