With so many emerging Canadian chocolatiers on the scene, the options for chocolate lovers are looking sweet indeed.

Forget what you know about Belgium, Switzerland, or France—some of the world’s best chocolate is being made right here in Canada. The past couple of years have seen a marked rise in the True North’s artisanal chocolate scene, with local chocolatiers turning out everything from bean-to-bar single-origin chocolate (the fine wine of the confectionary world) to wildly flavoured bonbons (think yuzu and bergamot) and everything in between. Some artisans even go the extra mile by designing their packaging themselves, for a fully personalized product.

Here are some of our favourite chocolatiers making sweet, delicious waves on the market right now:

With the education and training of an engineer but the heart of a pastry chef, it’s no wonder that David Chow’s chocolates are a marvel to behold. This Toronto-based chocolatier caught his break a few years back when his technicolour easter eggs took the city by storm, and he’s been crafting a wide range of whimsical, gorgeous creations ever since. Chow’s flavours are extremely creative, with bonbons flavours like smoked honey and scotch or cherry negroni, plus bars with award-winning flavours like Ontario honey sponge toffee with caramelized buckwheat, and fennel pollen.

Believe it or not, Alicja Buchowicz (the founder of her eponymous chocolate company) didn’t actually enjoy chocolate. She’d found the flavours uninspiring, so she decided to create her own, to much acclaim. Her Ottawa-situated shop sells bars in 26 wild flavours, including wasabi, puffed rice and strawberry, dried ramen, and a cereal-marshmallow mix. The packaging designs are practically works of art, designed by Buchowicz herself. But the labels were also designed to work as postcard envelopes (with room for a written message, address and stamp on the back), to send as especially delightful piece of snail mail.

French chocolatier Julien Rousseau-Dumarcet spent years travelling through Europe with his business partner (and spouse!) Nathalie Morin, learning everything they could about chocolate making along the way. They transformed this passion into a shop in Halifax, where they hand-make all the chocolate on site—their production can even be admired through a viewing window that looks into the workshop. Their bonbon flavours range from the more traditional hazelnut gianduja to local specialties, like the haksap berry pâte de fruit. They also just launched a new line of single origin bars for their customers to experience the distinct tasting notes exclusive to the terroir of different countries. 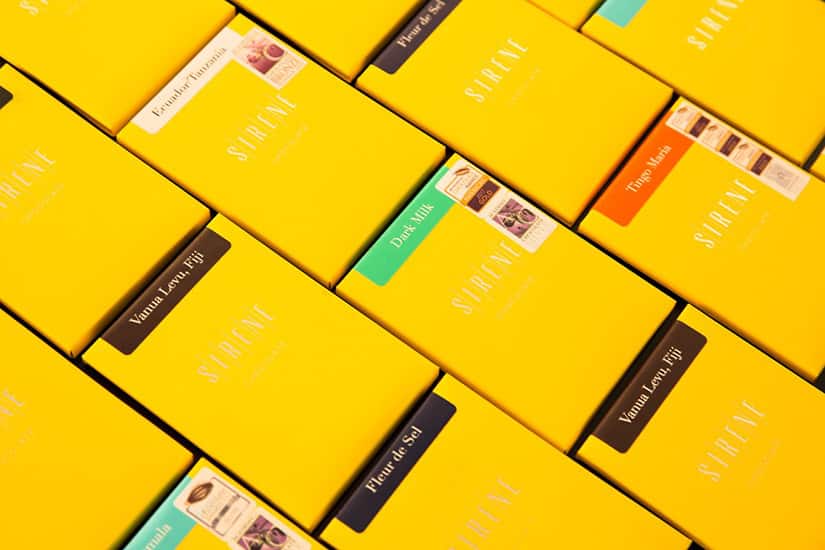 This Victoria-based company was founded by Toronto transplant Taylor Kennedy. Kennedy wanted to make his specialty chocolate with only ethically-sourced ingredients, so he personally oversees production, from the cacao bean growth to the final bars on the shelves. There are no frills in Sirene’s flavours; instead, this company sells eight single-origin bars (plus cocoa powder, for the bakers out there) to highlight the unique tasting notes of each chocolate as a result of its country of origin.

BETA5 gets its name from the chocolate tempering process that results in commercial chocolate’s distinctive shine and snap (the sought-after form of cocoa butter crystallization is called the form-5 beta crystal structure). This family-run business was started by husband and wife team Adam Chandler and Jessica Rosinski, who sell pastry as well as chocolate in their Vancouver shop. BETA5 was name one of North America’s Top Ten Chocolatiers, and with flavours like theirs, it’s easy to see why. Their Strange Thing bar, for example, has a milk and white chocolate base that gets studded with salty black licorice and raspberry licorice. BETA5 also has a collection of cocktail chocolates, with options like Negroni, Tequila Sunrise, and more.

Since 2012, Edmonton’s been made all the sweeter as a result of The Violet Chocolate Company’s emergence on the scene. Red Seal Chef and Chocolatier Rebecca Grant carved out a loyal following by using old-world chocolate crafting techniques to produce modern flavour profiles. The company makes an effort to source ethical ingredients, and the flavour notes (just about every component that isn’t the cacao) come from local ingredients wherever possible. Our mouth waters just to think about some of the combinations Grant has put together, with flavours like pomegranate and turmeric, Moroccan spice or London Fog.

A post shared by Chocolats Geneviève Grandbois (@grandboischocolats) on Jan 25, 2018 at 9:53am PST

When she was only twenty years old, Genevieve Grandbois became passionate about chocolate and began to study it at home and abroad, learning everything she could about the craft. Within a year, she opened her own chocolate business, which she ran for three years before taking a break. In 2003, though, she returned to her passion, opening her current eponymous store in Montreal so she could share her creations with the world. With bars like her Carré sesame grillé (made from a blend of 54% milk chocolate and sesame butter, and loaded with toasted sesame seeds), she could have stopped there, but she’s expanded her shop to also include homemade caramel sauces, ‘mougats’ (chocolate-coated nougats topped with salted caramel mousse), and other confectionery.

10+ homemade goodies to give this holiday season

From white chocolate bonbons to stunning bundt cakes, learn how to craft these gorgeous homemade gifts will take your holidays from special to spectacular.

Canadian chocolatiers you need to know about