Chocolate mousse and toffee sounds like a great combination to us. Author: Maya Visnyei 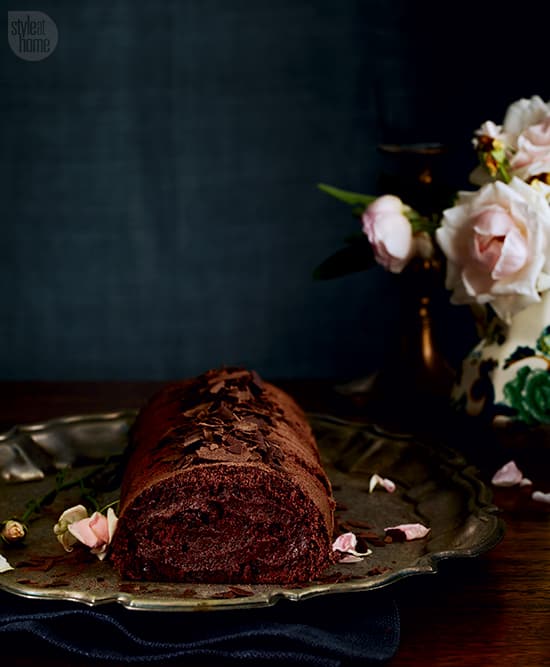 Directions
1 Preheat the oven to 375°F. Grease an 11" x 15" rimmed baking sheet and line with parchment paper. In a large bowl, beat the egg whites with an electric hand mixer until soft peaks form. Add half of the sugar, a tablespoon at a time, beating well until the egg whites are glossy and stiff peaks form; set aside. In another bowl, beat the egg yolks with the remaining sugar and the vanilla until pale and fluffy, about 4 minutes.

2 Sift together the flour and 1/4 cup of the cocoa powder, the baking powder and baking soda. Sift half the flour mixture over the yolk mixture and stir to combine. Gently fold in half of the egg whites, being careful they don’t deflate. Add the remaining flour mixture, stirring to combine, followed by the remaining egg whites, folding in just until they’re no longer streaky. Gently pour the batter onto the prepared baking sheet, smoothing the top with an offset spatula. Bake on the centre rack of the oven until the cake is just dry to the touch, 10 to 12 minutes. Be careful not to over-bake the cake, or it will crack when it’s rolled.

4 To make the mousse, sift together the icing sugar and cocoa powder in a small bowl; set aside. Whip the cream in a medium bowl with an electric hand mixer until just thickened; sprinkle the surface with the sifted icing sugar and cocoa and whip until thick. Add the melted chocolate and stir until combined.

5 Unroll the cake and remove the tea towel. Spread the mousse over the cake, leaving a 1" border. Sprinkle the mousse with the toffee bits and gently re-roll the cake. Wrap the cake in plastic wrap and place, seam side down, on a baking sheet. Refrigerate until the filling is set, 2 to 3 hours. Remove the plastic and slice the cake to serve.