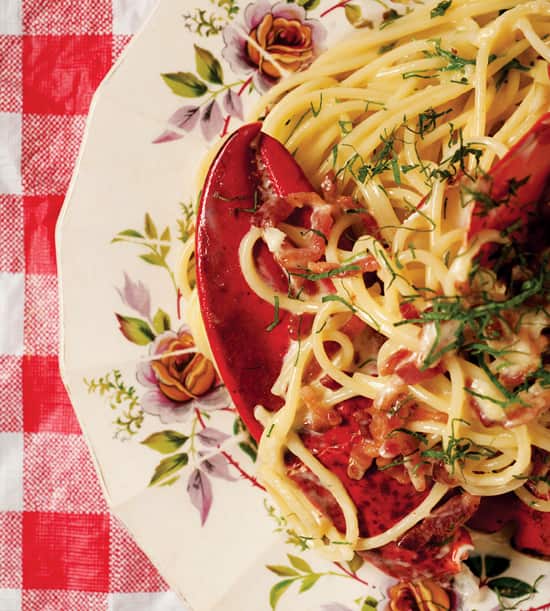 Directions
1 Start by dividing the 8 quarts water evenly between 2 pots. Add 2 tablespoons salt to each pot, and bring both pots to a rolling boil. (One is for the lobster, and the other one is for the spaghetti.) Lobsters live in the sea, and the best lobster you’ll ever eat will be when you are on a ship or near the shore and the lobster is boiled in seawater. So, before you add the lobster, salt the water. When it is as salty as the sea, slide in the live lobster. You need to cook a lobster for about 5 minutes per pound (455 g), which is about 12 minutes for this lobster.

2 Measure the spaghetti. To do that, make the size of a quarter with your thumb and index finger; 1 portion of pasta is what fits into that “hole.” Measure 2 portions and add them to the second pot of boiling water. Cook the pasta according to the instructions on the package. We don’t make our own spaghetti, so we don’t expect you to, either. Drain it, then disregard the “canons of pasta” and go ahead and rinse it under cold running water. Toss it with the olive oil so it doesn’t stick together and keep it at room temperature nearby.

3 The lobster will be cooked by now. With your trusty long tongs, take it out of the water and put it in a bowl. Let it cool down until you can touch it with your hands, then remove the claws and the knuckles. Crack the claws with a knife or with a cracker, whichever you feel most comfortable using. Take the tail off the torso and crack it in two. Everything is still in the shell, and you want to leave it like that. Put the claws, knuckles, and tail pieces in a bowl and put the bowl aside.

4 Now you will be left with the torso. Hack it into 4 or 5 rough chunks with a cleaver. If that’s too dramatic, use a large knife. Keep them separate from the other pieces.

5 Next comes the sauce: In a large stockpot, combine the torso pieces, cream, butter, brandy, tarragon, garlic, and the remaining 2 cups water. Place over medium heat until the mixture starts to bubble. Reduce the heat to very low and simmer gently for 30 minutes, making sure it doesn’t reduce too much. You need about 1 cup (250 ml) liquid left.

6 Filter out all the parts, toss them away, and keep just the cream. You don’t want the cream runny; instead, it should nicely coat the back of a spoon. Season with salt and pepper.

7 In a large, shallow pan, warm together the lobster cream and the lobster pieces over medium heat. Add the spaghetti and bacon and twirl all the ingredients around with a wooden spoon for 3 to 4 minutes to heat through. Garnish with the parsley and serve family style (turn on the TV and start arguing).