Skirt steak cooks up very nicely in the barbecue pit for these tasty fajitas. Just be sure to sharpen your knife and slice the meat thinly and always against the grain. The fajita rub and the oak smoke flavour work well together on the meat, and cooking the vegetables in the smoker puts this one over the top. This is a great way to get started with your smoker and it’s a can’t-miss meal. 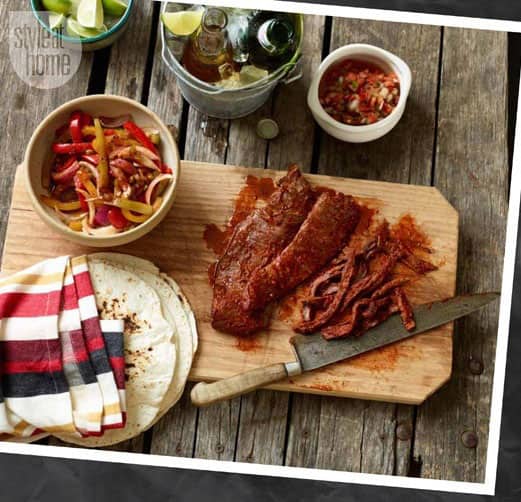 1 Cut the steak into six pieces. With a heavy meat mallet, pound the steak well to tenderize it. Squeeze the juice of one lime over one side of the meat. Season with the fajita rub. (If you season it heavily, the meat will be very rich and spicy. If you like it a little milder, then season lightly.) Let rest for 5 minutes. Flip the steaks and squeeze the juice of the second lime over them. Season with the fajita rub. Place the steaks on a plate, cover with plastic wrap, and refrigerate for up to 2 hours.

2 Prepare your cooker to cook indirectly at 235°F using medium oak wood for smoke flavour. In a medium aluminum foil pan, combine the onion, bell peppers, and jalapeno. Drizzle with the olive oil. Season with the salt and 1 tablespoon of the fajita rub. Toss to mix well. Put the pan in the cooker and cook for 1 hour.

1 Combine all the ingredients in a medium bowl and mix well.

Note: The rub may be stored in an airtight container in a cool place for up to 6 months.

BUY THIS BOOK
Excerpted from Slow Fire by Ray Lampe Copyright © 2012 by Ray Lampe. Photography by Leigh Beisch. Excerpted by permission of Chronicle Books. All rights reserved. No part of this excerpt may be reproduced or reprinted without permission in writing from the publisher.