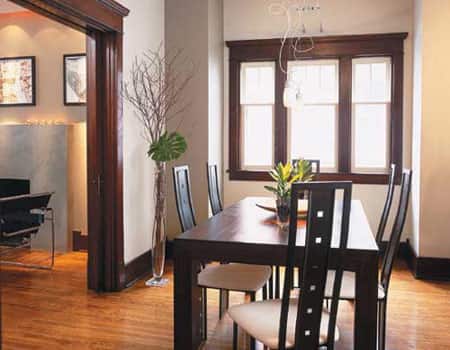 The house, located in Peterborough, Ont., had been abandoned for two years. Its coal-burning furnace was condemned by the city, there was major smoke damage, and six tons of garbage needed to be removed from inside. And to make matters worse, there was no working bathroom and no kitchen. But somehow Bill Lett, an architect, saw its potential. "The house was a really good example of Arts and Crafts style," he says. "The layout was fantastic, and the wood detailing, like the hardwood floors and the Douglas fir trim, was quite a find. Even though my wife, Kristy, was completely freaked out by the idea, we still bought the house."

Within three days, Bill drew up reno plans and started meeting with tradespeople. What attracted him most to the project was the possibility of juxtaposing the home's Arts and Crafts interior and exterior elements with a modern interior design. "The idea was to keep it fairly neutral," he says.

The budget for the renovation was $30,000, which was all the bank would loan the couple, who were first-time buyers. That meant Bill would have to do a lot of the work himself. It also meant that he and Kristy would have to find imaginative ways to stretch their dollars, especially in hard-working rooms like the kitchen and bathroom. 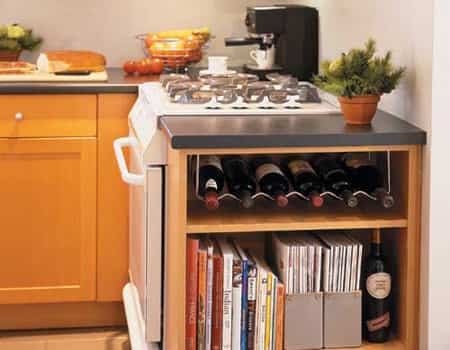 "To save money, we bought stock kitchen cabinets at IKEA, which we put together our way," says Bill. "It was a huge savings – it cost us only $2,500 for the cabinetry and countertops!" Bill made additional shelving out of MDF that he stained to match the Douglas fir trim in the rest of the house.

Bill and Kristy took the same creative cost-saving approach in the bathroom. The vanity, which had slightly crooked doors, was purchased from a kitchen cabinetry manufacturer for $60; the countertop, made of affordable plastic laminate, was chosen to mimic the luxurious look of granite.

To cut costs and maintain the original integrity of the house, the couple refinished the mouldings themselves – no small feat. "It took us eight months to remove, label, clean, refinish and reinstall all the Douglas fir trim throughout," says Bill. 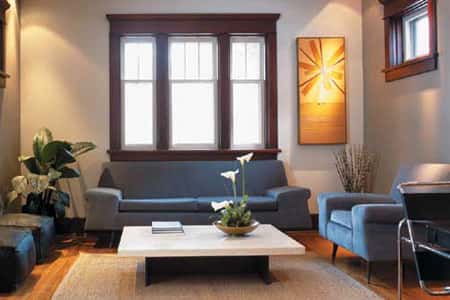 However, the most inventive part of Bill and Kristy's renovation journey was scouring secondhand stores for furniture. The challenge? Seeing things for what they can be, not what they are, such as the space-age sofa and chair, which they bought for $70 and re-covered with discontinued grey auto upholstery fabric that they got at a discount.

Bill also discovered new ways to use other materials. For instance, the old cinder block clay fireplace in the living room was built out and parged with concrete. Parging is a sealing technique usually used on foundation walls, but it worked here and cost only $250 for the whole job.

Today, Bill and Kristy are happy they were able to complete the renovation and stay within their tight budget. "All it takes is a little imagination and keeping a basic design plan and budget in mind," says Bill.