Hollywood superstar Jennifer Lawrence has a swanky new address in Beverly Hills. The actor who stars in The Hunger Games films and American Hustle purchased a 5,500-square-foot abode nestled in the twisty streets of the Hollywood Hills. In fact, this Hamptons-style home has been owned by other Hollywood household names in the past, including Jessica Simpson, and before that, Ellen Degeneres among other stars.

When Lawrence recently purchased this home in fall 2014, the Internet was abuzz with suggestions that her then-boyfriend, the musician and Coldplay frontman Chris Martin (the couple has since reportedly broken up) was influential in her choice of a cozy, romantic house. The interior, reportedly designed by Rachel Ashwell, the designer famous for creating shabby-chic, is rumoured to have an ample kitchen and a beachy low-key vibe intended for the new couple to cocoon with home-cooked dinners and good wine. But we’d like to think Lawrence, who is revered for her down-to-earth attitude, simply chose it because the house, while sprawling, still has a comfortable and lived-in vibe – by ostentatious Los Angeles standards anyway.

This five-bedroom house cost Lawrence over $8 million, and for that hefty chunk of change, she is now the mistress of a swimming pool, a koi pond, extensively lush landscaped gardens, the requisite media/screening room, and a gourmet kitchen suitable for big family get-togethers and entertaining a crowd among other luxe features. It’s a romantic home, a sentiment echoed even by the real estate listing agent, Sotheby’s. “Ebonised hardwood floors and fabulous crown and base mouldings throughout are just some of the quality details in this romantically emotional home,” was the reported wording of the agency’s listing. Here’s a look at this fabulous house. 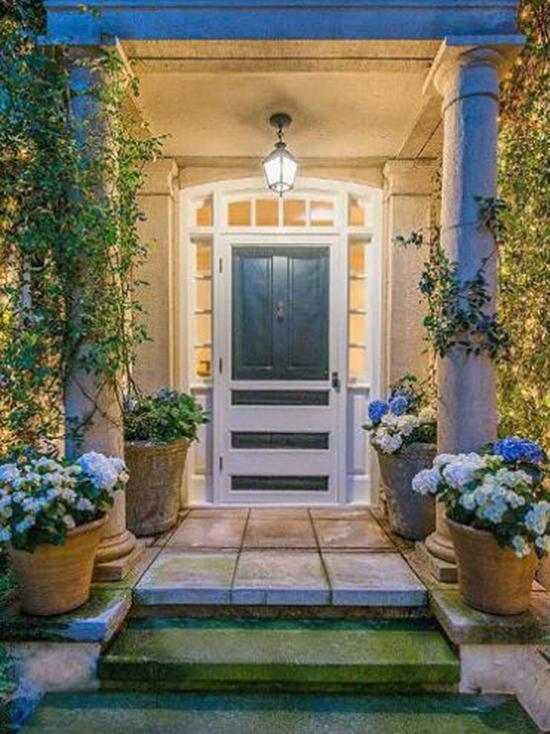 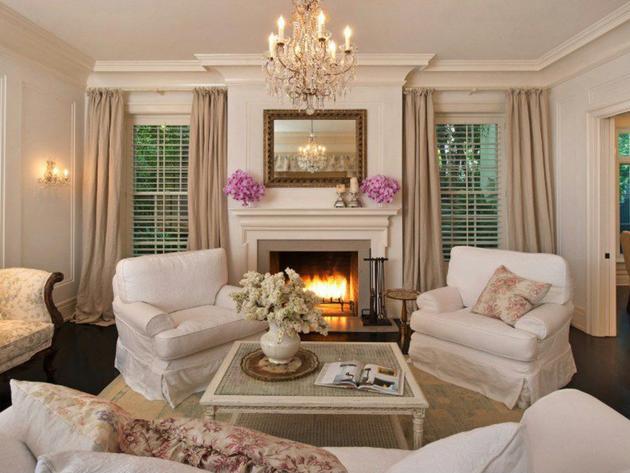 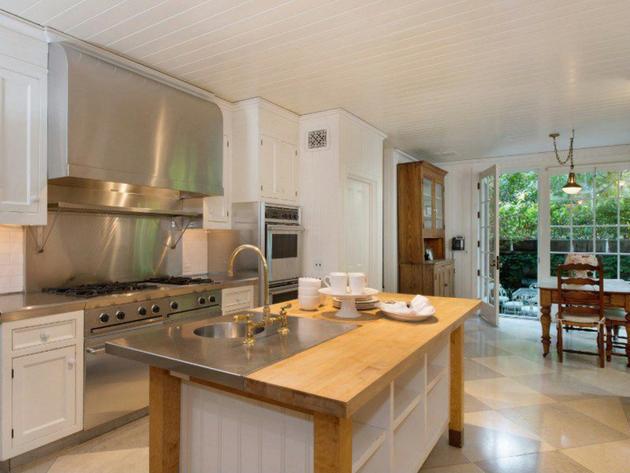 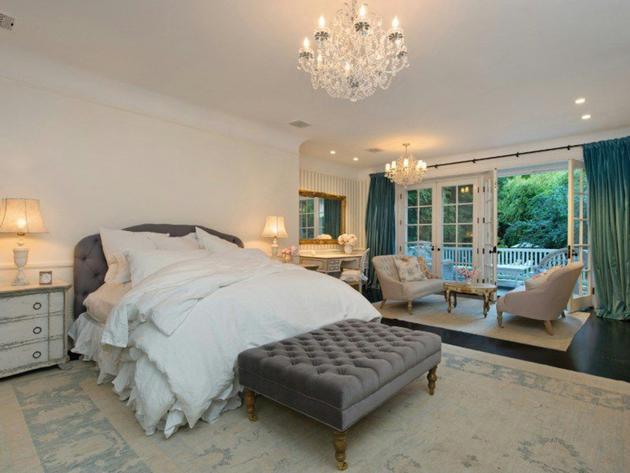 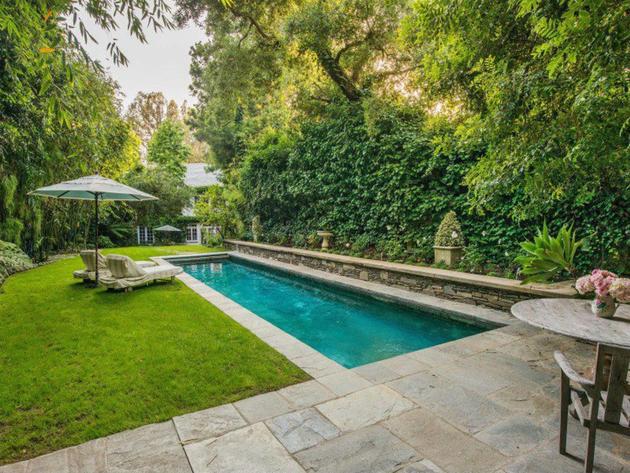 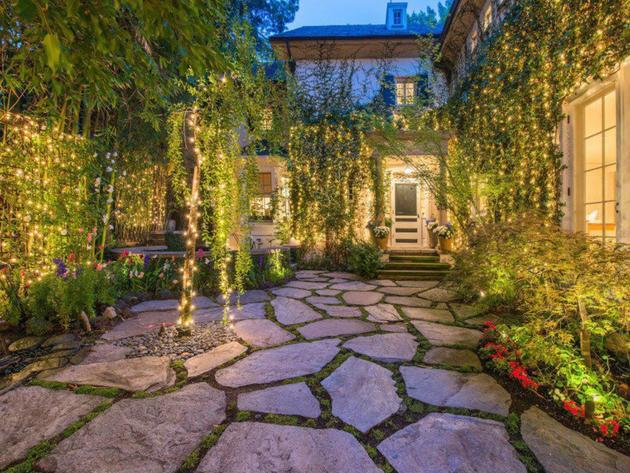 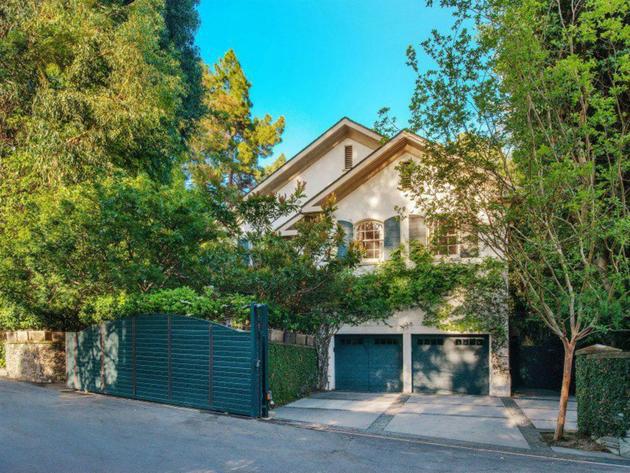 A little bit French, a little bit rustic, this entrance isn’t meant to scream grandeur. It’s meant to warmly welcome. Transom windows above and flanking the door, and the addition of a screen door give the entrance to this Beverly Hills home an unpretentious vibe, as do the giant pots overflowing with blooms. A single, traditional lantern illuminates the elegant outdoor space, similar to the Cambridge Pendant from Restoration Hardware.

The ultra-casual, overstuffed sofas with slipcovers accessorized with floral-print throws are hallmarks of decorator and designer Rachel Ashwell’s famous shabby chic style. (Ashwell is reported to have been the decorator of this home.) Neutral drapes that pool elegantly on the floor and a crystal-laden chandelier in a burnished gold finish add polish to the look, as do crown moulding and panelling, and a wall sconce. Meanwhile, a roaring fireplace amps up the coziness factor. For slipcovered shabby chic style armchairs, design-lovers need look no further than IKEA’s slipcovered Ektorp armchair in Blekinge White. Also, Home Depot carries a chandelier with similar traditionally elegant look called the Hampton Bay Tulip Cut Chandelier.

An antique oval dining table, simple wallpaper and slipcovered dining chairs mix formality and comfort graciously in Lawrence’s new Hollywood house. Linen drapes that pool on the floor are a feature that is carried through from the adjacent living room. A sheer ready-made take on these drapes is available at Bouclair, available in panels called the Sandridge curtain, and they come in a variety of lengths. For a soft, damask-print wallpaper, try Farrow & Ball’s Renaissance BP 2804.

You can’t go wrong with a white kitchen and this gourmet space proves the point. A huge centre butcher block island anchors the space, while the grey-and-white checkered marble floors are a lighter spin on the traditional black-and-white. The focal point, however, is the huge, restaurant-style stainless-steel cooking hood, backsplash and double gas range. If you love this island, IKEA’s freestanding kitchen cabinetry from the Varde series might make an appealing and affordable facsimile, from the butcher block surface down to the stainless-steel kickplates. Similarly deluxe cooking ranges are available through high-end manufacturers Wolf and Jenn-Air.

This huge master bedroom is completely fitting for a Hollywood star of the highest order. It’s the most luxurious and sweepingly elegant of the rooms in the home that were pictured on the real estate listing, and it is truly a luscious hideaway. A beautifully worn silk rug adorns the floor, and the oversized tufted bench at the foot of the bed echoes the tufted headboard. Chandeliers wash the room in a romantic light while the vanity, positioned near the walkout balcony, provides flattering daylight for flawless makeup application. Sexily crumpled, layered bedding is the ode to shabby chic in this space. Check out West Elm for tufted headboards, such as the Tufted Hang-Up or Pottery Barn’s Lorraine. If it’s the white-on-white bedding you covet, try West Elm’s Crinkle duvet cover and shams.

A crystalline lap pool is surrounded by lush foliage, creating privacy and an almost English garden atmosphere. Carrying the indoors out, the lounge chairs are slipcovered in striped fabric, evoking the stripes of the dining room chairs. There is also a koi pond on the grounds of Lawrence’s new abode situated among the extensive, beautifully manicured gardens. If you love stripes for outdoor chaises, Pottery Barn has a wide selection including this fetching Newport Stripe.

Perhaps the most magical spot in the home is this flagstone patio surrounded by twinkling lights. It’s easy to imagine languid post-dinner conversations taking place out here. Mini-lights are intertwined with vines and wrap around slender tree trunks. Tiny plants, perhaps succulents, have been strategically planted between the stepping-stones. To create a private feel in an outdoor space using plants, visit Canadian Gardening and read Small Space Solutions for Privacy Seekers. For garden mini lights, Canadian Tire has a product called Mini-Light Clear Garden Lights that can be used year round to get this effect.

This house with a two-car garage might not be imposing on the outside considering its $8 million price tag, but it features the security that a paparazzi-hunted movie star needs to hide from prying eyes. It’s been described as an East Coast or Hamptons-style home, because of the traditional elements such as window shutters and pitched roofs. Exterior colours are always tricky to guess from a photo, but Lawrence’s garage doors, shutters and gates may be a green-based dark hue such as Studio Green by Farrow & Ball.