Sitting down to watch a movie with friends or by yourself has been a favourite Canadian pastime for decades. With movie sets acting as a secondary character in most films, we’ve acquired a few faves over the years! 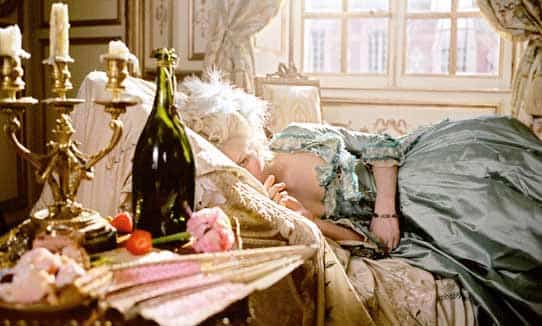 The look: Swathed in luxe silks and satins, the set of Marie Antoinette is nothing short of extravagant. Filmed on site at Versailles, the movie’s set and costumes are over-the-top elaborate, with gold, crystal, and jewels abound. French chic furniture adorns the space, with pastel desserts inspiring colour palettes.

Bring it home: Try papering your walls in a dramatic damask of champagnes and golds. 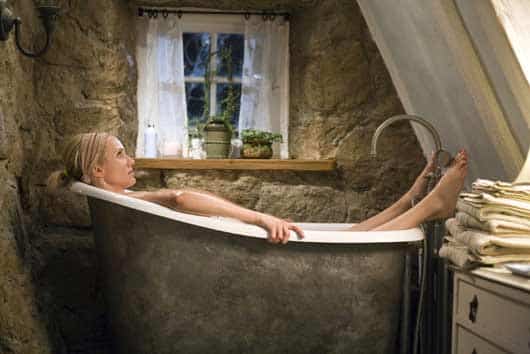 The movie: The Holiday

The look: Although Amanda’s swanky L.A. pad is stunning enough, it’s the cosy English cottage that belongs to Iris that catches our eye in The Holiday. With stone walls and a warm atmosphere amidst the cold winter weather outside, the little cottage makes us want to curl up next to the fireplace with a good book and a cup of tea.

Bring it home: Cosy up your space with a deep soaker tub in the bathroom for warm baths, and wooly throws in the living room for curling up on the sofa.

The movie: Sex and the City

The look: From the days of the TV show to the moment we watched the movie, Carrie’s apartment in Sex and the City has always been appealing. She’s got a great mixture of the old and the new – a rotary phone by her bed matched against a catalogue of modern fashion mags and her signature Macbook. Although not as large as Charlotte’s or as modern as Samantha’s, Carrie’s pad has always seemed like the one we’d want to live in as a writer in the Big Apple: personal, filled with fashion, and just big enough for a single gal in the city.

Bring it home: Don't throw away those mags -- invest in a large-scale shelving system that allows you to showcase all of your reads. You never know when you'll need them for inspiration! 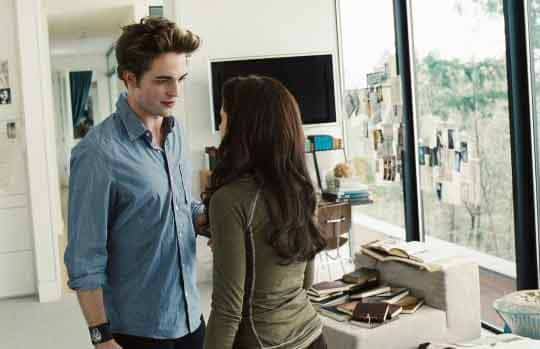 The look: Set against the vast landscape of Vancouver, Edward Cullen’s home in the vampire flick, Twilight, is a stunning example of West Coast architecture. From the open concept space to the floor-to-ceiling windows, the gorgeous home allows viewers to forget about the blood-sucking for a minute or two.

Bring it home: Get the open concept feel by opting out of draperies for large scale windows. 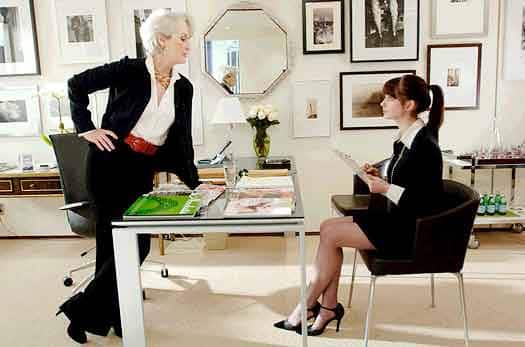 The movie: The Devil Wears Prada

The look: You know a movie is well-thought out when the character’s personality matches the space around them. Miranda Priestley’s office in The Devil Wears Prada depicts everything her character is about: cool, crisp, and perfectly tailored. A sleek black and white colour scheme paired with a feature wall of photography makes for a super modern magazine maven’s headquarters.

Bring it home: Print out some black and white photos (fashion shots, personal pics, etc.) and hang them in clusters of various sizes of frames on your wall. 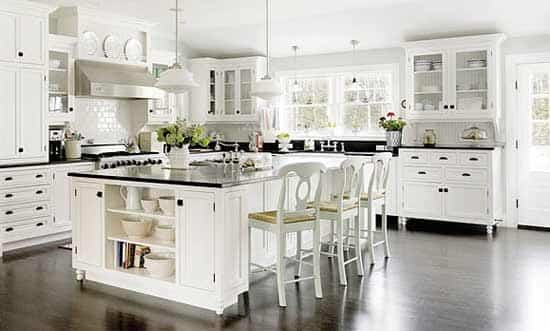 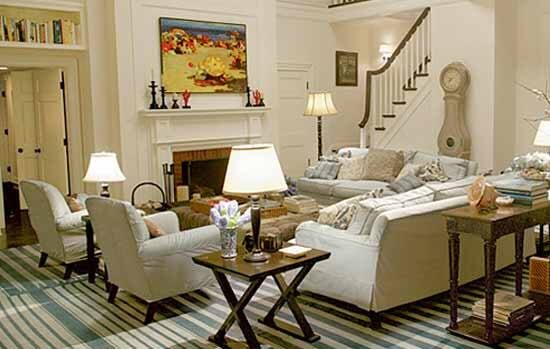 The movie: Something's Gotta Give

The look: Never has a movie’s interior been more of a crowd favourite than Something's Gotta Give. Erica Barry’s summer house in the Hampton’s is every bit the Martha Stewart advertisement, from its crisp white kitchen to the relaxed beach-style living room. If you looked up ‘relaxed summer living’ in the dictionary, you’d be sure to see a picture of this film set.

Bring it home: In the kitchen, use open-faced shelving to display classic white china. In the living space, maintain a neutral palette in your furnitue and wall paint, but choose a large scale piece of art with colours that pop. 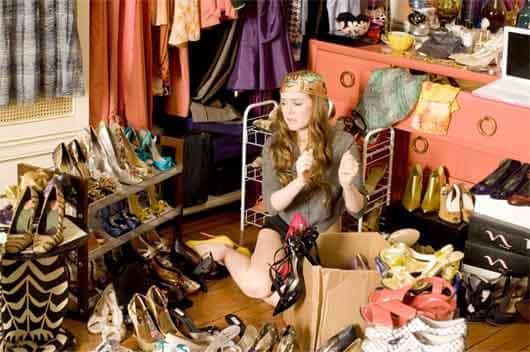 The movie: Confessions of a Shopaholic

The look: Okay, so maybe it’s not a dream space, but we love it for its realism – how many of us have clothes flying from every corner of our closets? Perhaps we’re not as extreme as Rebecca in Confessions of a Shopaholic, but this colourful chaos of designer goods makes us ache for a closet like hers. Plus, who can resist that knockout salmon colour dresser in the background?

Bring it home: Punch up an old dresser by painting it a hot hue and adding some stylish hardware. 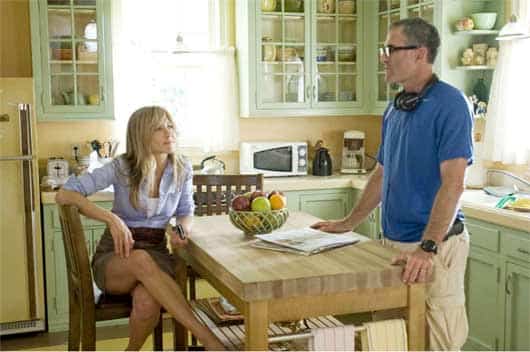 The movie: Marley & Me

The look: Although the Pennsylvania home in Marley & Me was a showstopper, we can’t help but love the Grogan family’s warm Florida kitchen. With pale green cabinetry and light streaming through the windows, the growing family’s kitchen becomes the hub of the home. It can’t hurt that it serves as a backdrop for Jennifer Aniston, either!

Bring it home: Go earthy with your kitchen cabinetry by painting the cupboards a pale green. 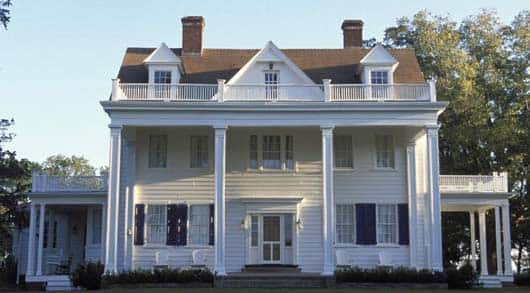 The movie: The Notebook

The look: It had a love story unlike any other, but the other memorable aspect of The Notebook is the grand South Carolina home that Noah built in hopes of bringing Ally back to him. Similar to plantation-style houses, the large white, blue-shuttered structure faced the waterfront and featured a wrap-around porch. It’s not surprising that his plan of winning Ally back worked out in the end!

Bring it home: Give your home some serious curb appeal with an eye-catching shade like this blue on your shutters and front door. 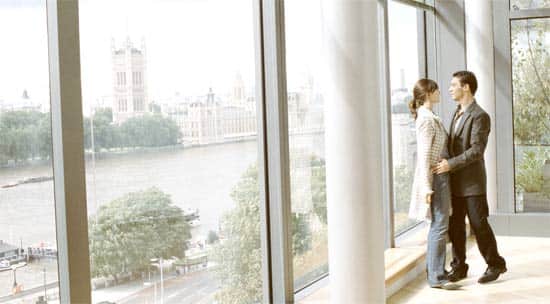 The look: Woody Allen is an oddball, but we have to give him props for the gorgeous sets of his movie Match Point. Set in England, every space featured in the film oozes rich and fabulous, and this space is no different. With floor-to-ceiling windows and overlooking the Thames, this apartment is only available in dreams – and even then, you’d better have a thick wallet! 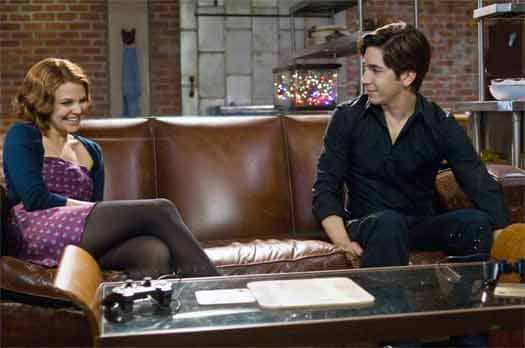 The movie: He's Just Not That Into You

The look: Although the leather couch may just look like another male bachelor pad stereotype, we’ve fallen in love with Alex’s masculine space in He’s Just Not That Into You. With its exposed brick and urban minimalist shelving, this apartment perfectly suits the truthful lad living as a single guy in downtown Baltimore – he’s got nothing to hide.

Bring it home: Get an industrial chic look with stainless steel appliances and shelving and exposed surfaces, like brick walls. 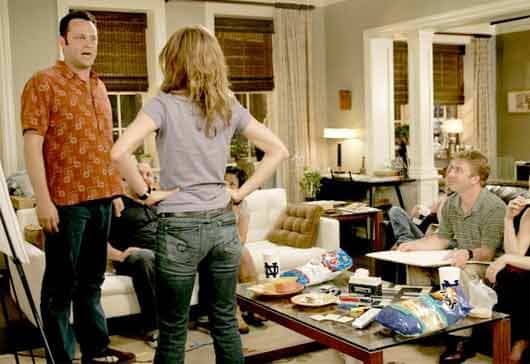 The movie: The Break-Up

The look: Yes, it’s hard to get past the onslaught of arguing and hilarious revenge in The Break-Up, but once you do, you’re faced with a lovely downtown Chicago apartment. Spacious and architecturally reminiscent of New York’s Upper East Side spaces, Brooke and Gary’s has a much more lived-in feel when it comes to the decor. Styled with furnishings to suit both their tastes, it’s no wonder neither one wanted to give up the apartment.

Bring it home: Satisfy both sexes with a rich coloured leather sofa for him and a cream-coloured linen one for her.