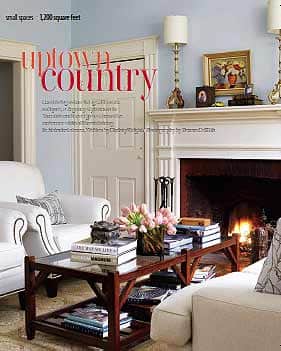 It's no surprise that location was the driving force behind Toronto realtor Michael Stewart's move from a downtown cottage in a bustling area to a historical home in the city's north end. Michael and his partner, freelance stylist Christopher Clancy, wanted a calmer neighbourhood, and when they saw the house they now call home, they were sold. "It was love at first sight, and the street was so quiet, we had to have it," says Michael. Fate agreed: two days after viewing the house, a neighbour knocked on their door, asking if they'd like to sell their cottage. That was four years ago.

Since then, the couple have put their decorative stamp on the 1835 Regency-style house by rejuvenating the rooms with paint and showcasing their antiques against the charming backdrop of the home's original period features. There were renovations as well: the kitchen was redesigned to maximize space, and a stone terrace was added just outside the dining room. For now, though, there are no further decorating plans, and Michael is just fine with that, knowing he has a perfect country home in the city.

Check out the 3-D version of this home's floorplan!

Check out the 3-D version of this home's floorplans!