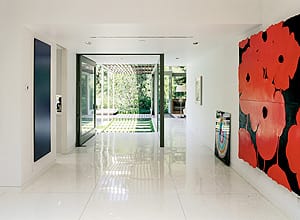 Ross Clementi Hale Studios chose a clean, modern aesthetic to reflect both the existing house and the sophistictaed lifetsyle of Star. The architects wanted to open up spaces as much as possible, creating constant connections with the outdoors. Large glass walls, doors, and windows (some of them pivoting) contribute to dematerializing the boundaries between inside and out.


Stylish. Modern. Fabulous. These words describe Sex and the City's Carrie Bradshaw and could just as easily fit the house that the show's creator and executive producer, Darren Star, lives in. But like Carrie, there is much more to this chic ultramodern house than meets the eye. "To execute something that looks deceptively simple is sometimes really hard and is very interesting to me," says Star. Much as he has done with the popular series he has created over the past decade (Beverly Hills 90210, Melrose Place, and the aforementioned Sex and the City), Star has created a living space that is hard to forget once you experience it. With the help of architect Mark Rios of Rios Clementi Hale Studios, Star set about turning the house, designed in the 1950s by Hal Levitt, into an interesting multidimensional environment that hooks you the minute you walk up to it. The front entry of smooth concrete and frosted glass accented by concrete pavers and ironwood planks offers an entrance as sexy and theatrical as any of his shows.

Since growing up in a very modern house, Star has always been drawn to contemporary architecture. He loves the work of the legendary modernist master Brazilian architect Oscar Niemeyer. Known for the dynamic sensual curves and "pavilion" feeling of his spaces, Niemeyer worked with Le Corbusier and Wallace Harrison on the United Nations headquarters in New York. Star wanted to incorporate both of these aspects of Niemeyer's work into his home. He is also a Richard Neutra fan, and lived in a house designed by the late famed L.A. modern architect Charles Kanner in Malibu prior to this residence. "Los Angeles is a city that is home to a lot of great modern architecture, but I wanted to do it in a comfortable way. Doing this house was a way to kind of explore that." 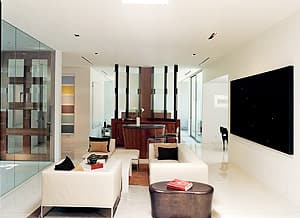 In the modern den two Calder crème leather and chrome sofas by Minotti are paired with a custom-designed white lacquered oak coffee table. The curvy little peanut-shaped side table was made by Robert Kuo Designs, in hand-hammered bronze. Greeting visitors as they enter the home is Paint Chip Painting by Peter Wegner (visible near the door at left). Bigg Dipper by Ed Ruscha hangs on the wall at the right.


To achieve this thoroughly modern -- and very L.A. -- aesthetic, Star and architect Mark Rios worked closely to open up the house by not only adding eight hundred square feet but also creating deliberate "constant connections with the outdoors." They had the landscaping completely redone to create a "wet outdoor living room," with a fourteen-by-thirty-five-foot swimming in the center. A submerged bench runs the spacious length of the pool, creating a unique space for Star and friends to enjoy a cosmopolitan or two. The back corner of the pool features a raised spa with two waterfalls, one spilling smoothly back into the pool and the other flowing into a sunken rock garden. On one side of the pool a long, rectangular ironwood deck holds sleek lounge chairs and planters of colorful native flora. Supported by thirteen caissons driven into the bedrock hillside, the deck extends the small yard by twelve feet. Star had the hedges torn down to extend the views from all sides. A bed of resilient, newly planted dichondra grass forms an ultra cool "outside" carpet between the house and the swimming pool.

With its large glass walls, doors, and windows, the house offers the feeling of being inside and outside at the same time. "There are a lot of examples of these types of houses around the country; Philip Johnson's Glass House is probably the most well known, but [indoor/outdoor living] particularly works well in Los Angeles because of the weather. You are really able to have the experience all year round." Natural material elements that are used both indoors and outdoors also blur the boundaries and add to the sense of flow. Star has spent quite a bit of time in Indonesia and loves the fresh and modern feeling of the indigenous homes, especially in Bali. "They all have a lot of natural woods," he notes, and he wanted to incorporate a little bit of that feeling into the house. Star also had bamboo planted around the property's perimeter not only to maintain privacy but also to give the house a bit of that Eastern flavor. The all-ironwood decks extend into the addition in one place bringing the natural materials-elements directly inside.

Excerpted from Hip Hollywood Homes by Sue Hostetler Copyright © 2006 by Sue Hostetler. Excerpted by permission of the Crown Publishing Group, a division of Random House of Canada Limited. All rights reserved. No part of this excerpt may be reproduced or reprinted without permission in writing from the publisher. 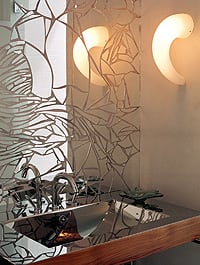 The guest bathroom, with its distinctive custom-designed mosaic mirror, reflects interior designer Milo Baglioni's attention to detail throughout the home. He found the Thor light fixtures at DIVA in Los Angeles and paired them with a Philippe Starck faucte and stainless-steel and wood sink.


Star has been an avid modern art collector for a number of years, but with no great places in his former homes to hang the art. When thinking about the renovation of this new house, deciding where the art -- including a number of works he owns by Ed Ruscha -- should go in the space was the most fun for him. Star worked with interior designer Milo Baglioni to incorporate the art into the decor. "The house is very much about the art," he asserts. It was important that the balance of shapes and colors or the feeling or mood of the art could be seen or experienced from the best vantage point possible but also that the decor provided a clean, uncluttered, and comfortable environment in which to view it. Baglioni used contemporary furnishings in soft upholstery and neutral colors to create the desired effect.

Star looks for the same qualities in interior design that he looks for in his art: specific and designed -- but not overtly so -- stylish, comfortable, and clean. Not very interested in narrative art, Star has much more of a minimalist sensibility: "I can appreciate a white painting." One of the reasons he is such a fan of Ruscha's is because at first glance, "the work seems very simple but as you look closely at the detail of brushstrokes and the variations of color, you see things that are not as simple as you thought." The physical interior of the house has very clean lines with no visible moldings. A lack of ornate decoration leaves the walls exposed in a way that allows one to notice the imperfections. "It is in the complication where you can hide imperfections. It's so much harder to make something simple than it is to make something complicated," says Star. 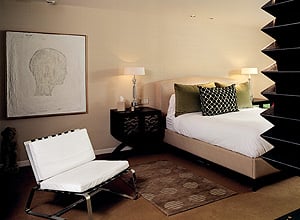 Only the creator of Beverly Hills 90210, Melrose Place, and Sex and the City could get away with an opulent faux ostrich leather and mahogany custom-made bed. The bed is framed by a pair of panneauz de verre mahogany side tables, emebellished with hand-painted glass panels and bronze bamboo motif. A retro Delaunay cord-colored leather and chrome chair is by Minotti, behind which hangs a piece by renowned Cuban artist Enrique Celaya.


Though the house predictably has immense style, it has a lot of warmth in keeping with Star's wish that the house "feel like a home and not like a magazine layout." He thinks of it as a very comfortable, happy house. This "smart house" has great electronics built in and is exceptionally wired for music and television. Star installed a hidden projector in the living room; it was "the first thing I did in the house and it is my very favorite toy," he says. He loves watching movies there and lying on the couch in the glass walled addition, feeling surrounded by nature.

Like the rest of the residence, the new pool room addition is almost seamlessly connected to the landscape. The ironwood from the outdoor deck reaches into the room, where it meets flush with the white terrazzo floor. Floor-to-ceiling steel and glass doors slide on tracks that extend beyond the house so the room can be opened to the outdoors. Star thought the space originally intended to be his workspace was too spectacular to use as "my big messy office" He admits that his office at home (he also has one on the Sony lot) has a much different feeling than the rest of the house. It may be one of the very few places that the clean and clutter-free aspect of his modern aesthetic goes astray. The space is darker than the rest of the house and scripts pile up on his desk. Above all of the clutter and organized chaos, however, hangs a painting of a simple question mark by Ed Ruscha, perhaps reminding Star that the disorder comes and goes, no matter how much you try to keep it at bay. Wherever there's an intentionally ordered, clean surface -- minimalist at its finest -- something big and creative is lurking nearby.

Excerpted from Hip Hollywood Homes by Sue Hostetler Copyright © 2006 by Sue Hostetler. Excerpted by permission of the Crown Publishing Group, a division of Random House of Canada Limited. All rights reserved. No part of this excerpt may be reproduced or reprinted without permission in writing from the publisher.