Share
Share
Elegant – that’s the word Sloan Mauran comes back to again and again when talking about her approach to design. And looking at her transformation of this 3,000-square-foot Toronto home, it’s hard to think of a better descriptor. Sunbeams pour into the living room through arched windows, making the ivory silk curtains glow and highlighting the soaring ceilings and custom millwork. Every sightline is considered – a glimpse of marble here, a gracious antique there – and each vignette is layered with Sloan’s tailored glam style. And to think it might never have happened.

The designer toured the home on a self-admitted whim, looking for a place her family could call home during the extensive two-year renovation of their forever house. When she saw an open house sign on a street near her 11-year-old daughter Sophia’s school, Sloan couldn’t resist a peek. Though the charming brick facade gave way to the dreaded three Ds – “dowdy, dark and dated,” she says with a laugh – Sloan could see the home was a diamond in the rough, with solid architectural bones and the potential for great light thanks to its corner lot. “I walked in and knew exactly what to do and what this house could be,” she says. “By opening up the space and using a lot of white paint, I knew it would be fantastic.” 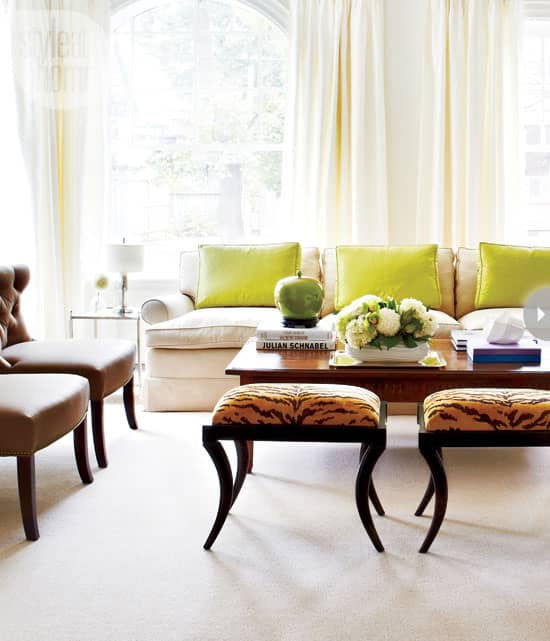 Get more inspiration for your space with these 10 living rooms we love. 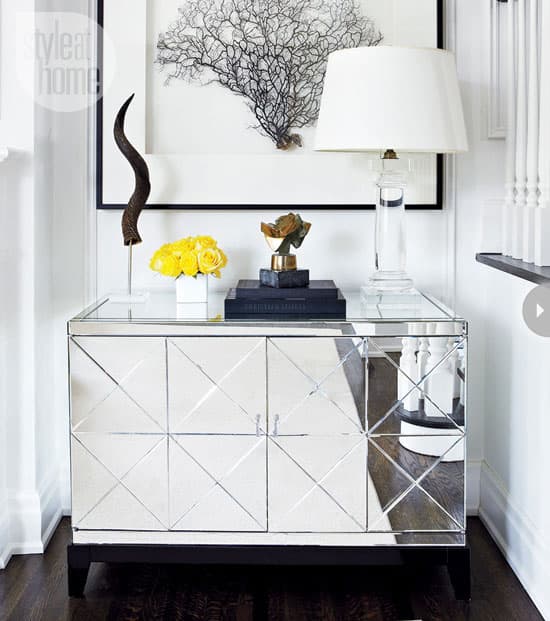 Artful vignettes
When creating artful vignettes, Sloan considers the way the eye travels in a circular motion, taking in the scale and texture of each element. She achieves perfect asymmetry with a sculptural horn that echoes the approximate height of the table lamp. The mirrored cabinet’s dark legs make it appear to float over the dark floors. 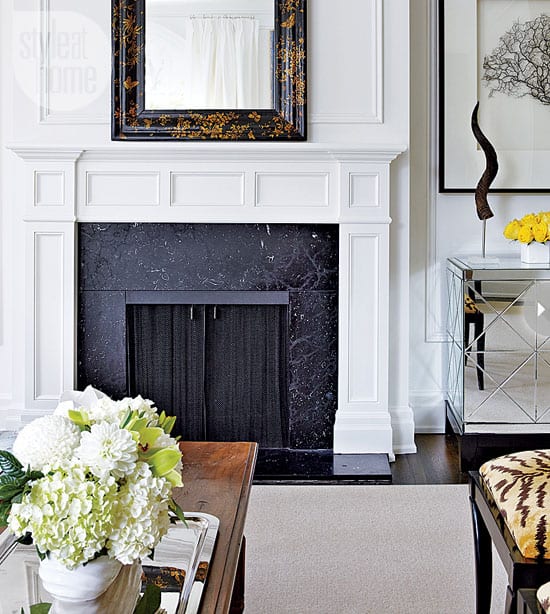 New fireplace
Sloan had the fireplace rebuilt and clad in dramatic honed Nero Assoluto marble. The mantel’s simple yet classic millwork allows the mirror’s black and gold chinoiserie frame to act as a decorative focal point. 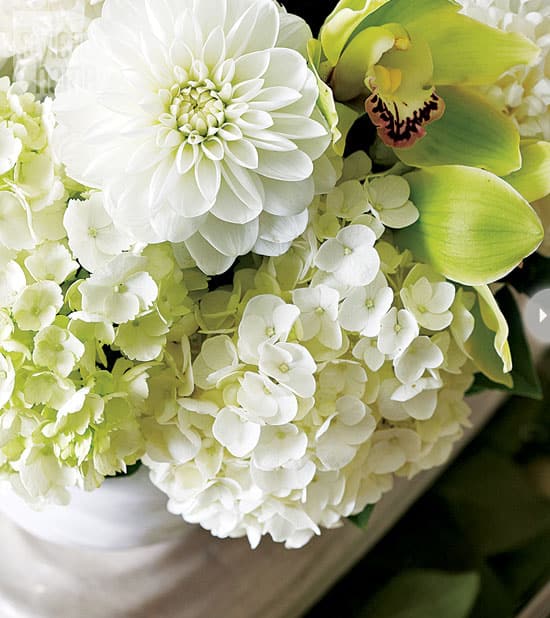 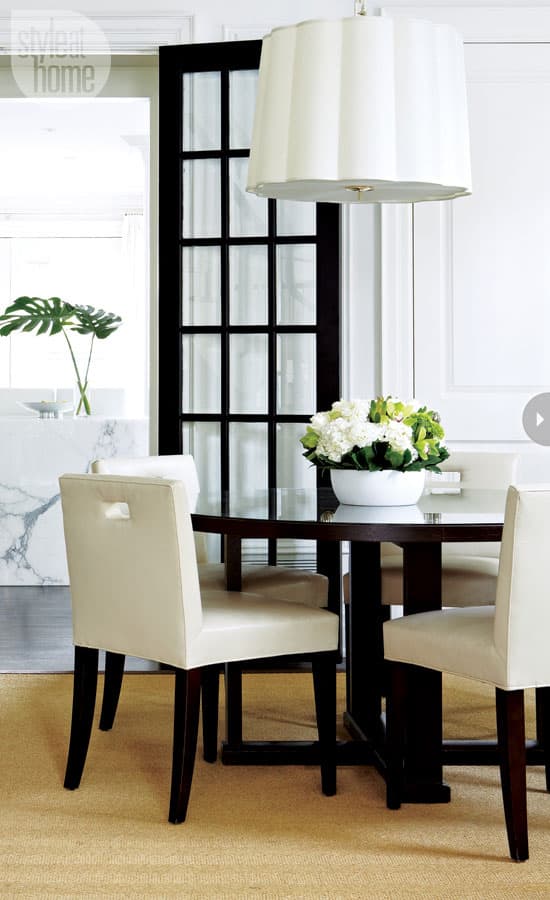 Dining chairs
The dining chairs, with their distinctive cut-out, have been with Sloan for years. “I believe if you buy good furniture, it should last a lifetime,” she says. Black-painted French doors punctuate the sightline to the kitchen. 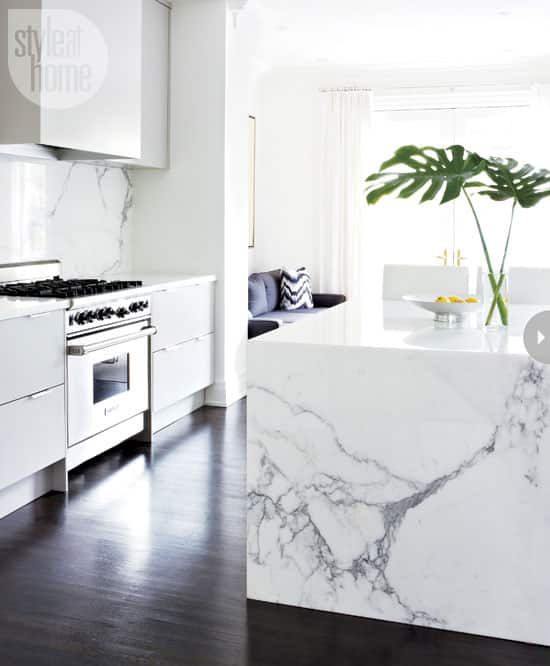 Kitchen design
Sloan chose polished Statuario Veneto marble with dramatic veining for the kitchen island and backsplash because she liked its sense of movement. The rest of the kitchen’s design is minimal, from the barely visible cabinetry hardware to the discreet range hood, which is incorporated into the upper kitchen cabinetry. The family relaxes and watches TV in the adjacent family room. 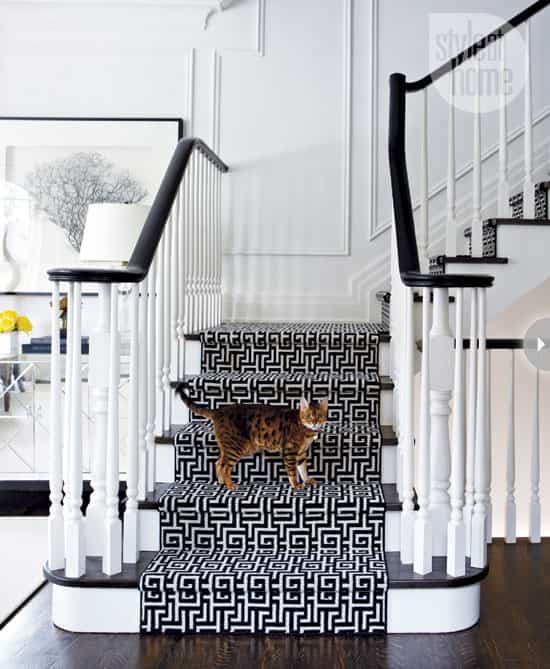 Staircase
One of homeowner and designer Sloan Mauran’s big-impact decisions was to open up the staircase to create visual flow and wow factor on the main floor. The curved black handrail adds an elegance that suits the home’s age, while a Greek key patterned stair runner feels modern and trendy. 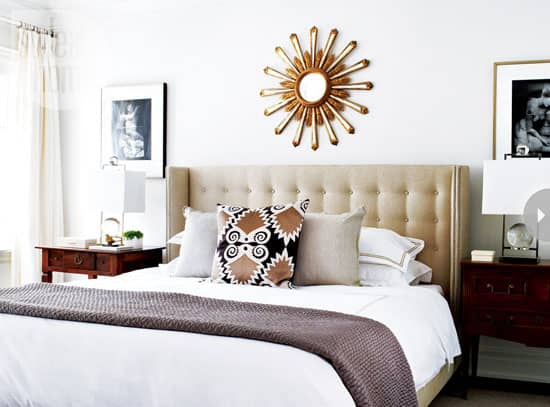 Master bedroom design
Nailhead trim adds interest to the master bedroom’s button-tufted headboard, while the organic shape of a gold sunburst mirror breaks up all the horizontal lines. Sloan chose two different nightstands but kept the height and finish the same for visual continuity. 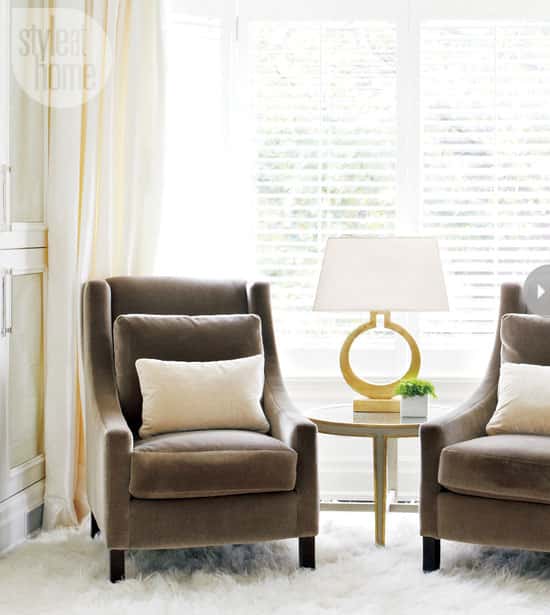 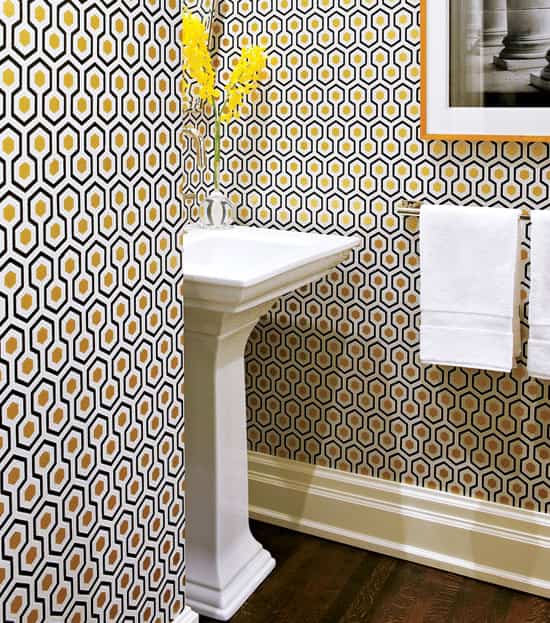 Black and gold powder room
“This is one of my favourite moments in the house,” says Sloan of the powder room’s black and gold David Hicks hexagonal print wallpaper pattern. “When you pass by and the door is ajar, it looks like a jewellery box inside.”