Share
Share
Nearly five years, including countless weekends and vacation days, is what it took to transform this modest circa-1860 farmhouse in Prince Edward County, Ont., into the charming home it is today. When Cheryl and Richard Little bought the house as a weekend retreat, its character was almost completely buried beneath layer upon layer of carpet, vinyl, linoleum, plywood, plaster and drywall. “I was skeptical when we first looked at it, but Richard saw it as a fun DIY project,” Cheryl recalls with a laugh. 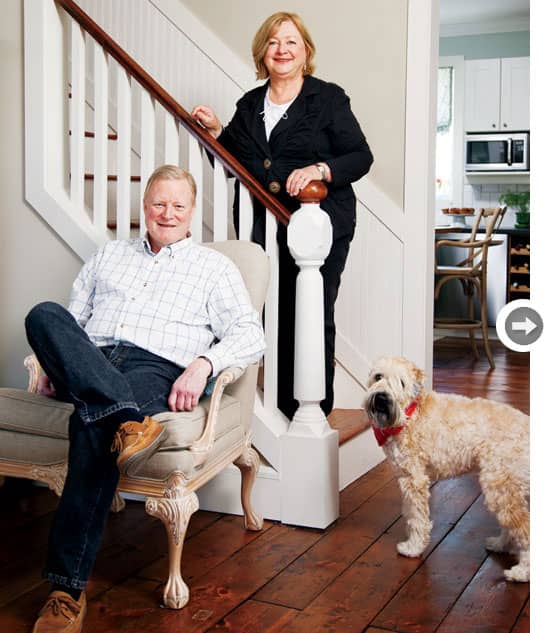 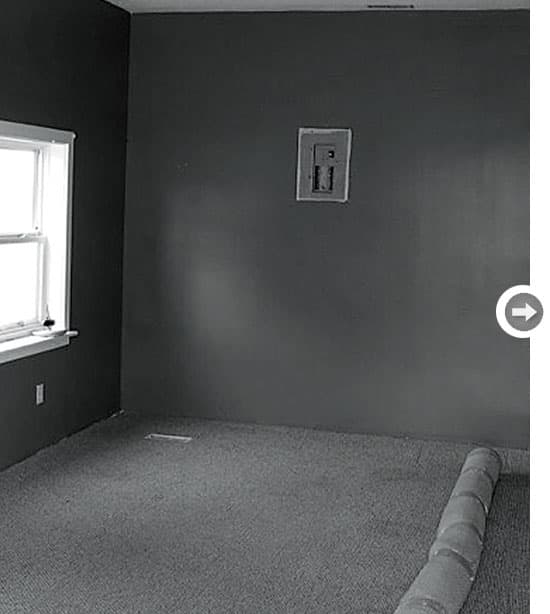 Living room: The before
Indeed, when it came to the messy bits, Richard relished doing most of it himself. “He loves doing all that stuff,” says Cheryl. He stripped back the layers to uncover the original pine plank floors throughout the house and eventually refinished them to their current rich, dark stain. Popcorn ceilings came down to reveal tongue-and-groove pine, a few 1940s-era newspapers and the original plaster and lath. “It was a matter of taking the house back to basics,” says Cheryl, who owns a home and garden products importing business with her husband. 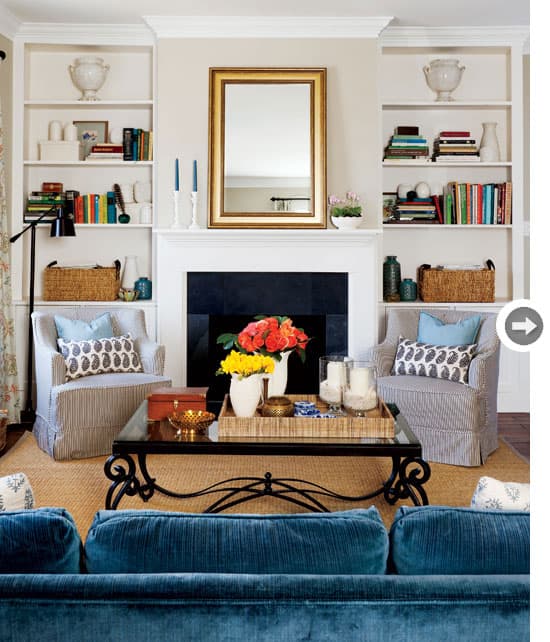 Living room: The after
Richard built the fireplace mantel and bookshelves himself and installed crown moulding throughout the house. The sofa and seagrass rug were moved as is from the couple's Toronto home to the farm. The coffee table's base has an oil-rubbed bronze finish to simulate age, and a pair of armchairs were slipcovered in black and white ticking. 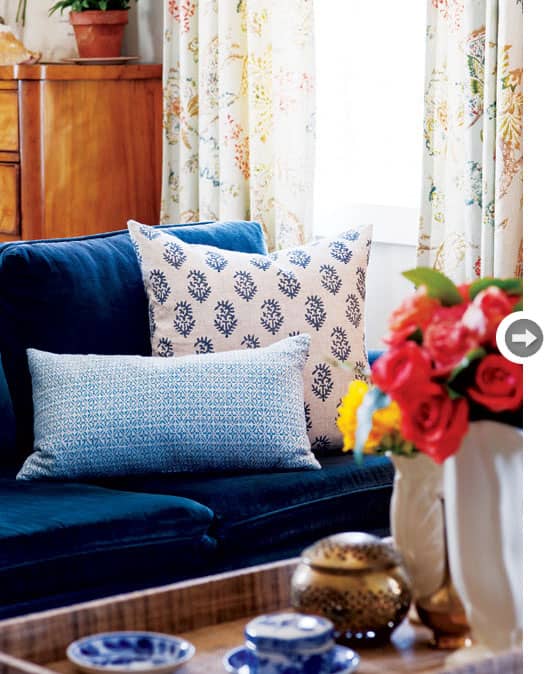 The updated look
Decorator Michael Penney chose the drapery fabric for its soft robin's egg blue background, and the fact that its leaf-and-branch floral motif wasn't overly sweet and feminine. Blocked-printed toss cushions lend the room a global vibe that helps it feel modern and updated. 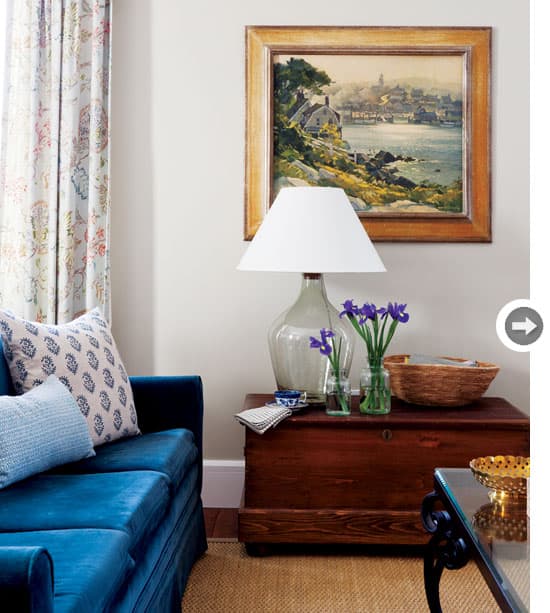 Modern edge
A painting Cheryl bought at an auction in Cobourg, Ont., hangs over an antique pine chest in the living room. The airy glass table lamp gives this vignette a bit of modern edge.

With most of Richard’s hard work finished, the fun part then began for Cheryl. To pull the three-bedroom, 1,500-square-foot house together, she called upon decorator Michael Penney to help choose paint colours, fabrics and furnishings. The pair worked together to create an updated take on the country aesthetic, keeping things simple and pretty while avoiding an overly clichéd look. 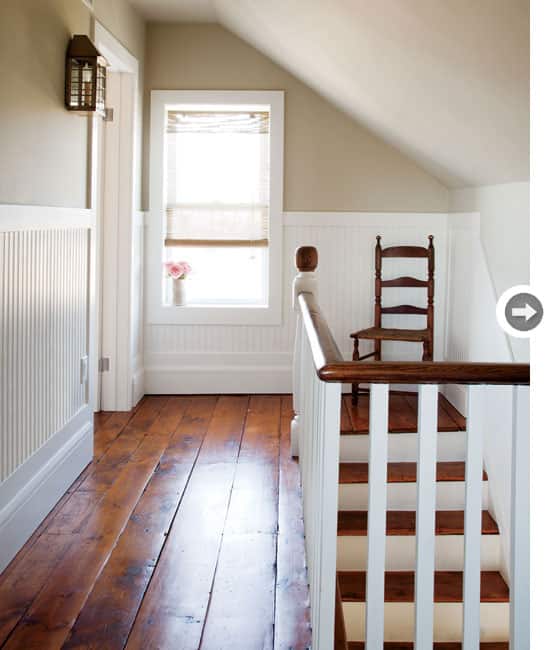 Architectural features
Tongue-and-groove wainscotting was installed by Richard up the staircase and through the upper hall. Although it wasn’t an original architectural feature, it was uncovered in places elsewhere in the house, so the Littles felt it would be an appropriate addition. Original pine plank hardwoord floors were revealed and refinished in a rich brown stain.

Happily, Michael’s keen eye for older pieces that need just a lick of paint or a slipcover to make them sing found plenty of furniture sitting in the Littles’ Toronto basement. Many items were repurposed for the farmhouse, including a teal velvet sofa that was the first large piece of furniture the couple bought after they were married. “Cheryl had written it off as hopelessly dated,” recalls Michael, “but I assured her it was actually very on-trend right now. It’s a good-quality piece, and the construction is really solid.” Quite a few items throughout the house have a similar provenance, which enabled everything to come together on budget. 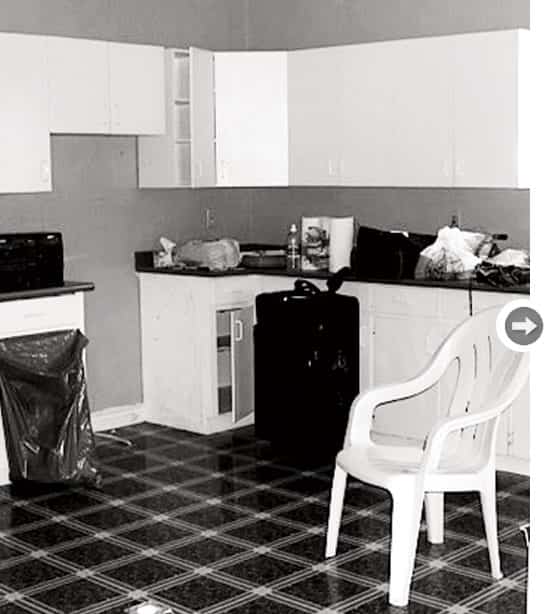 Kitchen: The before
The farmhouse kitchen is now a cozy and inviting spot to spend time relaxing with friends, hosting family gatherings and celebrating special holidays. And thankfully, the weekends are now free of demolition and hard labour. 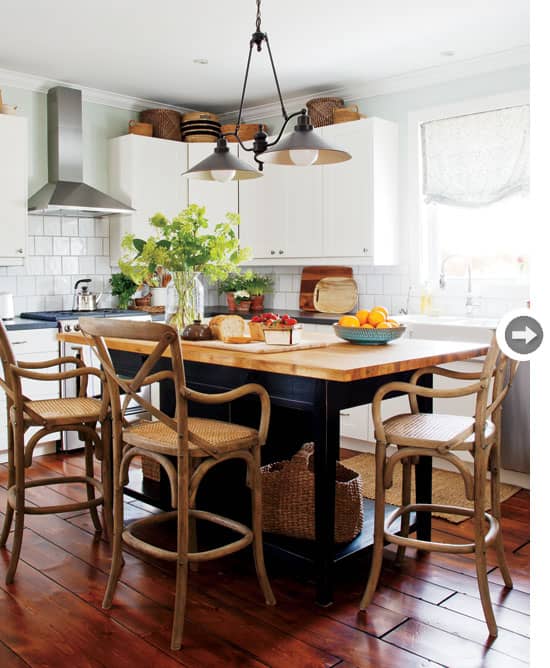 Kitchen design: The after
Richard installed the white Shaker-style IKEA kitchen himself. The basic wooden work table was treated to a new butcher-block top to create a functional island for cooking prep and eating. Handmade square tiles laid in a brick pattern on the backsplash were suggested by Michael as a more interesting alternative to the ubiquitous rectangular subway tiles. The beige grout is more practical in a kitchen setting. 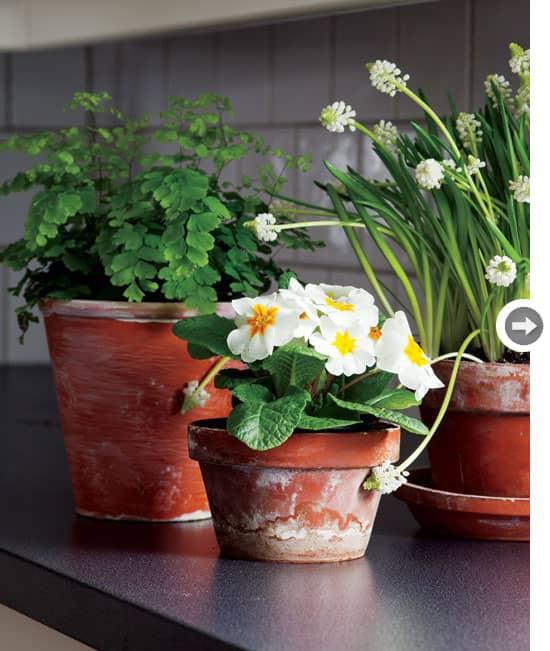 Country kitchen
A collection of soft baskets grouped sparingly atop the kitchen cabinets is an updated take on the country tradition. The window's Roman blind offers a touch of softness without the formailty. 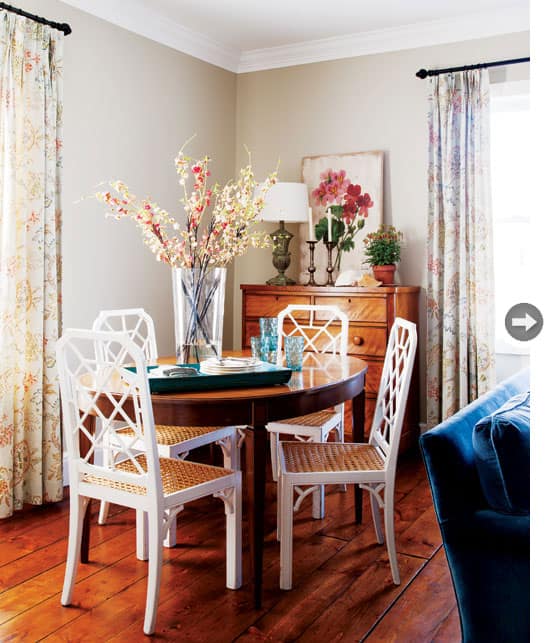 Dining room
Michael loves the idea of using a dresser in the dining room for all the storage it provides. He kept the display on top loose and layered rather than formal and symmetrical to create a more casual feeling, appropriate to the farmhouse. 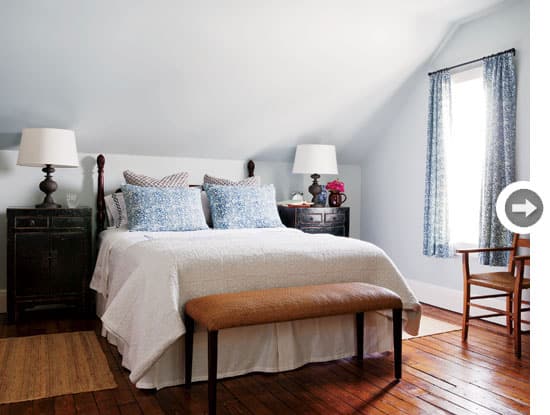 Master bedroom
Michael suggested cropped drapery in the master bedroom for a less formal, more cottagey effect. The hip batik-style pattern of the fabric, also used on the bed's toss cushions, gives the drapery a fresh look and avoids a granny-ish feel. 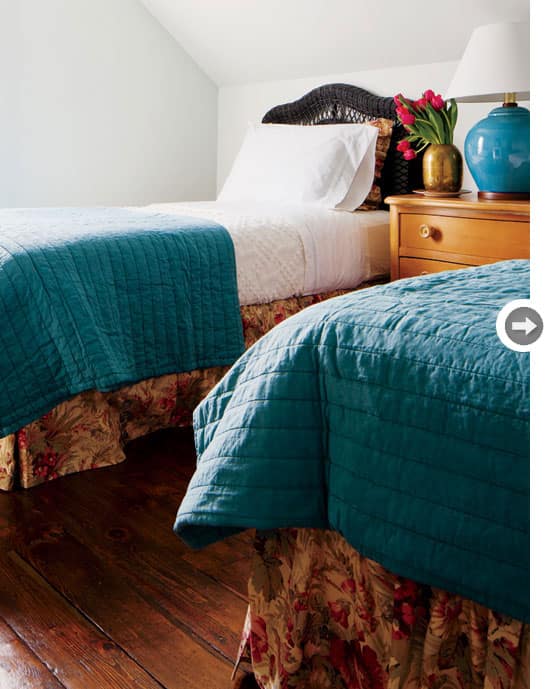 Guest bedroom
A pair of white wicker headboardds from a vintage shop were treated to a coat of black spray paint to take them from shabby chic to sophisticated country. 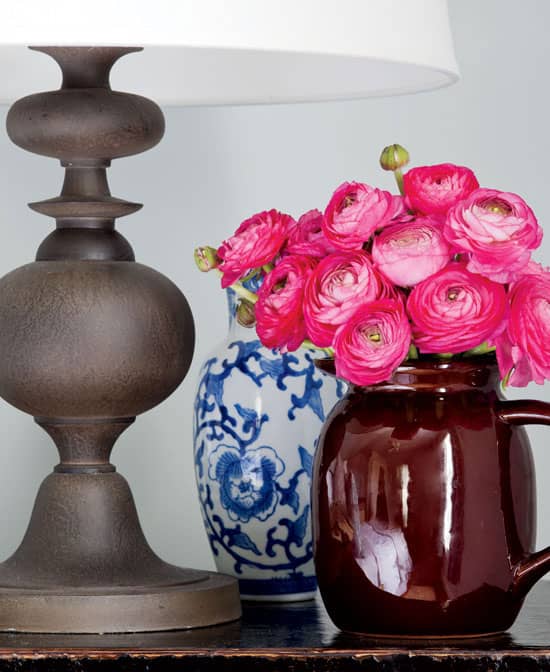