It’s not often that you move into a dwelling that once belonged to a former president of Venezuela, but these homeowners did – and what an interior it was! Completely overdone, the Miami, Florida, condo was a terrible cheese-like orange colour and had golden doorknobs, dark cabinetry and dated wall-to-wall carpeting. But that didn’t prevent the Toronto-based couple (who wanted to be closer to their best friends already living in the building) from recognizing the sprawling 2,210-square-foot unit’s potential – not to mention its expansive 405-square-foot balcony with magnificent city and beach views – and purchasing it as their winter retreat from Canada’s colder months. 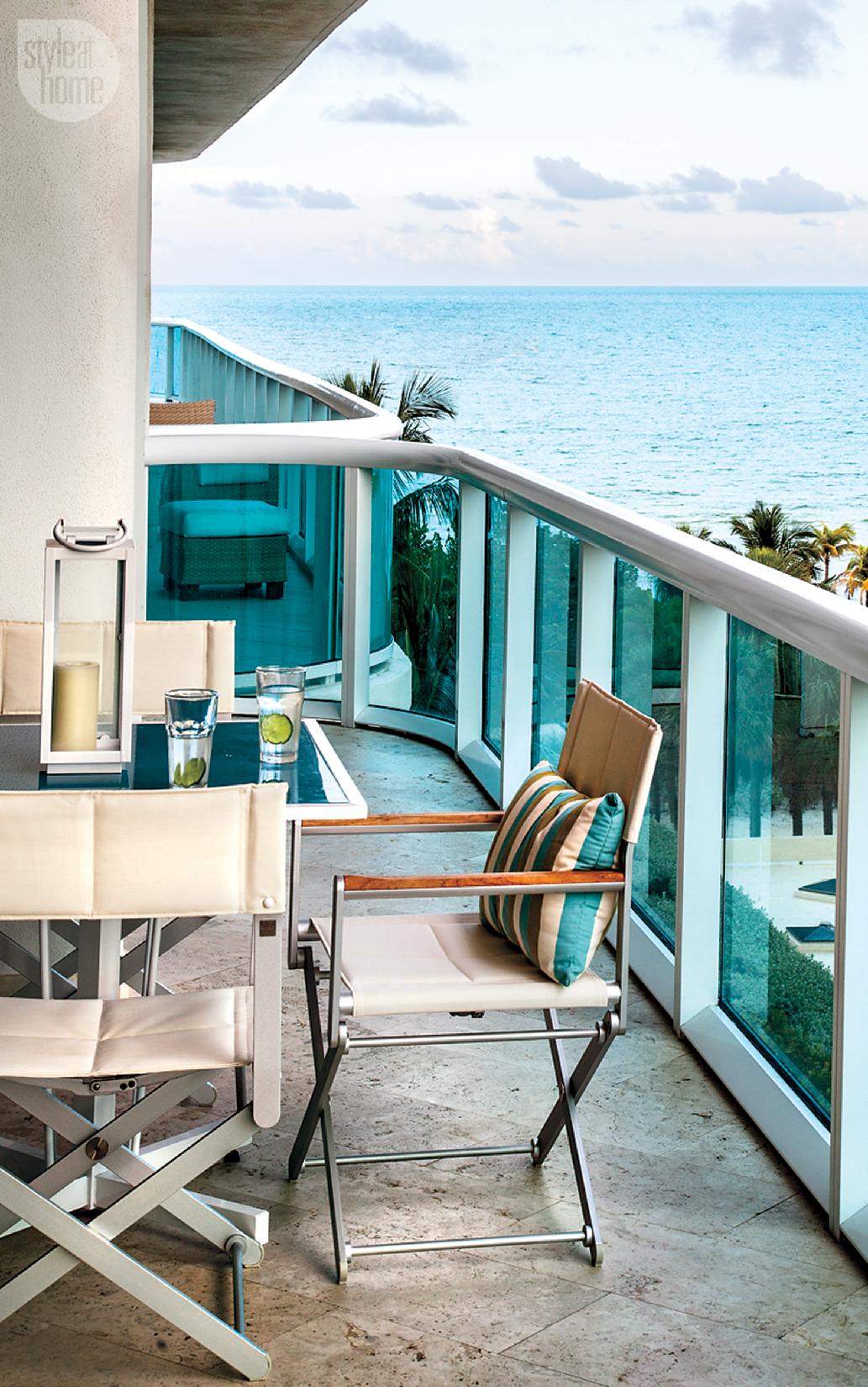 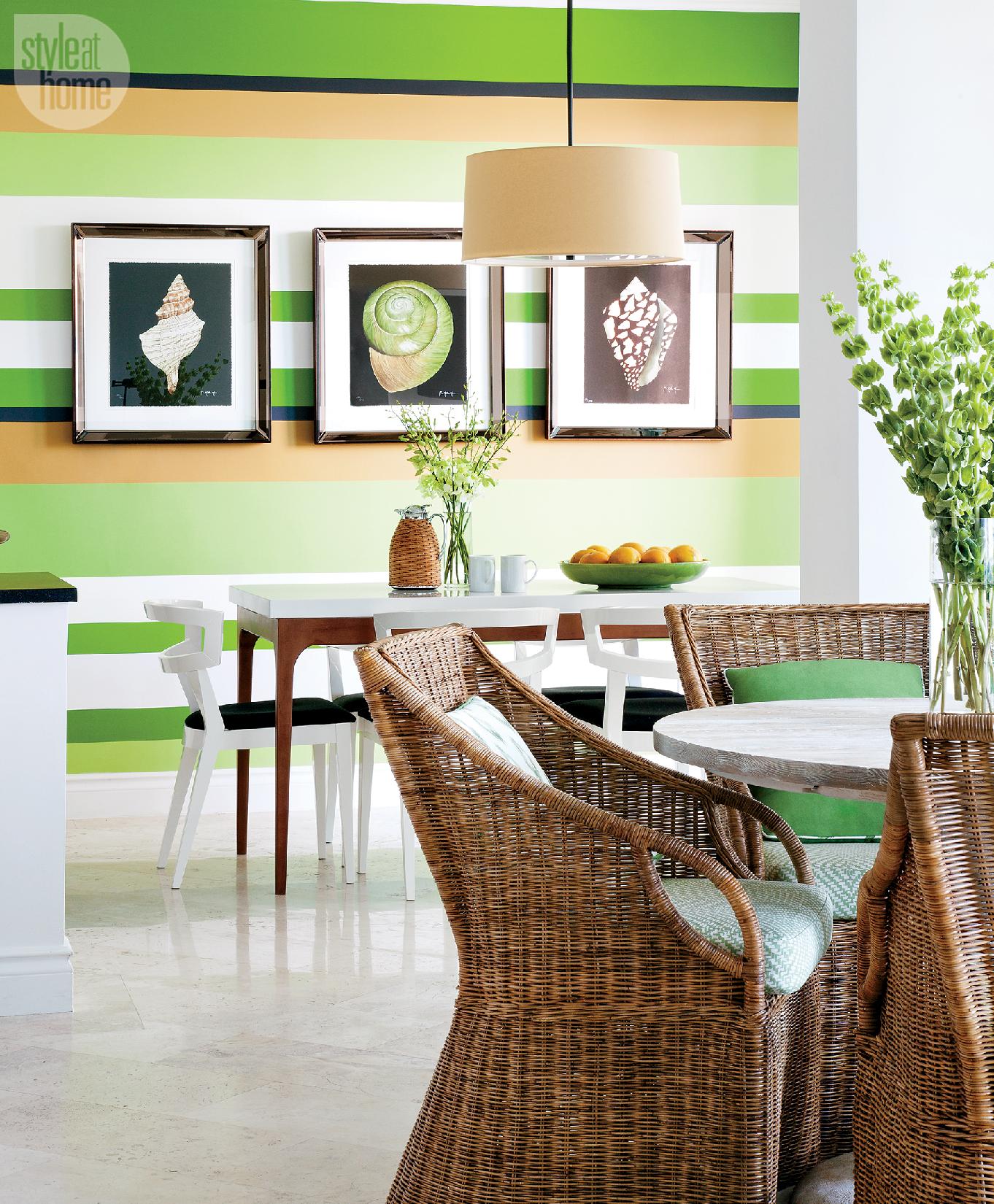 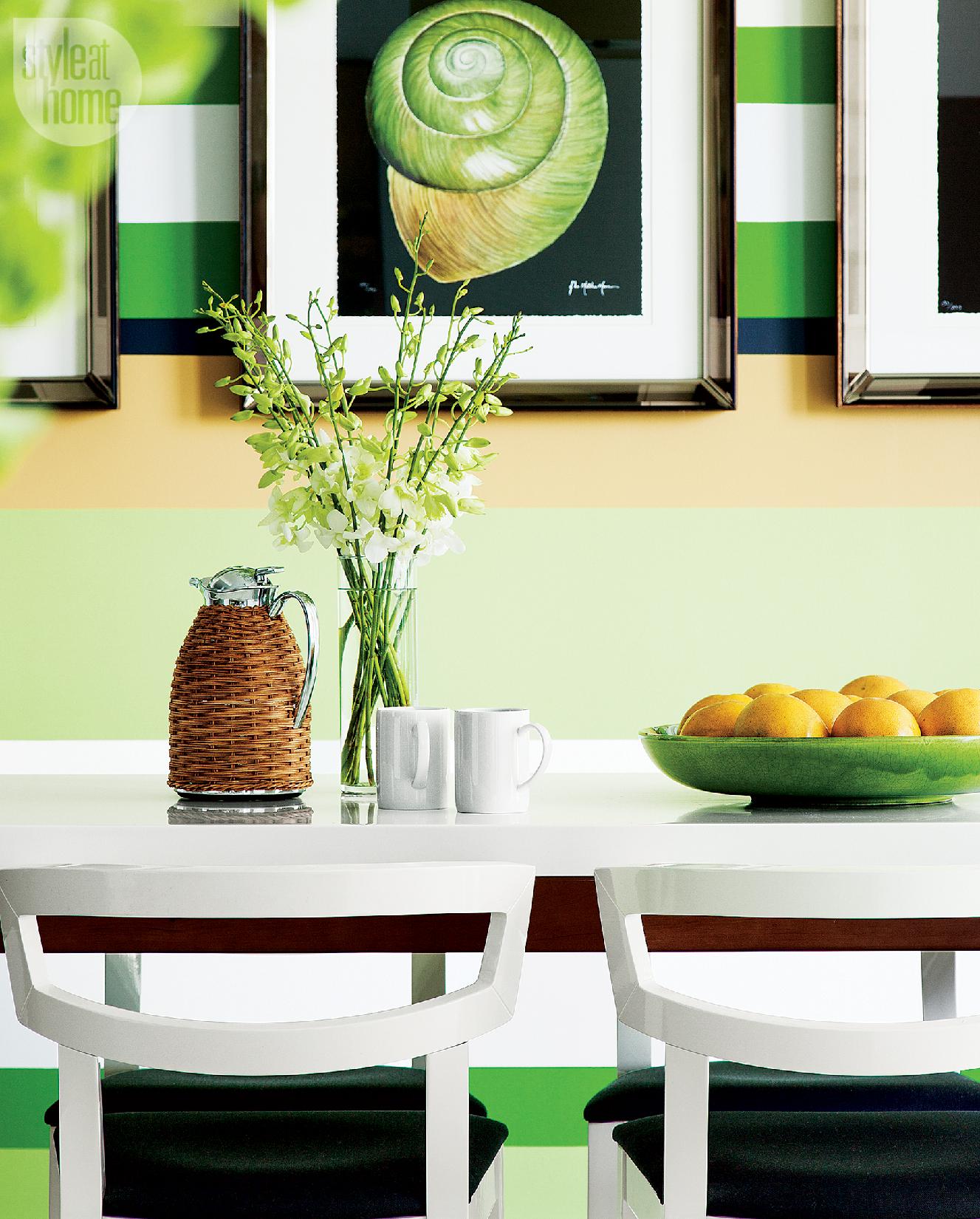 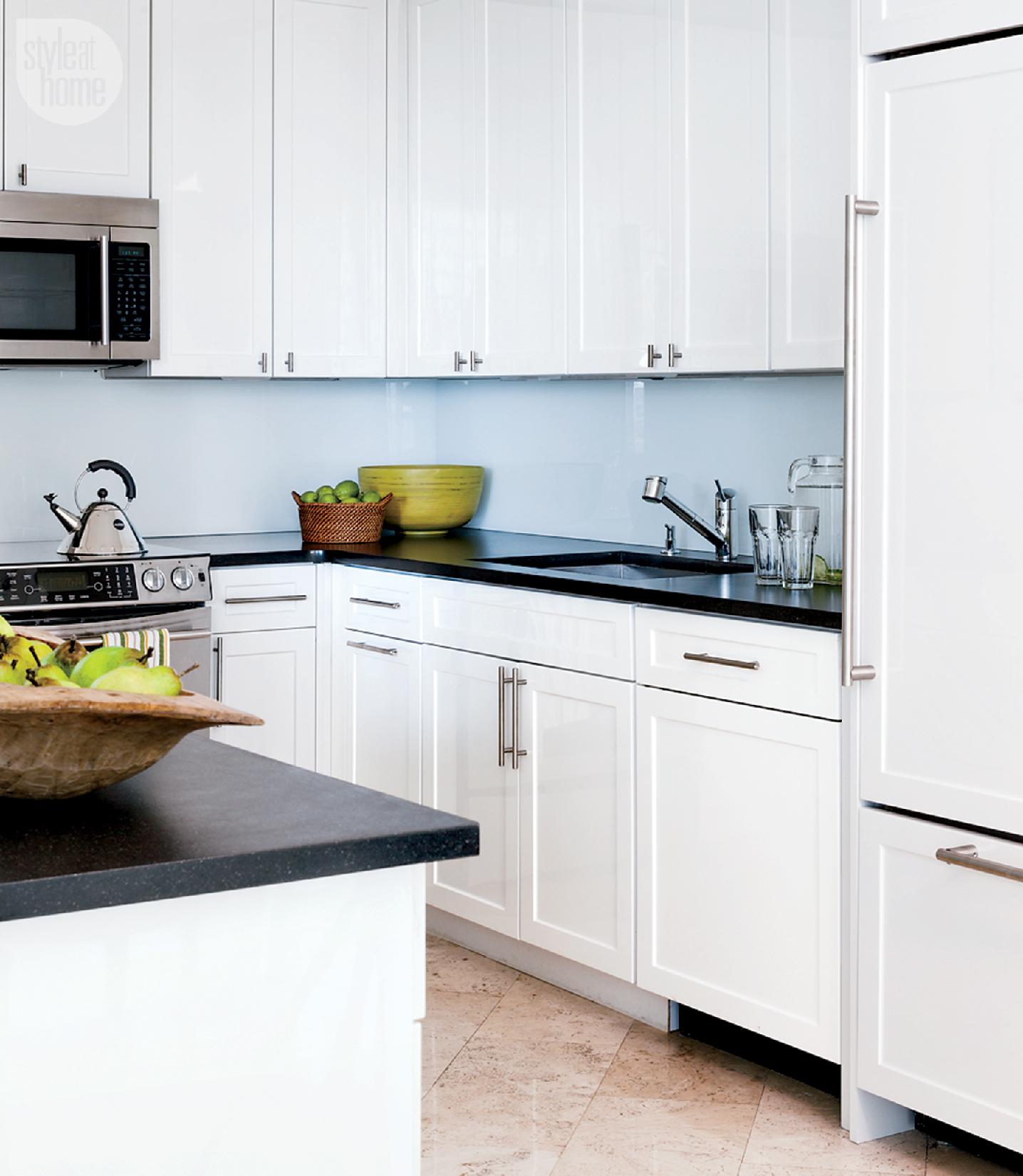 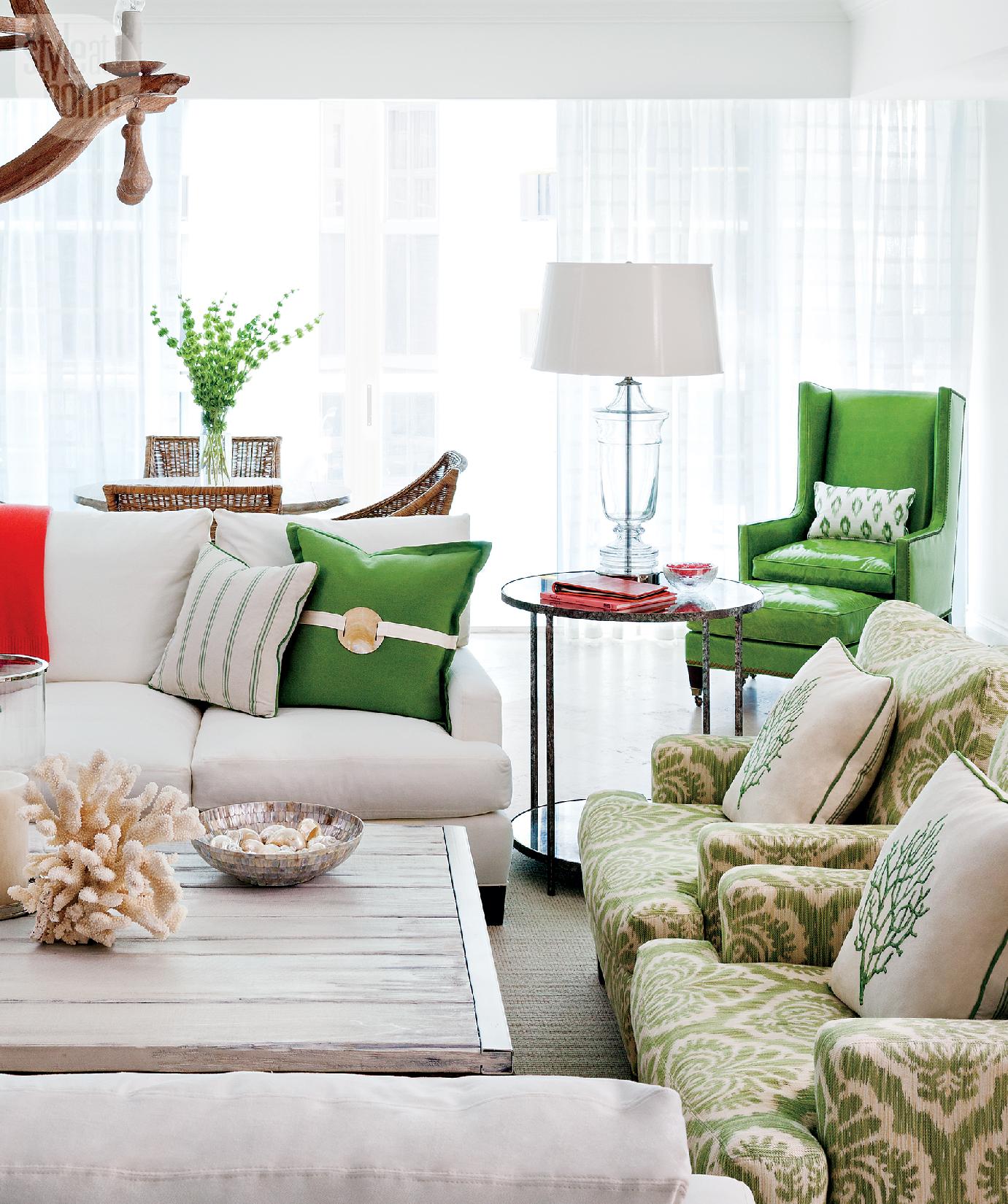 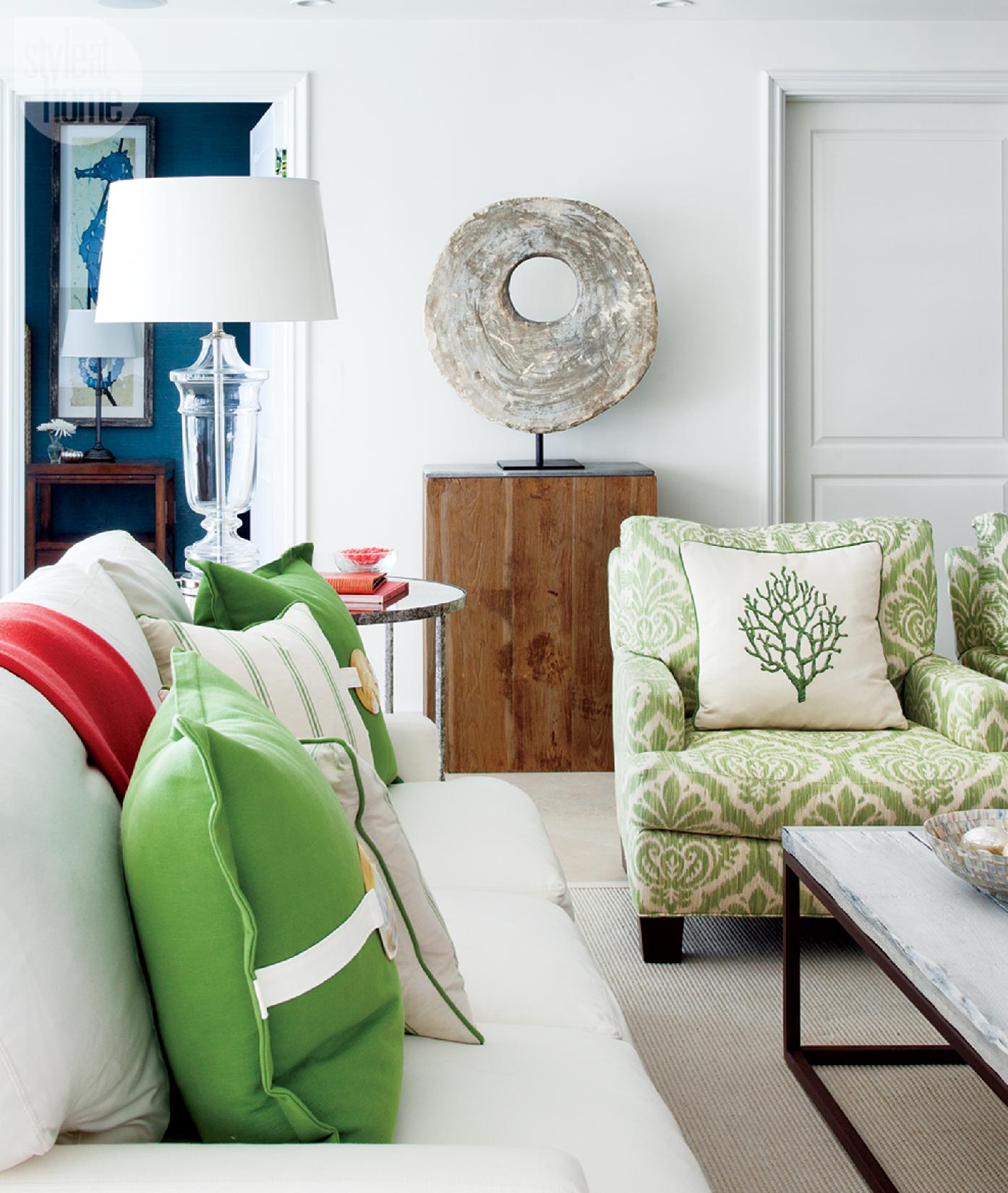 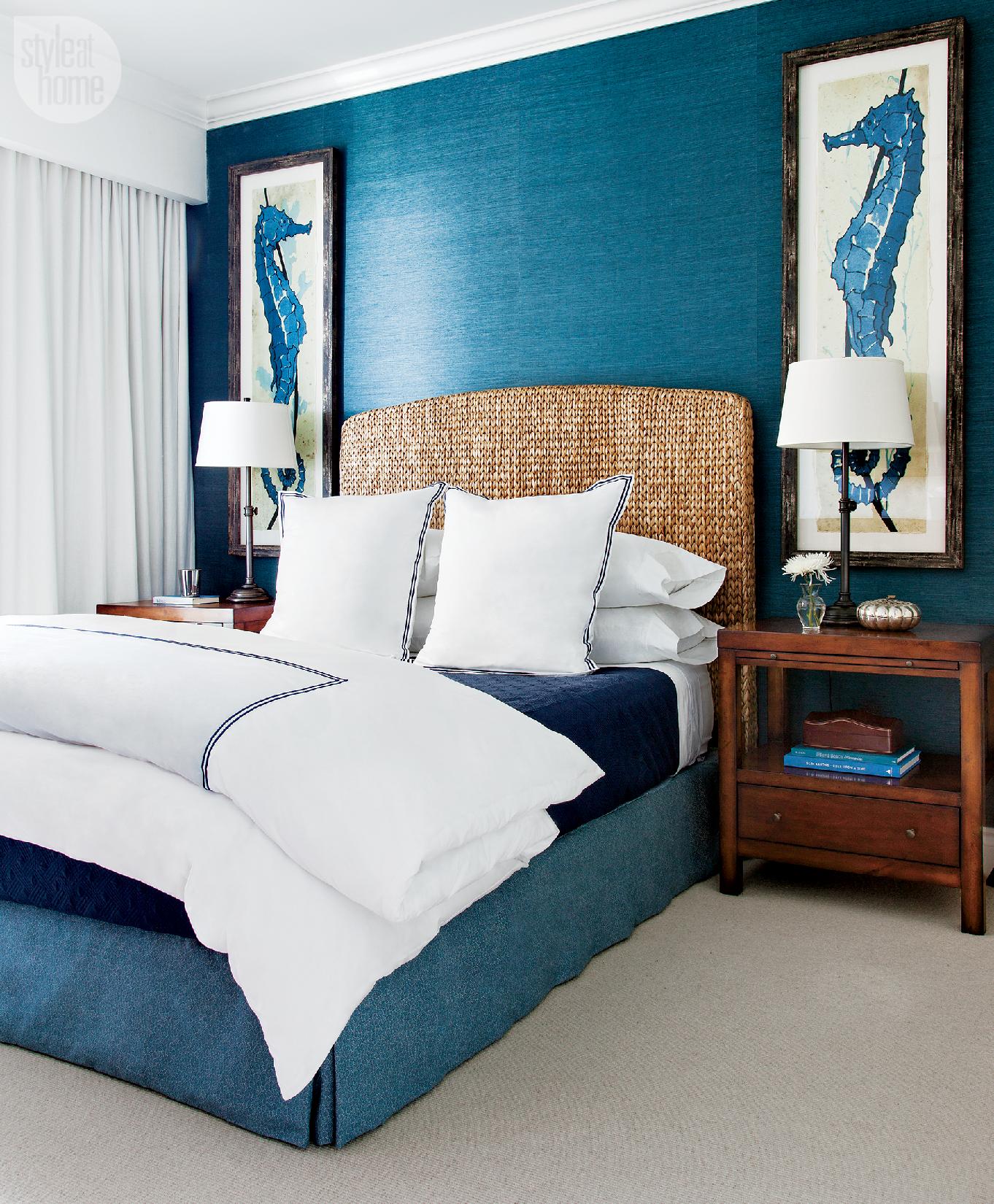 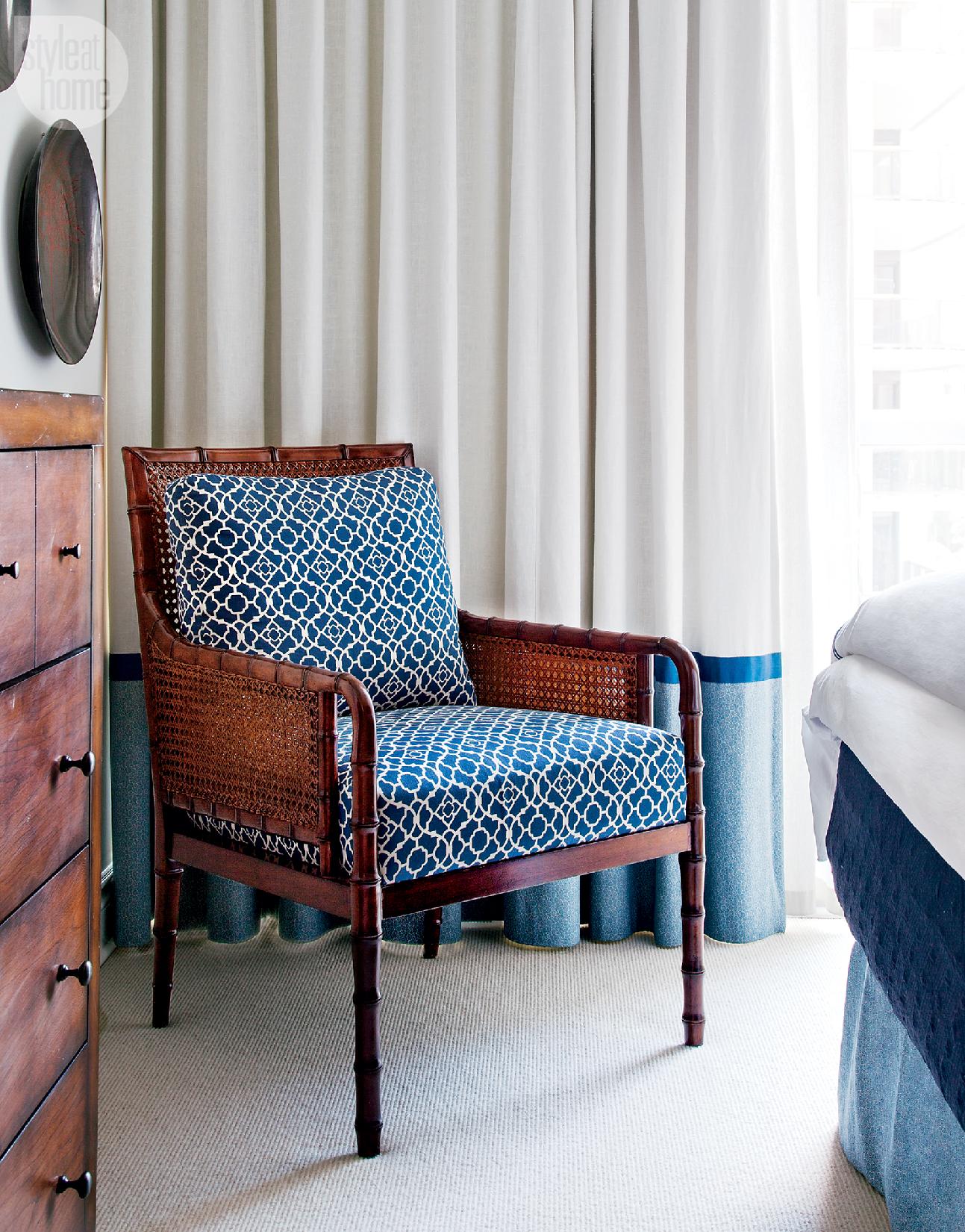 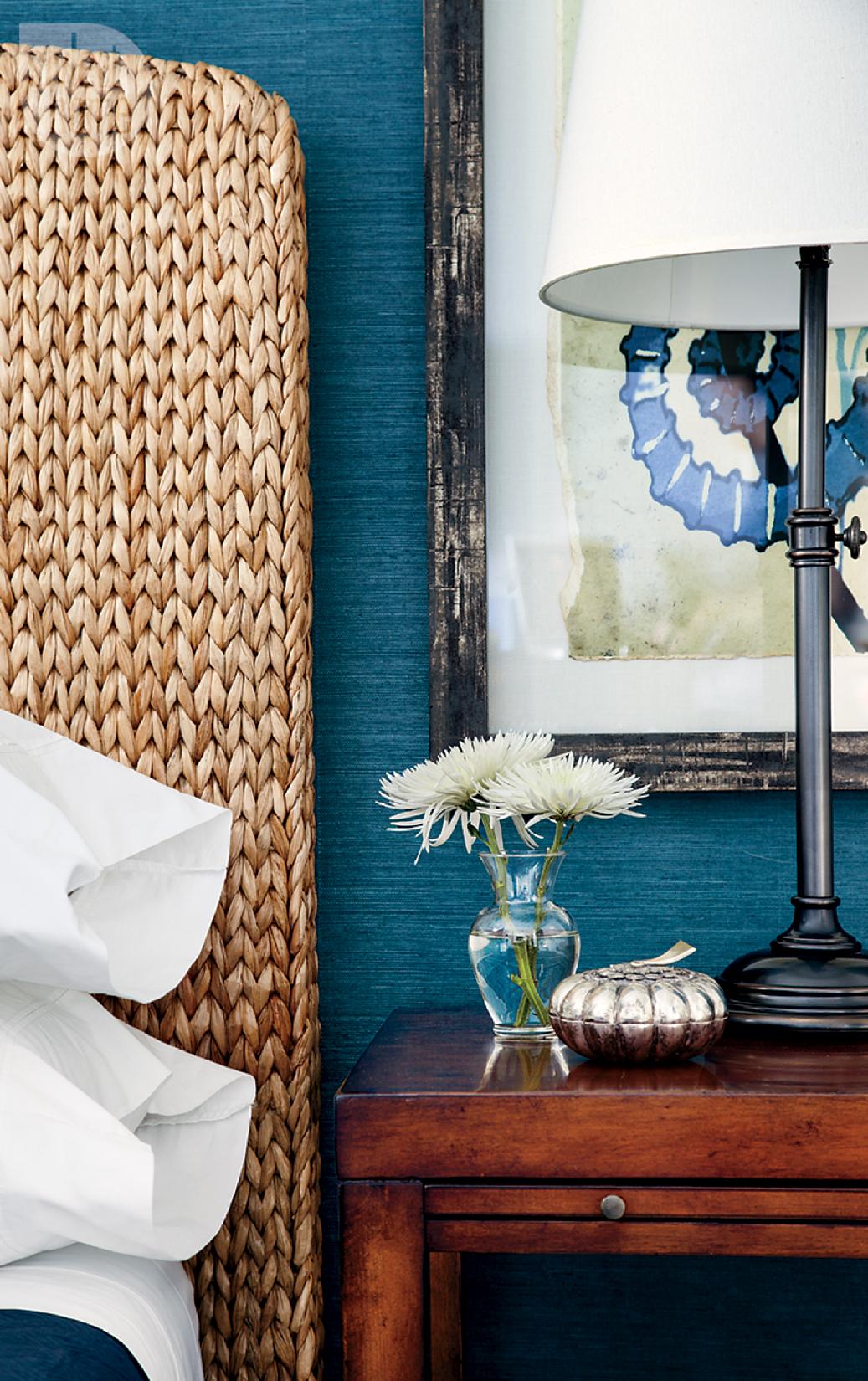 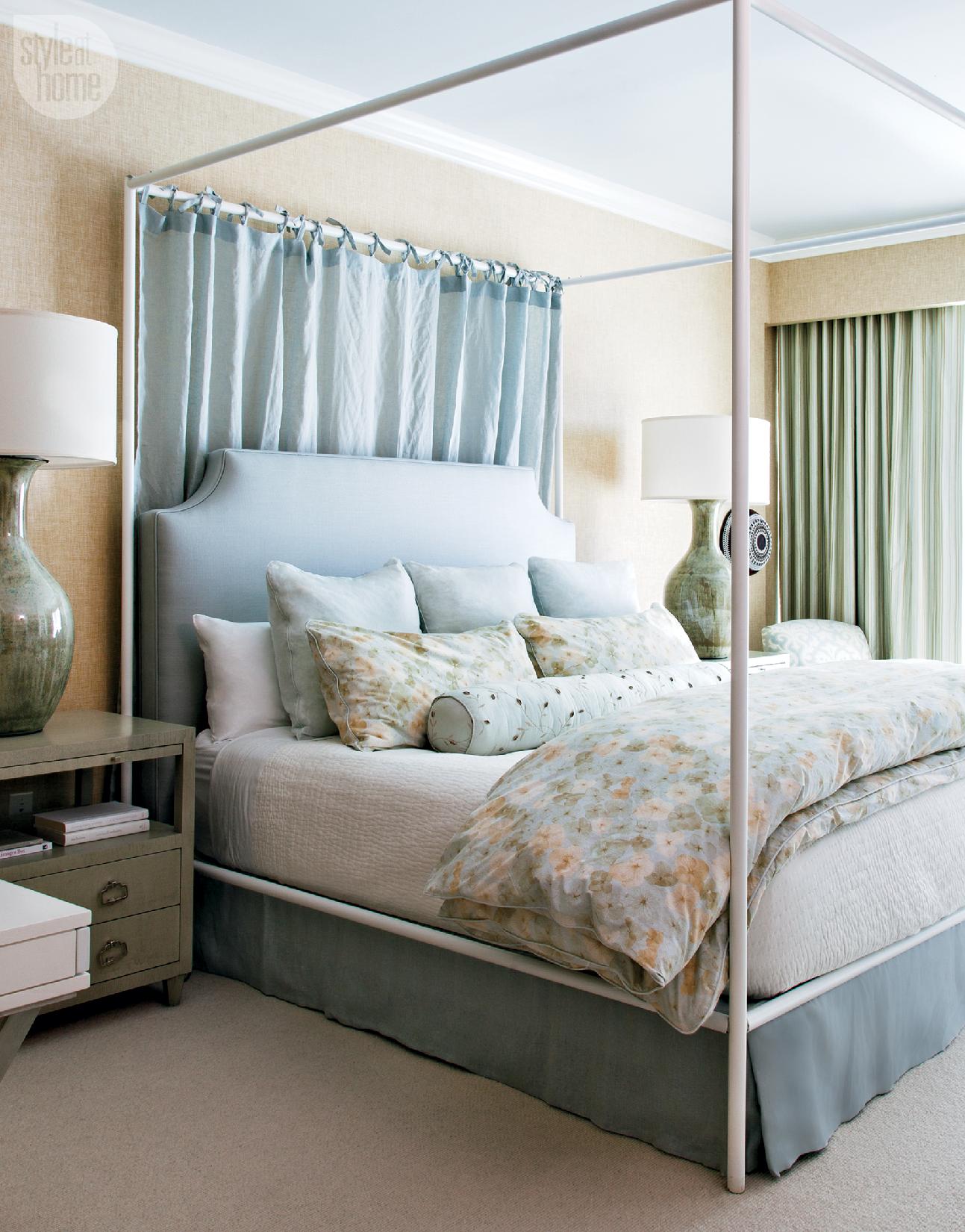 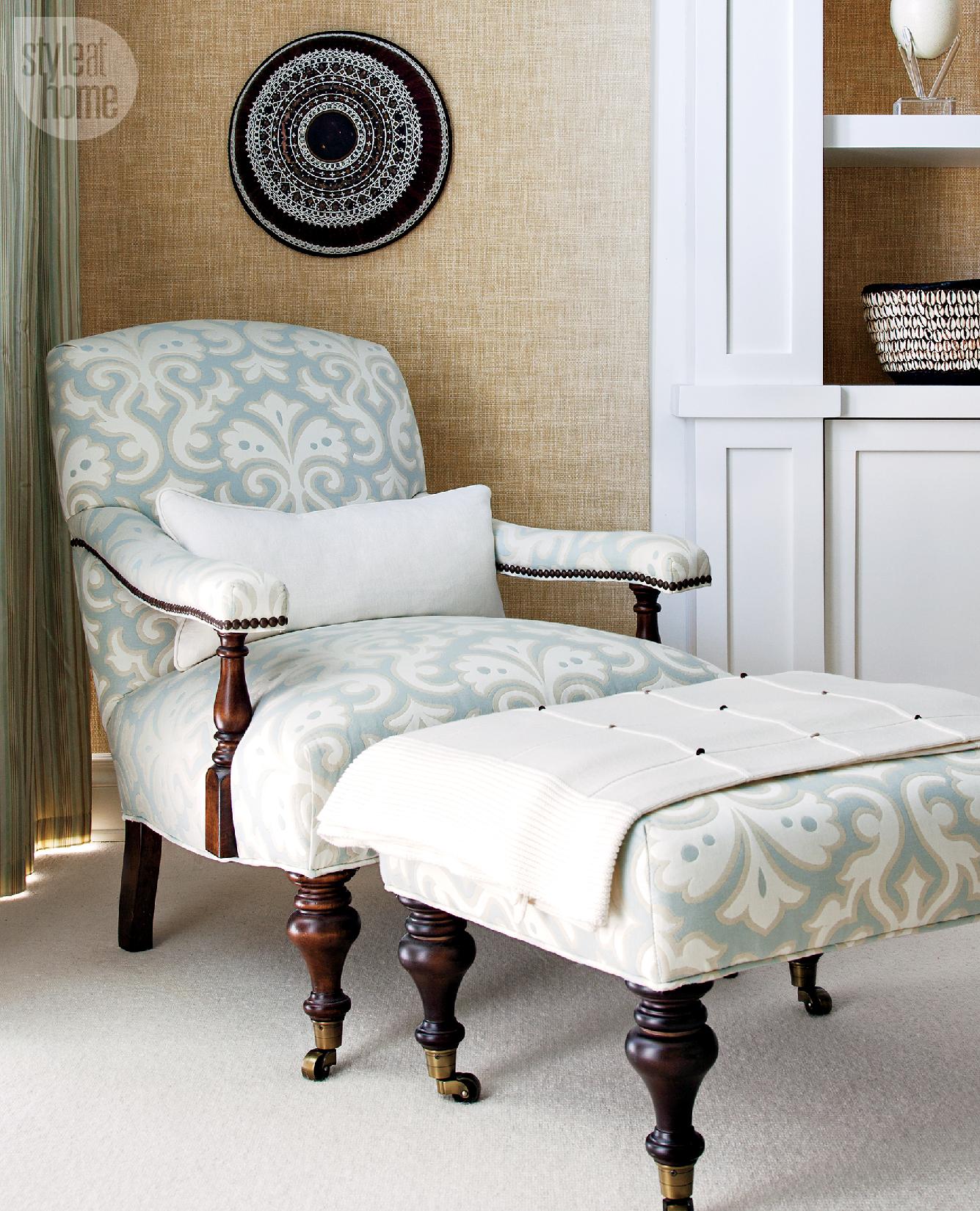 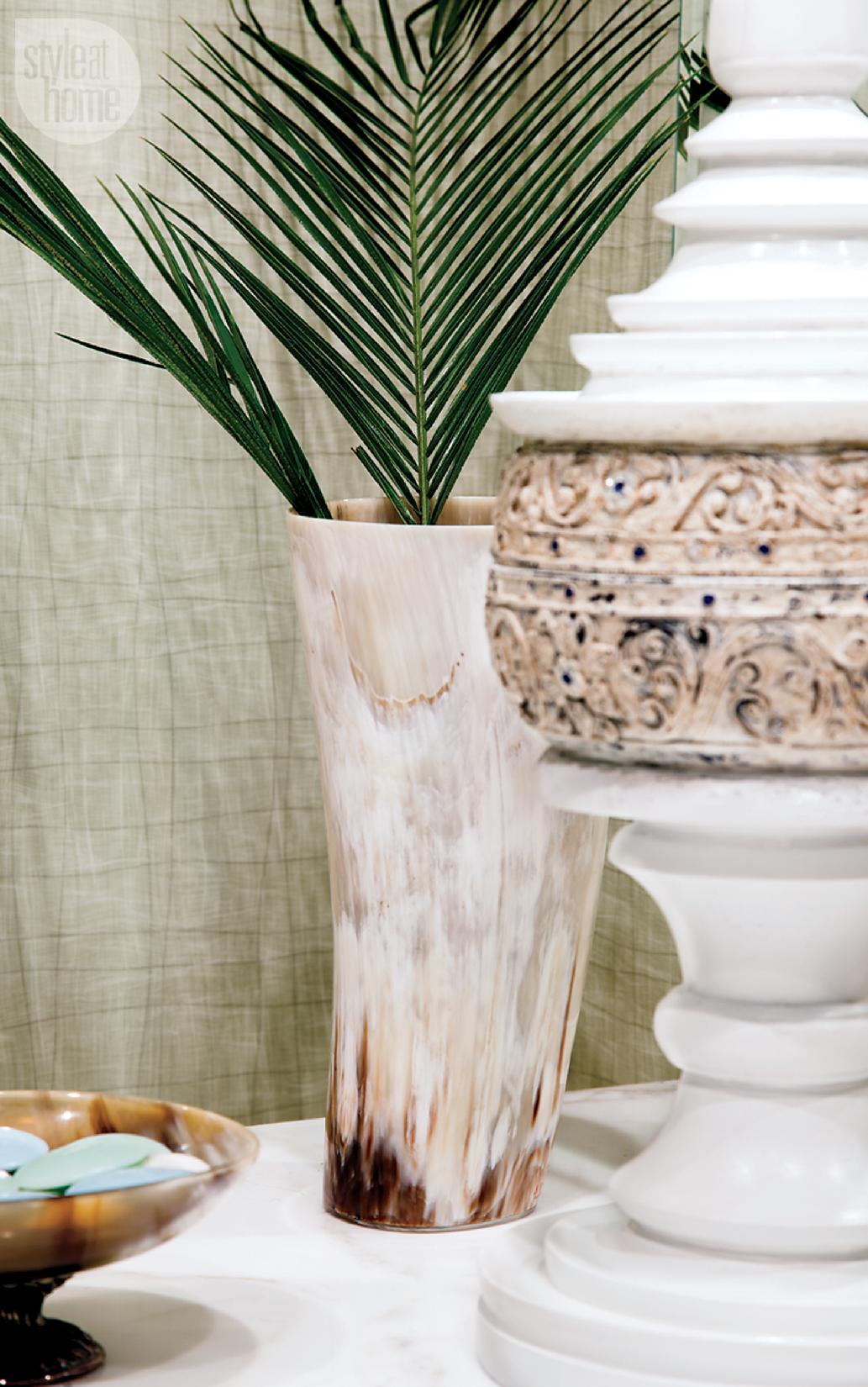 “It’s an ocean front property, so the homeowners wanted to bring the outside in. We did that with blues and greens because this condo offers views of both ocean and coast” - Marcel Ruiz, designer.

From apple to olive green, the vibrant striped wall in the dining room incorporates the various hues used throughout this Miami, Florida, condo.

The idiosyncratic flourish – note that the stripes are not all uniform in size – really makes a statement. “Stripes are so fun,” says designer Marcel Ruiz, “but at the same time can be very elegant.”

The homeowners wanted the luminous blue glass kitchen backsplash to have a clean, uninterrupted look, so Marcel had the outlets hidden under the cabinets. The end result is as sleek and luxurious as the lava stone kitchen countertops: “They are beautiful and smooth like velvet,” he says, “and look sharp against the white cabinetry.”

Lounging is encouraged in this laid-back living room, where a pair of green damask-patterned armchairs kick up the scene. Ocean-inspired elements include the whitewashed coffee table, decorated with notions of the shore, and the rustic wooden chandelier.

Peppy toss cushions are an easy way to incorporate colour without commitment.

In the second bedroom, banding was added to the drapery to make it look polished and echo the blue bedding and fabric on the cane chair.

“Layering materials enhances the room,” says Marcel of his choice to primp the bed in the master bedroom with both a fabric headboard and a linen panel. “Having both gives a luxurious hotel-like look,” says Marcel. The walls evoke sand, while the light blue on the ceiling is like the Miami sky for a lulling, soothing effect.

There are plenty of reasons to love this sweet spot in the master bedroom, from the pretty pastel fabric on the chair and ottoman right down to the furniture’s dainty feet. The bookcase houses some of the homeowners’ beloved exotic knick-knacks from Jalan Jalan, which look at home against the sandy-coloured wallcovering.

To keep it cohesive, many of the accessories in the condo, including this vase, bowl and urn in the powder room, have an exotic yet beachy vibe.