Share
Share
Bursting with character and brimming with charm, Marlie Waks's Toronto condo reflects her bubbly personality to a T, thanks in part to her secret weapon: design editor Jessica Waks. Because, really, who knows you better than your own sister? 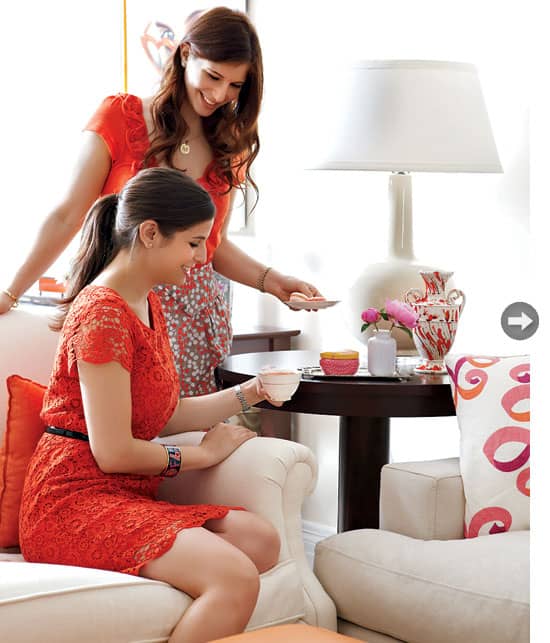 Decorating with personality
Marlie Waks has the kind of magnetic personality – bright smile, infectious laugh – that attracts people like butterflies to summer blooms. Equally charming? Marlie’s design style, an eclectic mix of shabby chic and all-white rooms enlivened with pops of colour. “I’ve always loved white, but I grew up in a house with three sisters, three dogs and four cats, so it was never practical,” explains the Toronto leasing representative, who bought her first condo last year. “With my own home, I wanted to create a space that would really reflect who I am.” 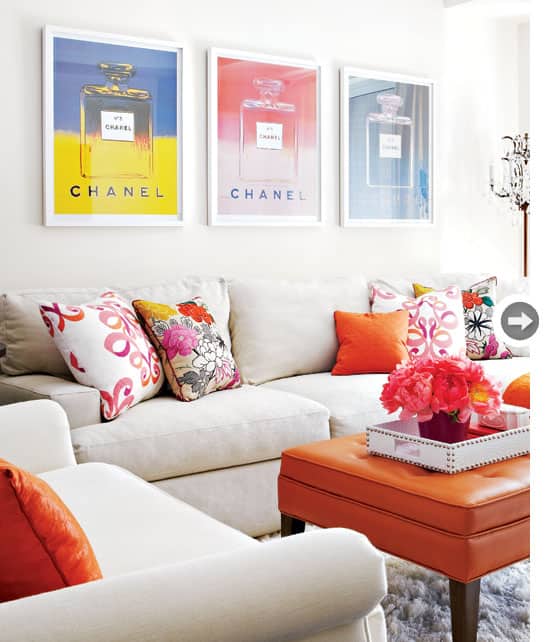 Chic living room
The living room showcases homeowner Marlie Waks’s favourite save (the Chanel posters ordered from eBay) and top splurge (the chic and cheerful custom throw pillows).“The prints were a stylish way to warm up the room,” says her sister, design editor Jessica Waks. Marlie agrees: “I love the colours. Jess tried to convince me to do an entire chair in one of them, but that was too much for me.” 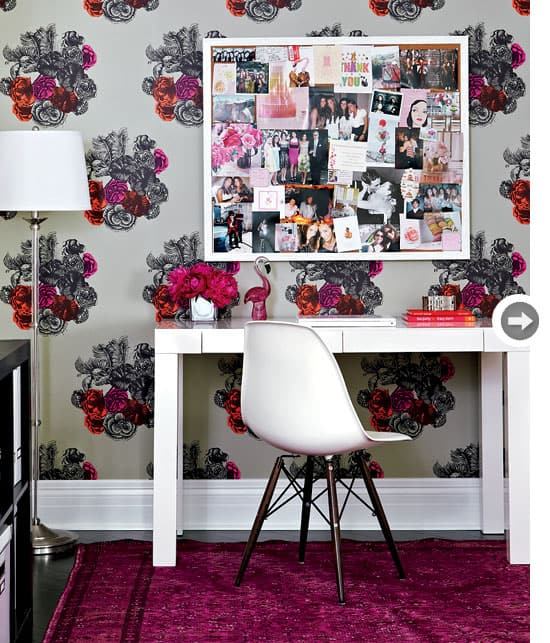 Home office
Marlie planned to invest in a few major pieces for her new home, such as the fuchsia Second Life rug that Jessica describes as the “crowning jewel” of the home office. Still, sticking to a decorating budget remained a key concern. To keep costs under control while creating a “clean, serene, joyous” space, Jessica embraced a high/low mix. The sisters shopped together, saving on shelving at IKEA but splurging on bed linens from Au Lit Fine Linens. Jessica trolled the web looking for deals on artwork like the living room’s vintage Chanel posters (an eBay score from a seller in Paris).

The graphic wallpaper was a splurge, but Jessica points out that covering only one wall in the gorgeous print helped to minimize costs. “It’s all about mixing in designer touches and not being afraid to customize big box items with your own special accents,” explains Jessica. 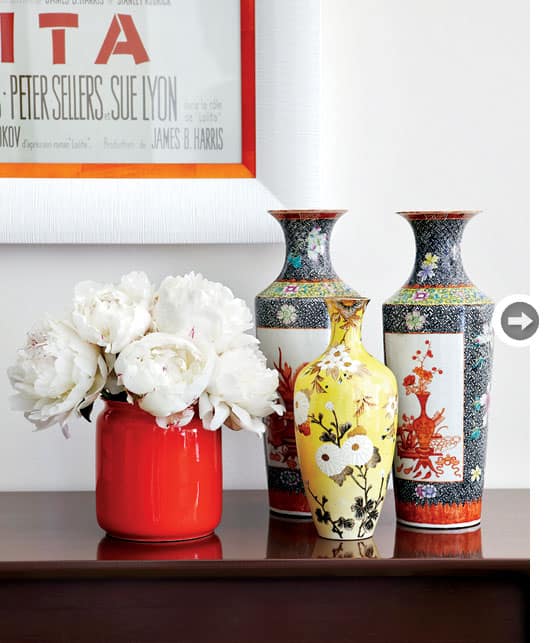 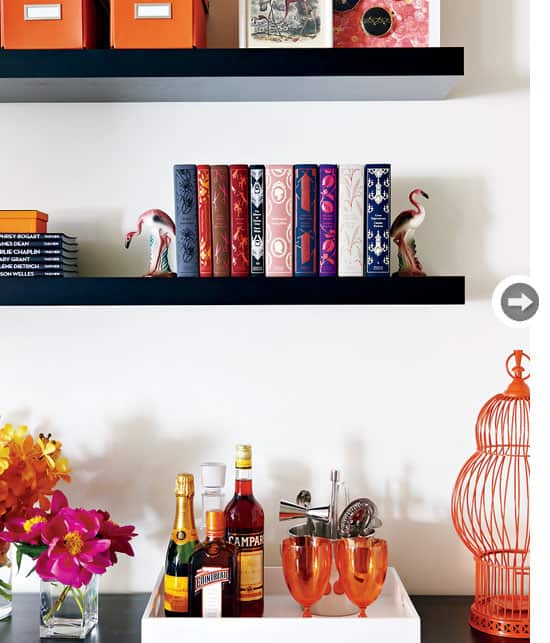 Accessorizing open shelves
Jessica encouraged Marlie's friends to buy her books as housewarming gifts as a way to reinforce the colour scheme. 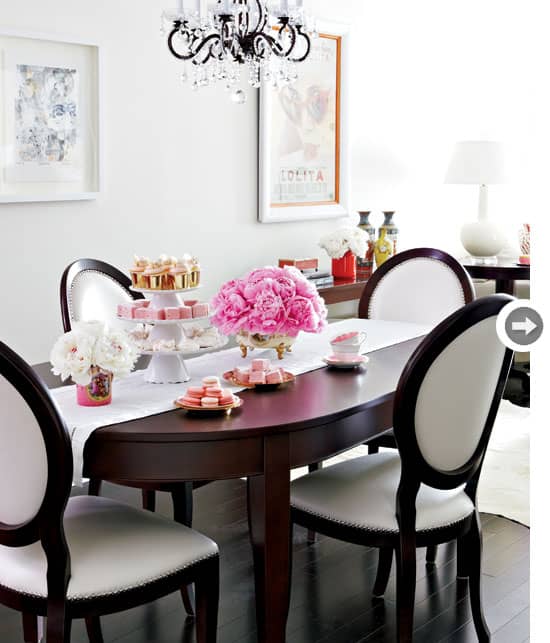 Minimalist dining room
Jessica used rugs and artwork to divide the open-concept condo into unique zones. In the dining room, the clean minimalism of the modern Louis XVI-style chairs creates an impactful focal point, while a stunning chandelier adds a girlie touch. “Marlie is so fun-loving, with lots of personality,” says Jessica. “This space is definitely very her.” 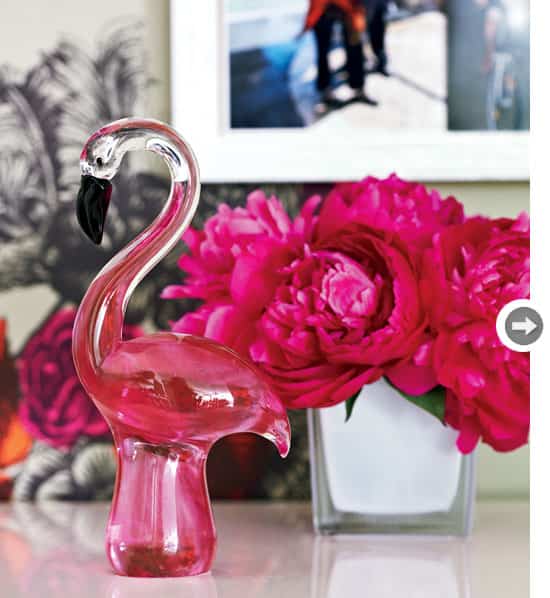 Signature decor accents
Flamingos are a Marlie signature, showing up in decor accessories like this glass figurine given to her by a friend. "They're nostalgic for me because of our childhood family vacations to Florida," she explains. 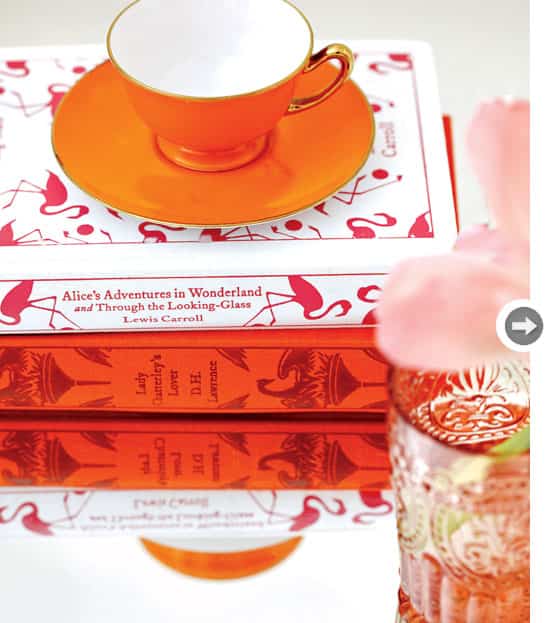 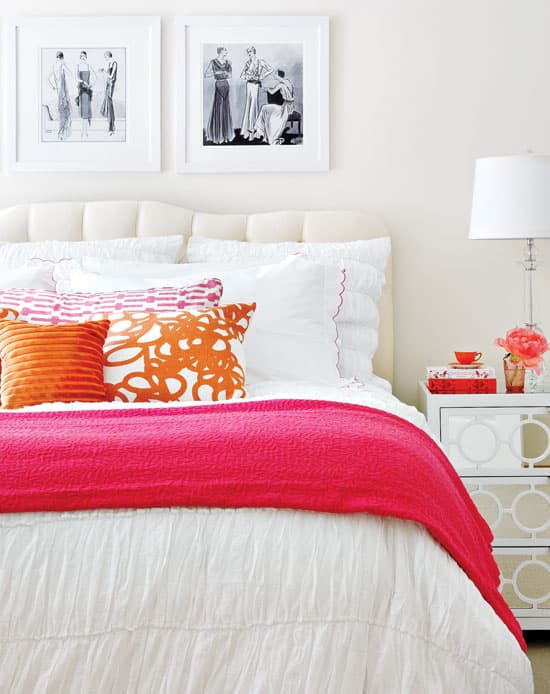 Fresh bedroom
Fresh and light, the bedroom gives the overall impression of being colourful, but all the big pieces are neutral. As Jessica says, “There’s nothing better than a white bedroom. It gives you that feeling of waking up in a cloud.” The bedroom is Marlie’s favourite space. “All the elements come together here: It’s white and clean, with pops of personality – and there’s lots of closet space!” she says.

Love this look? Get the flirty feminine style with these bachelorette pad essentials.