Share
Share
Sylvie Rochon's 1,000-square-foot apartment in an up-and-coming Montreal neighbourhod is like an art gallery of sorts. It's clear upon first glance that Sylvie has a passion for design and keen eye for spotting pieces that are intriguing and unique (like the oversized bulldog clip and the turquoise chandelier, both in the dining room). Evidence also lies in her vintage furniture shop, Spoutnik (French for "Sputnik"), which is chock full of iconic pieces, funky gems, and items from private sales. 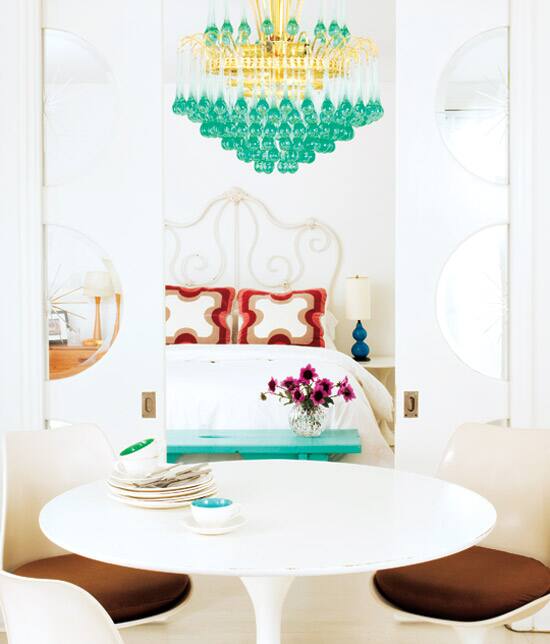 Building a beautiful boudoir
An early 1960s chandelier with plastic drops hangs over an Eero Saarinen pedestal table and chairs in the dining room. The pocket doors, which close off the bedroom area, were discovered in a Quebec City recycling centre. "I bought them six months before the renovation started," says homeowner Sylvie Rochon. "I knew I wanted them in my home, but just didn't know where." 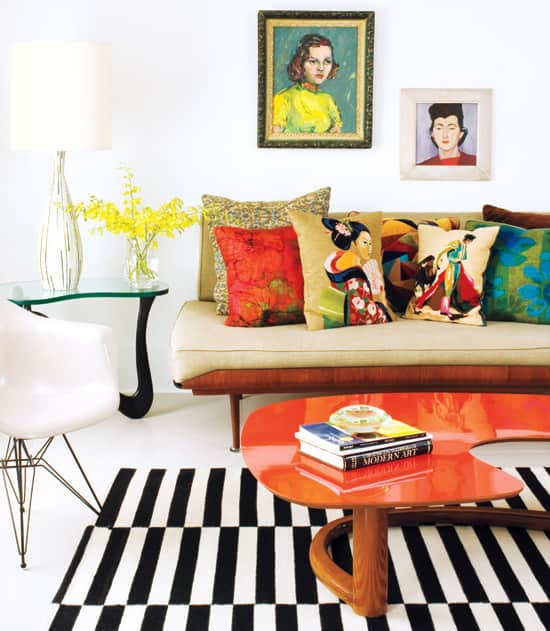 Arranging the room
Pierre-Yves Gagnon, the stylist for Sylvie's shop, often helps her arrange pieces in her own home. "He's much quicker at placing things together than I am," says Sylvie. In the living room, a Dar Eiffel chair is paired with a teak daybed. The low table is Montreal artist Guy Monteur's reinterpretation of a design produced by T. H. Robsjohn-Gibbings, a New York decorator famous in the 1940s and 1950s. 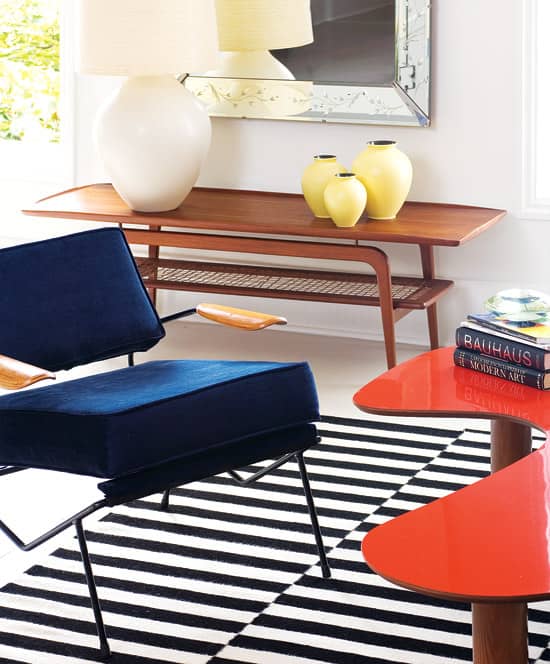 Tying the room together
Sylvie used the same white lampshade on various lamps to visually tie them together. A 1957 plywood-and-tubular-steel chair from the Dan Johnson studio is like a work of art. 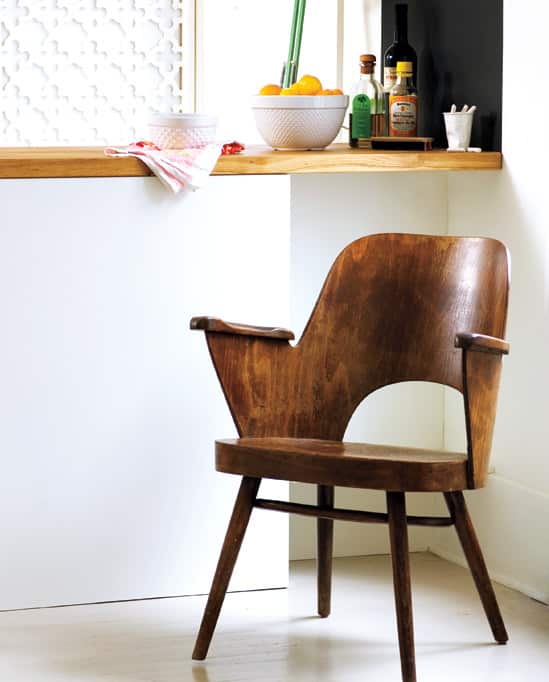 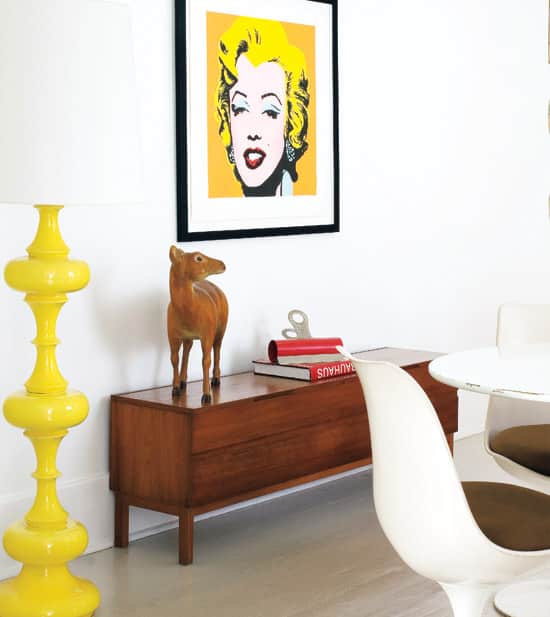 Let the colours pop
One of Sylvie's close friends gave her this Marilyn Monroe print originally made for a hotel in Belgium. Sylvie painted the walls a soft white to let the brightly coloured accessories and furnishings shine. The hardwood floors - a feature Sylvie really loves - were painted in a light grey. 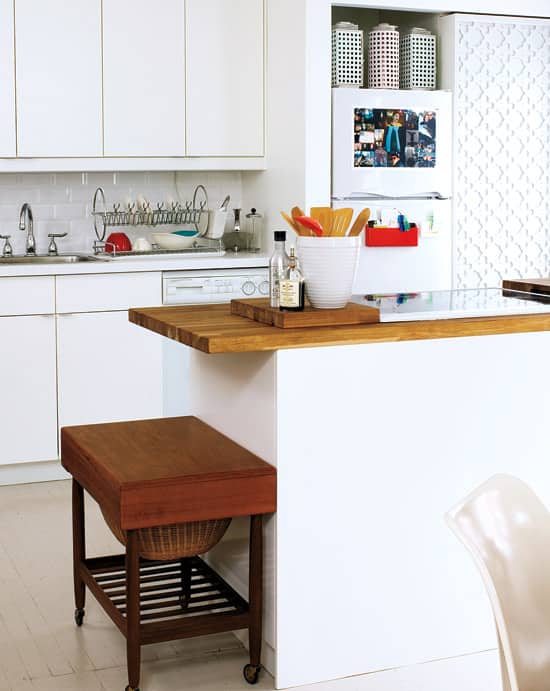 Add warmth with wood
Both the wooden countertop and the rolling stool with a storage basket hidden underneath add warmth to the all-white kitchen. 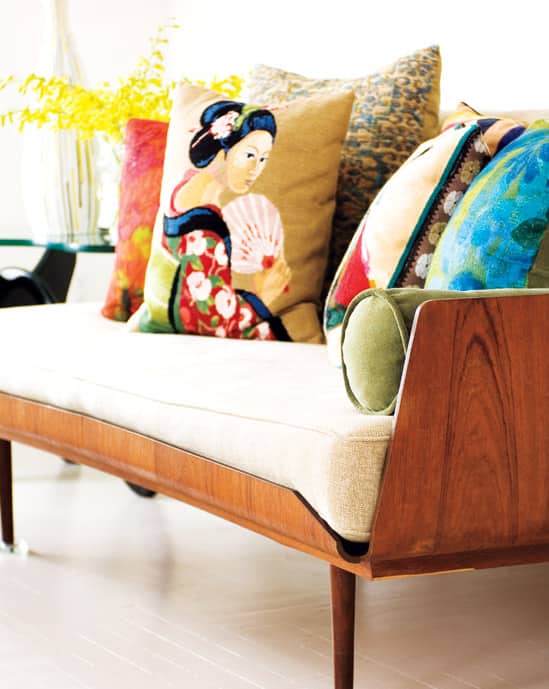 Colourful cushions
A grouping of cushions covered in colourful vintage fabric (the geisha and matador are actually needlepoints) pops against the neutral teak daybed and adds a cozy element. 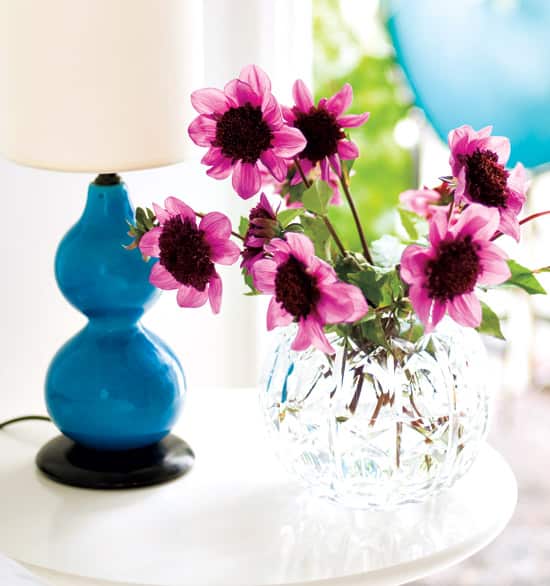 Fresh flowers
Sylvie prefers to accessorize with freahly cut flowers rather than objects.