Share
Share
It took about three minutes for me to decide to buy this place,” says homeowner and designer Laura Fisher. Living in Calgary at the time, Laura had become well acquainted with Nova Scotia while visiting her son at Dalhousie University in Halifax, and she thought it would be an ideal spot to own a family cottage. When she was in the province in October of 2007, she rented a car and drove around the area south of Lunenburg, armed with a list of 20 properties. “I think this was one of the last on the list, and as soon as I looked around I said, ‘This is it!’”

The distinctively modern structure – designed by architects from the United States and built by local builders four years earlier – stood high up on a forested, five-acre site and was immersed in nature on all sides. While it was the sense of privacy and the panoramic views – from a small pond to the vast expanse of ocean to meadows and rolling hills – that drew Laura to this property, she also saw potential in the cottage itself. “It had a good feeling,” she says. 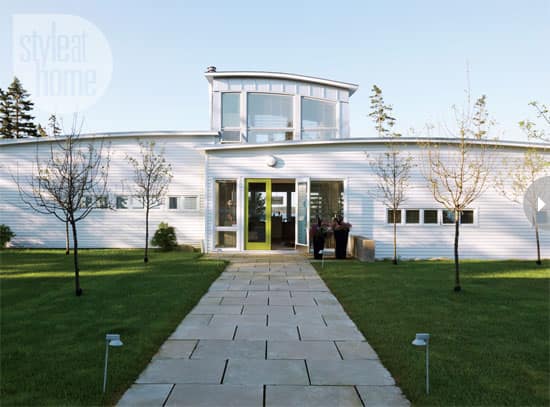 Family cottage
Even though the interior design had a makeshift quality with a few big box furnishings placed here and there, its open-concept spaces and arched ceilings – 15 feet at the highest point and 12 at the lowest – gave the house a sense of airy grandness. Its layout also appealed to Laura, with features like the master bedroom suite tucked away on one end.

But still, the cottage’s architecturally bold look needed to be “hushed,” so Laura enlisted architect Diana Carl to help her create the refined aesthetic she desired. “We really wanted to soften the form,” says Diana. “It has very distinct lines and was quite busy, so inside what we aimed to do was respect the large open space but really quiet it down and turn it toward the water.”

“The loft is clad in aluminum siding to go along with the windows,” says Diana. And it’s also the one beacon on the building: From the water, it looks like a silver box connected to two white wings. 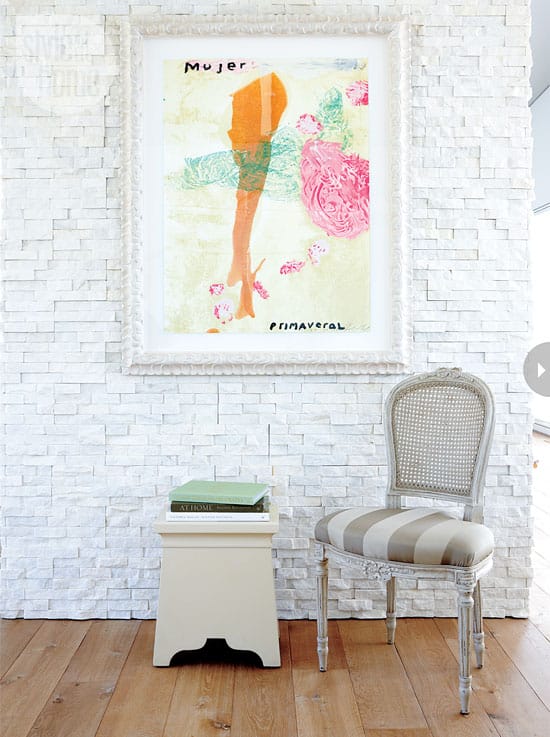 Entryway
The back of the quartz fireplace provides a textural focal point in the welcoming entryway and lends visual interest among the cottage’s muted neutral tones. 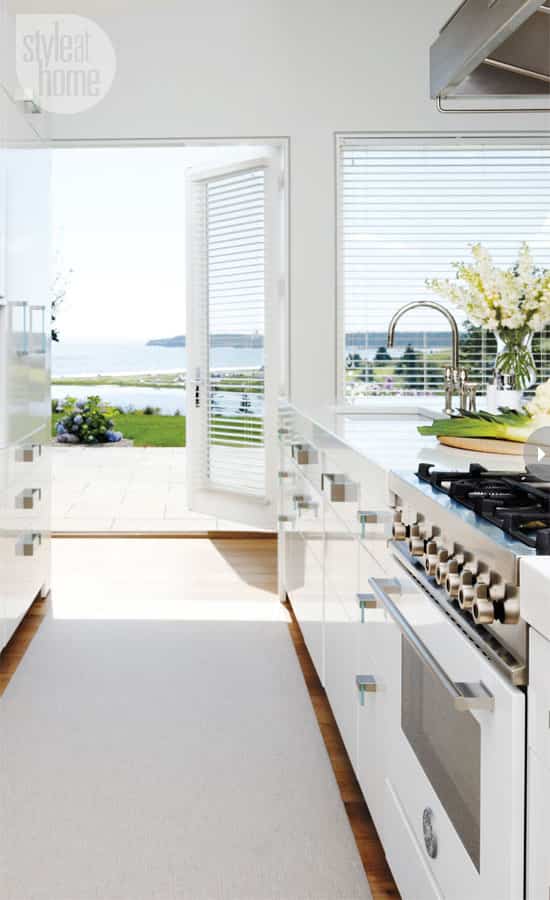 White kitchen interior
The kitchen’s white lacquered kitchen cabinetry is punctuated with prominent frosted-glass-and-nickel hardware, which evokes the look of sea glass. A glass-panelled door leads to a sandstone-covered terrace. “We felt the sandstone complemented the weathered hardwood floors on the inside,” says Diana.

To create a seamless feel in the cottage, a limited selection of materials was used. For instance, the white quartz on the kitchen countertops was also used on the stairs. 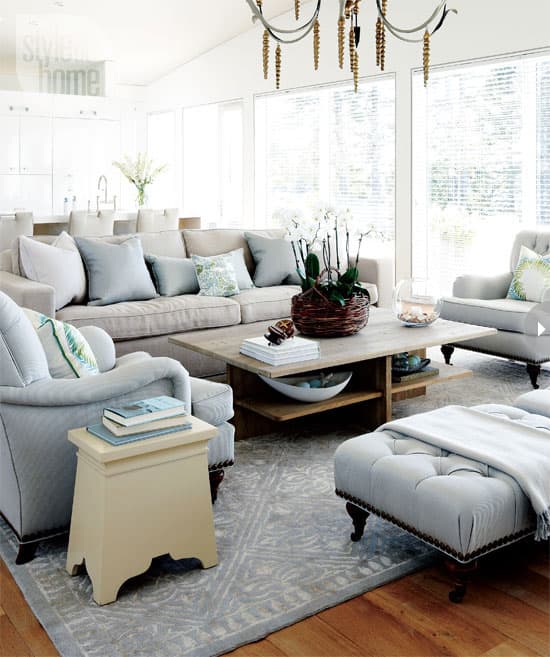 Living area
The living area’s muted palette of white, grey and steely blue enhances the cottage’s relaxed, elegant style, and the oak floors suit the coastal casual setting with their light wood tone reminiscent of driftwood. This side of the cottage faces the water and features new, larger windows that go all the way to the ground to connect the modern cottage interior to its spectacular surroundings. 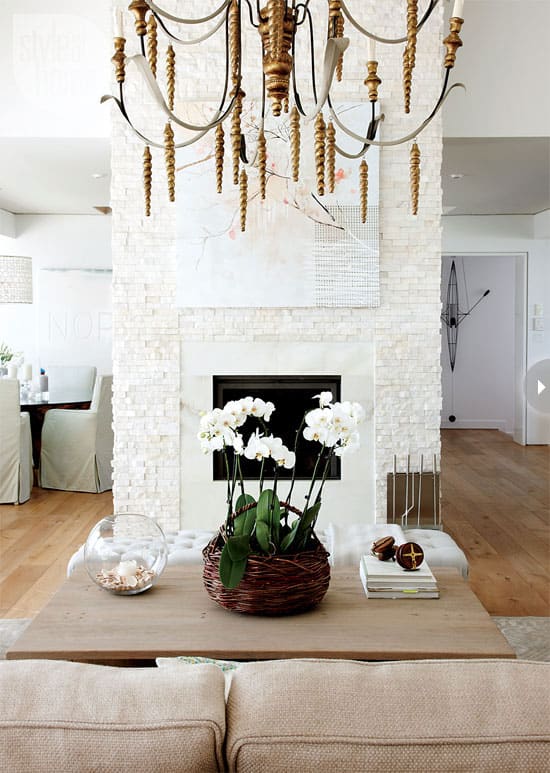 Fireplace
Covered in split-faced quartz, the massive fireplace serves as a strong architectural feature that demarcates the entryway and living and dining rooms in the open-concept space. 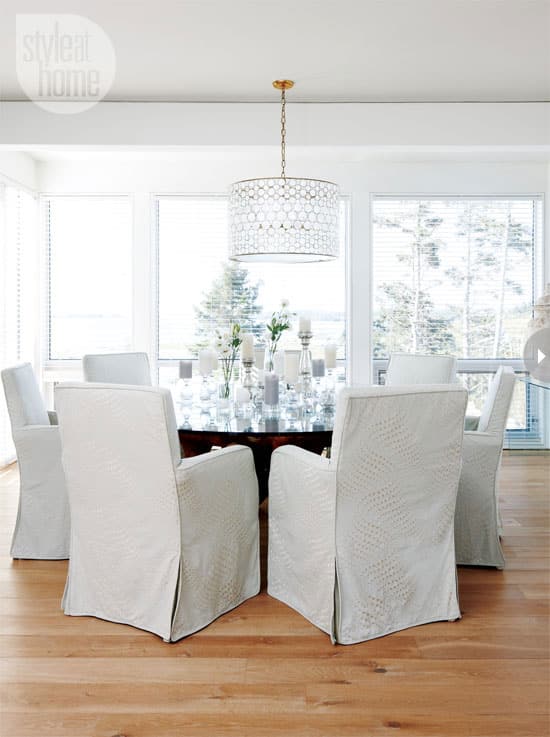 Dining area
“The dining nook juts out further from the rest of the house,” says Laura. In this dining area, casual slipcovered dining chairs surround a table made from a giant teak root topped with glass. The capiz drum light fixture complements the cottage’s beach style vibe. 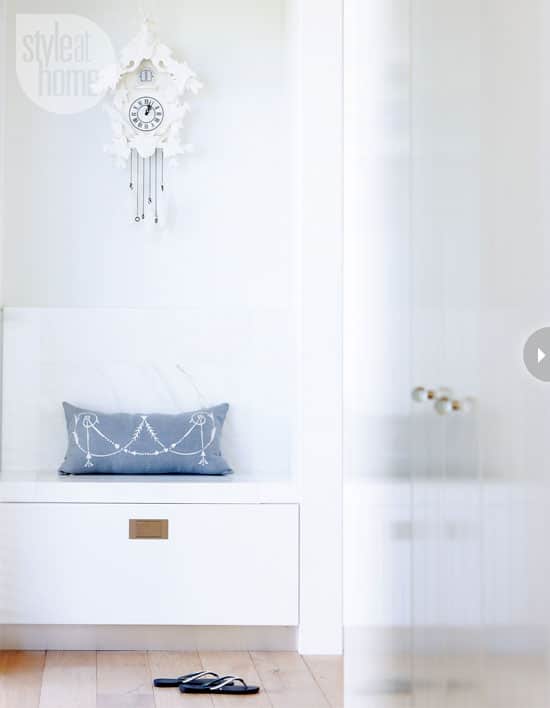 Mud room
A mud room offering extra closets and a storage bench is located in the breezeway that ties the guest cottage to the main house. 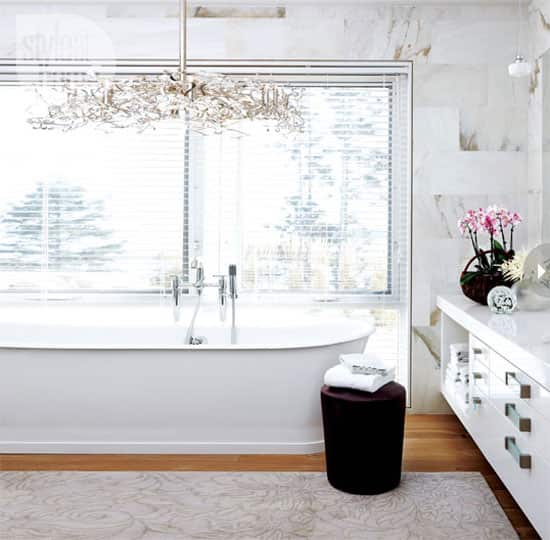 Master bathroom
Calacatta marble tiles cover the walls in the master bathroom, giving the room a decidedly warm and luxurious retreat look. The statement chandelier is a sculptural element that anchors the tub and offsets the space’s clean lines. 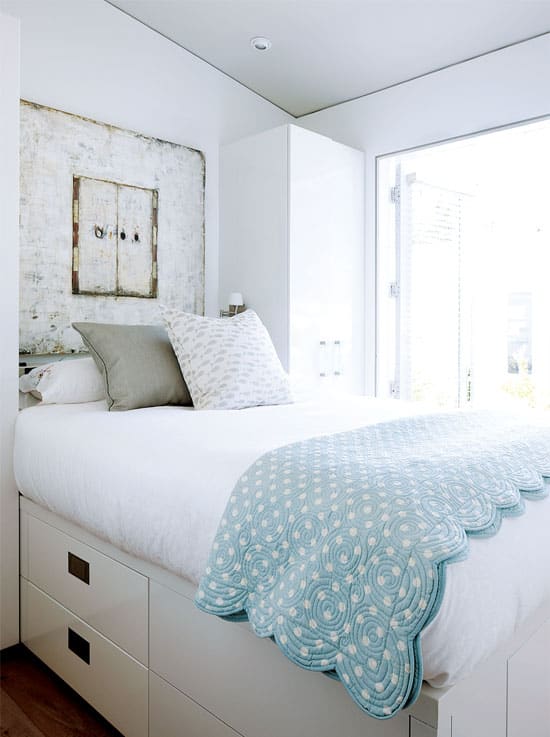 Guest bedroom
In the guest bedroom, which boasts its own private terrace, a custom captain’s bed tucked in between two built-in cabinets makes good use of the small space.

Want to get that playful, summer look? Here are 11 ways to get carefree cottage style.