Share
Share
When a member of Vancouver designer Negar Reihani's extended family, a young dentist, hired her to decorate her new condo, she gave the designer almost a free hand, but with just one strict rule: because any structural alterations would require the approval of the condo board and major red tape, Negar had to work with what was there. 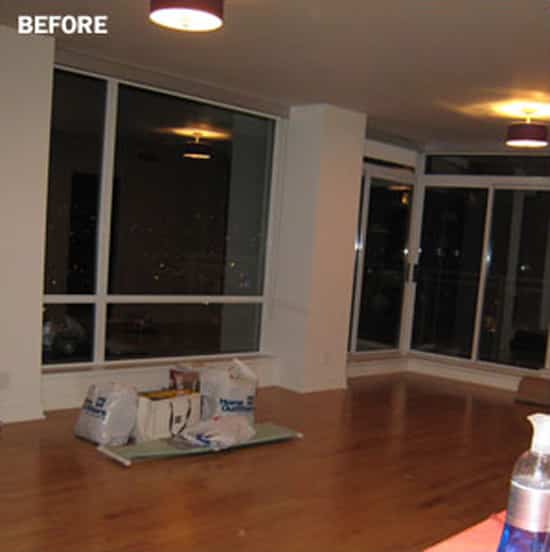 Before As with many standard urban condos, the place had almost no character, bland, neutral finishes and there were awkwardly placed outlets. Her highly creative response is full of adaptable ideas for addressing some common condo dilemmas. 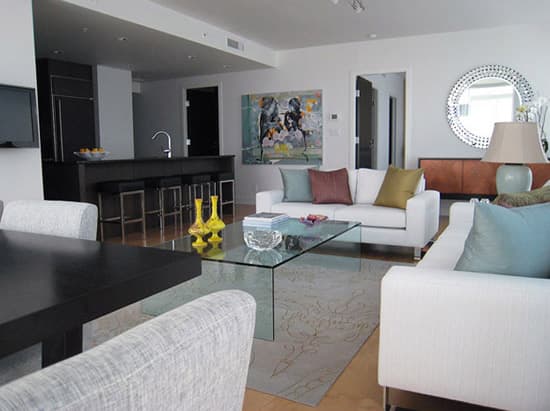 The inspiration Negar often starts with a great painting to set the design in motion. A swirling abstract by Caroline Guille of blues, creams, browns and blacks, which now hangs on the wall of the living room, inspired a soothing colour scheme that contrasts soft elements such as natural linen, wool and silk, with gleaming crystal, mirror and glass, to keep things light but grounded. 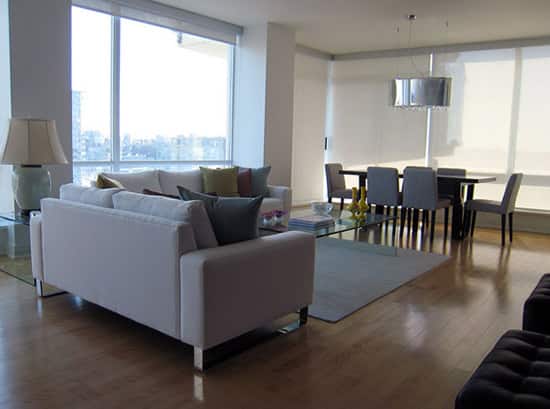 Living/dining room views The builder's layout placed the dining room next to the kitchen and the living area at the far end of the space. There were several problems with this arrangement, among them that the best views would be hidden behind the seating. Switching the two centres the great view between both areas, and places the main seating near the kitchen, where guests can chat with the cook before dinner. 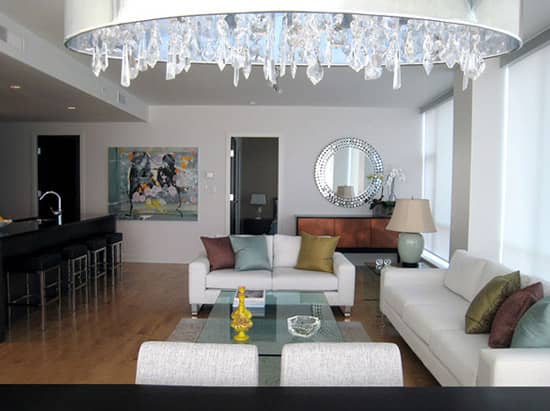 Sparkle and balance A bright stainless steel and crystal chandelier adds sparkle over the dining table, and creates a visual balance with the round, cut-glass-bordered mirror across the room. The credenza beneath the mirror, from Crate and Barrel, was a real find: its hammered-copper doorfronts add another layer of sheen and colour, while the combination of the mirror and a subtle swirl pattern in the copper finish contrast with the straight angles both in the room and in the urban view outside. 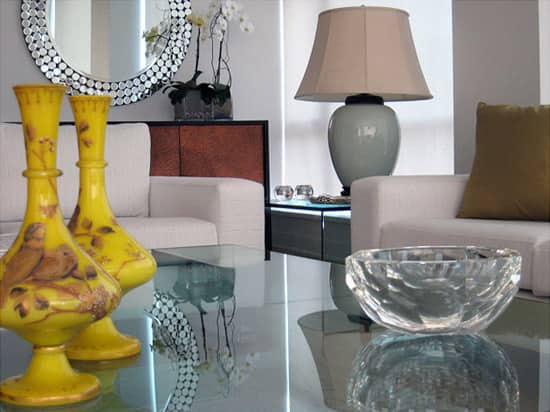 Beautiful and bright accents The homeowner's treasured antique French porcelain vases play up another of the contrasts in the scheme, between traditional and contemporary. Their bright colour also happens to perfectly echo the touches of yellow in the painting that inspired the overall design. 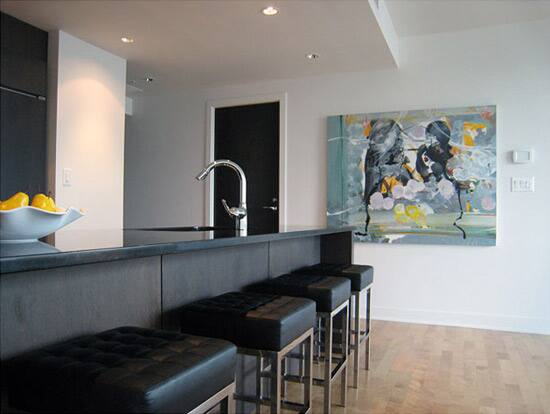 Extra seating Placing black leather-covered stools along the counter serves a double purpose: the dark colour blends in with the outer wall of the kitchen, while adding both extra seating and another interesting texture. 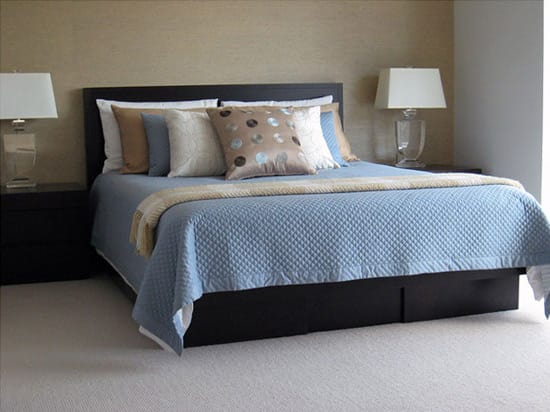 Master bedroom The texture and soft natural tones of grasscloth wallpaper centres the master bedroom without overpowering it. Negar points out that the crystal lamp bases act like magnifying glasses to highlight the nubbly surface of the grasscloth, while a variation on the main space's colour scheme of blue, cream, taupe and deep brown, helps the whole condo feel pulled-together. Since built-ins were not an option, drawers in the base of the bed provide needed extra storage. 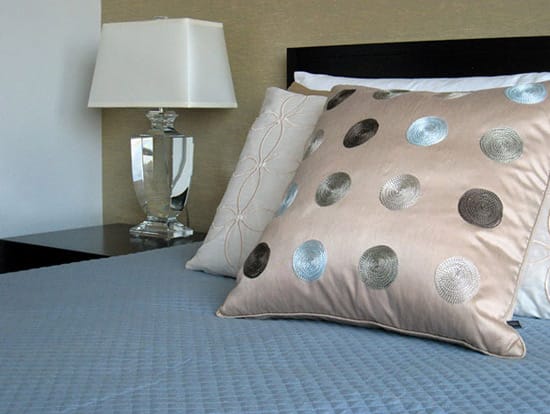 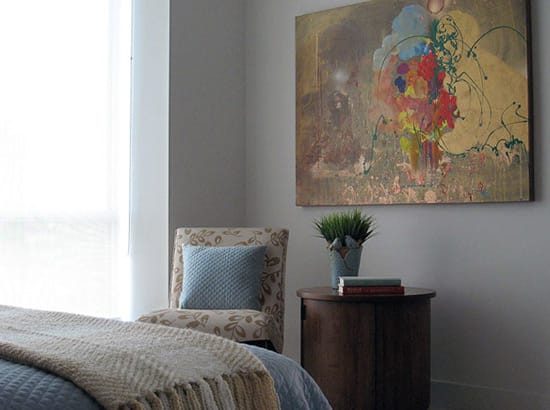 Bedroom artwork Another Caroline Guille abstract, this one in soft golds, creams, green and a splash of clear red, picks up the gold tones of the grasscloth wallpaper directly opposite, while a tiny, light-blue-painted pot of fescue grass picks up the blue and green tones. 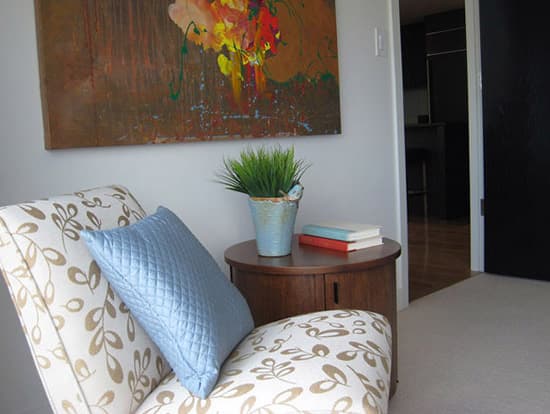 Accent furniture Negar loves Danish modern furniture for its practicality and beauty. The round chest holds an astonishing amount of storage within its four cupboard doors, including a laptop and household papers. The owner was at first a bit nervous about the leafy gold-and-cream chair fabric, until she saw how perfectly it fit with the painting and the subtle colours and shapes in the room. 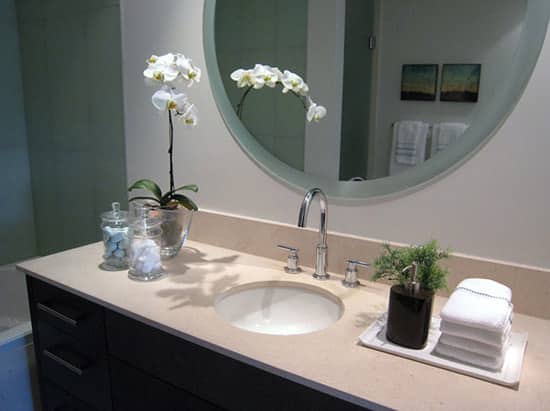 Master ensuite Each of the condo's two bathrooms posed special challenges, since Negar had to work with the builder's finishes that were already there. In the master ensuite, artwork again sets the stage: a diptych by Salt Springs Island artist David Graff adds a touch of blue to the cream and brown palette, and (since the work is painted on glass) is practical in a bathroom. For the counter, the simple addition of a composition of high and low elements adds personality to the quiet space. 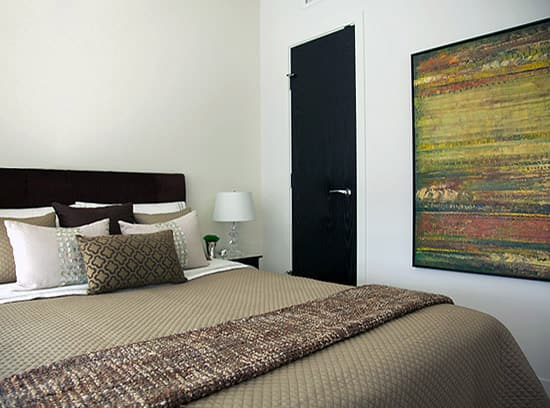 Guest bedroom In contrast to the master, the condo's second bedroom is miniscule, so a monochromatic colour scheme brightened by crystal and mirror pulls it together. The wallcovering is actually vinyl with a pearly tone-on-tone pattern; vinyl, says Negar, is a cost-effective alternative to wallpaper that nowadays offers a wealth of interesting and beautiful options. The painting is by Negar herself, given to the owner as a housewarming present. 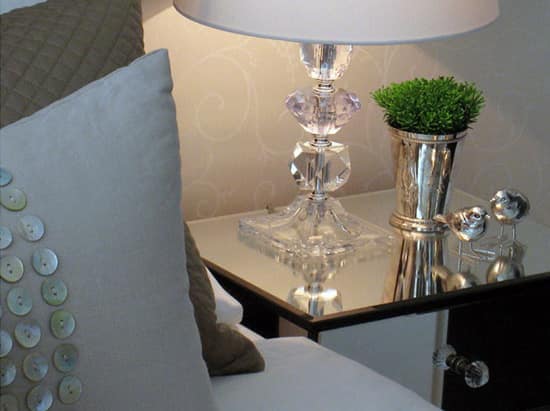 Sparkling accents Mirrored side tables, crystal lamps topped with soft white linen shades, and a pair of silver birds next to a tiny patch of greenery in a silver vase, brighten the tiny guest room. Even the bed linens, in quilted gold and highlighted by pillows with tiny nacre buttons, add a touch of luxury. 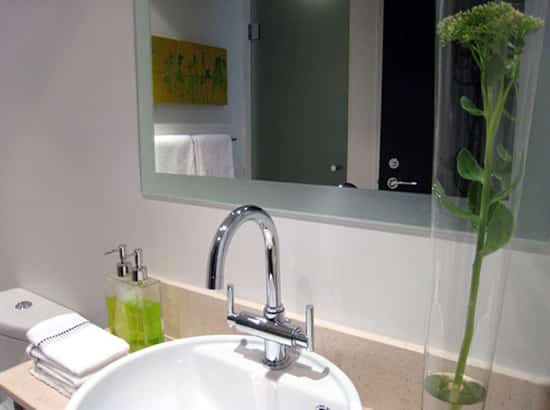 Guest ensuite Another Caroline Guille canvas inspires Negar's choice of yellow-green accents to jazz up the neutral-toned ensuite: a tall glass vase that the homeowner can use to enclose a single stem as here, or fill with pebbles or taller flowers to freshen up the look. Accessories in white, green, silver and glass lend an air of clean, spare elegance.