A dated bathroom receives a modern makeover that pays homage to its 1920s beginnings.

When Style at Home’s editorial director Erin McLaughlin decided to renovate her stepdaughter Emma Peckham’s 70-square-foot bathroom, it was only natural that Erin called on designer and Style at Home contributing design editor Stacy Begg for some help. Stacy’s mission? To bring the glam-style bathroom — last renovated in the 1980s — into the 21st century, while honouring the home’s 1920s character. She provided an update that included a soft muted palette, contrasting textures and a few modern elements. “All I remember about the original bathroom was it being overwhelmingly pink with lots of mirrors,” says the designer with a laugh. “I’ve tried to erase it from my memory!”

Though the walls and flooring were bound for a total overhaul, the original enamelled cast iron bathtub stayed put. “The whole design was actually hinged on the tub,” says Stacy. It’s the only piece that tied the look back to the home’s 100-year history. With that in mind, the designer chose finishes that were contemporary enough to give the room a clean-lined, subtly feminine aesthetic while respecting its traditional origin. Here’s how she completed her mission. 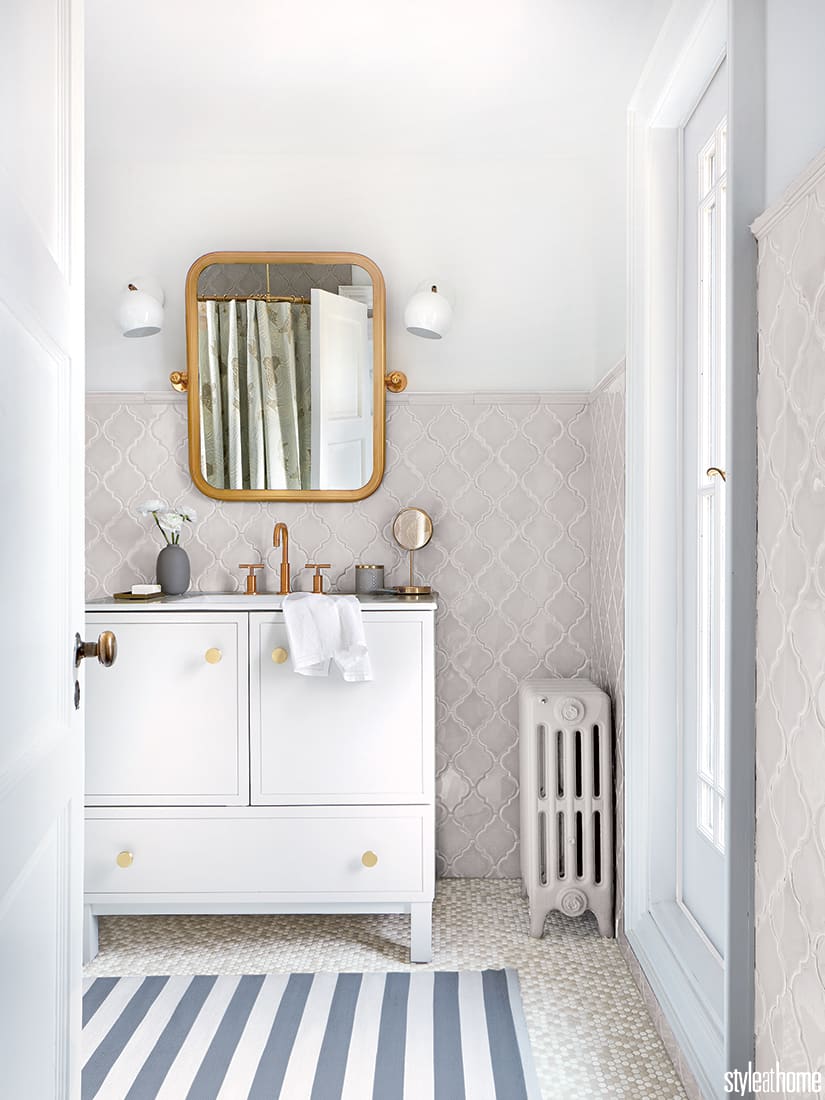 Renovated by the previous homeowner in the 1980s, the retro-glam bathroom was dated, to say the least. Designer Stacy Begg decided to tone down its flashy features with a subdued palette of greys and whites. 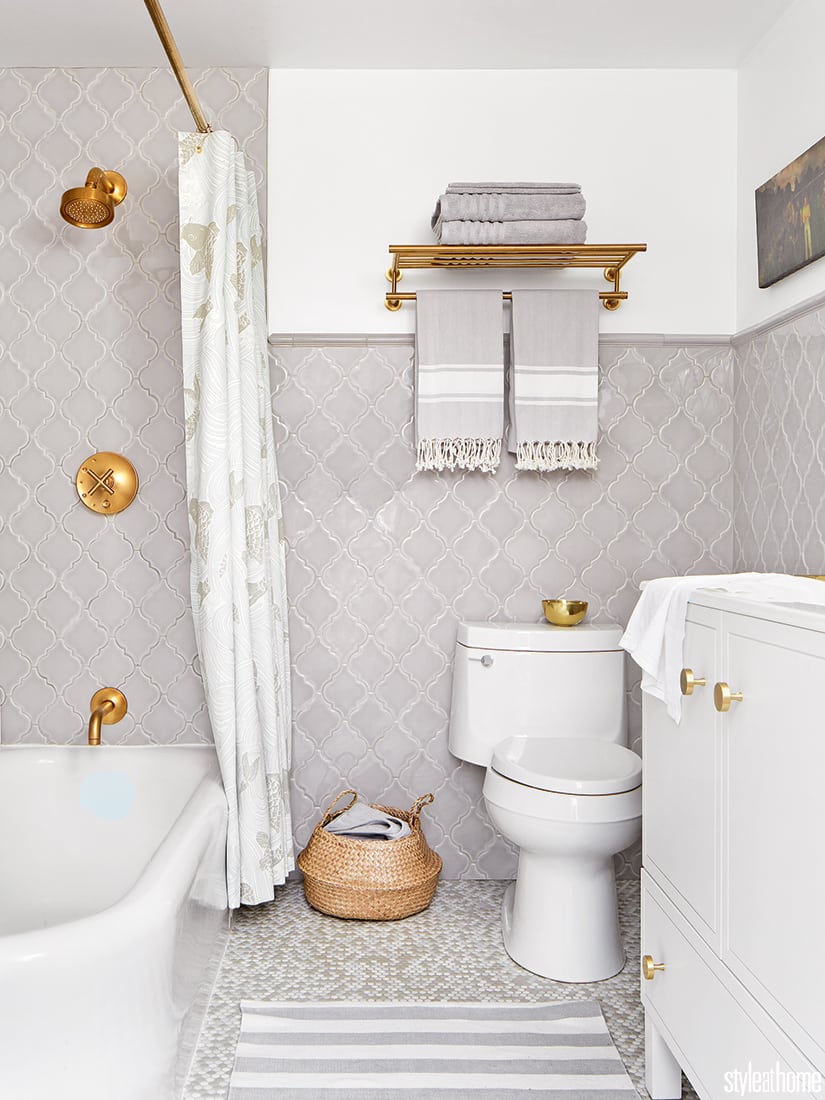 This bathroom exudes the serenity of a traditional Turkish bath, thanks to some worldly accessories. Arabesque-style handmade ceramic wall tiles call to mind faraway lands and create a simple elegant envelope, while hammam towels and a belly basket continue the exotic feel and add a hint of bohemian inspiration to the mix.

The shower curtain sports a large-scale yet muted koi print. The fish, symbolizing courage and strength, serve as daily encouragement. 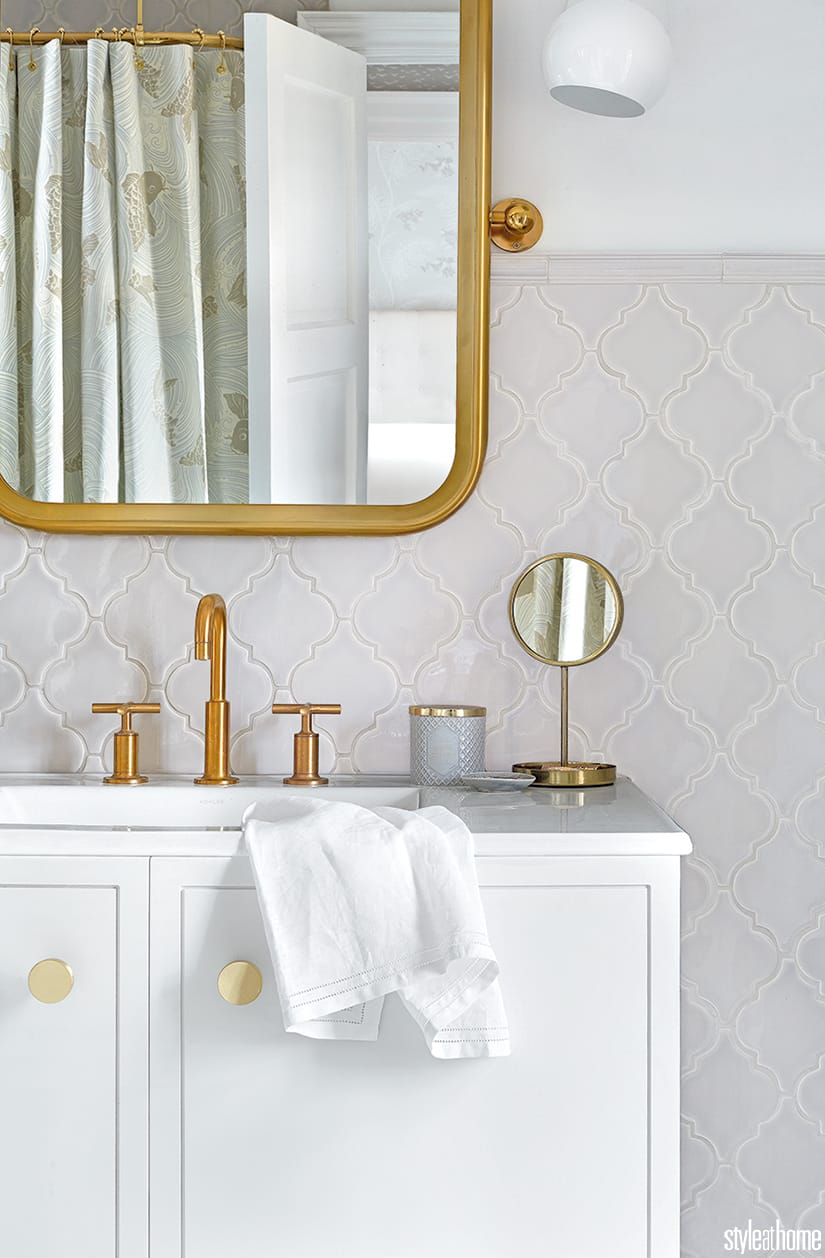 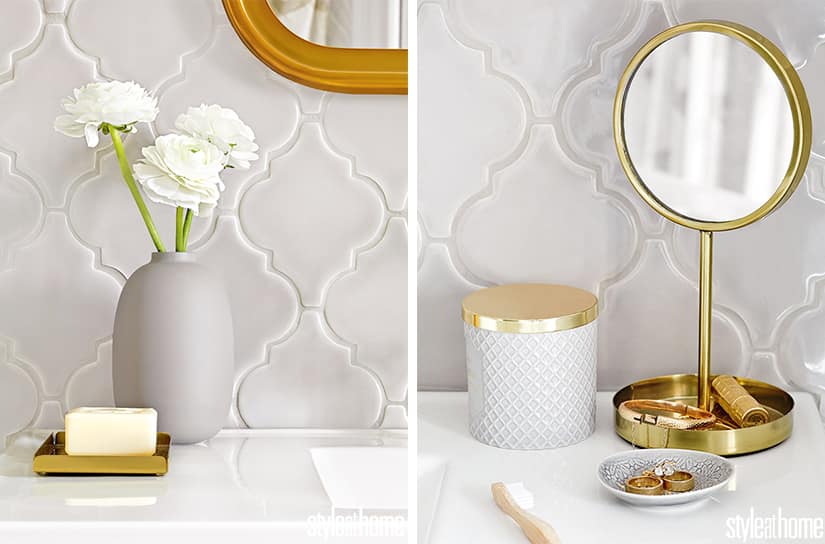 The designer chose brass fixtures to create a warm contrast to the room’s cool grey tones. Adding pops of the glowing metal makes a strong statement and is a nod to the luxe materials popular during the prosperous 1920s.

Though the room’s colour scheme is neutral, it’s imbued with pattern from top to bottom: The floor tiles offer an ersatz mosaic, while the stylish stripes on the bath mat are large and playful. Combined with the flowing pattern on the shower curtain, the curvy lines of the wall tiles, the stunning brass fixtures and the sleek white vanity, these elements provide ample visual interest.