A luxurious bathroom gets refreshed with both modern and classic touches that perfectly suit its owner’s evolving style.

If you think you’ve seen this bathroom before, you’re right – only it didn’t look quite like this. If you were to take a trip down Style at Home’s memory lane, you’d see a fabulous refined makeover of our editorial director Erin McLaughlin’s ensuite, which was featured in our September 2011 issue. But since then, Erin’s style has evolved (whose wouldn’t after eight years?), and the previous pale lavender incarnation of this room, with its chinoiserie fabric and traditional wainscotting, no longer felt as though it reflected Erin’s personality. So when a burst frozen pipe destroyed the majority of the tile work, she decided to turn misfortune into opportunity and give the space an update. She wanted an aesthetic with fewer frills and more fun, with a subtle palette, dramatic punches, classic finishes and a few unique elements – and this was her moment. Here’s how Erin took her bathroom from major mess to masterpiece. 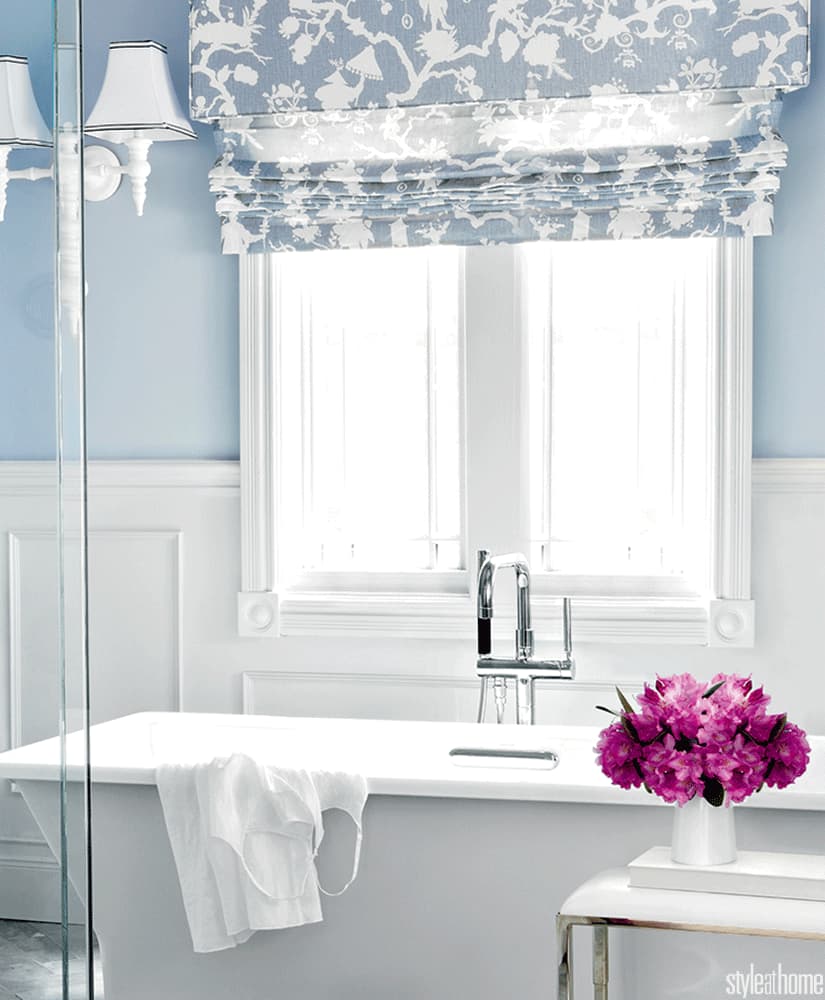 The luxurious freestanding bathtub wasn’t going anywhere in this reno – it’s one of the owner’s favourite pieces. 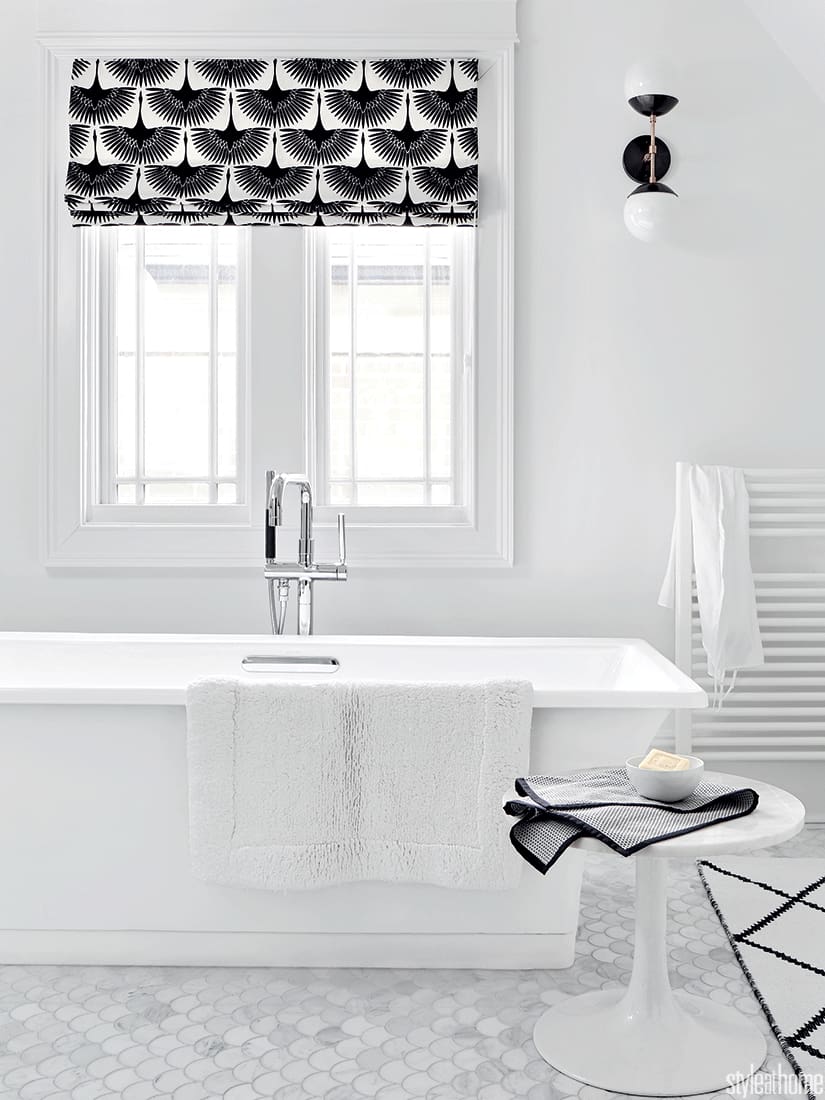 Style at Home editorial director Erin McLaughlin removed an upholstered pelmet that was covering mediocre moulding above the window. She then replaced the trim work with a classic architrave to create the illusion of a taller window. Combined with a graphic Roman shade and modern sconces in black, white and brass tones, the room now feels open, sleek and a little edgy. 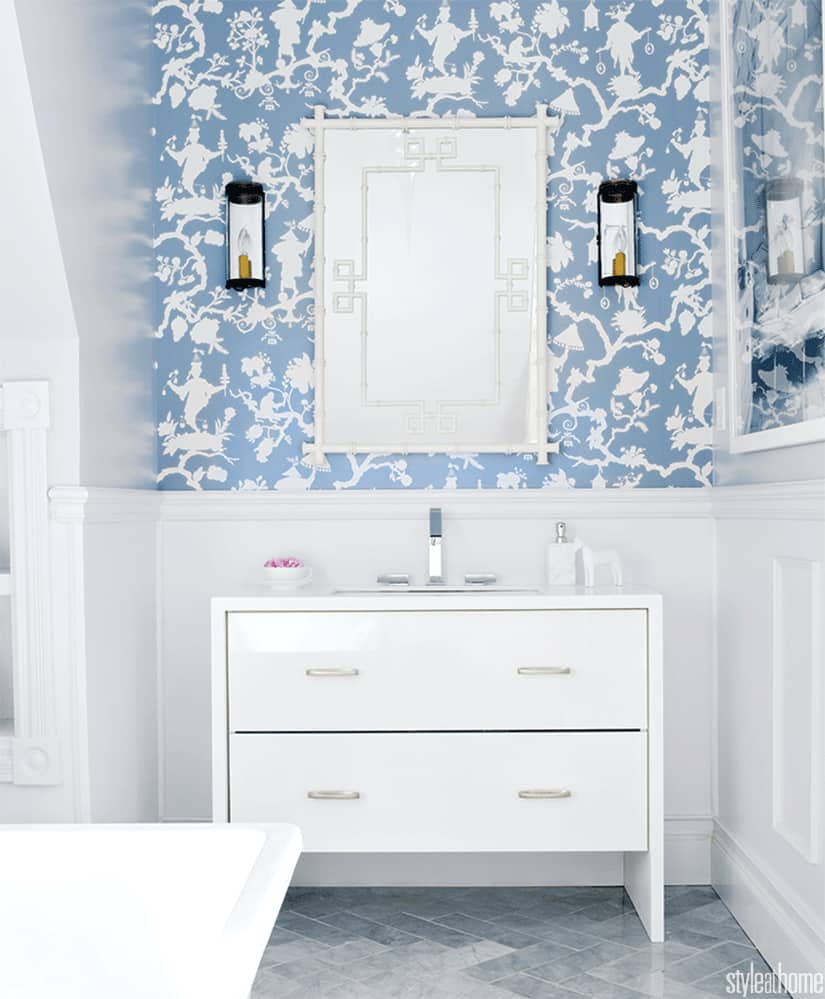 Erin traded in her big box-store vanity for a custom-made one and had it painted a refined light grey hue. 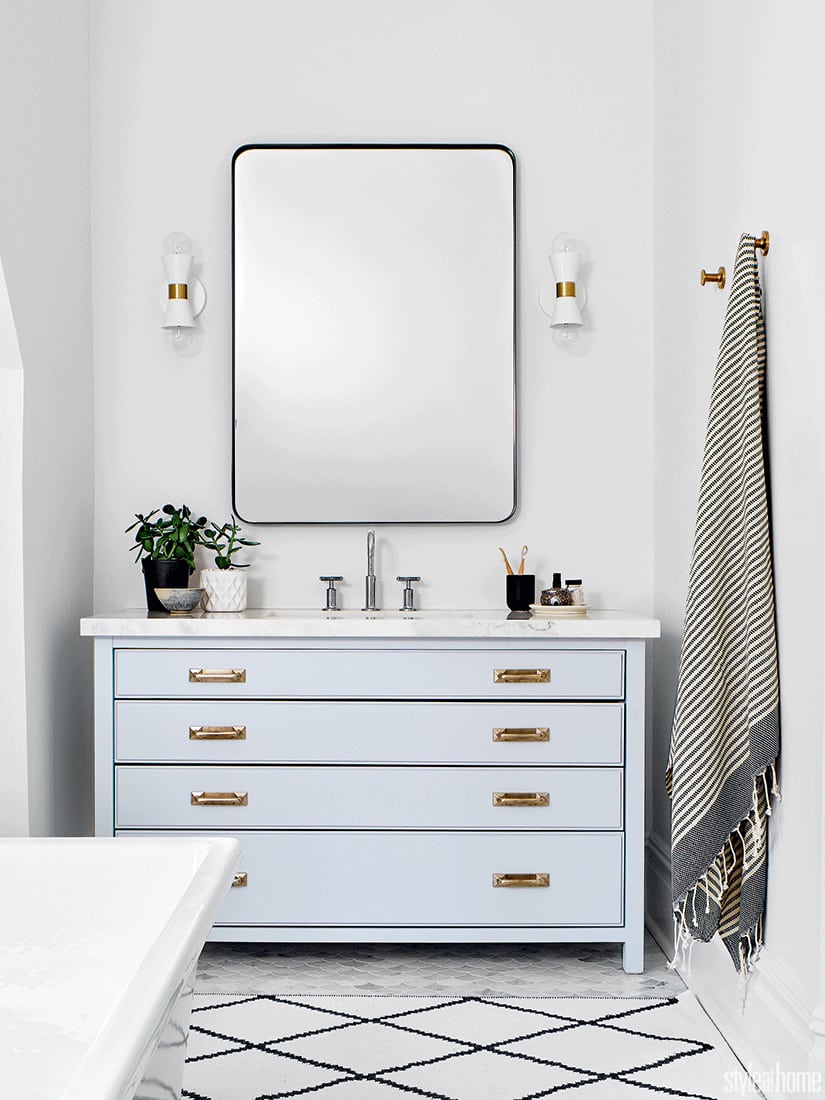 A custom-made vanity equipped with four drawers is perfect for storing bathroom essentials. the spacious countertop is chic and durable, allowing room to display a few daily-use items. Drawer pulls in brushed bronze bring the whole look together with simple sophistication. 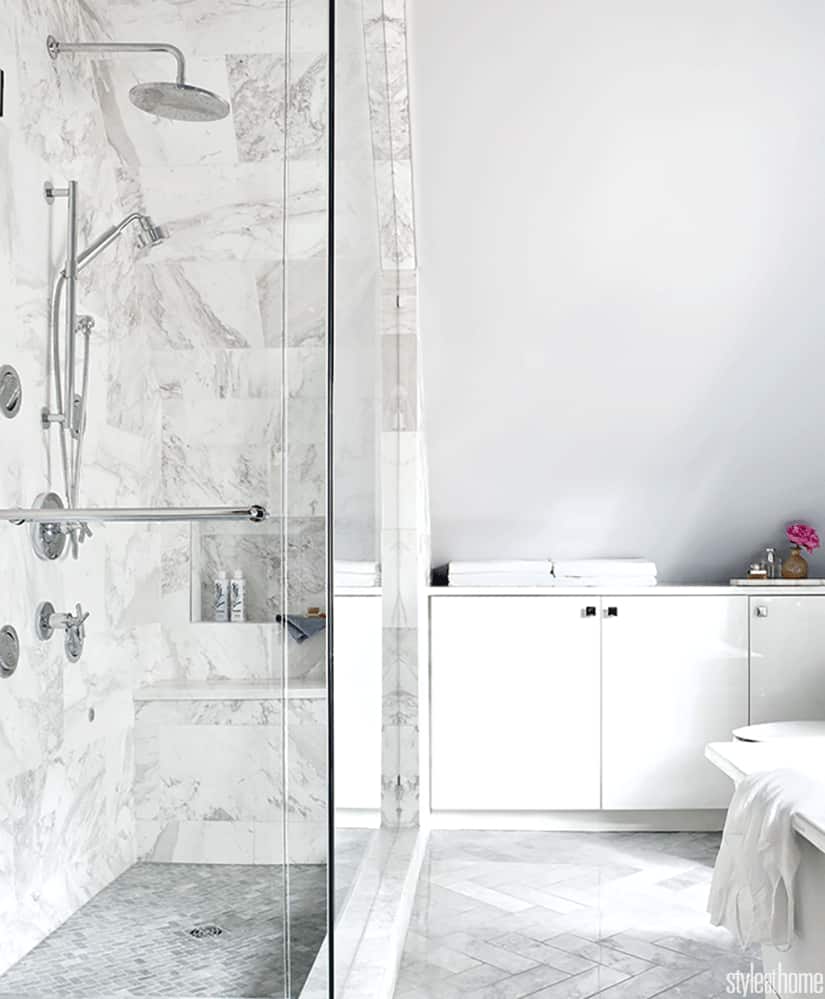 The shower tiles were replaced, but Erin kept the same deluxe fixtures and glass enclosure. 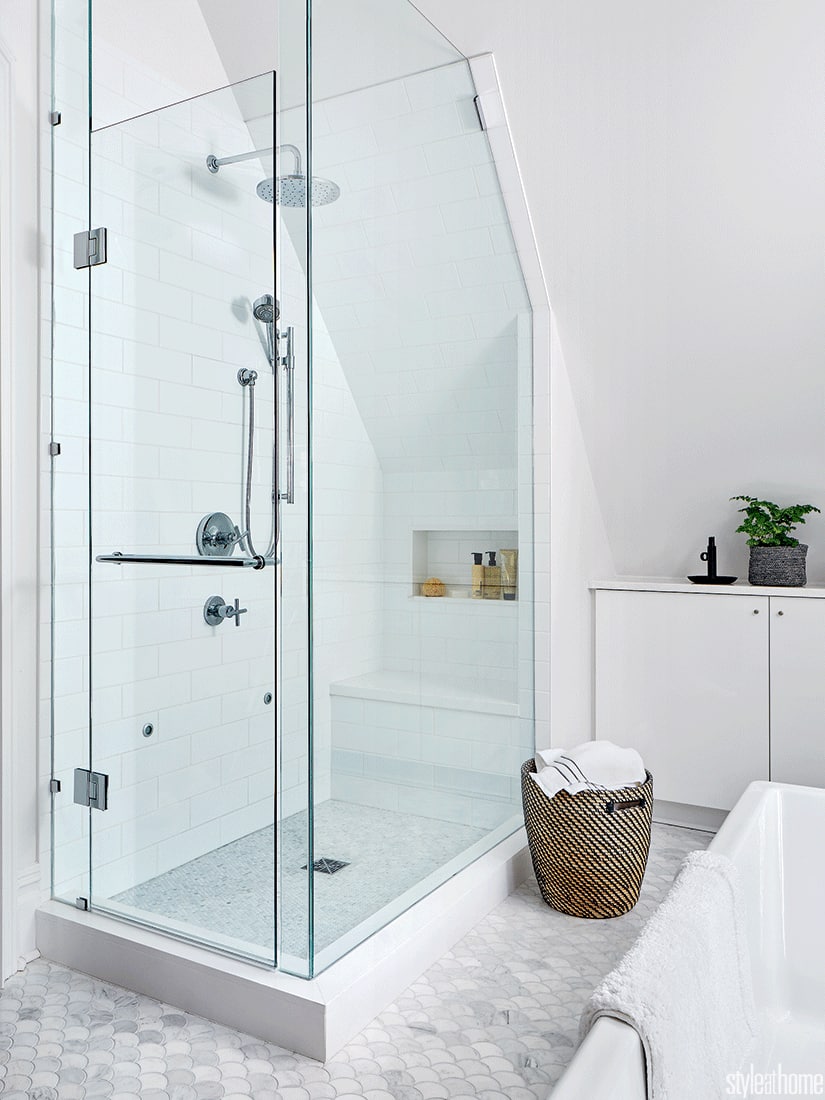 Though her style is quite simple, Erin loves including one unique feature in every room. The flooring in this ensuite is a case in point. Shaped like fish scales, the marble tiles are simply show-stopping. The shower walls were redone in an easy-to-clean large white subway tile, giving it a light and minimalist aesthetic with calming appeal. The clear glass enclosure imbues the room with an open and airy feel. 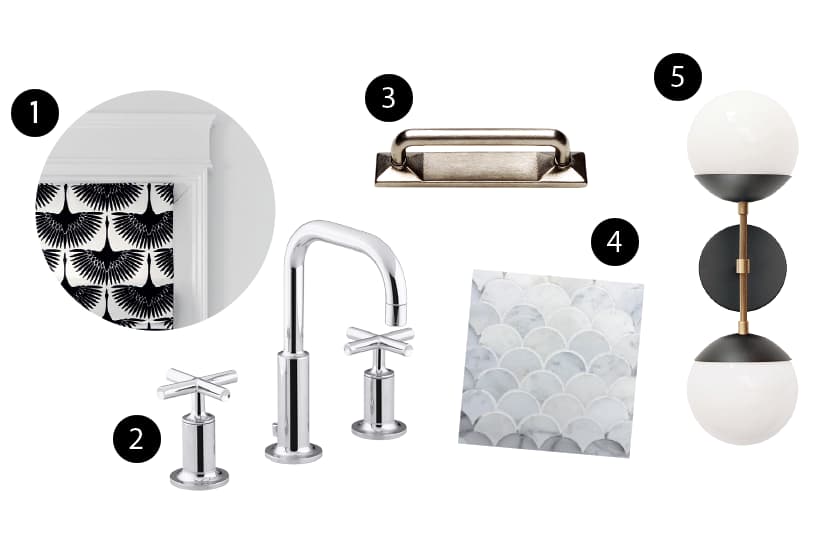 In this Toronto ensuite, designer Shirley Meisels creates an elegant escape with a clever combination of materials.