This love story, starring a family and the house of their dreams, has a standing-ovation-worthy ending.


Like most love stories, this one includes a chance encounter, years of yearning and – spoiler alert! – an eventual reunion. But before we reveal the happy ending, let’s rewind to the mid-’90s, when Quentin and Linda Adrian used to walk past an early 1900s Craftsman home in their Vancouver neighbourhood of Kitsilano. The couple was smitten with the five-bedroom, three-bathroom charmer, but at the time, it wasn’t meant to be. “We thought we could never dream of owning it,” recalls Linda.

Fast-forward to 2013, when the Adrians were looking to move into a bigger space that would accommodate their family, which includes their 14-year-old daughter, Isabella, and dogs, Loulou and Cedric. As they began their real-estate search, there it was: the same shingled house they’d loved years ago. “We were thrilled to be able to buy it,” says Linda. “It’s located in an area full of character homes that’s close to the beach.”

It turned out that the 2,700-square-foot house hadn’t been renovated since the days when the couple used to stroll past it. They were challenged to refresh the space, with its small dark outdated kitchen and mish­ mash of flooring throughout, from terracotta tiles to carpeting to wood. “The interior was a little busy – we didn’t know where to look,” says Linda.

The family lived in the house for one year before hiring Carrie McCarthy of Carrie McCarthy Studio and Tanja Hinder of Marrimor Studio. The designers were tasked with unifying the interior – minus a few walls here and there – and making it the Adrians’ own. “The new look is timeless glamour,” says Carrie. “We added strength and boldness, as well as some sparkle.” 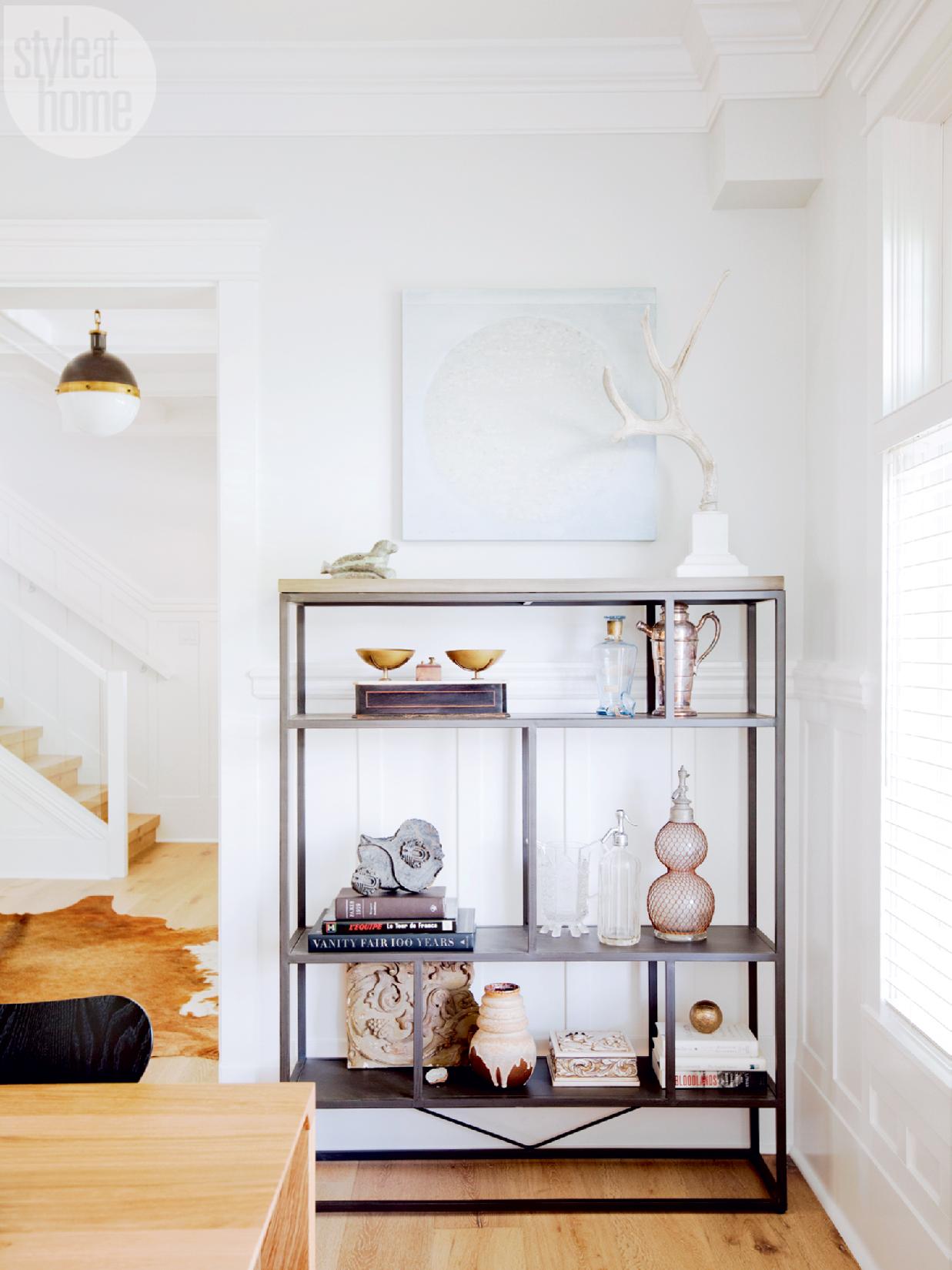 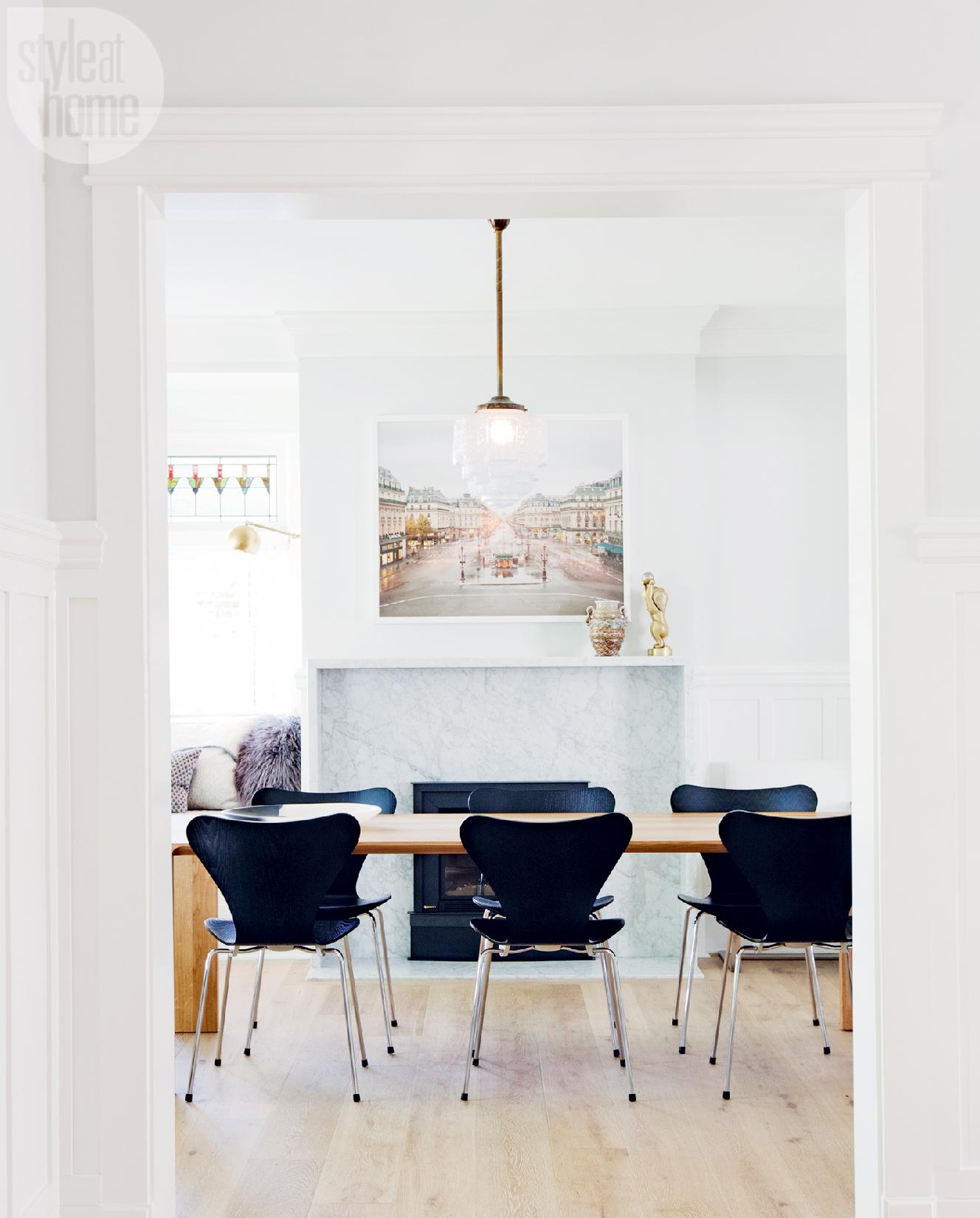 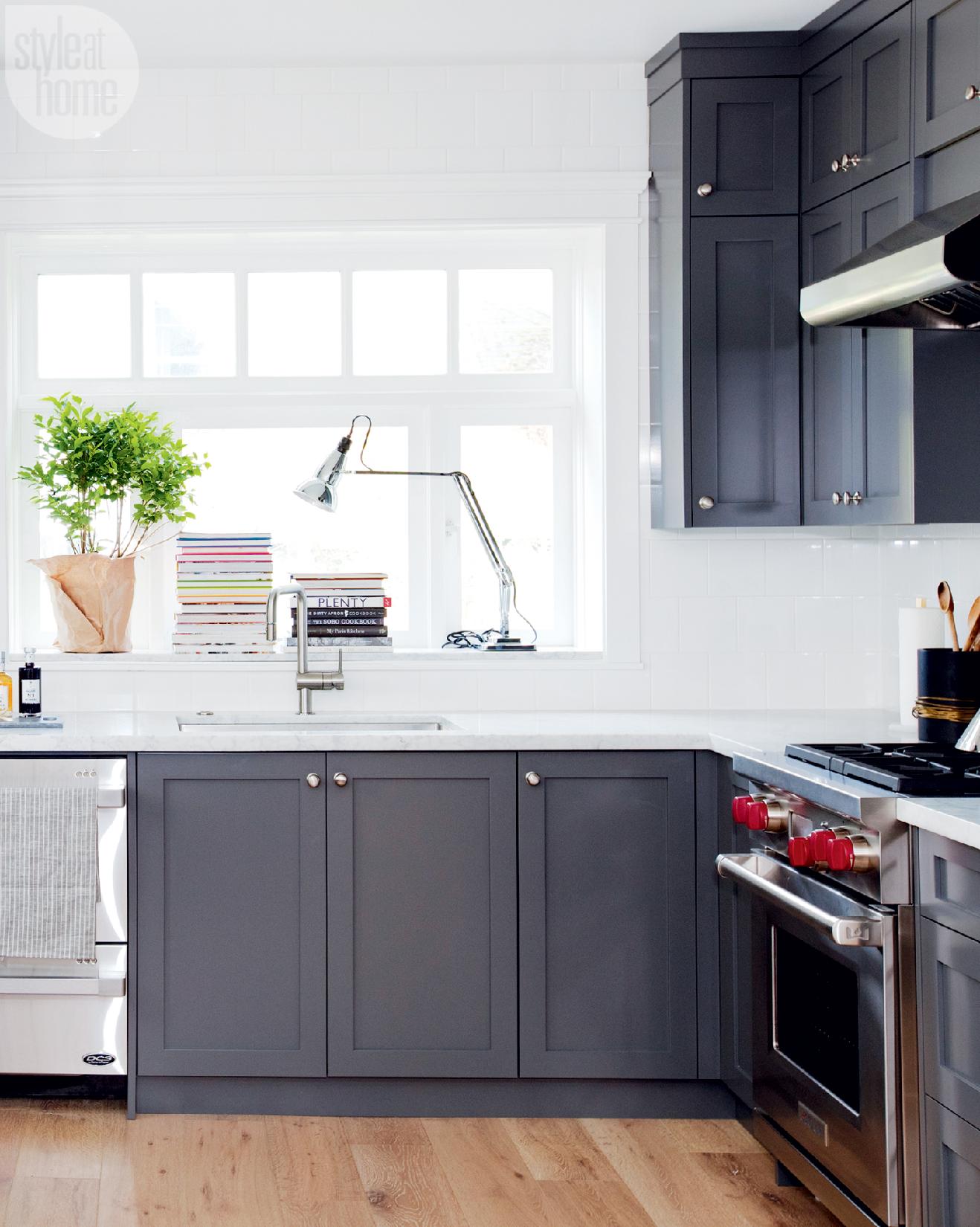 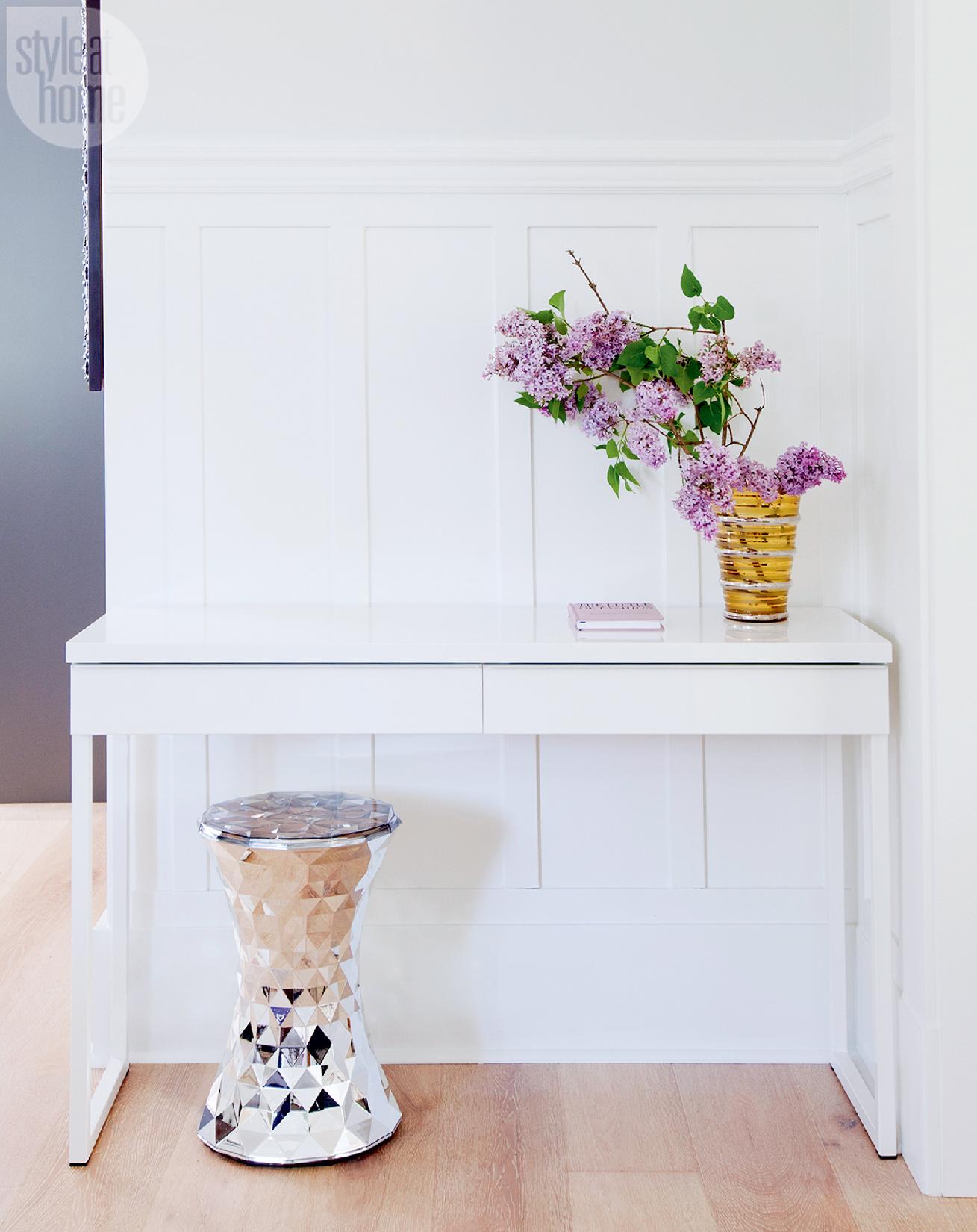 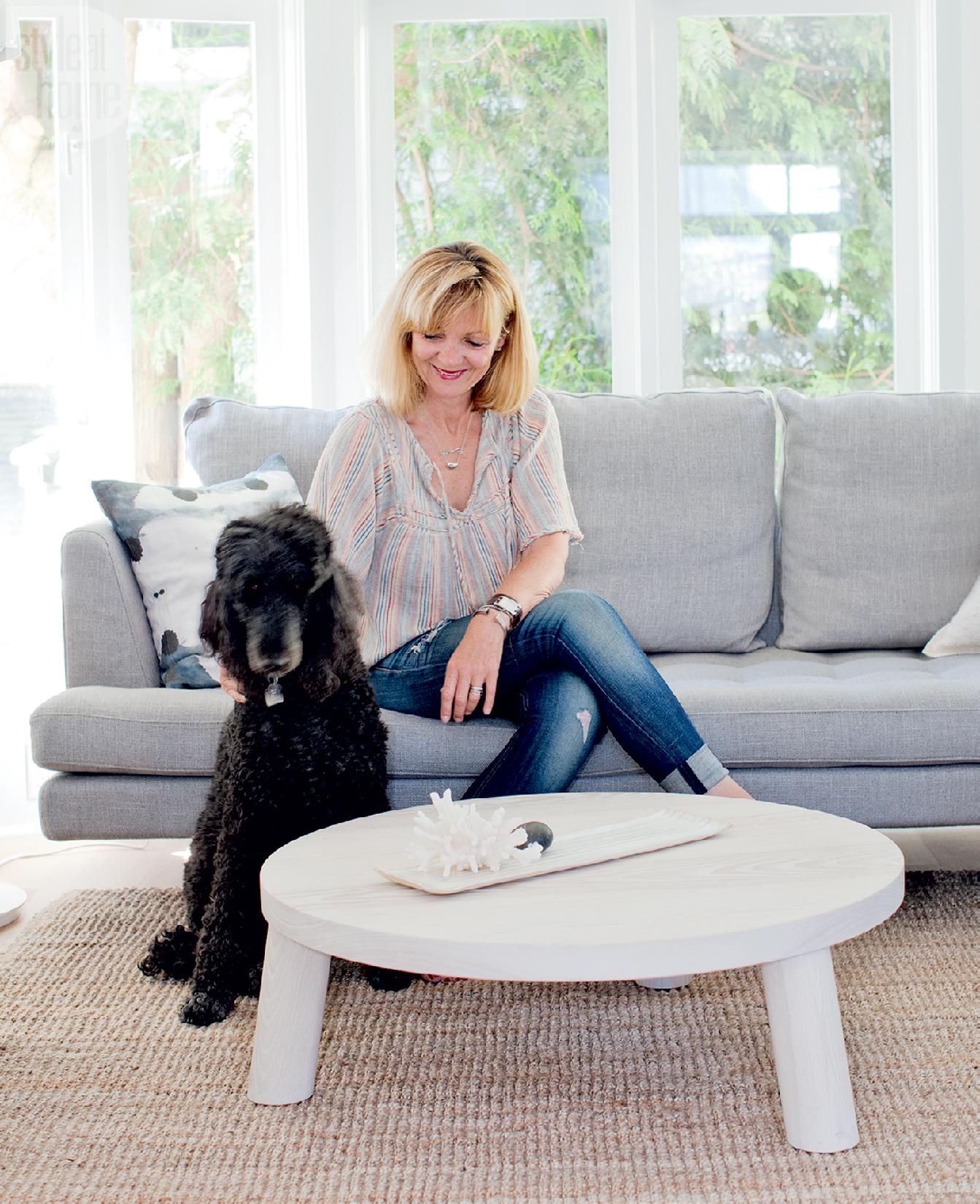 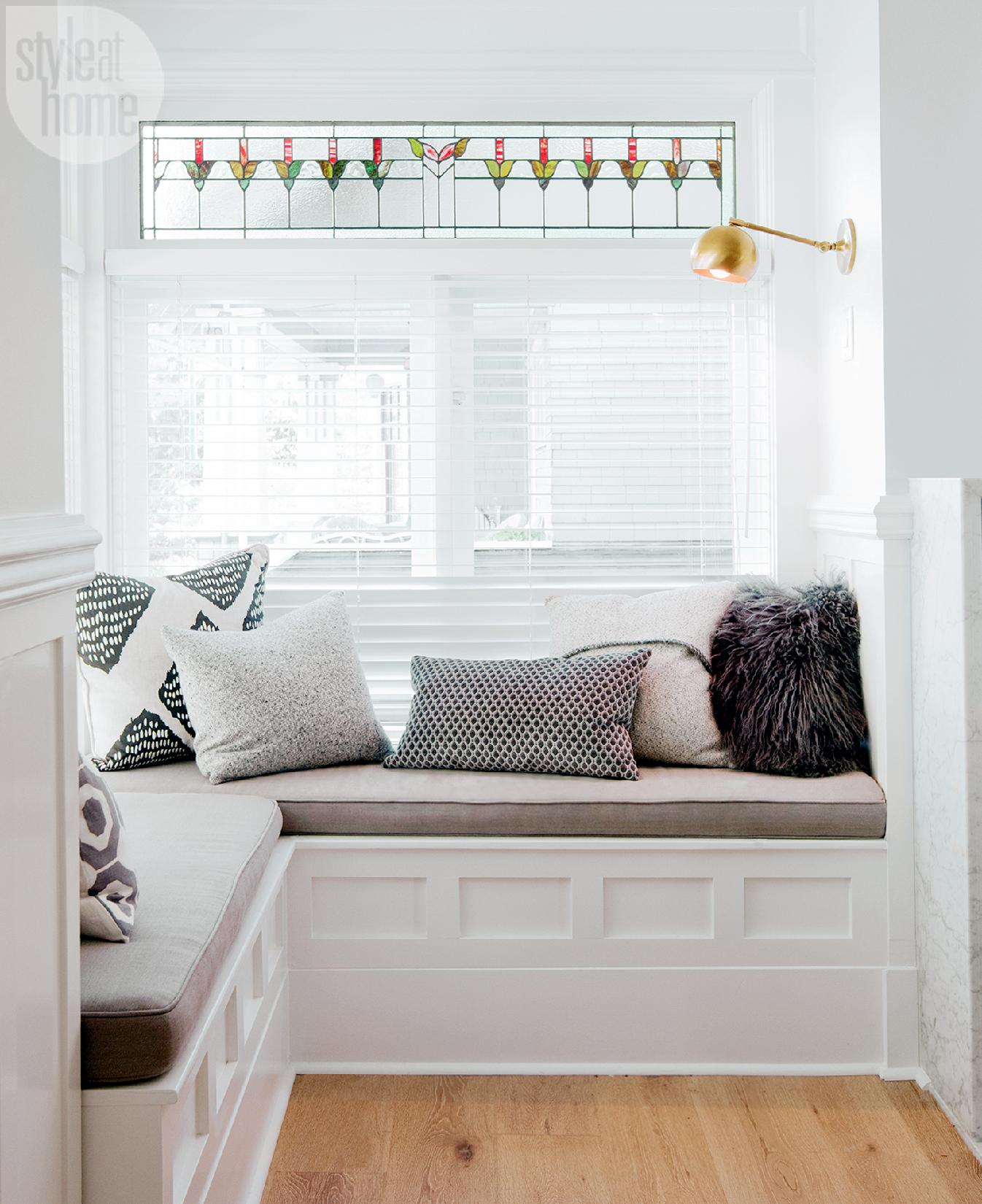 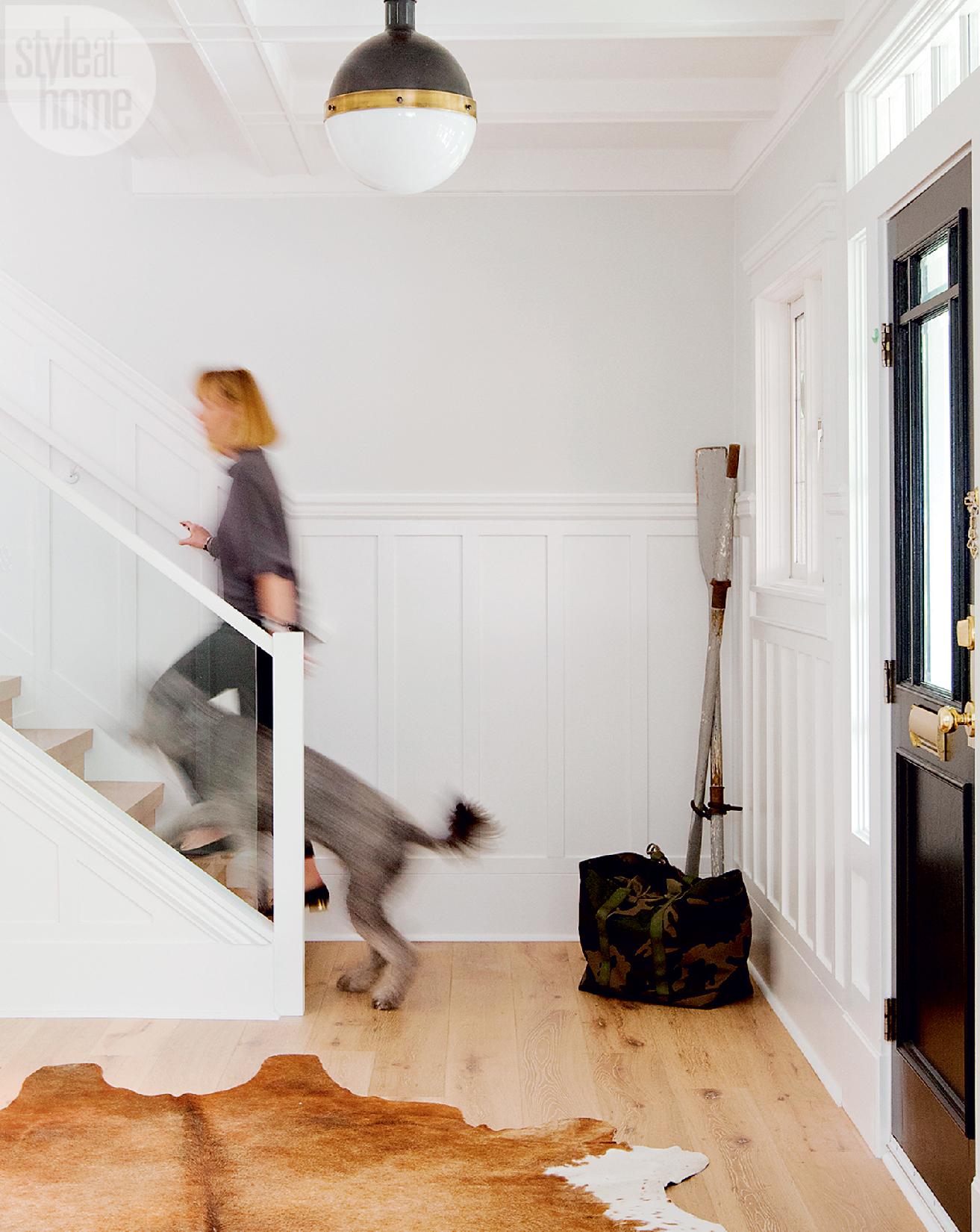 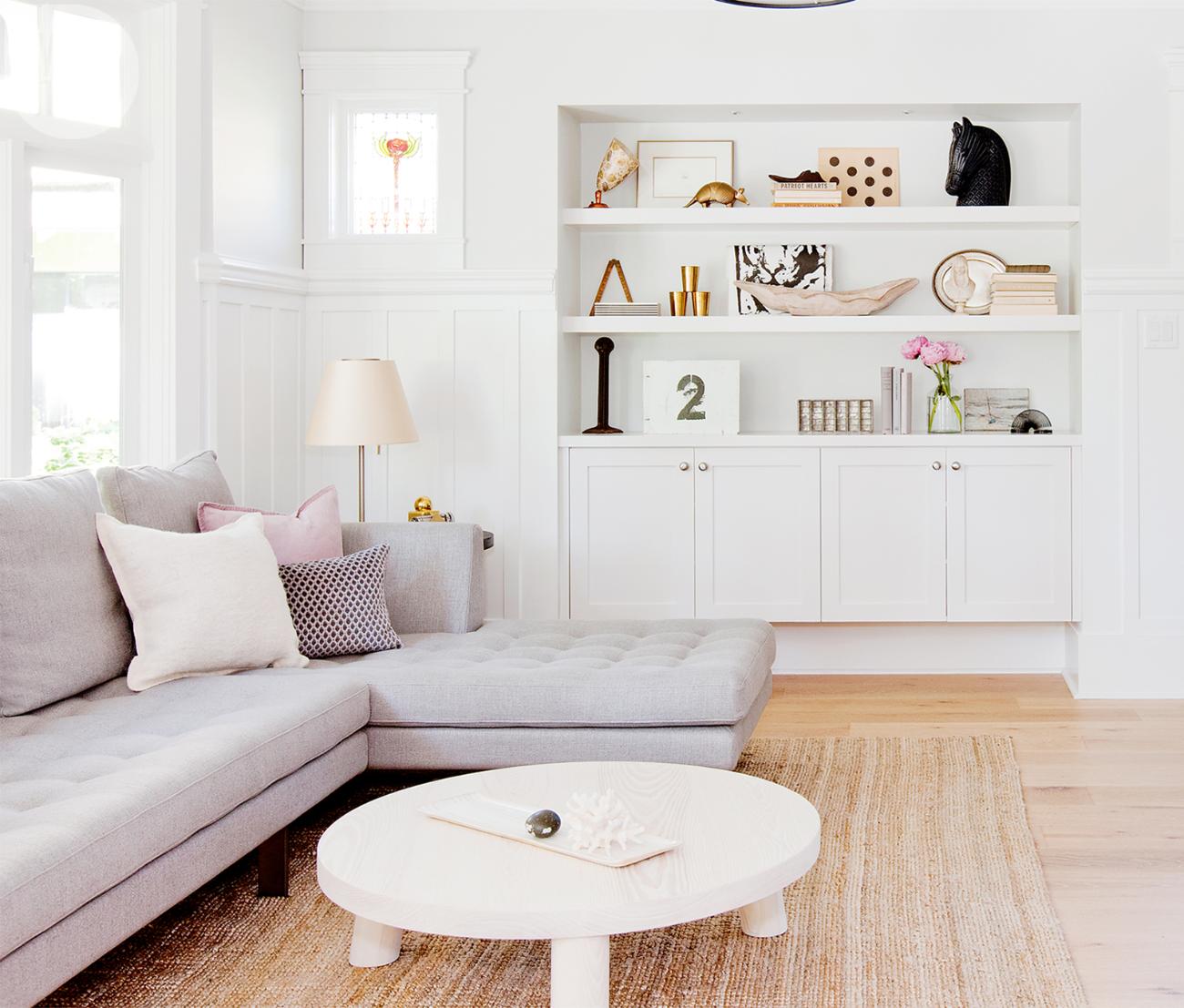 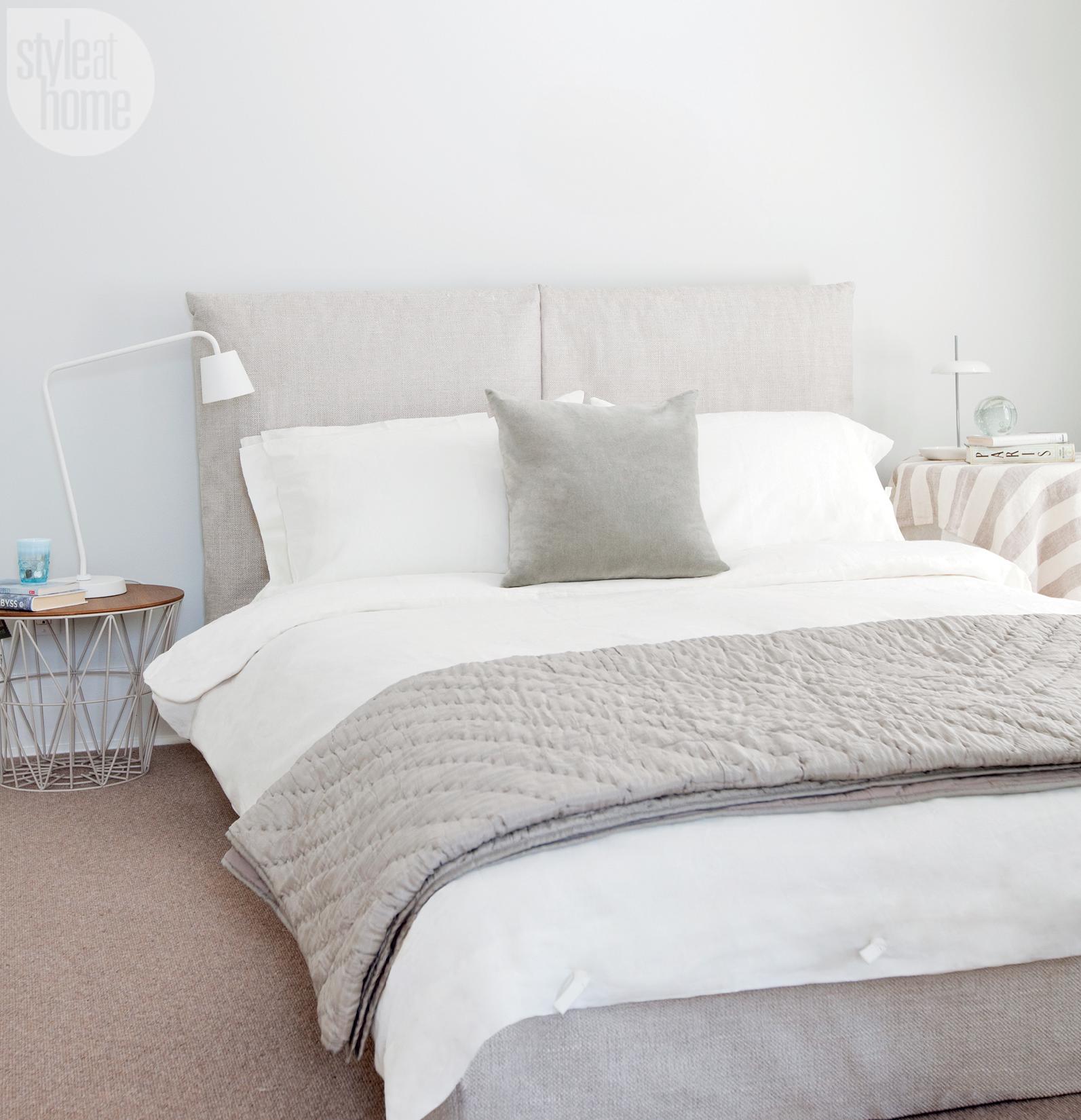 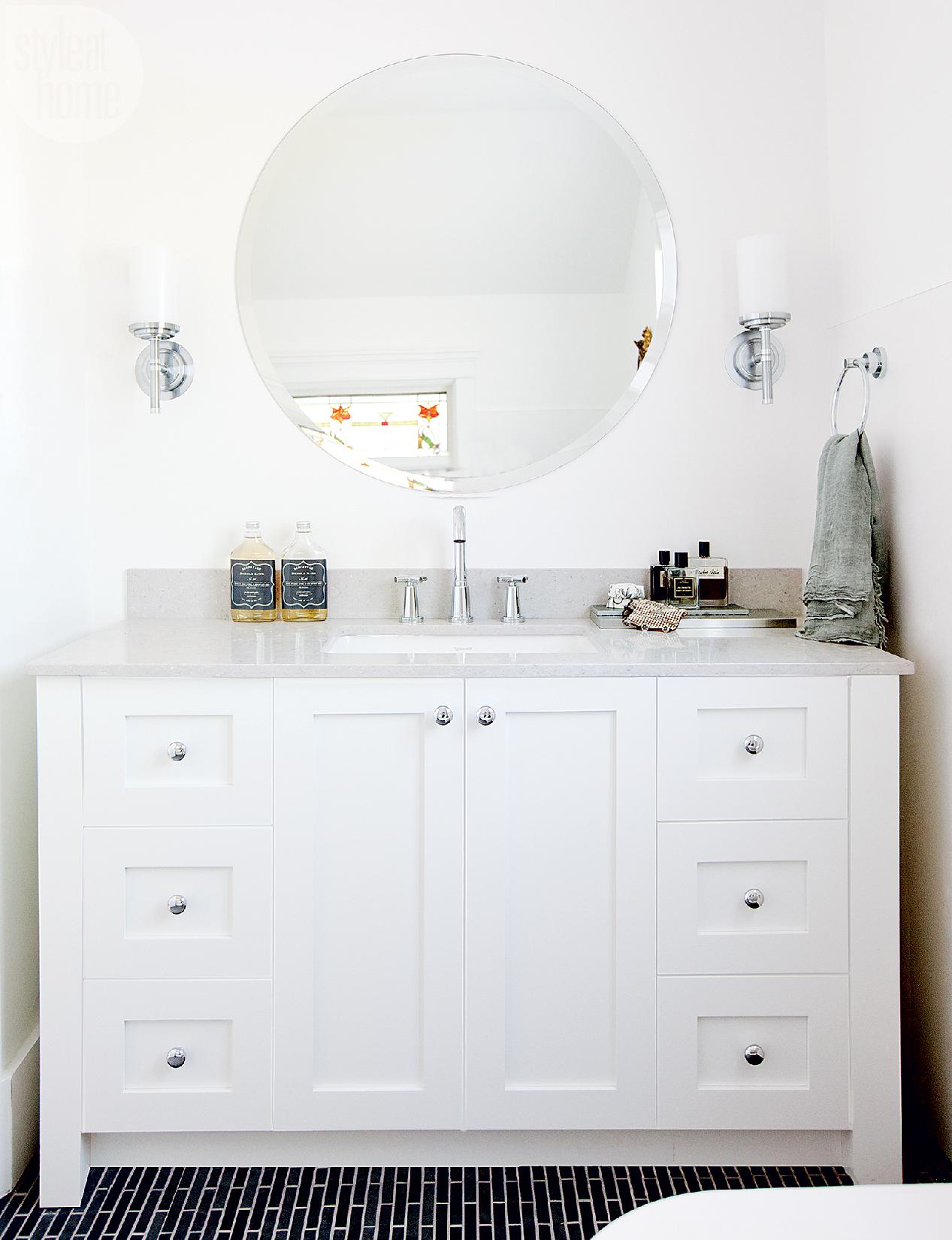 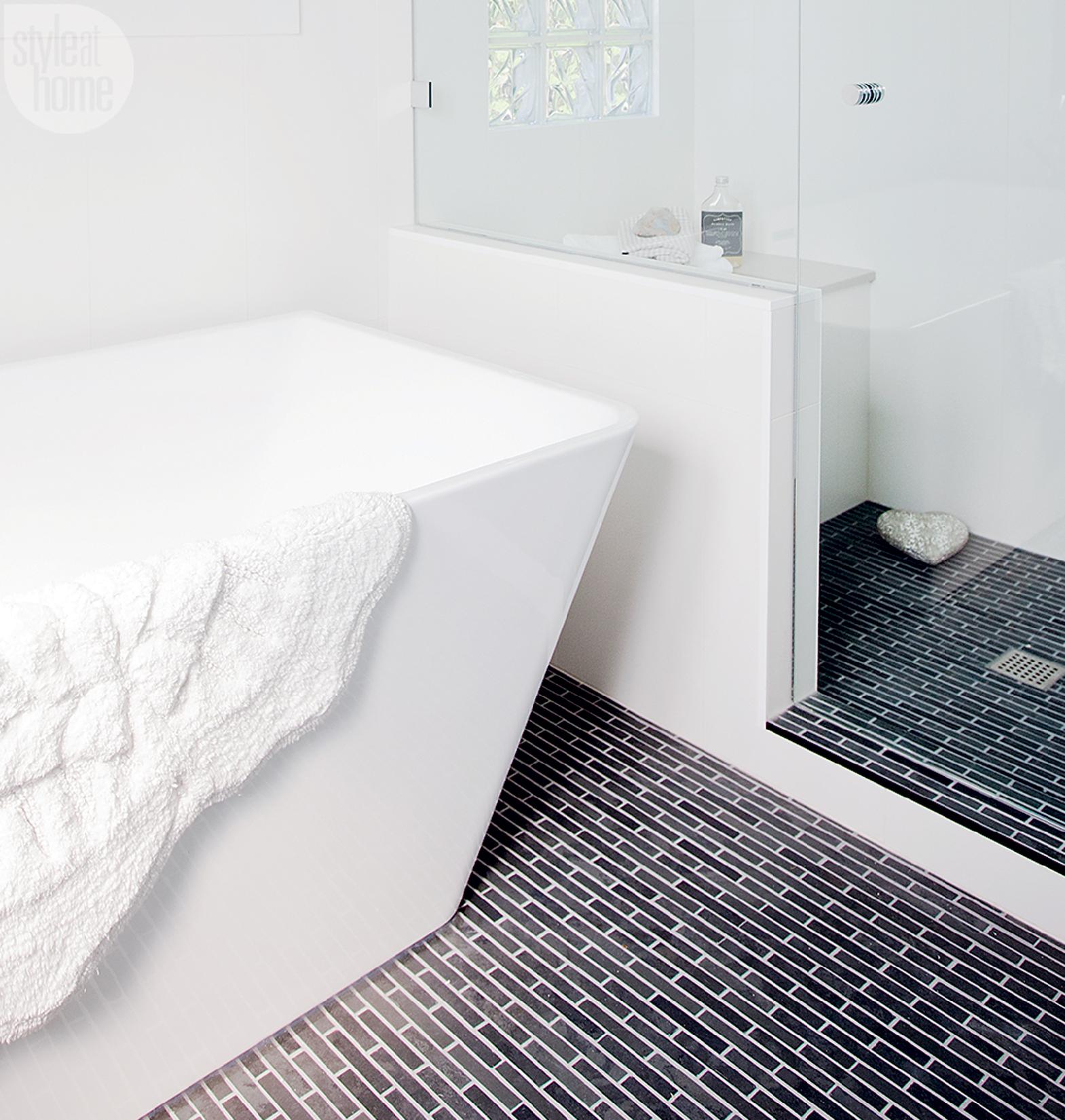 A shelving unit in the dining room is an attractive spot to showcase rustic and refined collectibles.

The Carrara marble fireplace surround enhances the dining room’s old-meets-new mix. A photograph of Paris, the homeowners’ favourite destination, hangs over the mantel.

A sleek console blends in with the living room’s millwork.

Homeowner Linda Adrian and her standard poodle Cedric hang out in the living room.

“We added a pile of toss cushions to the dining room banquette to make it feel like a cozy reading nook,” says Linda.

A modern glass banister and hide rug keep the entryway, with its wainscotting and coffered ceiling, looking current.

Open to the kitchen, the living room has a subdued palette inspired by nearby Kitsilano Beach in Vancouver. Designer Carrie McCarthy brought in some key dark pieces to play against the space’s paleness. “I’m a big fan of contrast,” she says. “A mix of light and dark gives weight to a room.” Carrie also sourced contemporary furniture and lighting to offset the traditional architecture.

The serene master bedroom is a lesson in layering. Carrie draped a striped linen towel over a dated table to give it a new look. “It’s all about using what you have,” she says.

With an original stained-glass window making a statement, the new bathroom needed to be simple and neutral. Dark floor tiles with light grout add interest without becoming a focal point. Above the vanity, a round bevelled-edged mirror adds a soft contrast to all the straight lines in the space.

Designers Carrie McCarthy and Tanja Hinder reveal what they learned.   Best advice “The more you know yourself and how you want to feel in your house, the more graceful the process and authentic the results.”   Most worthwhile investment “Eliminating the ugly old fireplace surround and replacing it with a new marble version. It’s simple yet grand.”   Best out-of-the-box idea “Flipping the living room and dining room dramatically improved the flow of the main floor.”   Favourite budget find “The big-box sisal rug in the living room is a design staple.”   Biggest regret “Not renovating the semi-basement at the same time to suit the rest of the house.”