Designer Jordy Fagan's sublime urban cabin offers a rustic escape in the heart of the city.

As a girl, Jordy Beale spent summers at Camp Walden near Bancroft, Ont. So did a boy named Ben Fagan. Little did they know they’d one day become permanent bunk mates. Now the happily married Fagans share an 1,800-square-foot bungalow in Toronto’s Humewood-Cedarvale neighbourhood that pays tribute to the place where they first met.

Jordy calls the style “modern cabin,” and it epitomizes her down-to-earth design philosophy in every way. “A home should be cozy, durable and affordable,” she says. “When guests drop by, I want them to feel 100 percent at home.” A happy advocate of slow design, Jordy accessorizes over time, changing and upgrading things as the occasion and money permit. “Why rush?” she says. “Just have fun when decorating and take the pressure off. When you can, grab new curtains or buy a new rug.”

Like most philosophies, Jordy’s was born of personal experience: “Ben and I were just out of university when we bought this place, so we were totally house-poor.” For two years, the young couple lived with old college furniture, an unfinished basement, a troubled bathroom, a closed-off dining room and a dysfunctional kitchen that frustrated Ben, who’s a great cook.

Eventually, though, they managed to save enough money to make their dream changes. A wall between the dining room and kitchen was removed, resulting in a chef-worthy space for Ben, and the basement was transformed to include a spacious home office for Jordy. They also reconfigured the bathroom, flipping the position of the toilet and tub, which made it possible to move around easily without being hip-checked.

The great thing about this urban cabin is that it doesn’t scream “woodsy” – it whispers it. A wall mural depicts fog and forests, an allusion to the couple’s years of canoe trips and hikes in Algonquin Provincial Park. The textures include raw wood surfaces and woven baskets. And the colours are quiet – whites, blacks, light oak and naturals, along with green, a hue Jordy considers a neutral. The look couldn’t be more fitting for a couple who loves to feel cozy and at one with nature, and have an affinity for the camp that’s still a big part of their lives.

Though the couple has made big changes, Jordy notes that no house is ever done – and hers is no exception. She’s forever tweaking the details. Fortunately, her slow design attitude is a perfect match for Ben’s easygoing personality. “It’s an ongoing joke in our house that Ben is constantly coming home to something new or different,” says Jordy. “But weeks or even months can pass before he notices!” 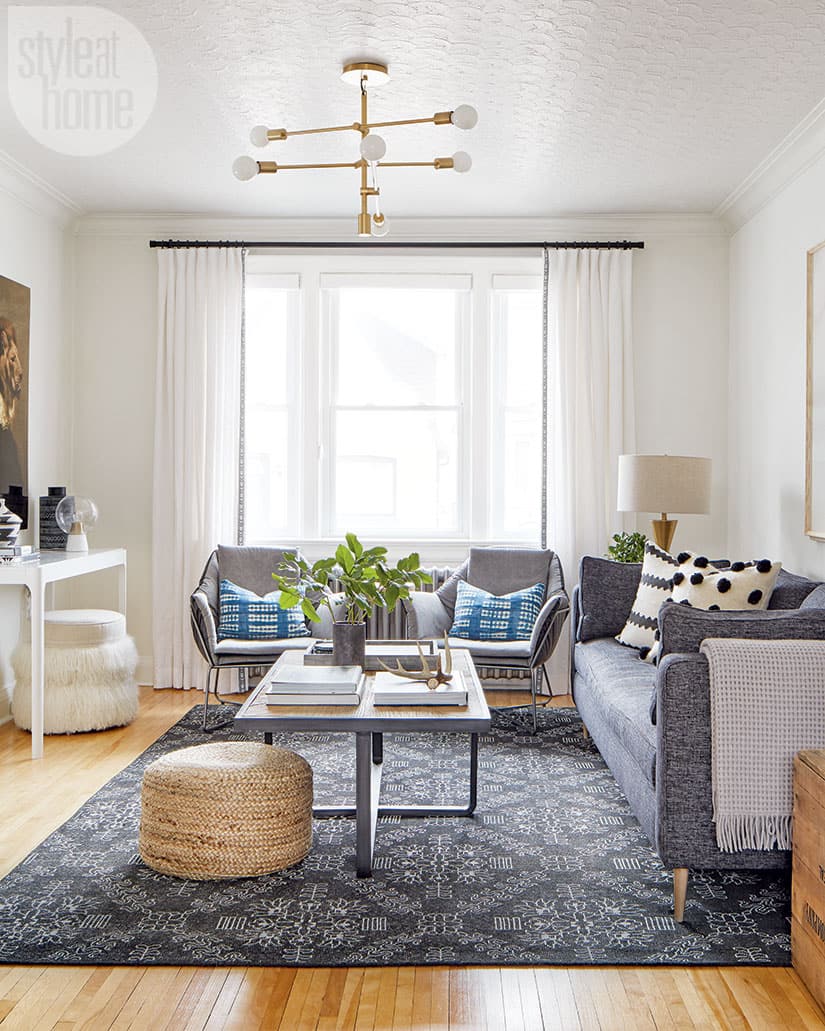 Large groups of friends laughing and telling stories well into the night is a common occurrence at Ben and Jordy Fagan’s Toronto home. And while there’s no campfire per se, the sofas and pouffe are arranged in a warm and cozy circle around the coffee table. 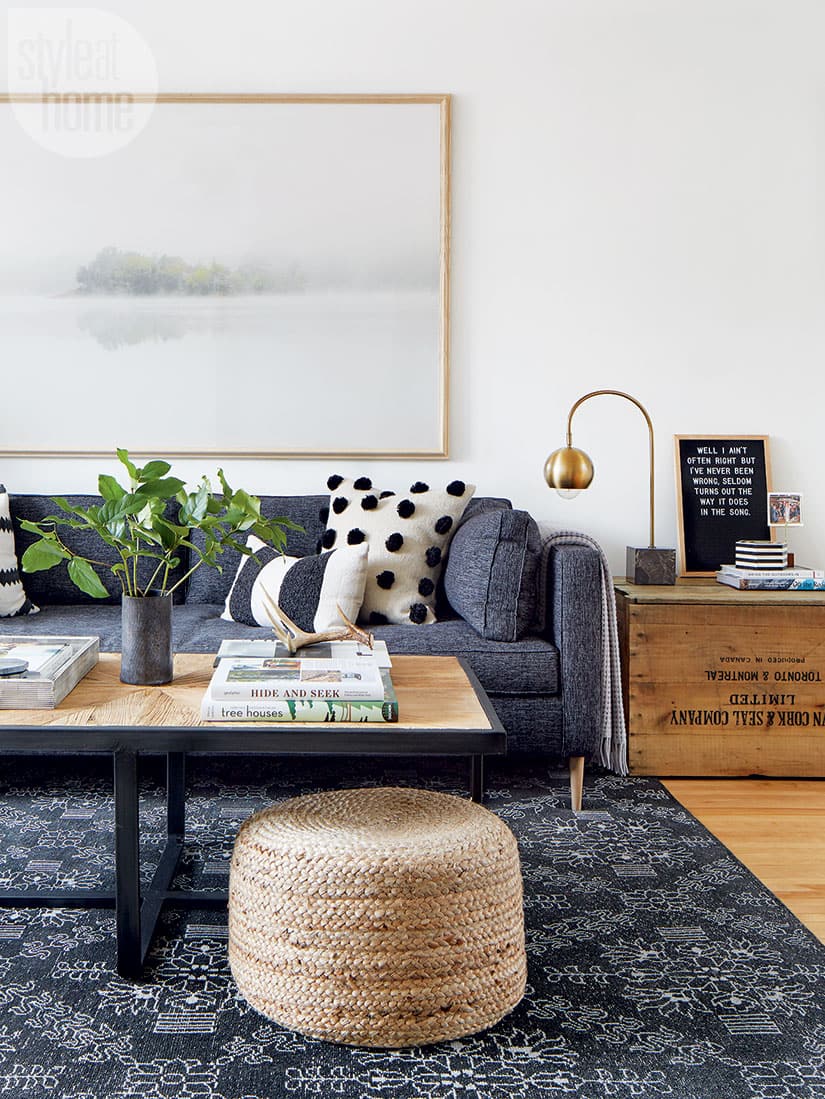 A natural composition quietly pays homage to the outdoors: The wooden coffee table, antique crate and jute pouffe bring in natural elements; the rug and toss cushions introduce hits of graphite and stone hues; and the print above the sofa references misty mornings the homeowners have enjoyed in Algonquin Provincial Park. 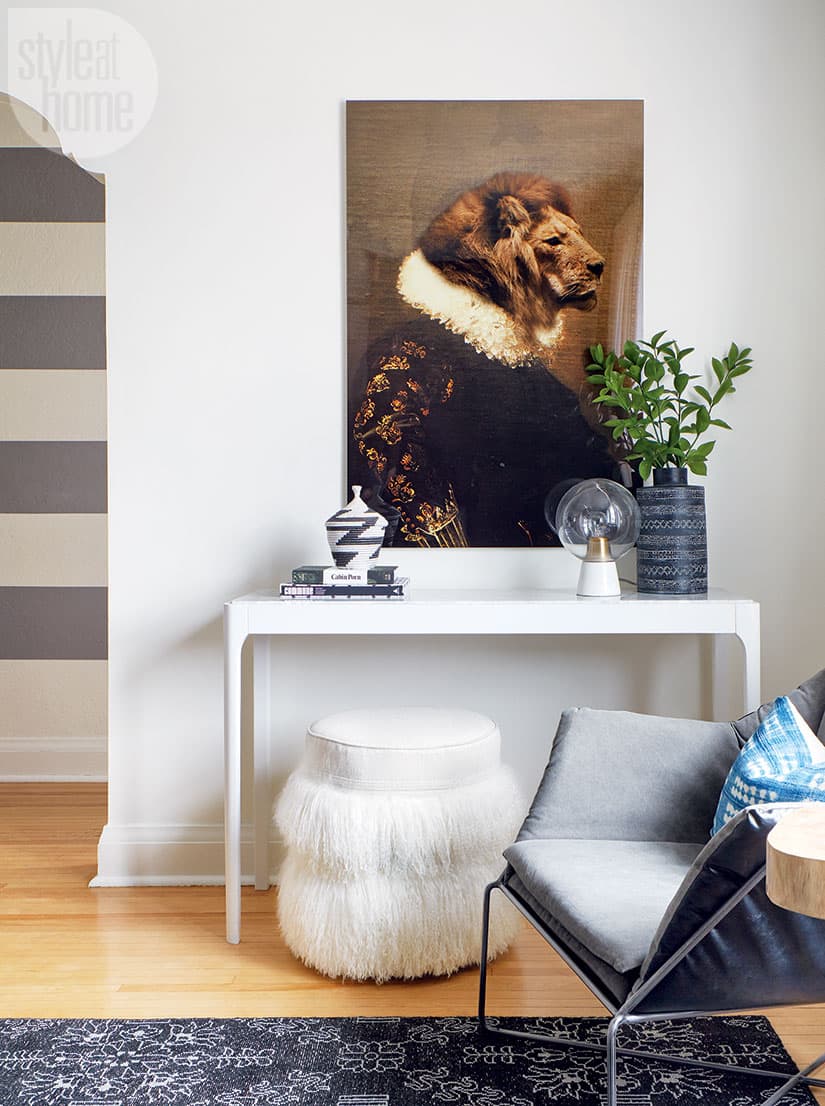 It’s hard to ignore a lion dressed in Renaissance garb. Clever and compelling, the portrait hovers over a sleek console table. The fringed lambswool stool, which echoes the lion’s ruff, can be pulled out for extra living room seating. 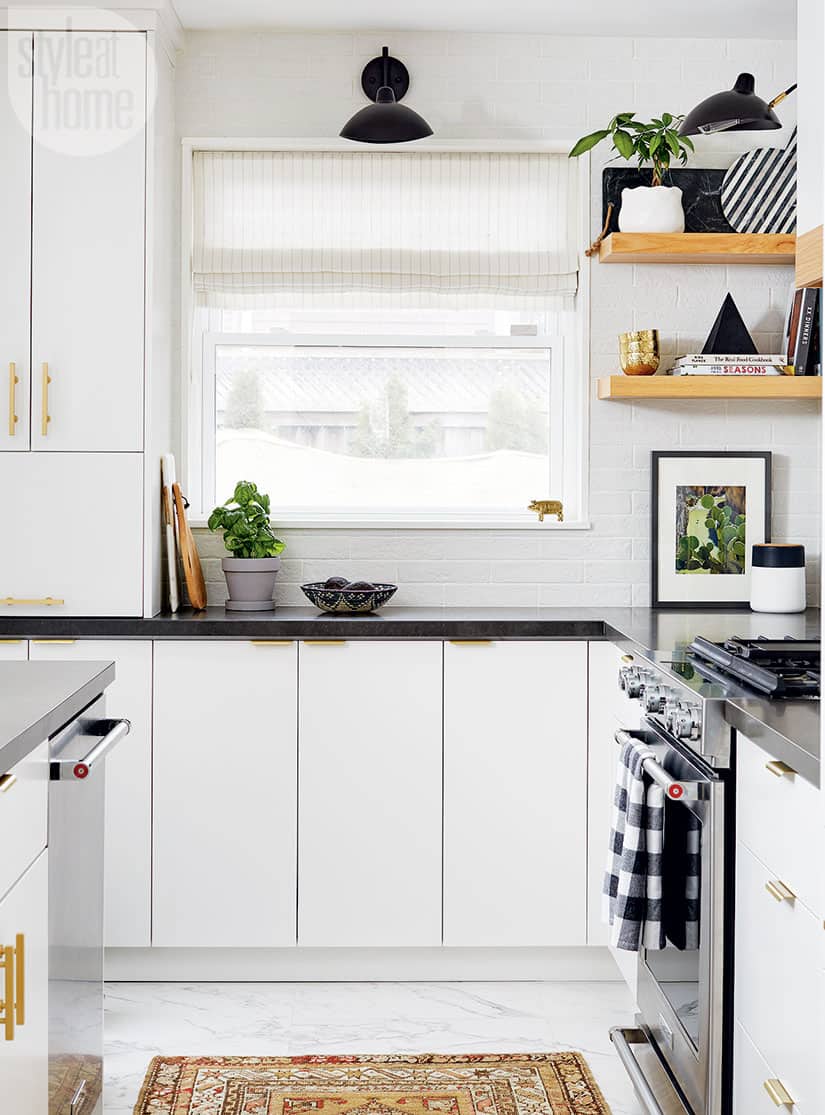 Ben is an outstanding cook, so he needed a place to let his skills shine. Removing a wall and replacing the unstylish tile countertops was a crucial first step in polishing the space, while the peninsula, open shelving and custom cabinetry provide ample storage.

Sure, meals unfold at this long woodsy table, but there are no mess-hall food fights here! Featuring mod chairs and illuminated by an oversized forest green pendant light, the look is one part rustic, two parts polished – which, along with the black, white and wood palette, is Jordy’s signature style. 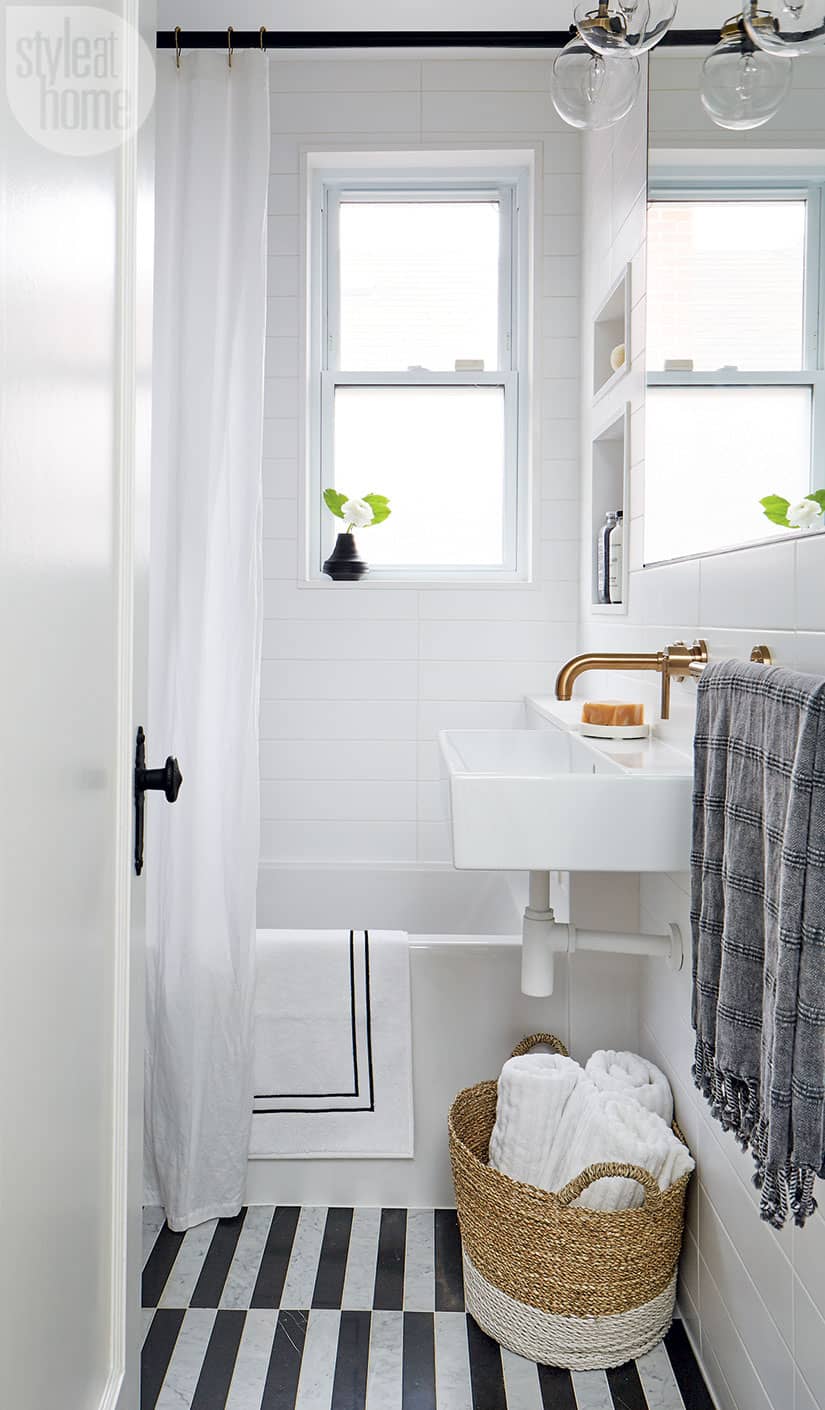 The couple saved up for two years before transforming the cramped and awkward bathroom. Graphic black and white turn it into an instant classic, while brass fixtures keep it on trend. Storage is at a premium, so the tiled cubicles come in handy. What’s more, they double as star-studded art. 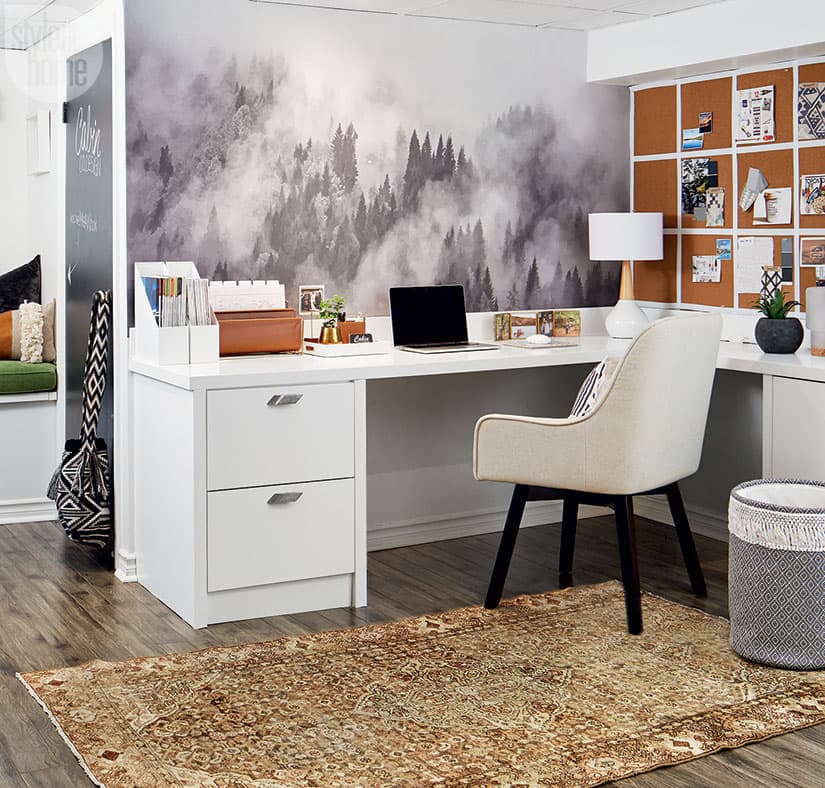 In Jordy’s basement office, a mural depicts a veiled cabin engulfed by alpine fog. The oversized desk and huge bulletin board are a great fit for function-loving Jordy, who likes to spread out when she works. 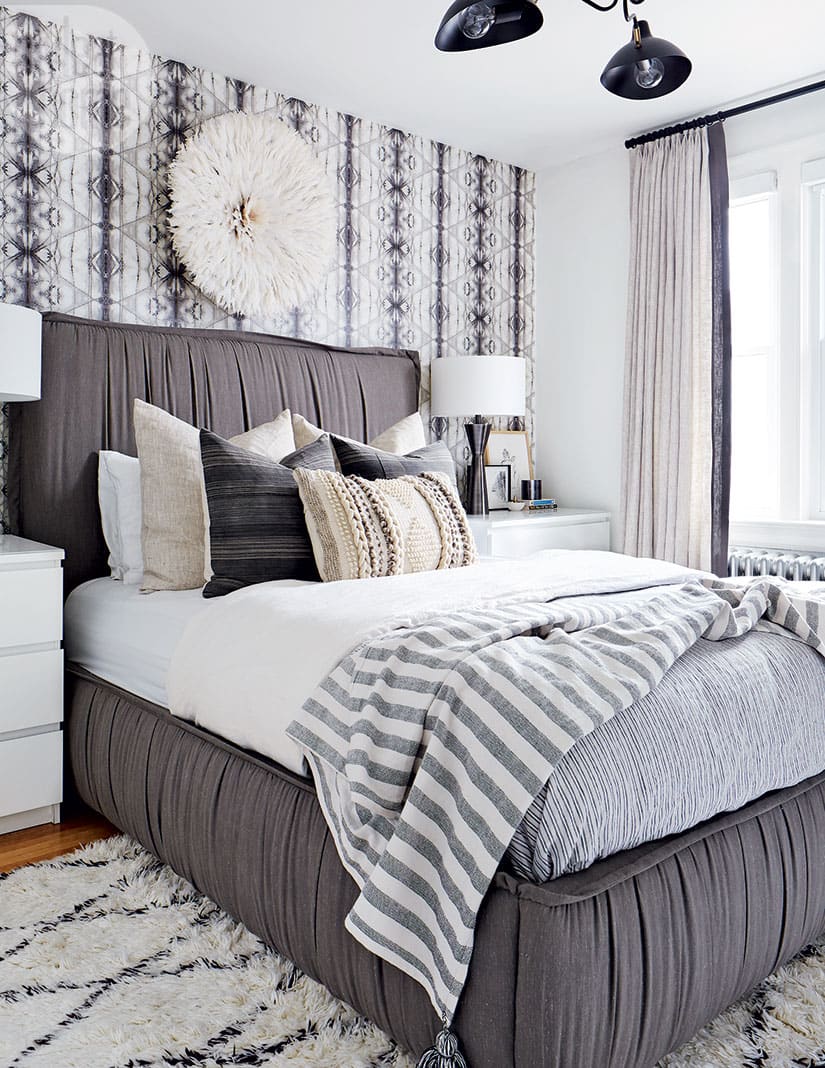 “If you open our closets, you’ll find the same palette of black, white, grey, cream, green and denim that are on display throughout the house – plus a scary amount of plaid,” says Jordy with a laugh. Here, graphic wallpaper topped with a feathered juju hat, a plush berber rug and woolly toss cushions on a linen-upholstered bed are outfitted in colours that match the homeowners’ wardrobes.