A glitz-free design lets Mother Nature be the star all year long.

The view of Sophia Reay’s backyard in Salem, Ont., would inspire a landscape painter. Like an A.Y. Jackson canvas come to life, a clutch of cedar trees sits on a bluff overlooking the Irvine Creek, which cascades into a 30-foot waterfall. It’s spectacular and sonorous, especially in winter, when the snow settles on the branches and the backyard puts on a show.

“Our home is right on the gorge. You can see the old Salem gristmill,” says Sophia, the principal designer behind LemonTree + Co. Interiors, which sells vintage furnishings and custom linen goods, such as drapery, aprons and toss cushion covers. “When the waterfall freezes over, it’s beautiful. Then when it thaws, you hear huge ice chunks fall and the whole house shakes.”

The scene is stunningly captured from the designer’s many-windowed living room in the home she shares with her husband, Richard Frede (a builder who runs R. Frede Construction), and their dog, Maggie. “We chose to build a modern home because it allowed us to get away with much more glass than a trad­itional design,” says Sophia of the light­filled 3,200­ square­foot structure Richard’s company erected in 2016. “We love nature, which is why we wanted the entire back of our home to be one big window. That is our art, our colour. It revolves around cedar trees, the rocks and the gorge.”

Simple Mid­-Century Modern furniture in an earthy grey and white palette creates a serene interior. Yet the restrained rooms are undeniably cozy, offering many spots to lounge with a cup of tea and read a book or get lost in the forested view. It’s all about weaving in the right details, says Sophia. “Modern can feel stark unless you use texture and organic elements,” she says.

That approach also plays into how Sophia decorates for the holidays. Seasonal touches take the form of a potted poinsettia on a side table, for instance, or an understated wreath pinned to a door. “I used to be over the top with sparkles and glitter dur­ ing the holidays, but I’ve pared down completely, using only a few natural touches. Why would I want glittery branches when I can look out to see real ones?” says Sophia with a laugh. In a house like this, you really can’t compete with Mother Nature, she adds. “You’ll always lose!” 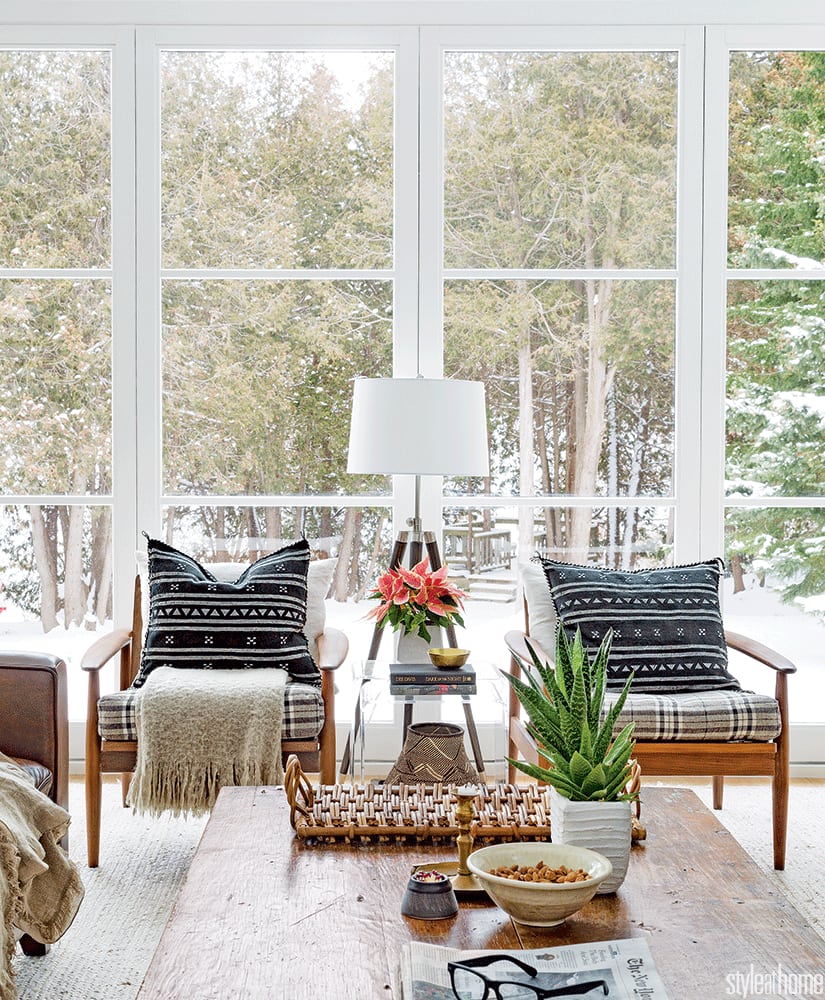 Behind a pair of airy walnut-framed armchairs (a Kijiji score), massive windows invite cottagey scenery into the stylish living room – maximizing the nature views was essential to the design of this stunning new build. 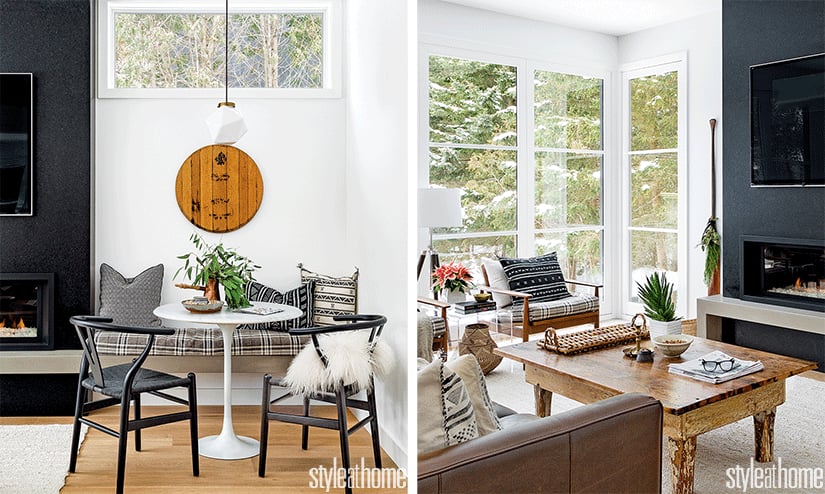 The grey quartzite hearth on the living room’s substantial black granite-clad fireplace extends along the wall to create a bench. Topped with cushions and coupled with a table and chairs, the feature becomes a cozy versatile nook. “It’s a nice place for morning coffee,” says homeowner and designer Sophia Reay. “When people come over, they gravitate there with their drinks.”

We watch TV; we watch movies,” says Sophia unabashedly. “So why hide it?” That said, she used black to make the TV visually recede into the fireplace surround, “to let nature and the view dominate.” Bits of seasonal and year-round greenery complement the verdant views. 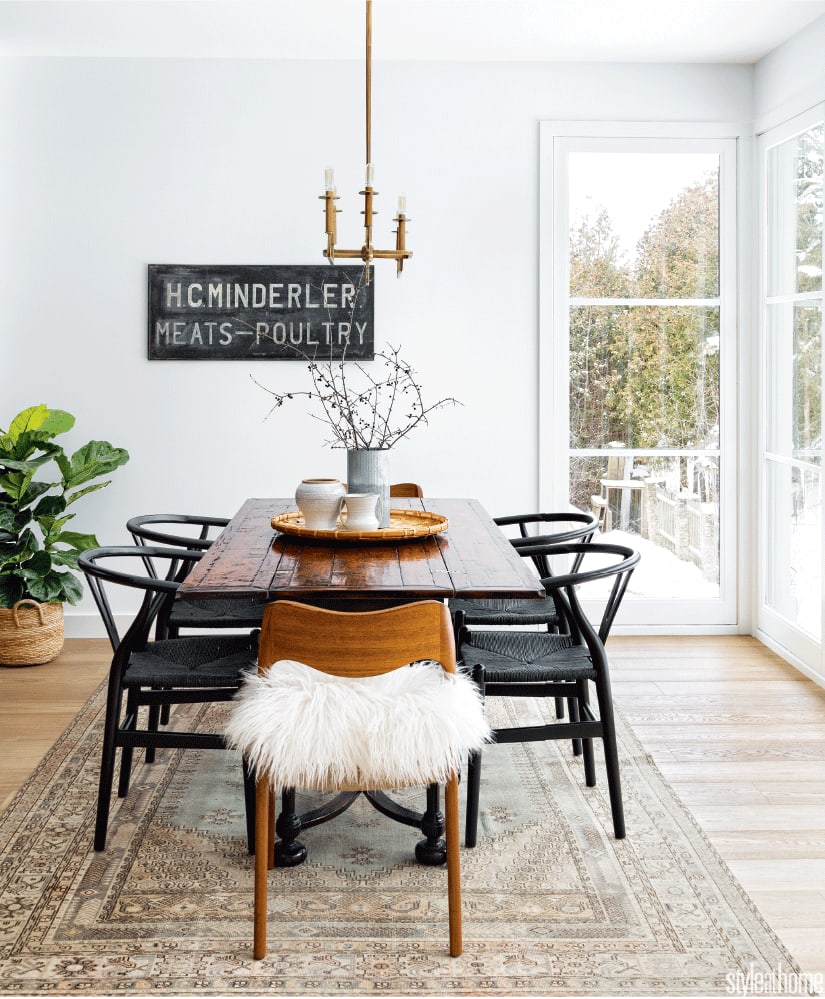 “Many people love modern open-concept homes, but that design takes away some coziness,” says Sophia, who layered the spare dining room with warmth in the form of worn, weathered and textured surfaces. An old metal butcher’s sign purchased in an antiques shop is a unique addition. 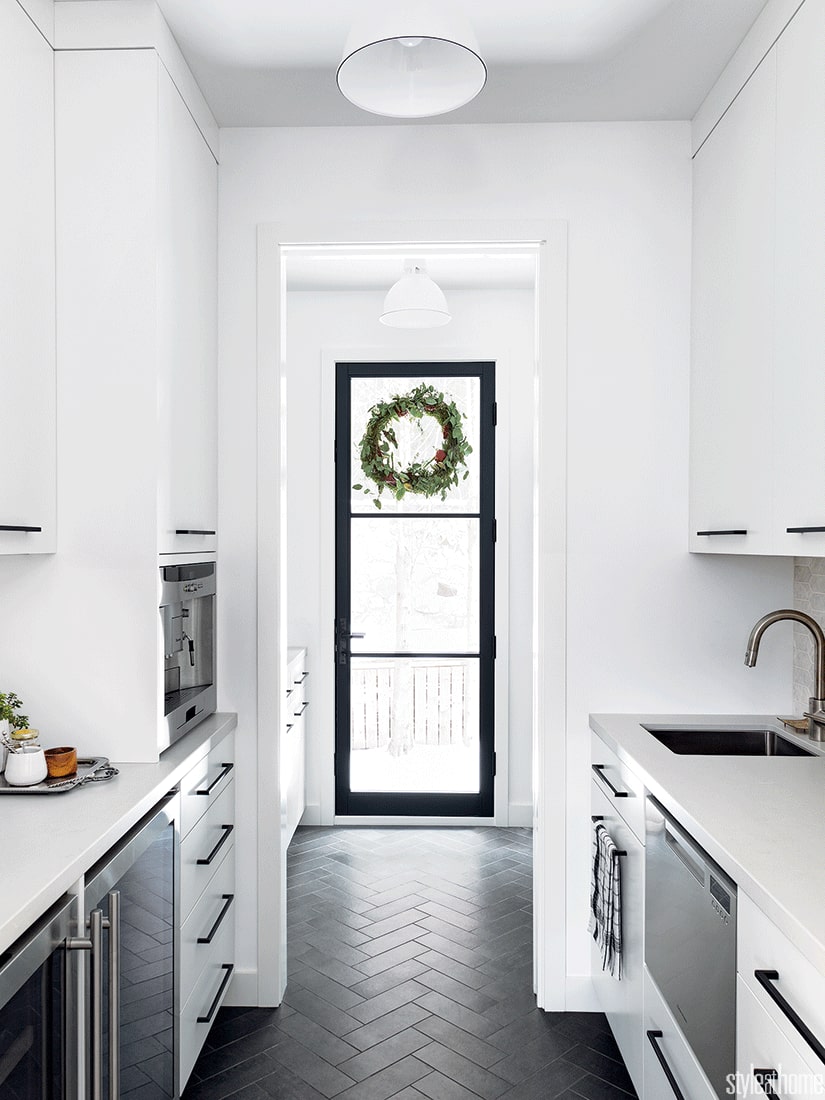 The simple butler’s pantry and, beyond it, the laundry room feature dark porcelain floors (slate was the obvious choice, but Sophia wanted everything to be low maintenance, so she decided against stone). “My mom made that wreath,” says Sophia. “It’s not her profession, but she’s amazing at it.” Its mix of pinecones, milkweed husks and dried pomegranates imparts a natural feel that suits the house. 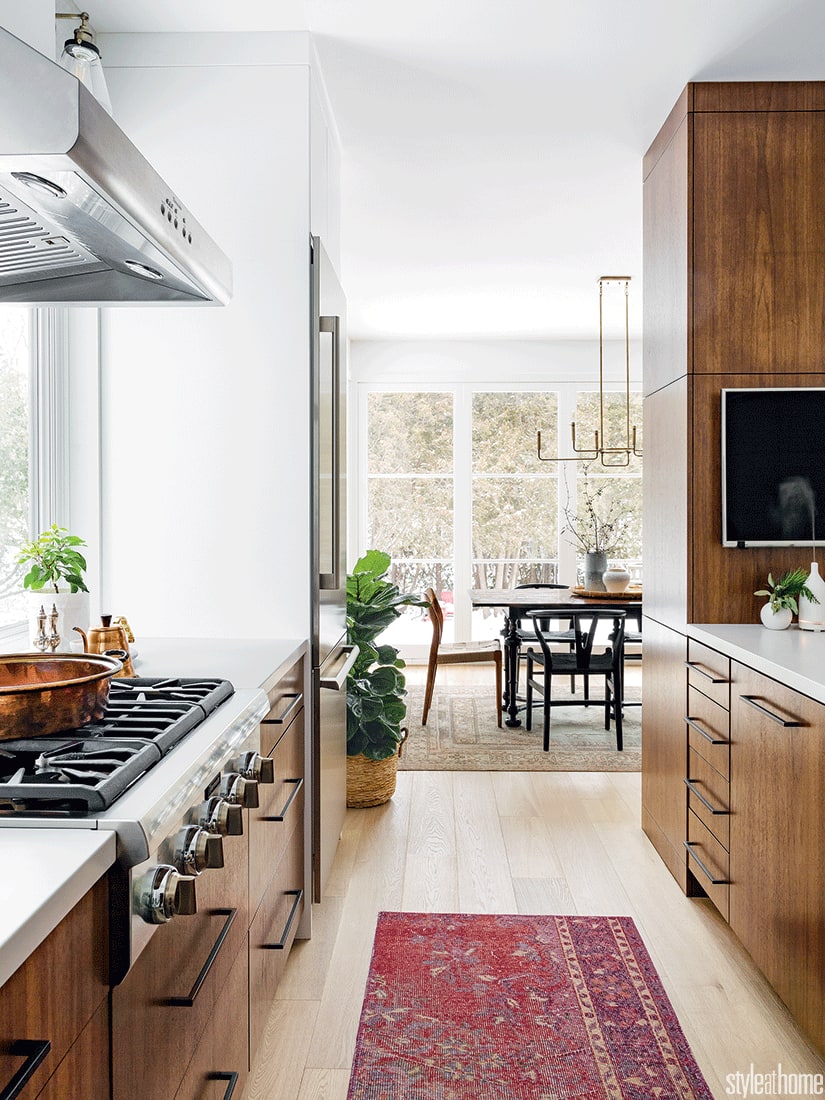 Flowing into the dining room, the two-toned kitchen features an arresting mix of walnut and white cabinetry. 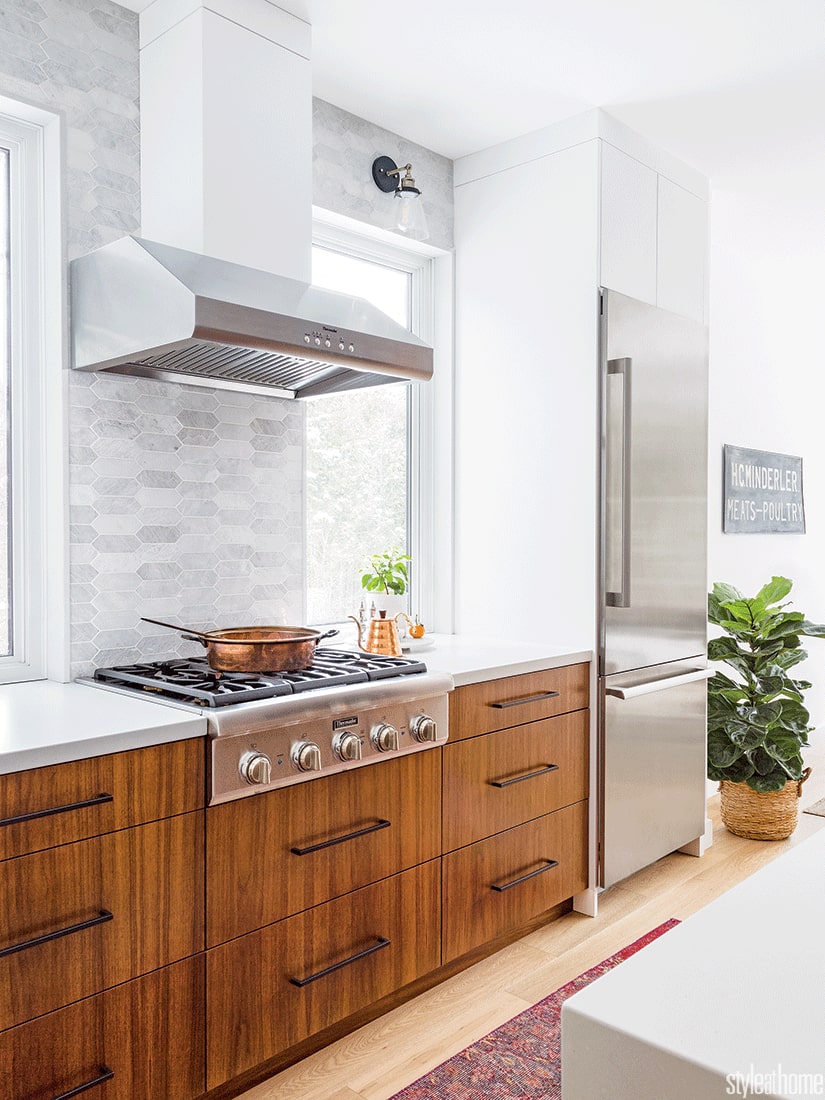 Sophia chose matte Caesarstone countertops for their durability and good looks. “I don’t like glossy surfaces because they’re too showy and formal, plus water and crumbs are too visible on them,” she says. Black-finished brass pulls and a marble-tiled backsplash lend refinement. 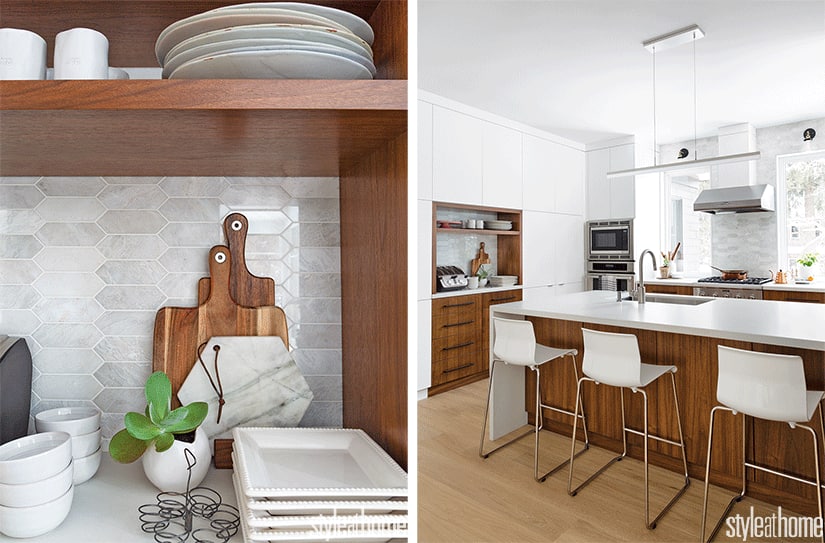 Every detail in this home was considered, particularly so in the über-functional kitchen. “The pantry wall is only a foot deep,” says Sophia, “so it’s half the depth of the typical design, where you can’t find anything in the back, and it gets messy and cluttered.” On this wall, she created a toast station to avoid countertop clutter. Finished with walnut details, the nook is complete with drawers below for tucking away dishes and flatware. 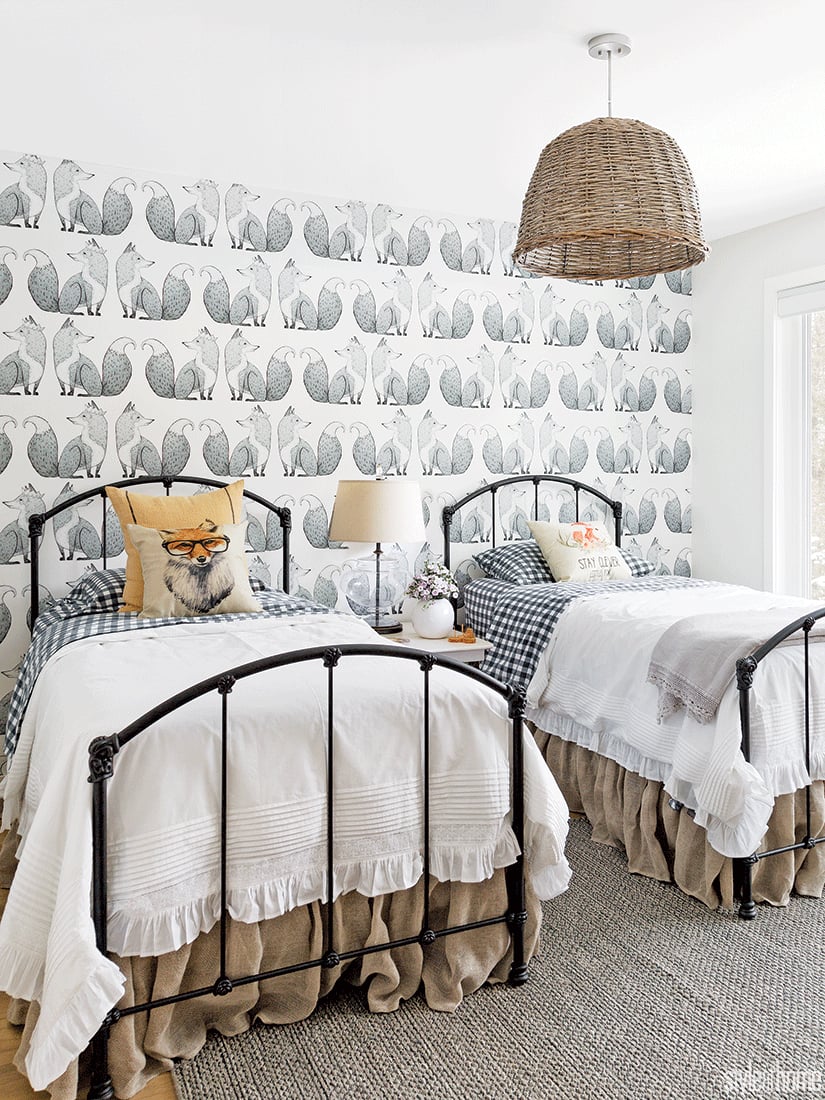 Sophia’s husband, Richard Frede, has nine grandchildren, so she created a kids’ room for when they stay over. Matching black iron twin beds and checked bedding are charming choices, while the fox-patterned wallpaper and toss cushions are cute but not kitschy. At the opposite side of the room, a vintage dresser styled with one-of-a-kind items shows off Sophia’s love of nature. 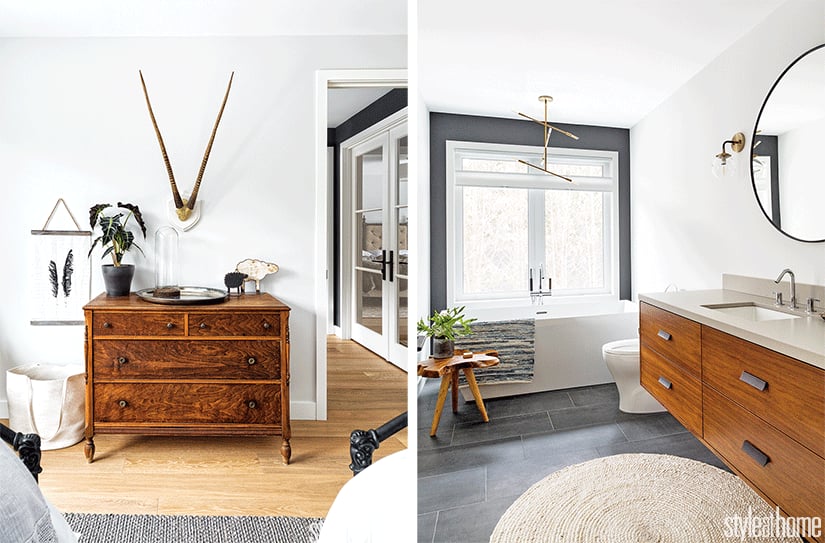 A charcoal-toned accent wall and slate-look floor tiles elongate the main bathroom, offering a handsome backdrop for the custom walnut floating vanity and sculptural brass chandelier. “Everything here is streamlined and square, so I added a round mirror and rug,” says Sophia. 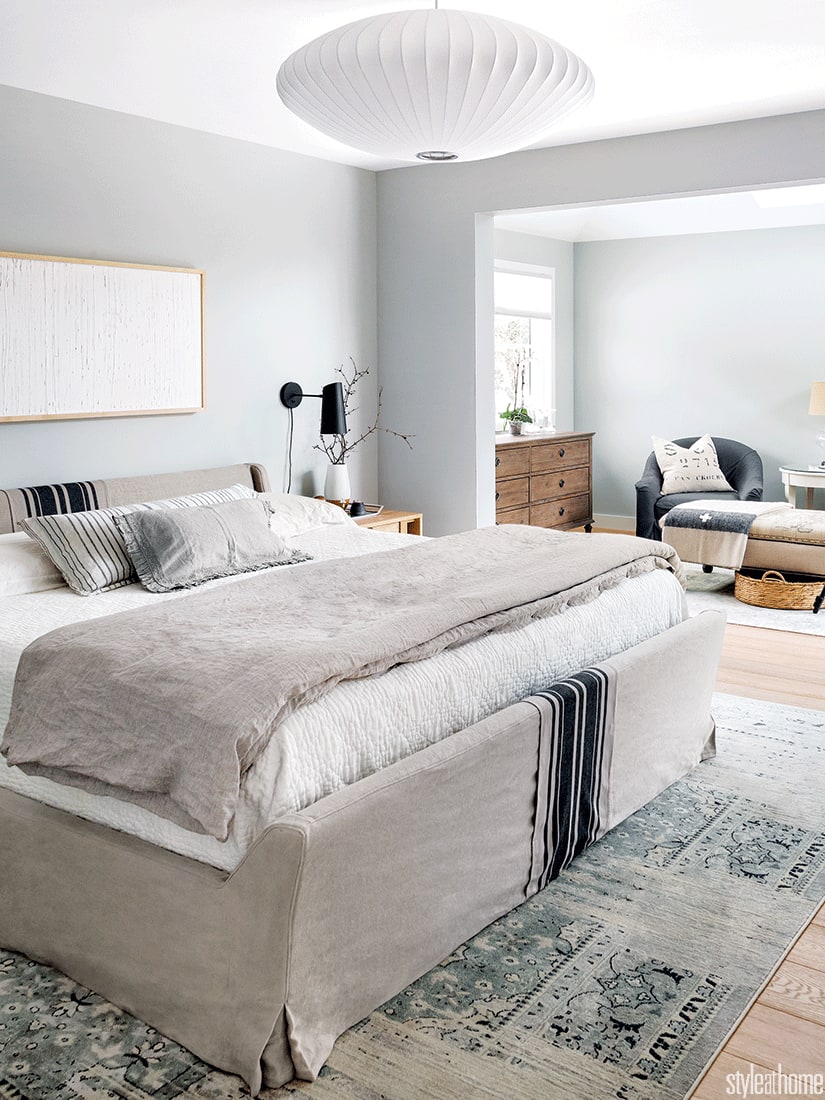 7 pieces that'll give any room a Mid-Century Modern feel

From a clean-lined console to a peg-legged chair, these items will help you achieve that 70s vibe.