Tucked along the southern shores of Ontario’s Lake Rosseau, this new-build cottage pays homage to nature and tradition with a twist.

The design inspiration for this cottage far exceeded the usual mood board. Forget paint chips and fabric swatches – it was all about dirt paths strewn with pine needles, arrestingly blue lake water and rugged outcrops of pink-veined igneous rock.

“The whole catalyst for this project was nature and its awesomeness,” says designer Cory DeFrancisco, principal of Muskoka Living Interiors. “It grew organically. I visited the property, sat on the amazing lot and just stared at it.  I knew right away that the cottage had to be integrated into the rocks. It was dictated by the land.”

Cory drew up plans for a 7,500-square-foot cottage that would respect the mature two-acre waterfront setting. “The property has its own island and, at some points, the cottage would be only 35 feet from the water,” he says. “It was critical that it fit seamlessly within the landscape.”

The structure also had to merge with Cory’s aesthetic vision. “I wanted a contemporary take on traditional coastal living,” he says, adding that his aim was to stay true to the macro features of traditional waterside architecture but to also include a modern spin in the micro elements.

Cory designed the cottage’s double-gabled facade – a macro element – to speak to tradition, while the windows –  a micro element – are fresh and current, thanks to both their scale and the sheer number of them. He finished the structure with copper eavestroughs and downspouts, painted cedar siding and cedar shake shingles for a meticulously crafted exterior that feels natural and inviting.

It was important to continue that energy inside. “The interior is highly detailed,” says the designer. “The white oak floors were installed raw and then hand-finished. There are antiques imported from Europe and original artwork from Los Angeles.” Yet it’s the kind of space you want to walk around in barefoot. The open plan of the first floor has a make-yourself-at-home feel that’s furthered by casual features like slip-covered furniture and sliding barn doors.

The mostly white interior gets contemporary contrast from dark elements. Black pendant lights run along the width of the first floor and, in the kitchen, deep brown paint punctuates the upper cabinetry and island base. Perhaps the most graphic use of dark tones is in the windows. “Their black hue, meant to mimic the modern look of steel, literally frames the view of the lake and trees, almost bringing them into the room,” says Cory. The effect is only fitting, given that nature planted the seed for this spectacular cottage. 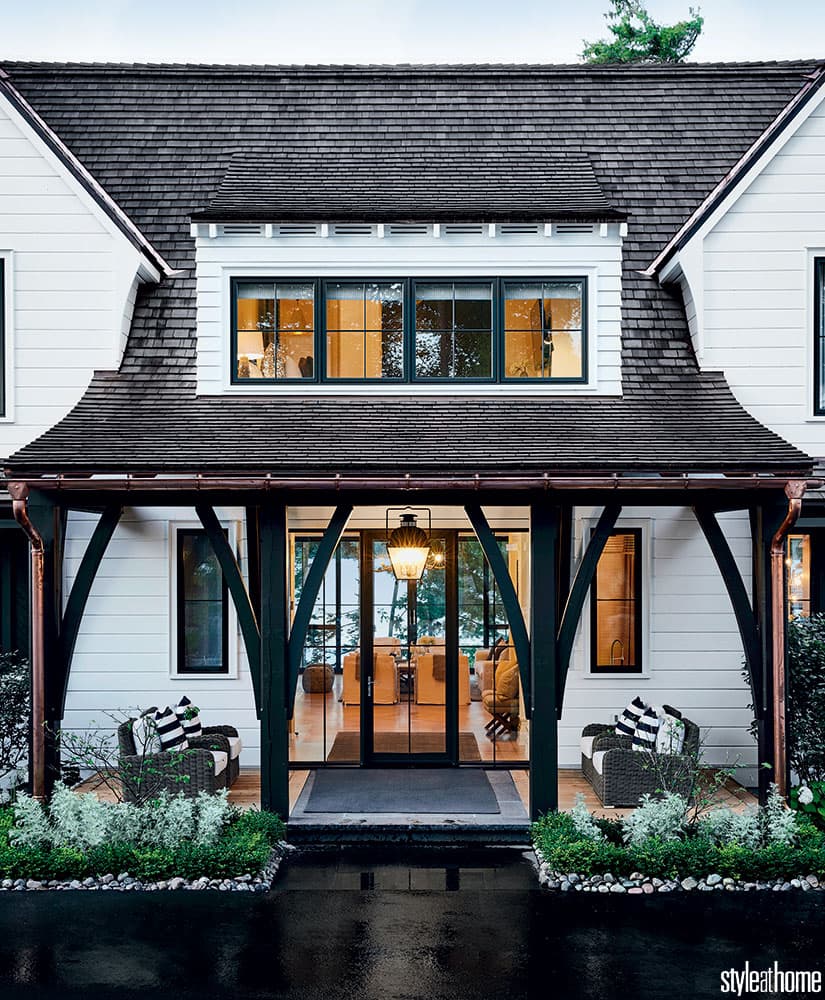 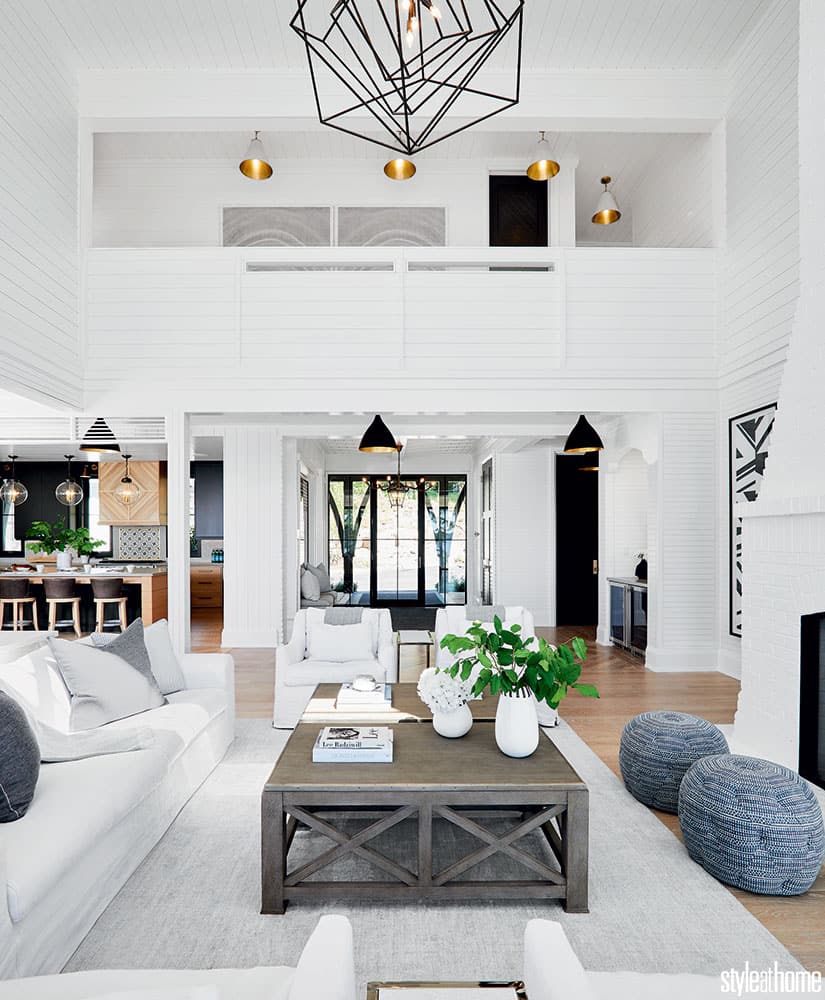 With its hand-milled channel-grooved cathedral ceiling, this sitting area in the great room is certainly grand. Hints of gold and dark pops from the lighting, artwork and nearby kitchen make it look sharp, while laid-back furnishings provide a casual air befitting lakeside living. 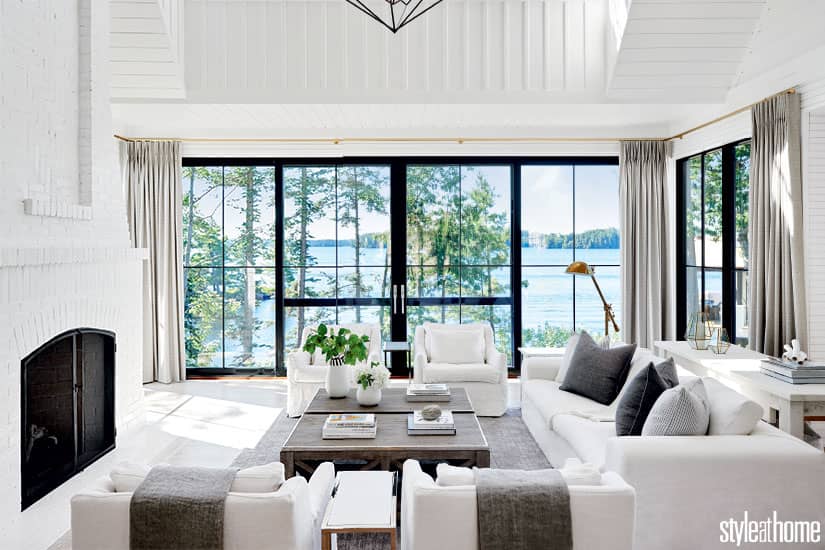 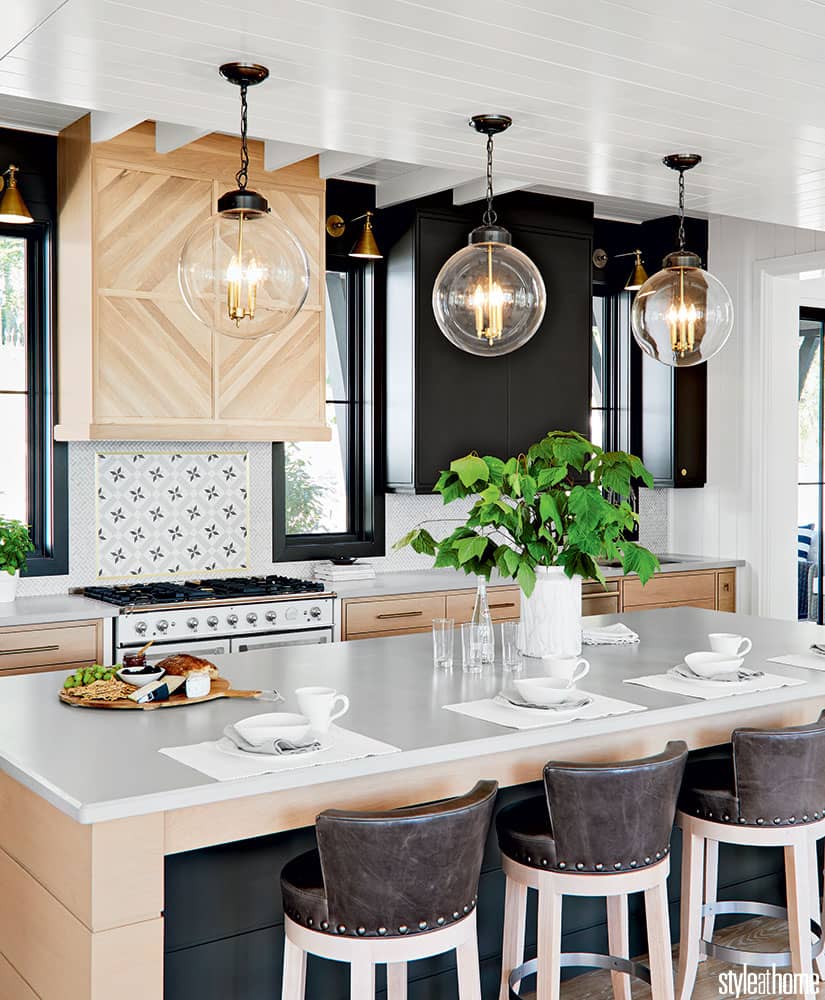 “I really wanted the kitchen to be defined by textures,” says designer Cory DeFrancisco. “The mix of wood, tiles and leather is edgy, yet it fits in seamlessly with the rest of the home.” 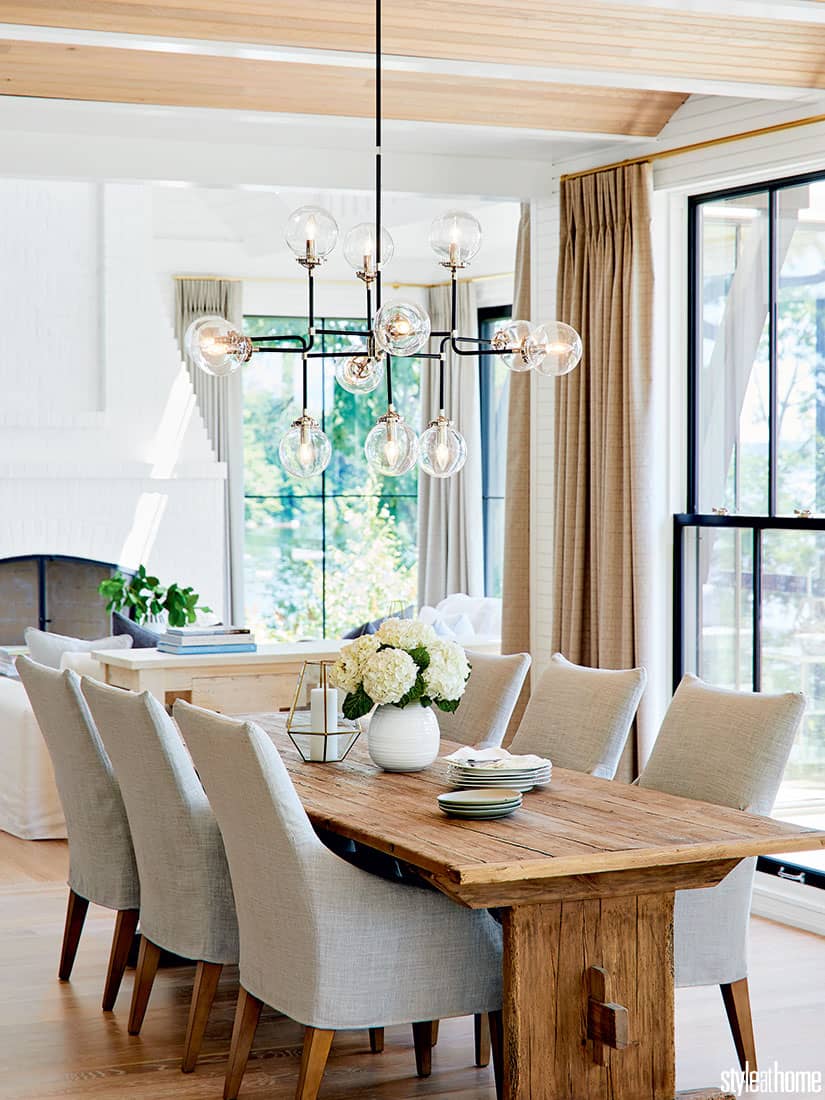 A contemporary pendant light illuminates an antique dining table, which Cory imported from Belgium. “Mixing natural tones, textures and various eras pulls the dining area together,” he says. “The chairs are slip-covered in machine-washable Belgian linen, so they’re easy  to keep clean.” 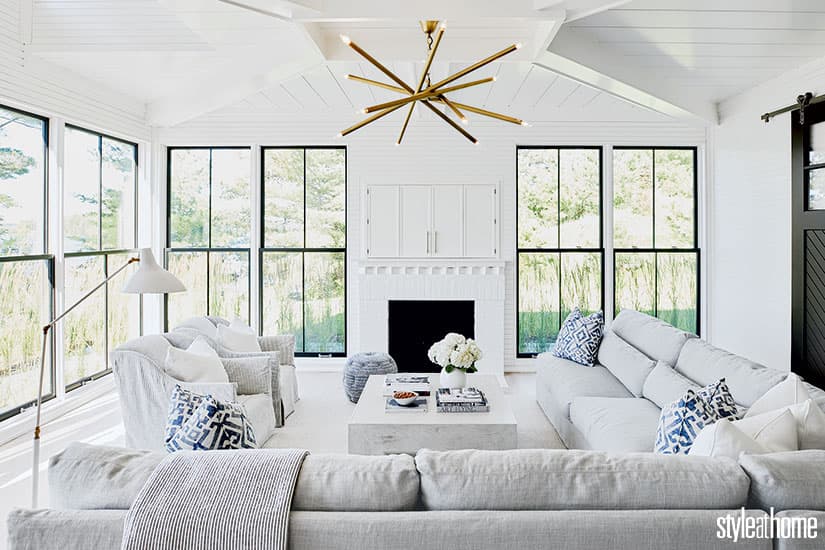 In this sitting area, the formality of the intricate ceiling and brass-toned chandelier is tempered by casual slip-covered chairs and an inviting sectional. “I selected furnishings that are current but still exude that relaxed cottage vibe,” says Cory. He disguised the TV over the fireplace with white cabinetry. 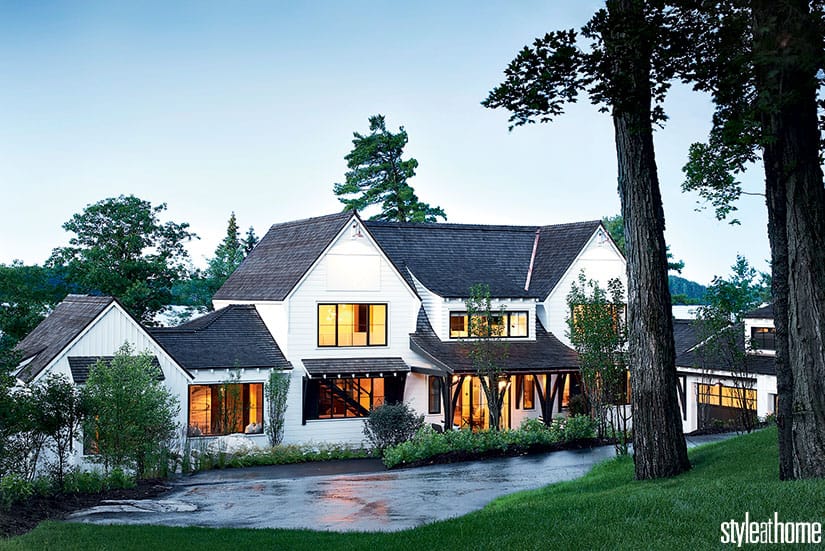 Meticulous landscaping and natural elements like stone and cedar ensure this cottage complements its picturesque surroundings. “We wanted it to look like it’s been present with the land for years,” says Cory. 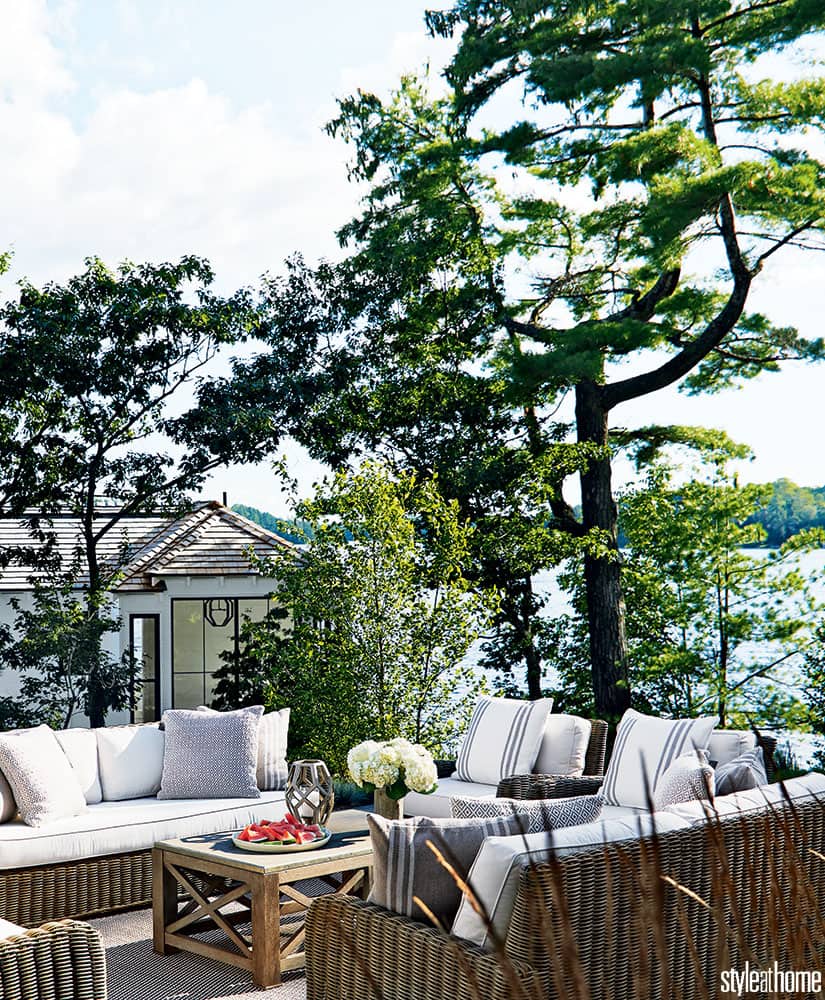 Positioned between the main building and the boathouse, this deck offers a cozy panoramic perch overlooking Lake Rosseau.

A Muskoka cottage with a contemporary take on traditional lakeside living