Trendy meets traditional in this family home built from scratch.


When you’re a designer who specializes in hip eateries, it’s natural to be nervous about designing your first home, especially when it comes to the kitchen. “I definitely felt a lot of pressure because I’m known for my work in the restaurant business,” says Tanya Krpan, design director for the popular North American restaurant chain Earls Kitchen + Bar. Throw in a spouse, Jure, who happens to be a builder and a baby on the way and you’ve almost got the makings of a reality show. But this one has a happy ending: “I did most of the interior, and Jure handled the construction,” says Tanya. “We worked well together.”

That was four years ago. Now, Tanya and Jure have three children – Ivan, 3, Cruz, 2, and five-month-old Belle – to fill up the 3,500-square-foot home that was their first co-production. The five-bedroom, six-bathroom house in Richmond, B.C., represents the couple’s shared vision. “We wanted a clean aesthetic with classic elements,” says Tanya. Though this might sound like a contradiction in terms, the neutral walls and black casement windows provide a fresh counterpoint to the home’s traditional panelling and coffered ceilings. 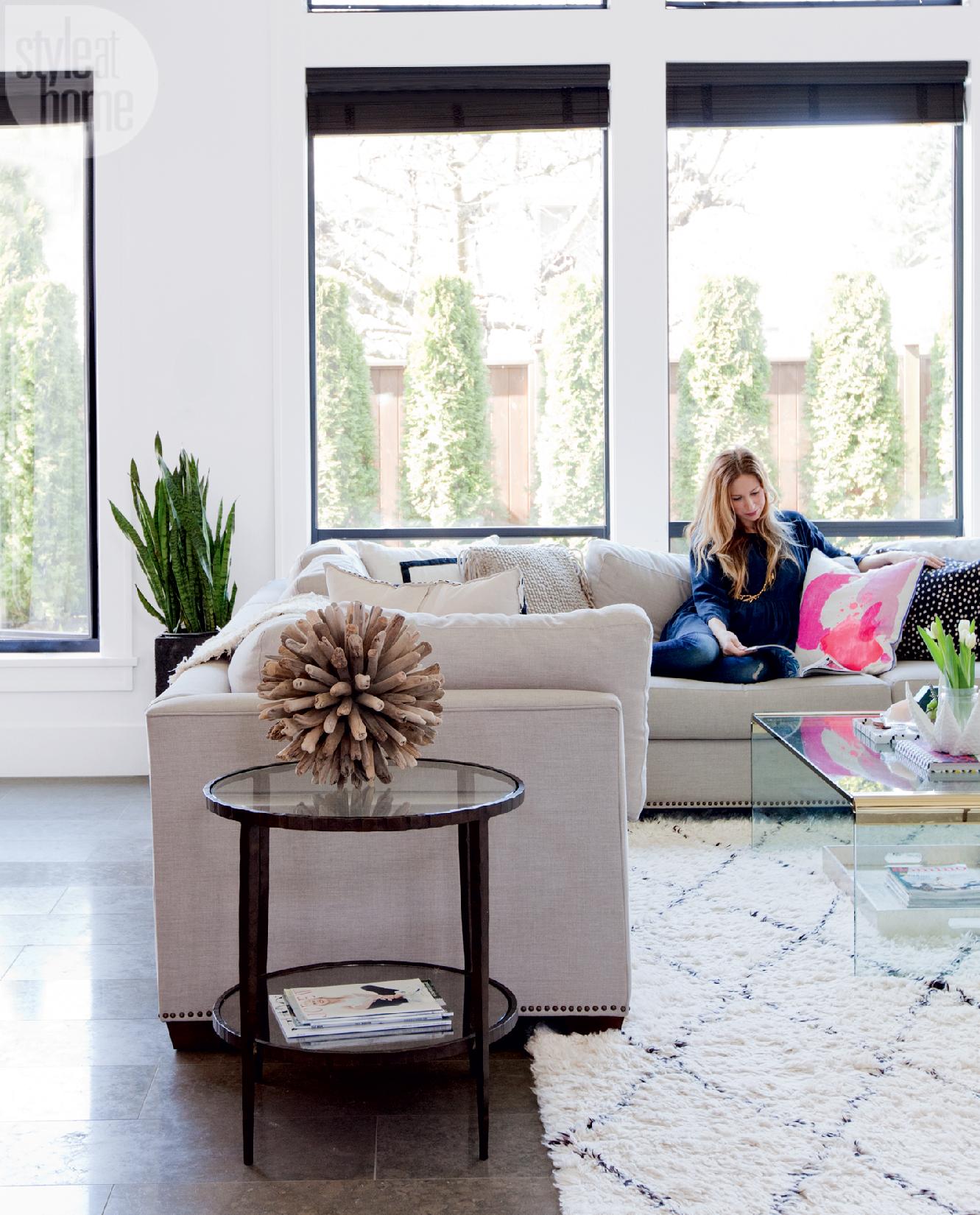 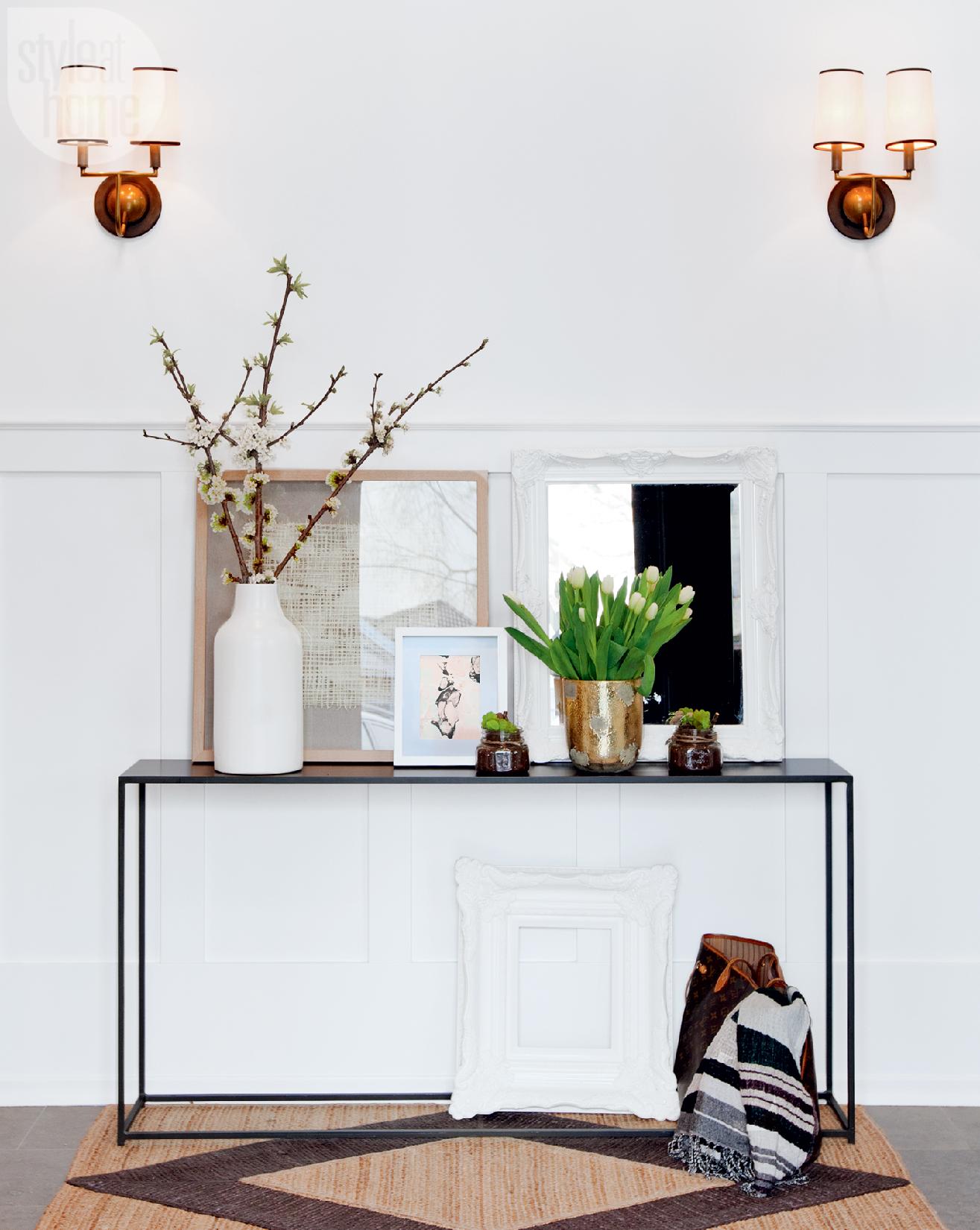 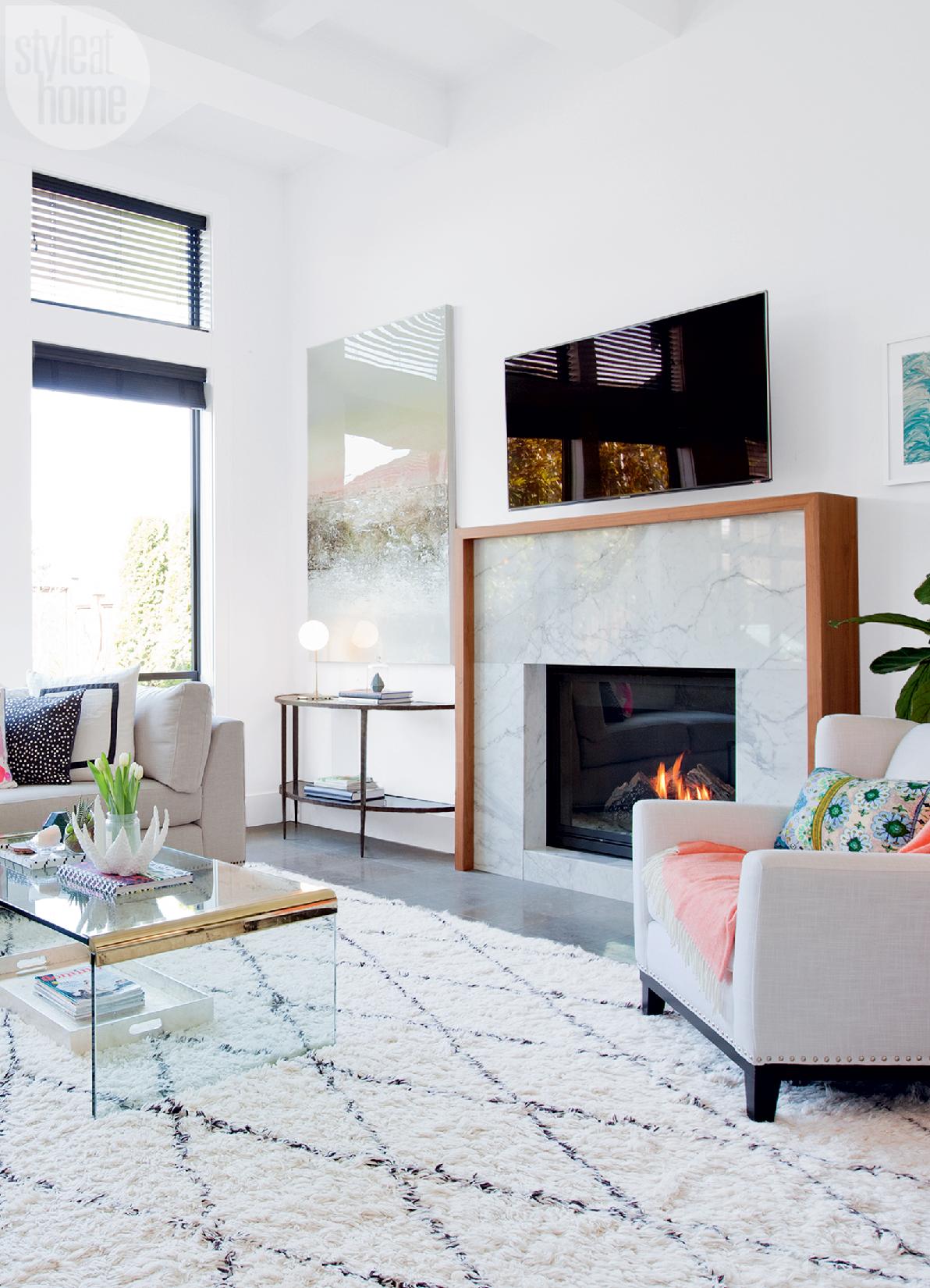 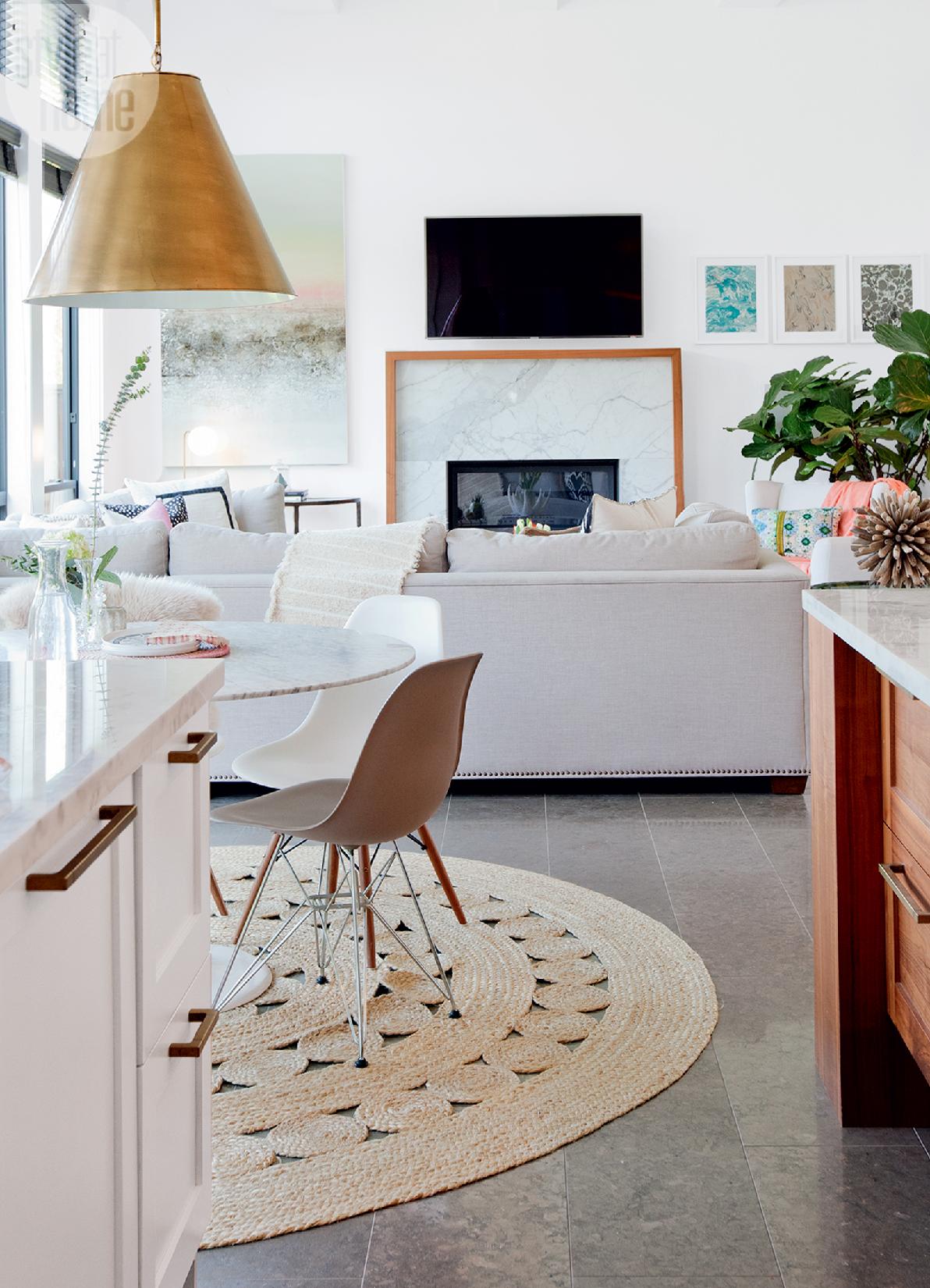 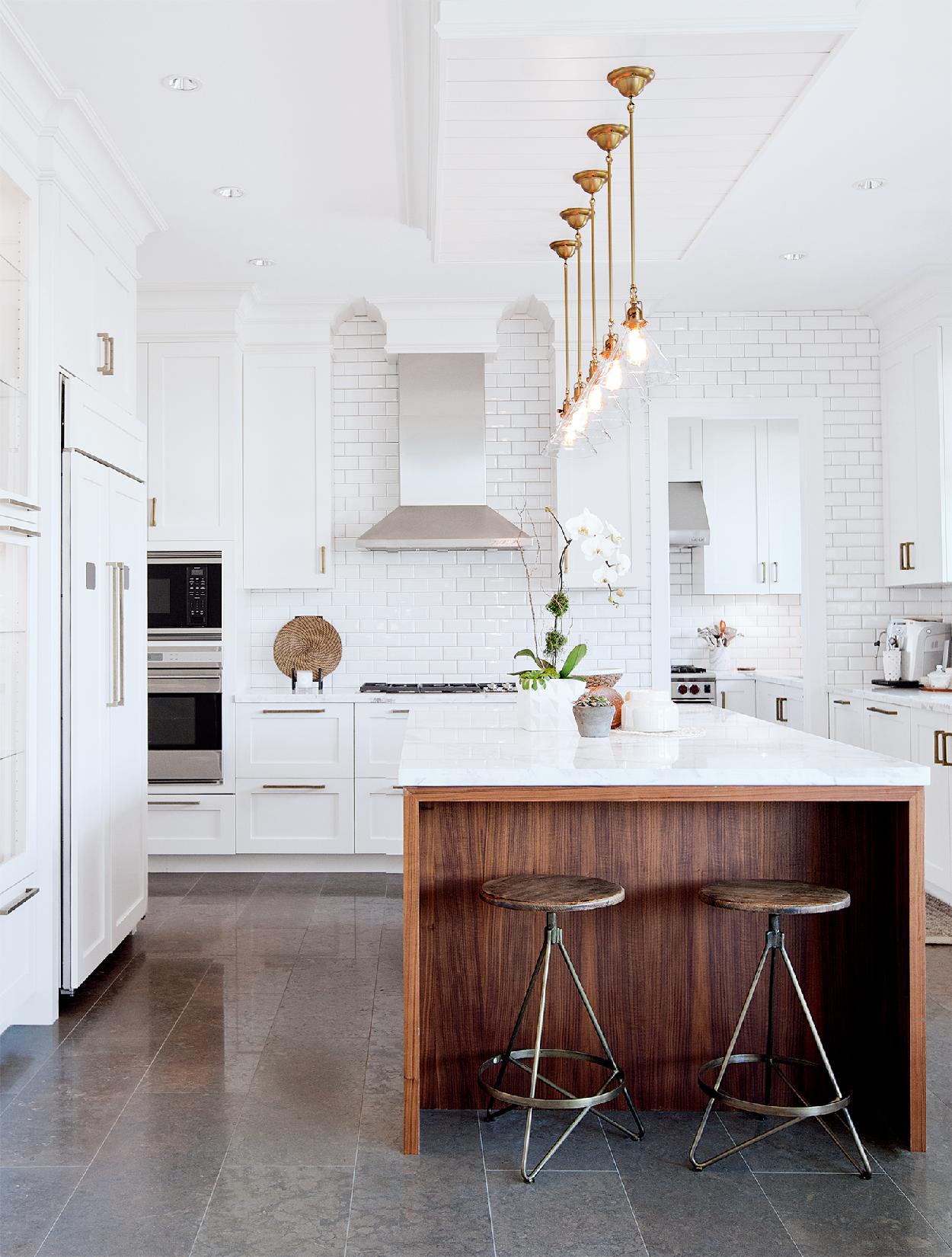 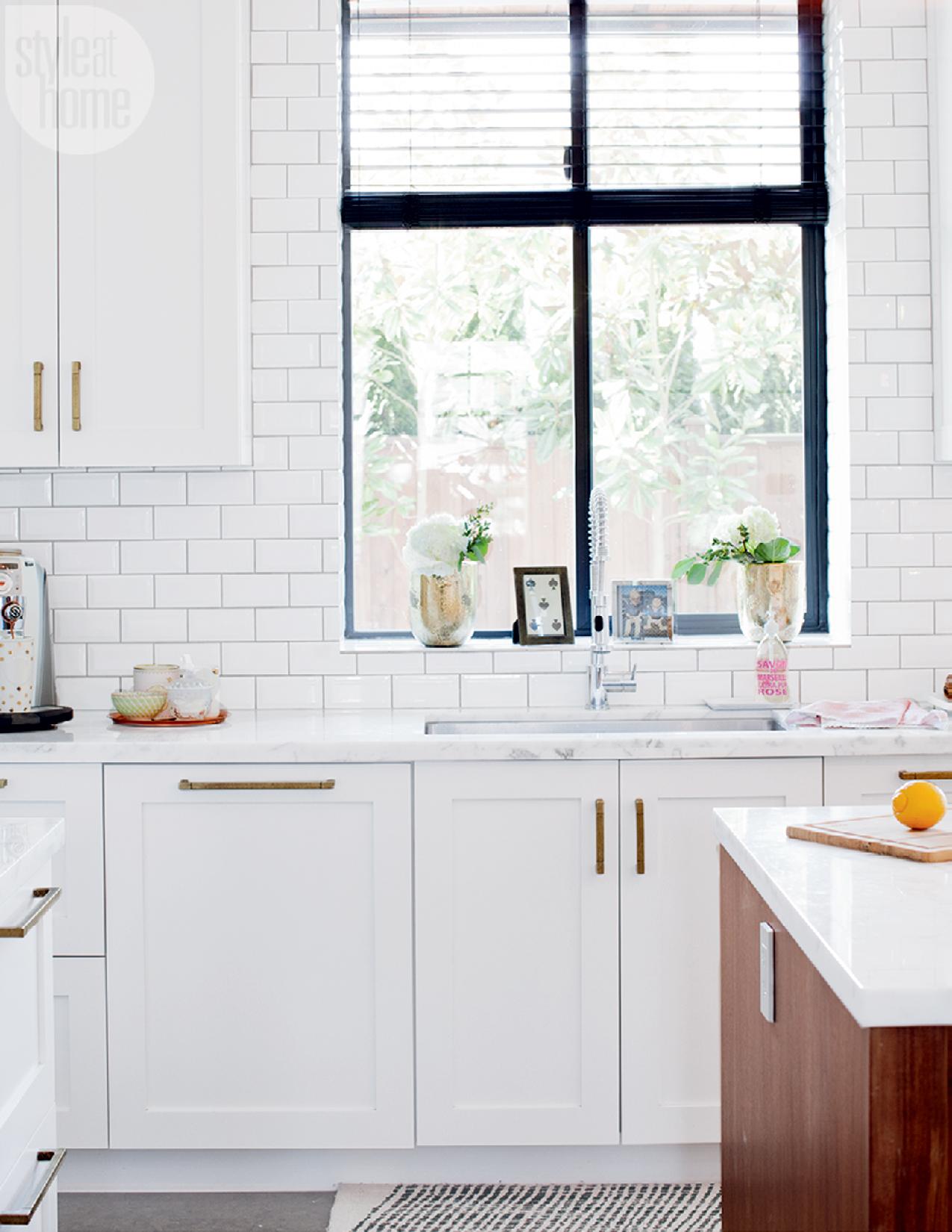 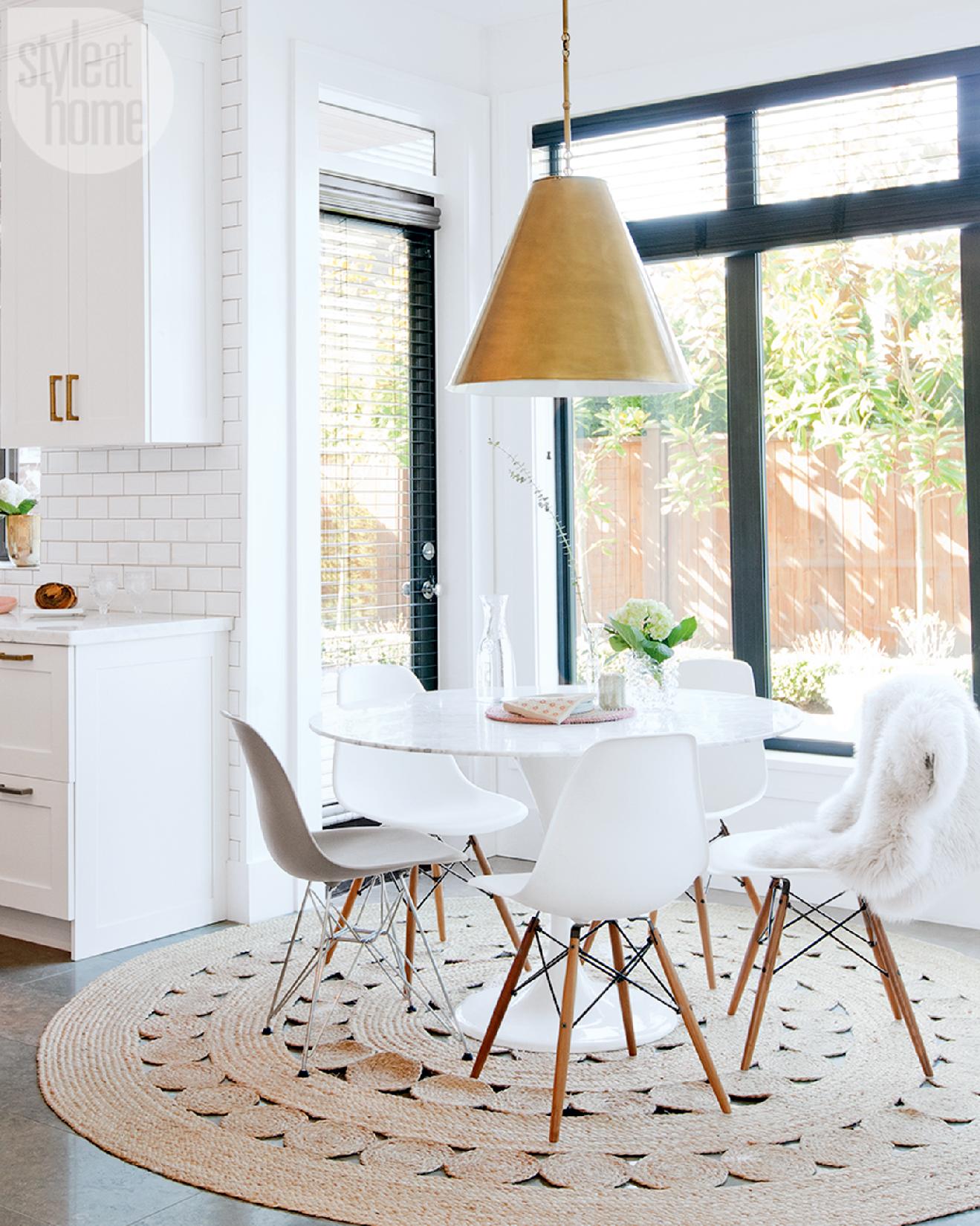 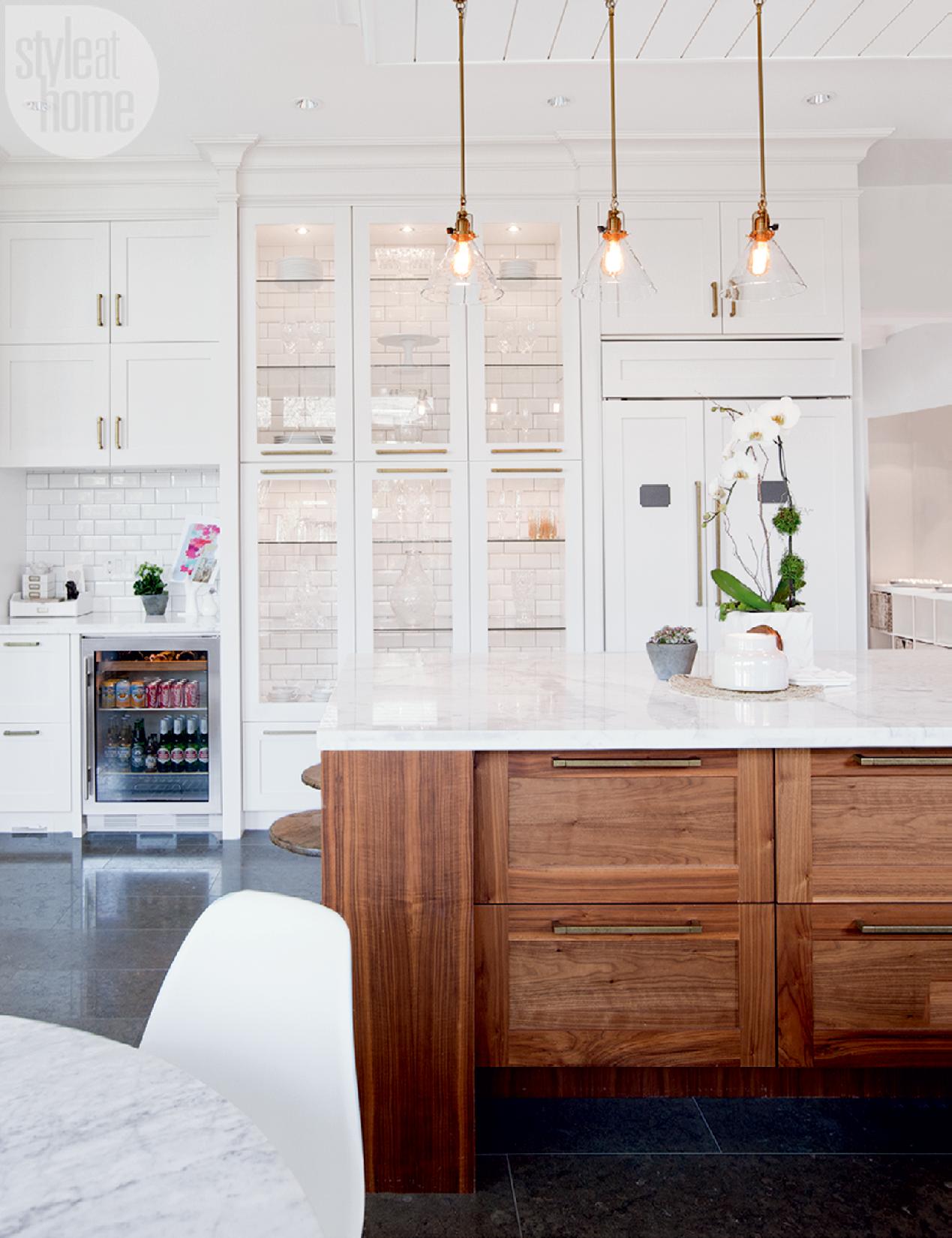 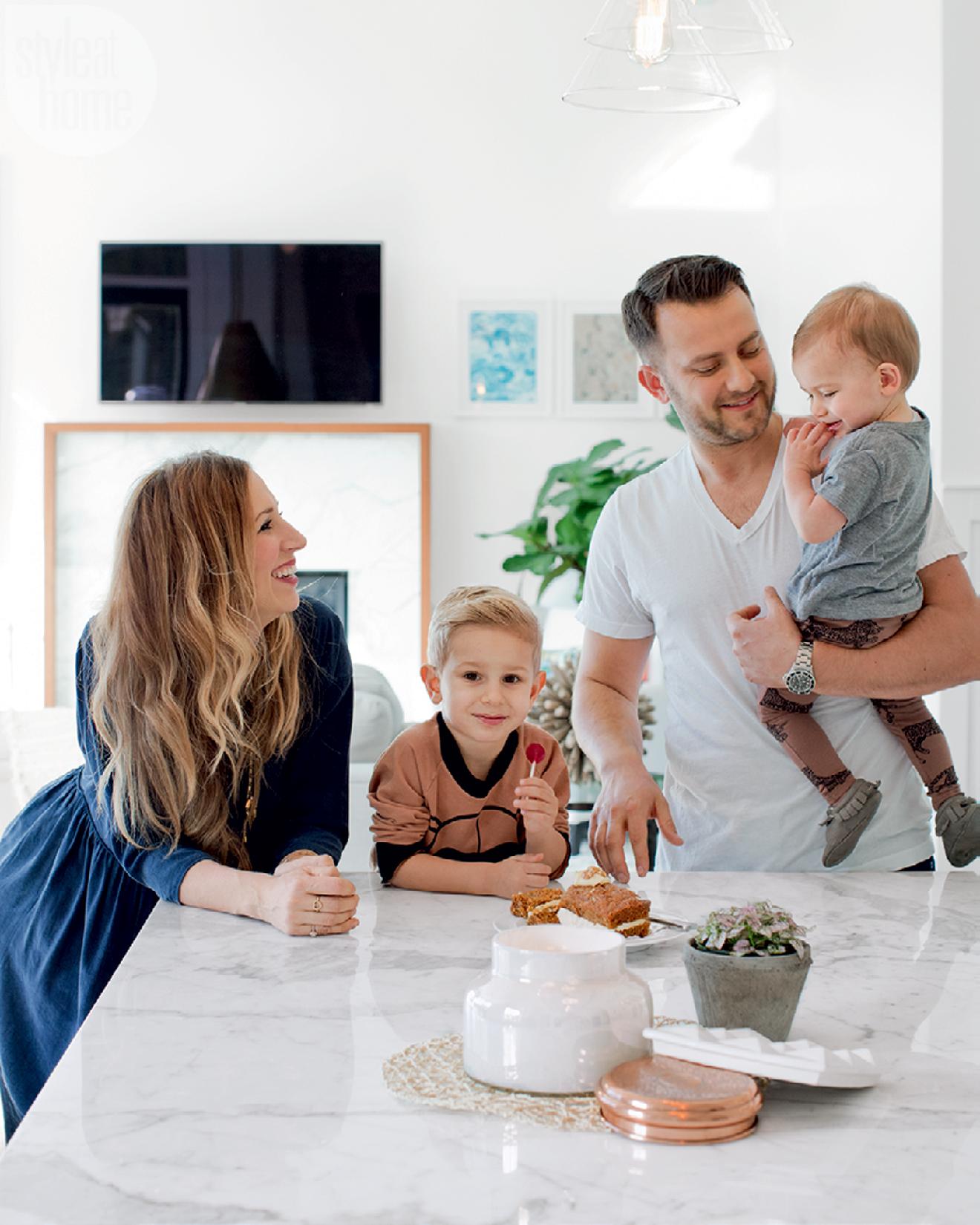 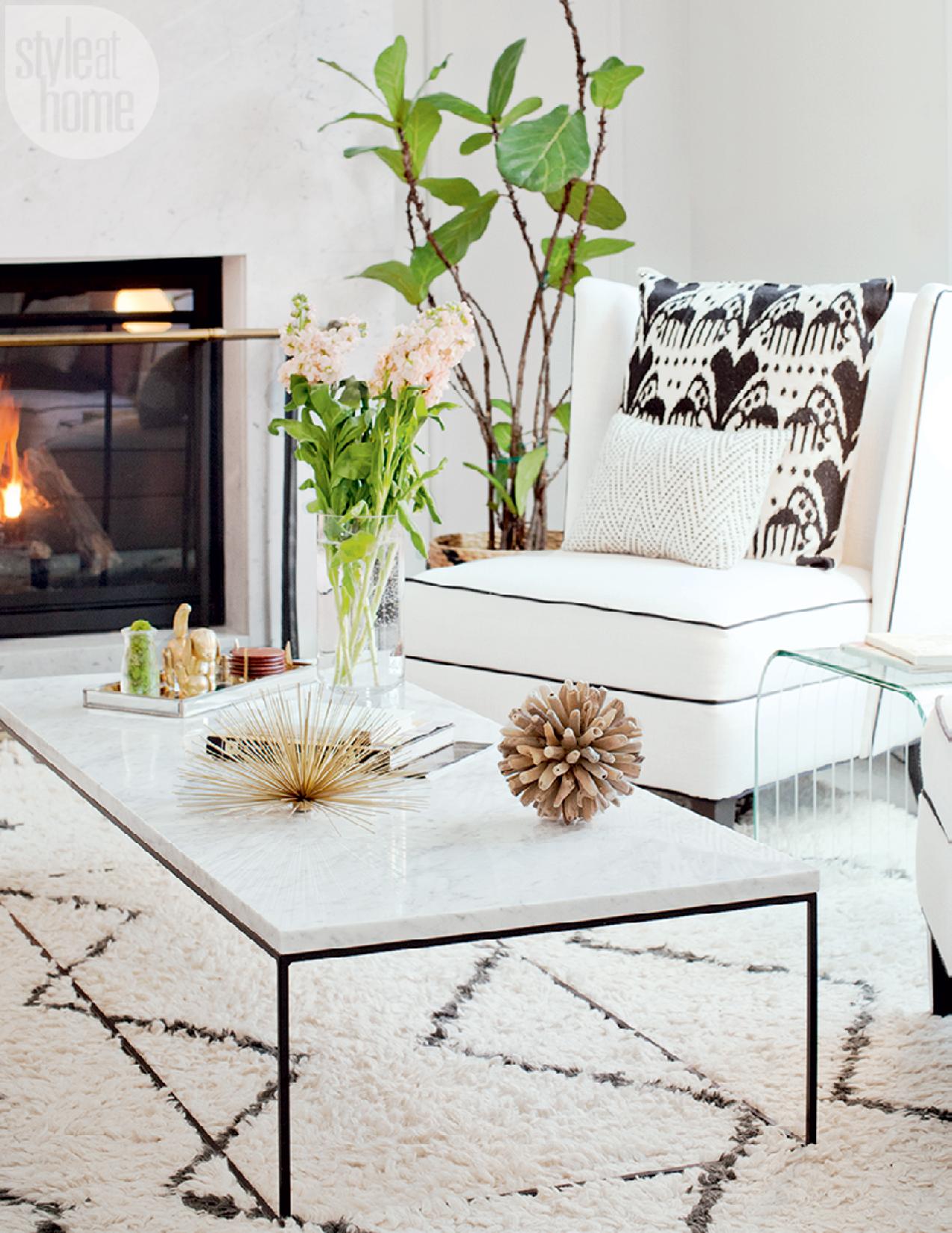 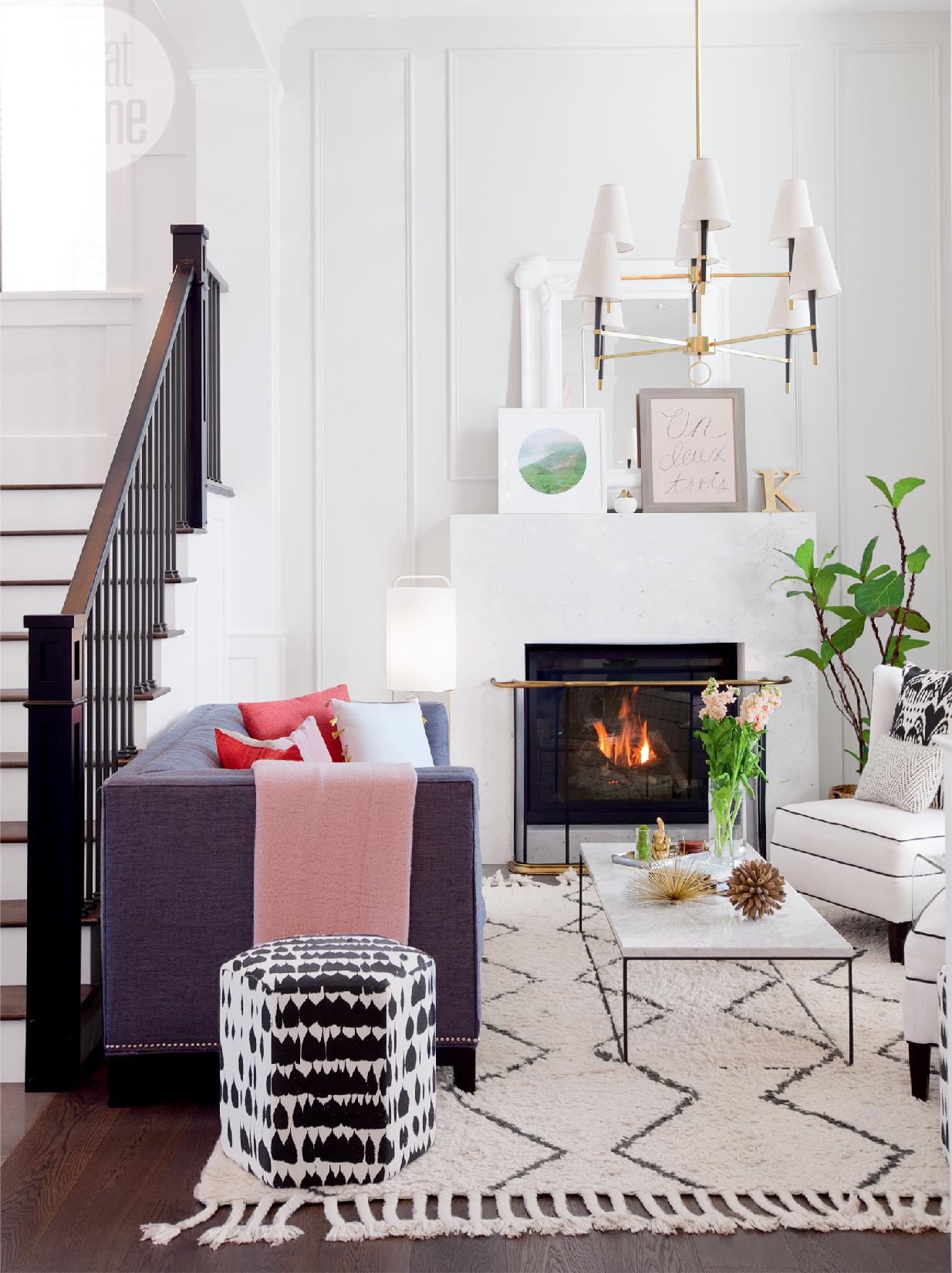 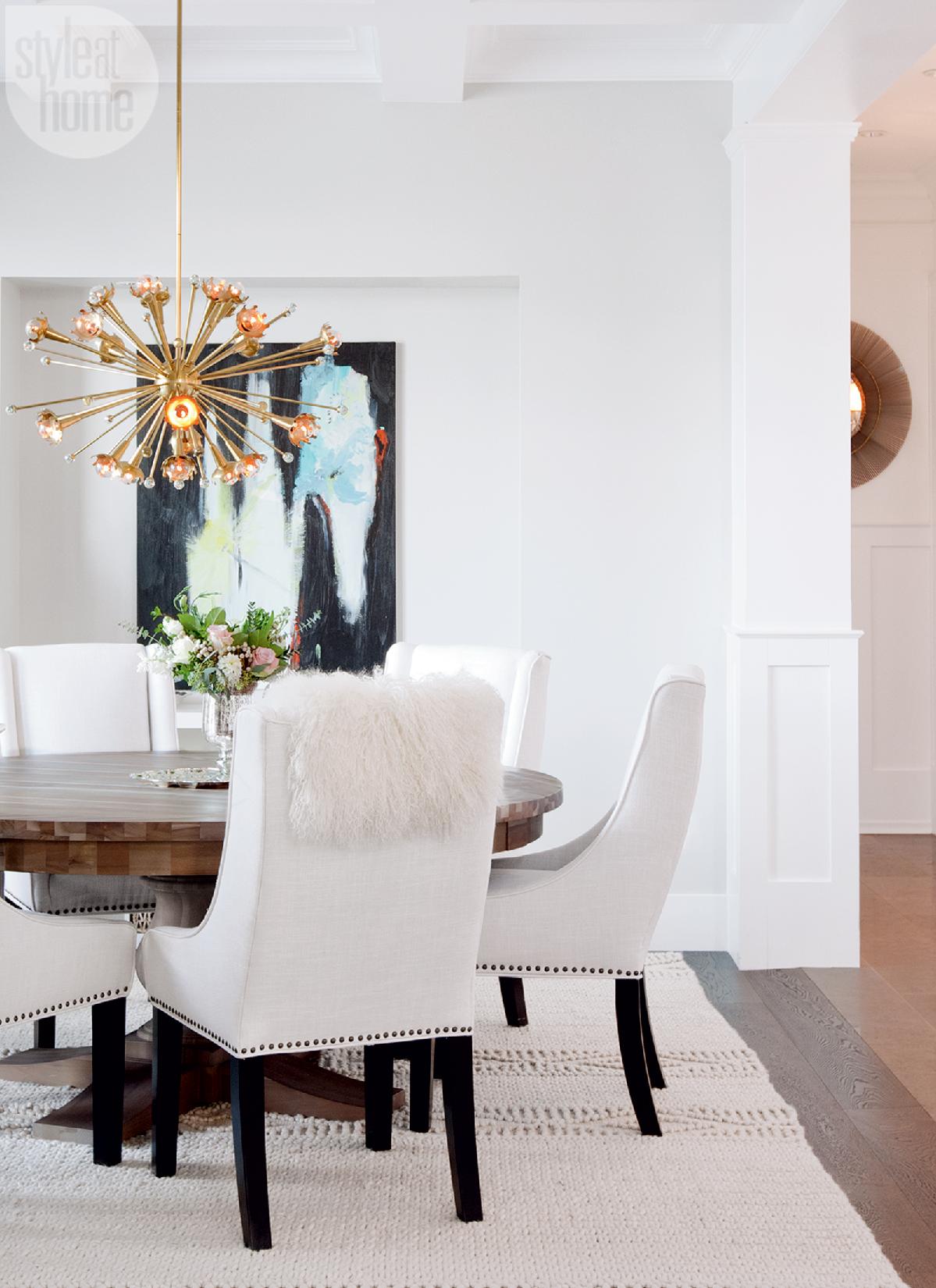 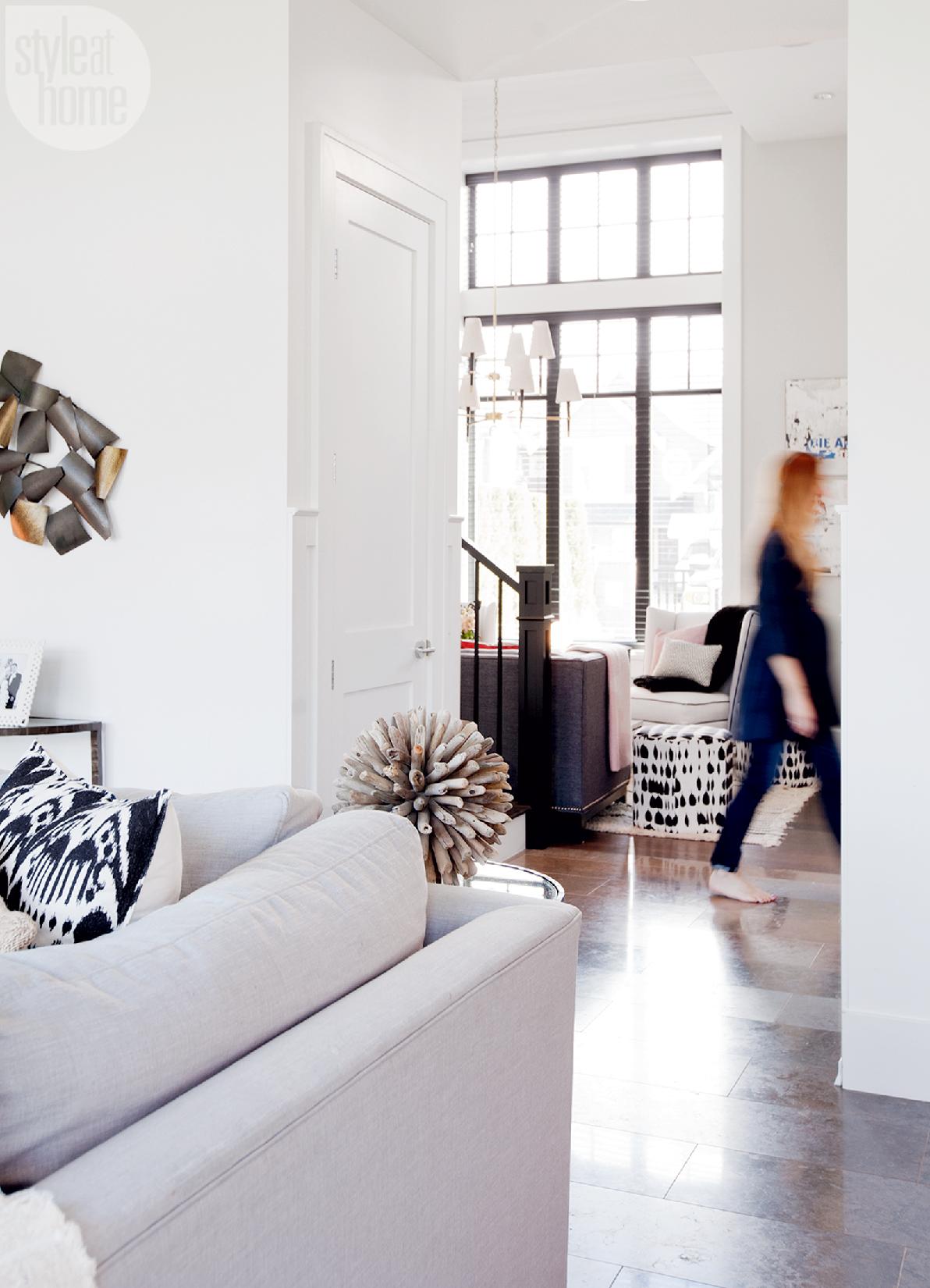 Tanya isn’t afraid to play with negative space, as seen in the home’s grand entryway. “Normally, you’d expect a mirror or big piece of art hanging above the wainscotting,” she says. Leaving the wall blank and layering small pieces on the console allows the millwork to shine.

Black casement windows and decorative accents create contrast in the neutral space. Tanya scored the vintage coffee table when her office was being redecorated.

The kitchen, of course, is the true star of the show. Tanya’s restaurant-design pedigree shines through in the room’s floor-to-ceiling tiles, mix of open and closed storage and high-end appliances. She opted for white Shaker-style cabinetry and warmed up the space with a walnut island and brass hardware statement lighting and fixtures.

Another bistro-inspired touch was her choice of dark honed-limestone tiles for most of the main floor. “The tile grounds the space since there’s an abundance of white everywhere,” Tanya explains. “And it’s proven great for hiding dirt.”

Everything in the Krpans’ home is designed for everyday life and entertaining, from the large sectional in the family room to the round tables in the dining room and the kitchen’s eat-in area. “It’s more social to sit at a round table,” says Tanya. “You see everyone’s faces.”

Cabinets with glass doors allow Tanya to display her favourite serving pieces and special glassware. She had the back of the kitchen cabinets tiled to highlight this focal point of the kitchen.

Tanya and Jure – with their sons, Ivan, 3, and Cruz, 2 – have recently welcomed a baby girl named Belle.

Brightening up the space

The living room’s crisp white, grey and black scheme gets an energy boost from fresh greenery, pops of pink and plenty of pattern – check out the Moroccan-style rug, the ikat-print and chevron-patterned toss cushions and the graphic stool fabric.

Feminine accessories on a budget

To offset the costs of the more expensive permanent elements, Tanya was meticulous with her decorating budget. She incorporated secondhand pieces, such as the family room coffee table, and sourced inexpensive art for the living room mantel. Affordable colourful accessories add youthful edginess to the living spaces. “I love the femininity that the splashes of pink add to the living room and family room,” she says. “Plus, by the time I got to the decorating, I was living with three boys!”

In the dining room, Tanya likes the juxtaposition of the modern Sputnik-inspired chandelier with the traditional coffered ceiling. The artwork was a DIY project Tanya and Jure painted together on her 30th birthday.

Though this house has been well loved for years, there’s a sequel in the works: Tanya and Jure are in the process of building a new home. “We’ll keep some of the same elements but go a little more modern in the kitchen,” says Tanya. We’ll definitely stay tuned.