A once tiny starter house is transformed into one family's dream home.

A young family goes from starter home to forever home – without moving! – thanks to two talented and trustworthy designers.

How to Build Your Dream House 101, a case study. Lesson One: Start from the ground up. When these homeowners (he’s a lawyer, she’s a nutritionist and stay-at-home mom) realized that the tiny Vancouver bungalow they’d been living in for the past 12 years was far too small for their family (which includes two growing boys, aged 9 and 10), they had it bulldozed. They loved their lot, but the home had never been renovated, and the foundation footprint needed to be expanded before they could go bigger – so demolition was the obvious option.

Lesson Two: Understand exactly what your dream house entails. Having lived on the property for more than a decade, the homeowners had crystal-clear ideas about how to make the most of the ample light and stunning views. Plus, they analyzed their lifestyle and knew what it demanded – a large open-concept living space (so the family could be close even when they’re not in the same room); plenty of über-organized storage (since this super-sporty gang bikes, skis, swims and plays soccer); a quiet area away from the kids (because, well, kids); and a kitted-out kitchen for the wife, who’s an avid home chef.

Lesson Three (and perhaps the most important of them all): Hire people you trust to deliver the dream. Enter Sophie Burke, whose sister introduced her to the wife (they’re friends). “I felt Sophie would understand the needs of a young family and not make things too precious,” says the wife. “I had seen her clean, elegant and sophisticated style on her Pinterest boards and in other projects she’d done and just knew that if I couldn’t decide on something, I’d be happy with her choices.”

Sophie and the project’s lead designer, Jennifer Millar, were involved from the start – from recommending an architect to build the 2,800-square-foot four-bedroom house to shopping for its finishing touches. “Both designers are smart and talented, and I was always impressed with their selections – unique and interesting yet unfussy,” says the wife. “How could I not trust them?”

With carte blanche to create the family’s dream home, Sophie and Jennifer set about creating a traditional aesthetic (which ties in the exterior architecture) with a clean, contemporary character. “Finding the right balance between the two styles was one of the biggest challenges for us,” says Sophie. But the timeless and trendy palette of black, white and grey used throughout the space helped unify it all. In the open-concept family room, dining area and kitchen, old-world touches like window casings, wall panelling and thick baseboards are tempered by sleek simple-lined furnishings and punched up by of-the-moment elements, such as herringbone tiles, brass hardware, Mid-Century Modern pieces and industrial light fixtures.

The designers also delivered all the practical features the homeowners sought: a quiet sitting room closed-off from the rest of the house, ample storage to accommodate all the kitchen gadgets and sports gear, a separate upstairs bathroom for the boys and a rec room and laundry room in the basement. In addition to the homeowners’ family-friendly requests, Sophie and Jennifer offered up another brilliant idea: to include an office nook in the family room so the kids would have a spot to complete their homework while remaining close to their parents. No doubt the homeowners will be thanking the designers for years to come – not only for delivering their dream home but also for anticipating needs they hadn’t considered. It goes to show how far the words “I trust you” can take you. That’s the best lesson we learned today. 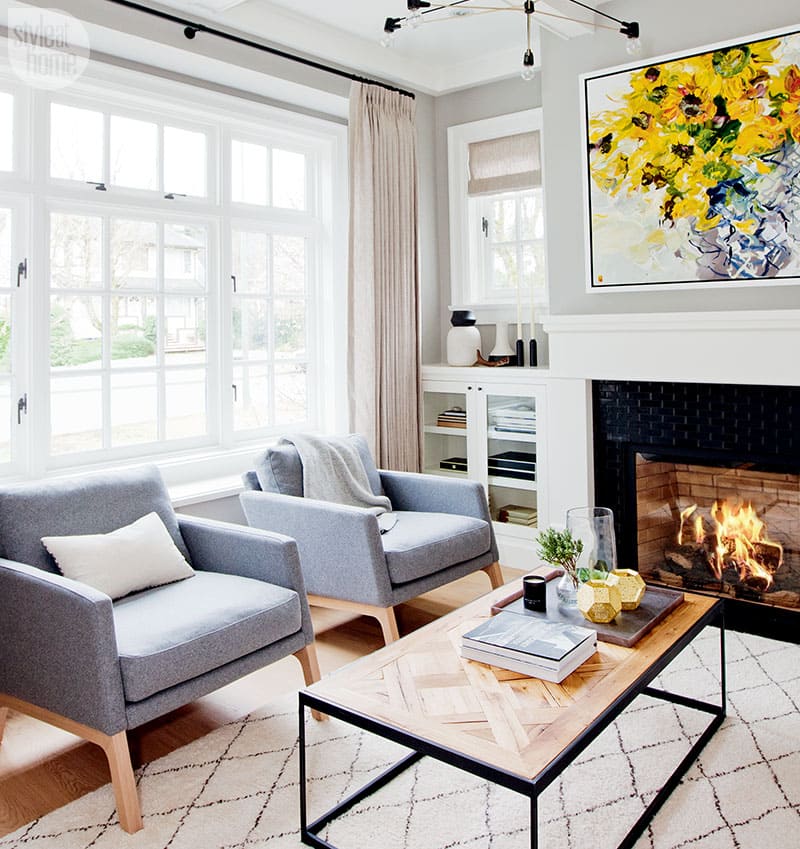 The small sitting room of this Vancouver home is closed off from the rest of the open-concept living space. A retreat where the family reads or the adults entertain, it’s a spot for solitude in this otherwise ultra-active household. 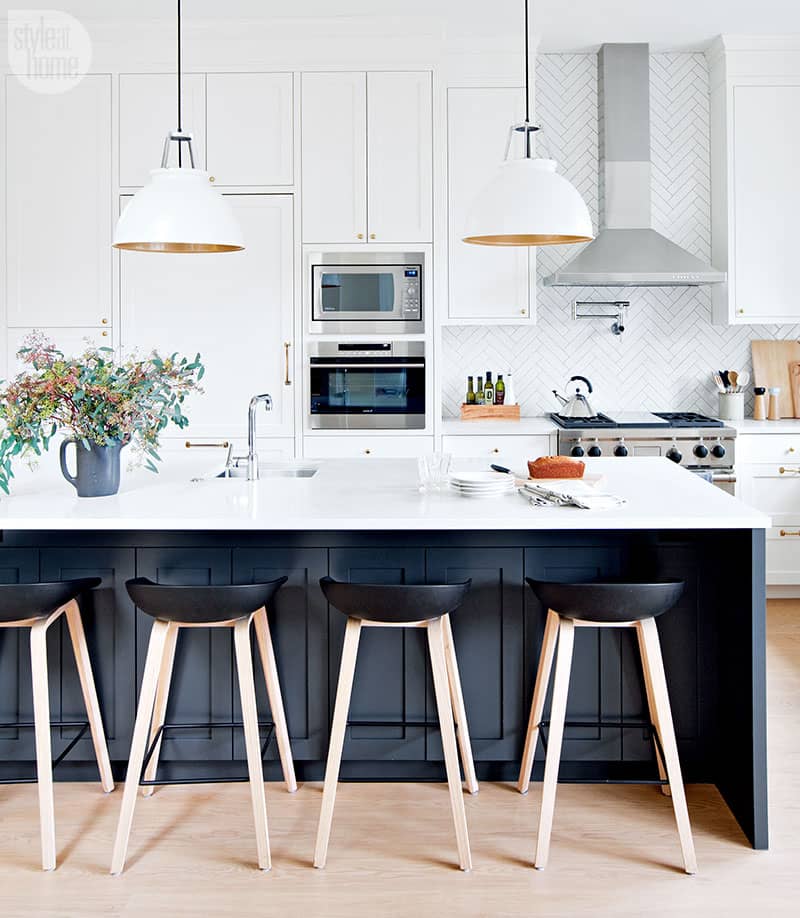 “The homeowner is a really talented baker and cook. Her former kitchen was teeny tiny and cut off from the rest of the house, but she still came up with incredible creations,” raves designer Sophie Burke. In the sprawling new space, with its ample storage, second oven and magic corner (to name just a few highlights), we can only imagine the meals this home chef now creates! (Drool....) 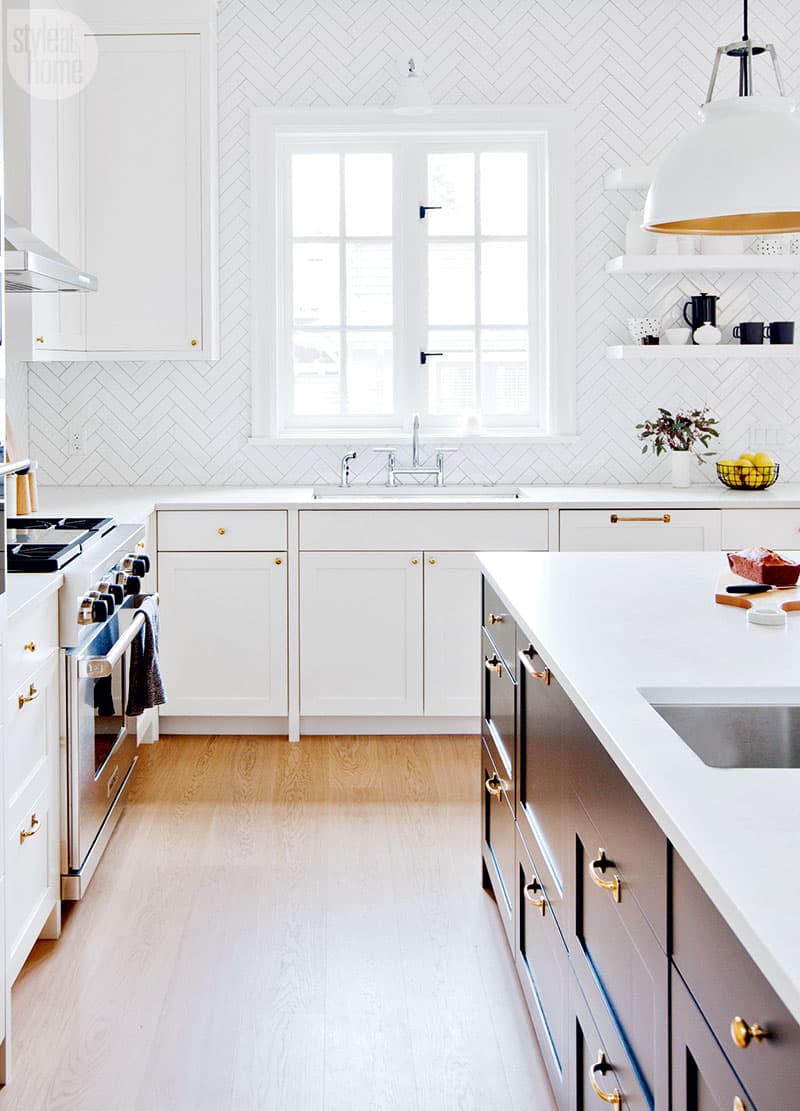 The kitchen’s herringbone-tiled walls offer a dramatic yet subtle look.The trendy pattern is grouted in grey for a more vintage vibe – a testament to the interplay of new world and old in the house. 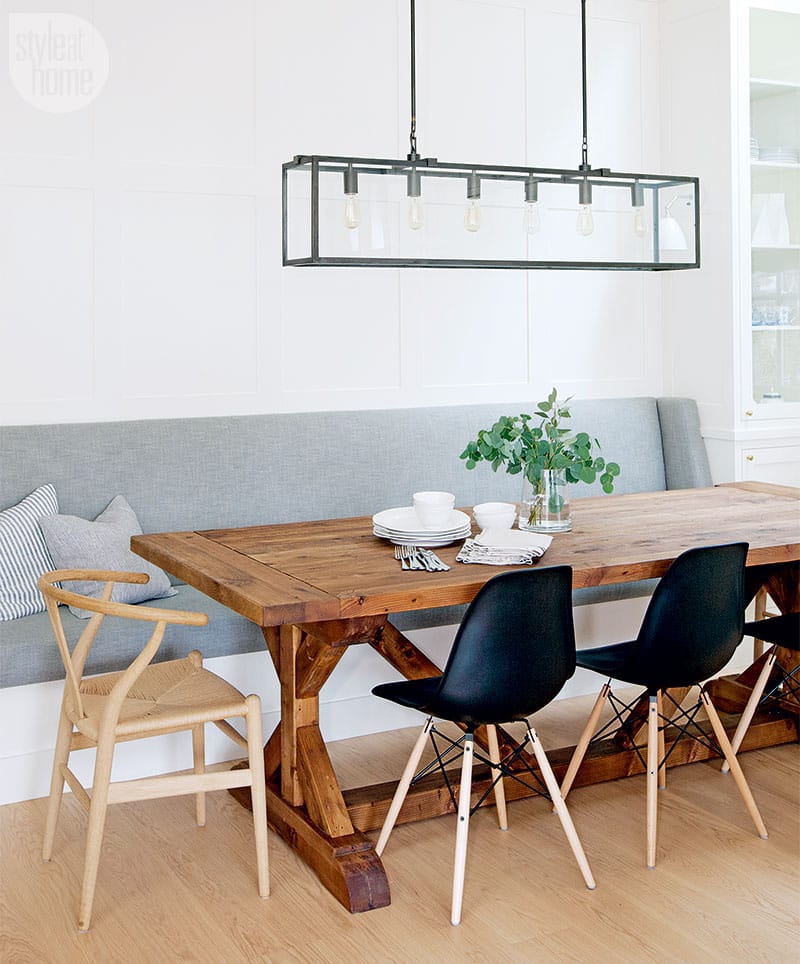 The family didn’t need a formal dining room, but they did desire a large space for hosting holiday dinners. So Sophie and her colleague, Jennifer Millar, selected a dining table that can extend to seat 16 and stashed an extra pair of chairs in the boys’ rooms to accommodate more bums. The striking light fixture lends the perfect industrial edge to the panelled wall. “Jennifer is a genius at sourcing lighting,” says Sophie. 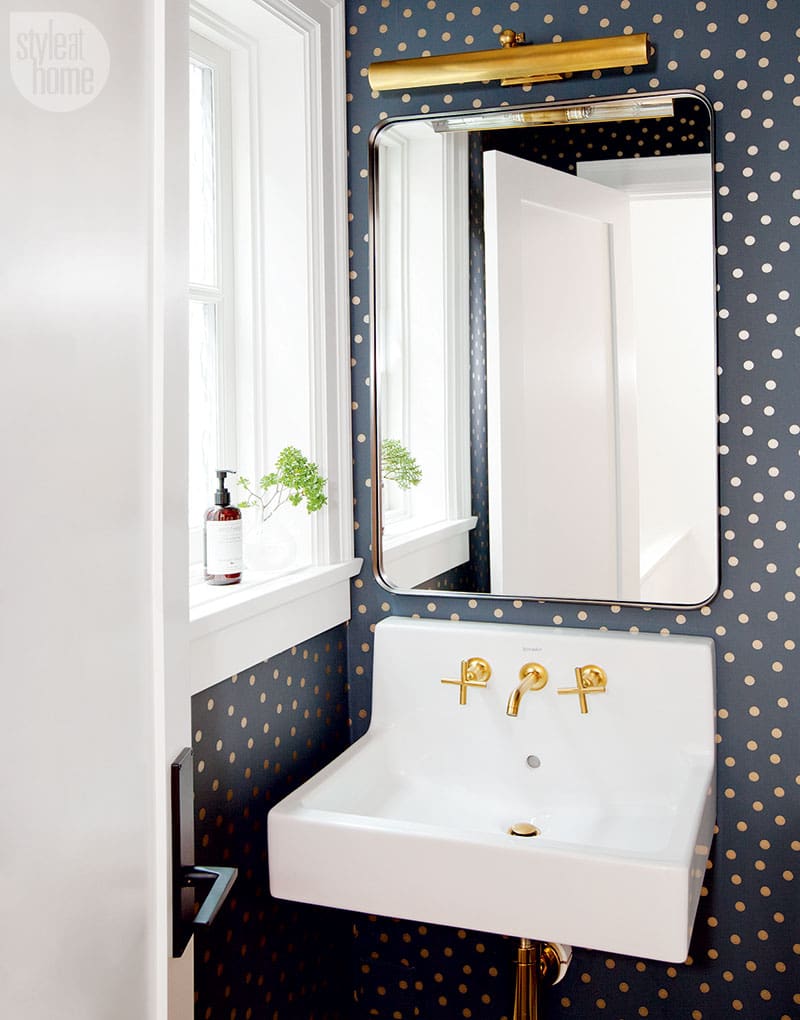 “We just went all in,” says Sophie of covering the main-floor powder room walls in chic gold polka-dot wallpaper. While the brass picture light and faucet follow suit, the simple mirror and sink temper all the glitz and glam. 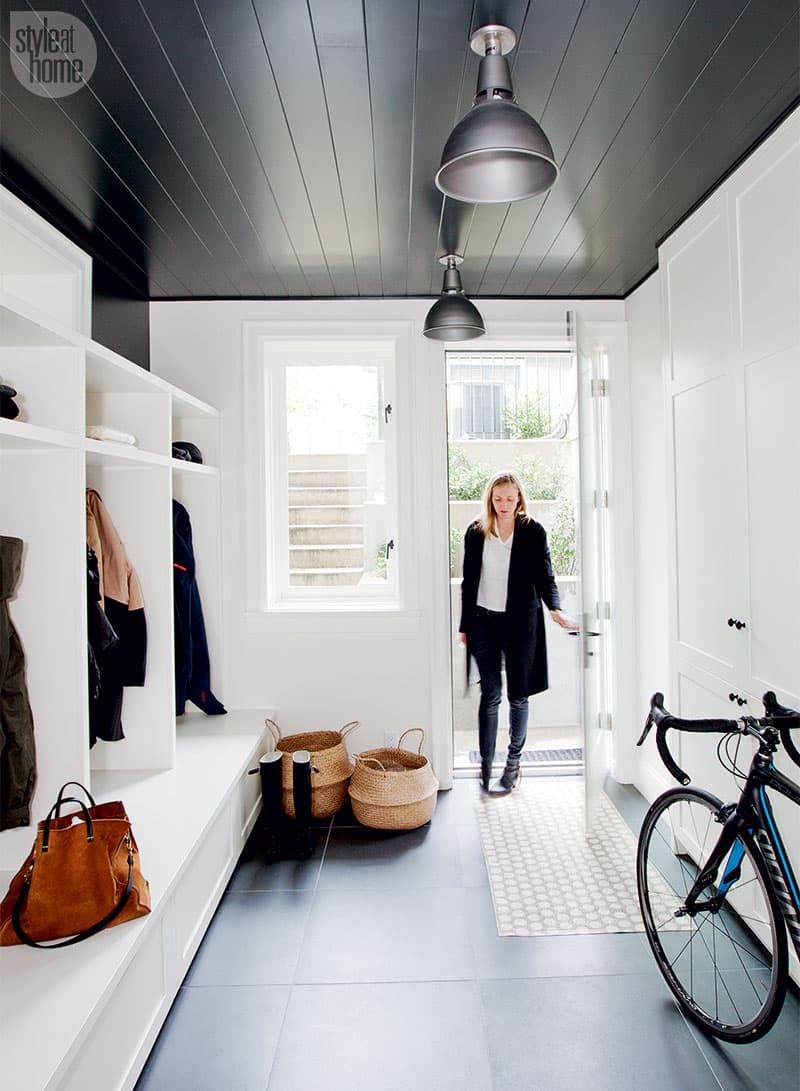 With a cubby for each family member along one wall and meticulously laid-out closets on the other, the mud room is an ultra-organized treat for the active family. The cozy family room, which has its own office area, is open to the kitchen so the homeowners can keep an eye on the kids, whether they’re doing homework or watching TV. 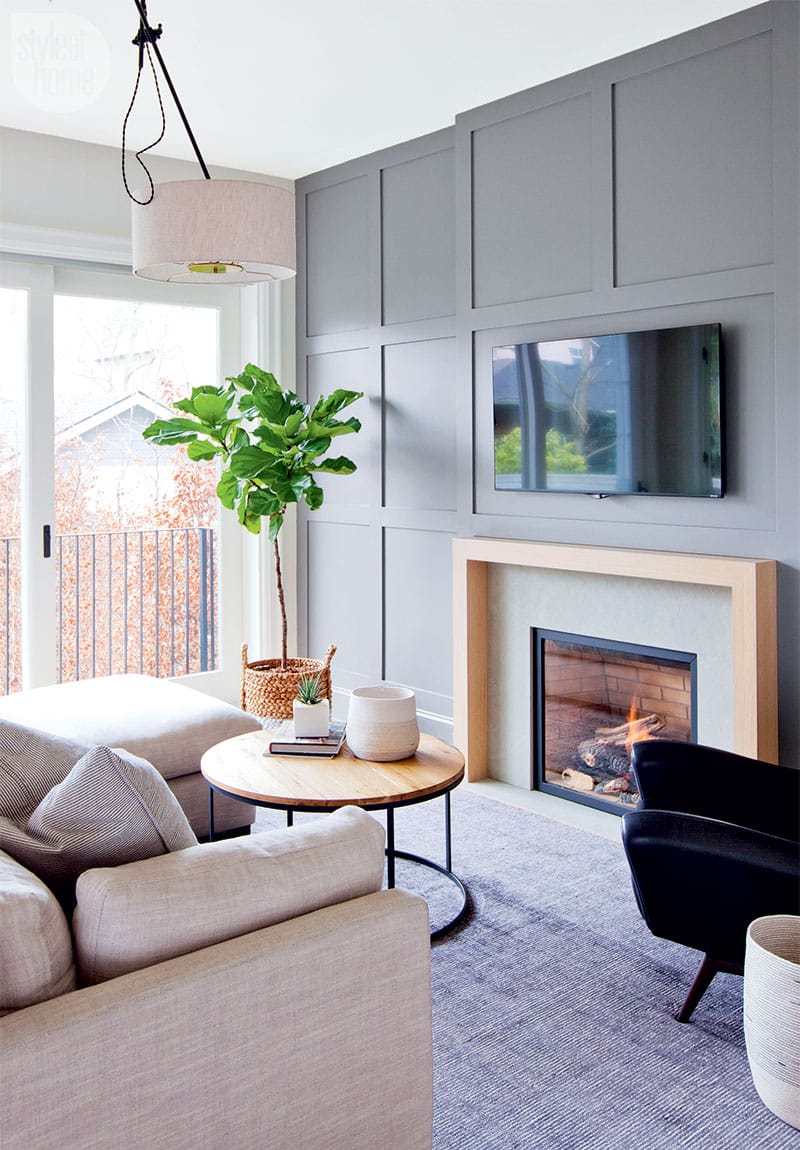 Grey paint not only modernizes the traditional panelled wall but also blends in with the TV. 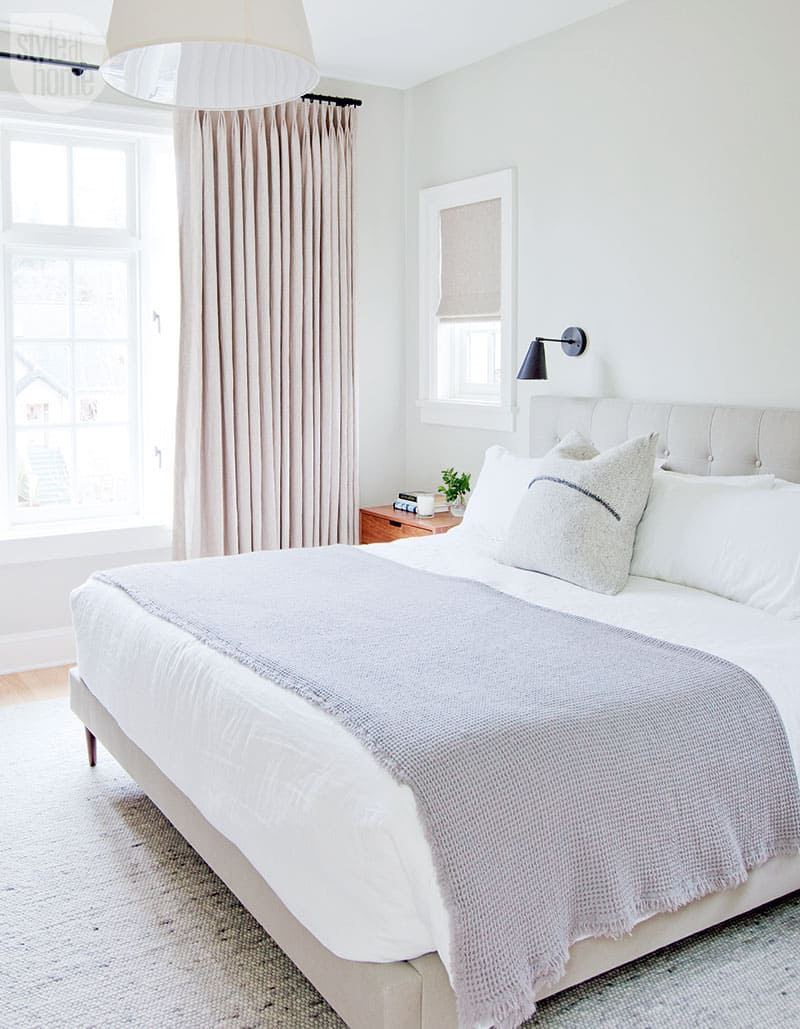 Simple, serene and pared back, the master bedroom, with its layered textures and neutral hues, is one of the most feminine rooms in the house, says Sophie.

A Vancouver family remodels their starter house into their dream home