A light-filled country ranch offers room for the whole family, even the members with four legs.

A city house is fine for a couple of chihuahuas, but pets with nostrils the size of apples need breathing room.

With nine horses and three big dogs, this empty nester needed more space. She was living near the Southlands, a community on the west side of Vancouver that, though pretty, lacked the land needed for her horses to really get their trot on.

She always fantasized about moving to a rural setting, and this patch of paradise in Langley, B.C., fit the bill. Located on four verdant acres, the property is conveniently next door to the homeowner’s eldest daughter, who is also an equestrian. When the place went up for sale, she seized the opportunity and made an offer.

“This was the awesome acreage I had dreamed of owning, where I could have my animals right where I live,” she says. “In the city, I had to go to a barn to ride. But here, I look out my window and see horses – it’s a dream come true.” 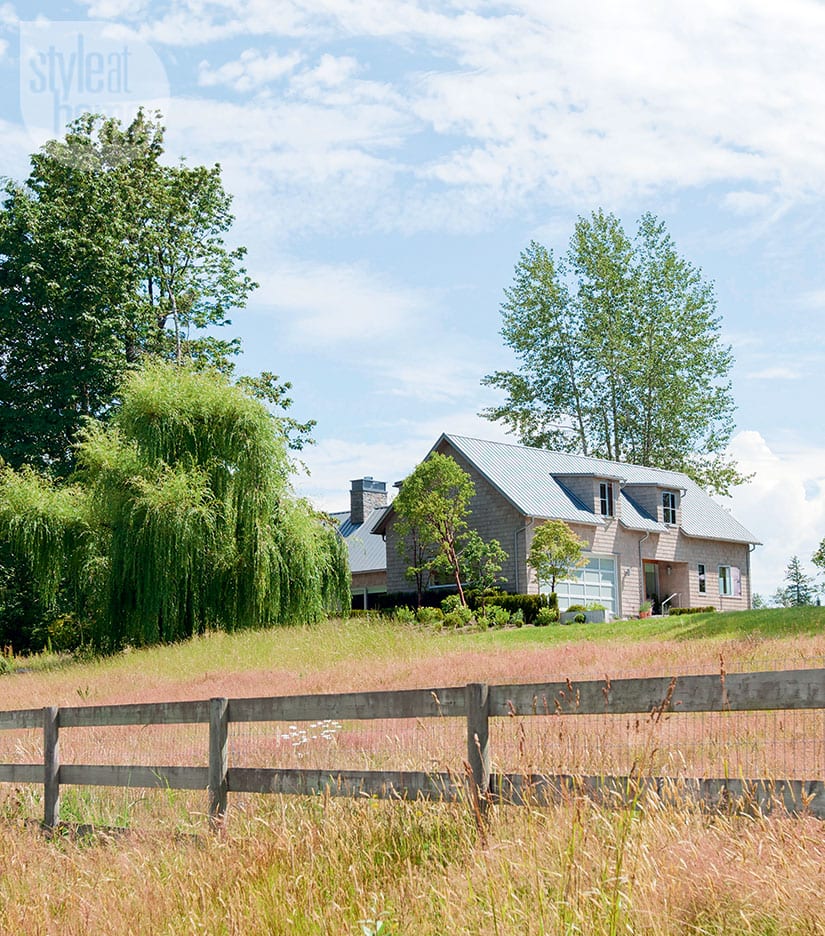 “The farmhouse on the property, with its wraparound veranda, was cute,” says the homeowner. “But it wasn’t well built.” Plus, it was two storeys, with the kitchen on the upper floor. “I’m 67 years old – I don’t want to be doing too many stairs!” she says with a laugh.

And so she decided to build a house from scratch. On a friend’s recommendation, she tapped local designer Scott Posno for the project. Known for his airy contemporary abodes, the custom-home designer brought the same sensibility here: Lean and unassuming, the 3,200-square-foot grey-shingled ranch respectfully blends into the landscape. It sits next to a charming old red barn that was retained during the year-long overhaul that commenced in spring 2014.

Indoors, it’s all about the open-concept layout. “We were after a ground-oriented house that came from the client’s wish to be able to walk directly outside from any room without the interruption of stairs,” says Scott. Patios situated off both sides of the main living area (which has an exposed cathedral ceiling that soars to an incredible 20 feet) blur the line between inside and out. “There are nine sets of glass doors off the main-floor living areas alone,” Scott adds.

This abundance of glass ensures natural light blissfully fills the home. There’s always a snippet of sun, sky and a sauntering horse or two in view, wherever one happens to be sitting.

The master bedroom and bath are on the main level, so Scott dedicated the second floor – boasting three bedrooms and two baths – to the homeowner’s five children and five grandkids, who visit often. “It never feels too crowded, even though we’re a big group,” she says.

For this tight-knit family, the roomy ranch is the fulfillment of a dream that started with their love of the countryside. “I’m so happy here,” says the homeowner. “I built this place so all the kids could come with their children and their dogs, because they all have big dogs, too,” she says. “There’s a great big pen for all of them to run around in. It’s a perfect spot for my family to vacation and enjoy country life.” 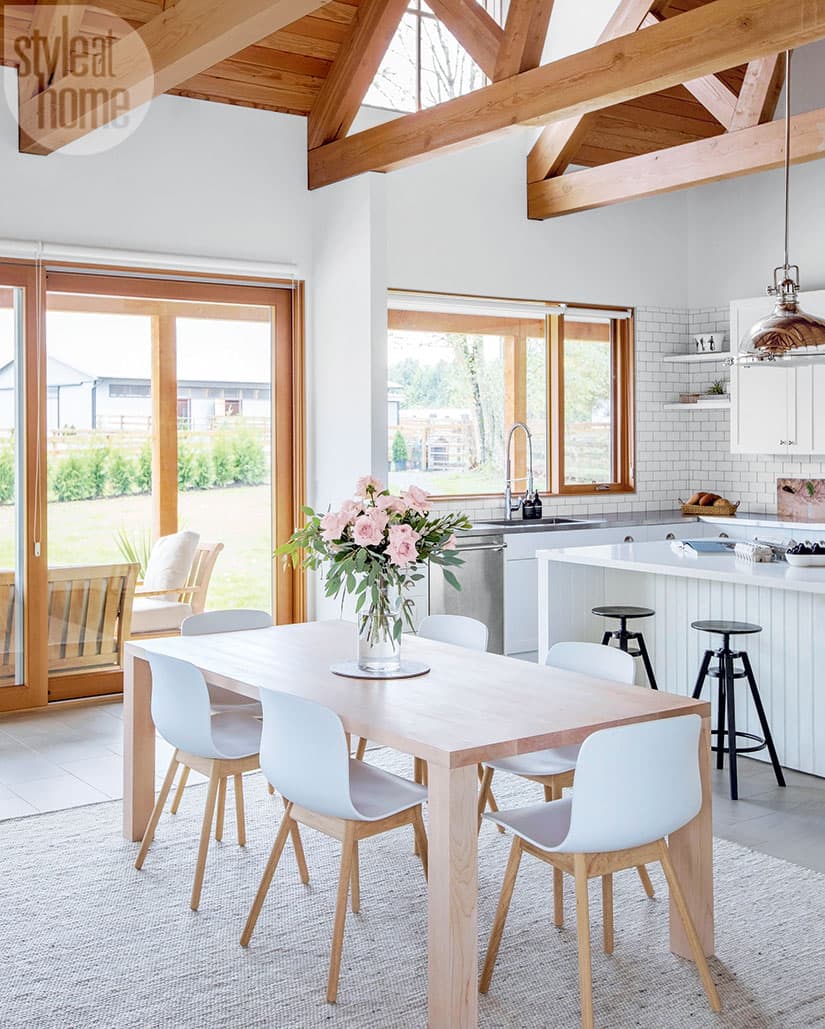 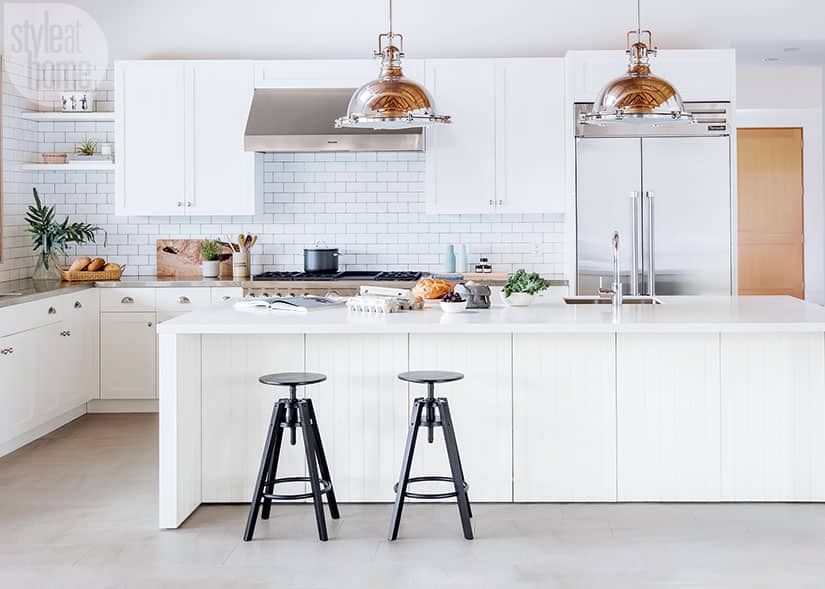 The sprawling kitchen has tons of room to entertain and move around when family visits. Even better, there are plenty of places for people to sit while dinner is being made, from the dining table to the generous 12-foot island, which hides built-in recycling and garbage bins, a wine fridge and storage for extra dishware. Open shelves break up the cabinetry and offer a modern counterpoint to the traditional Shaker-style doors. 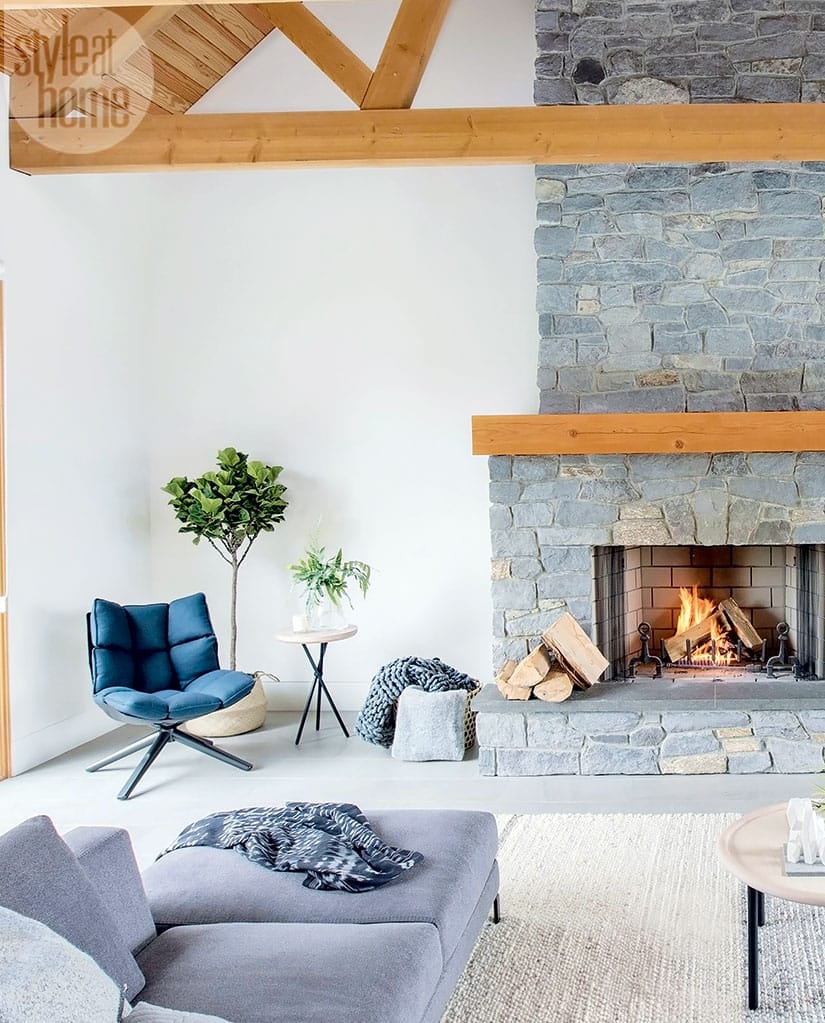 It took about a month for a stonemason to fabricate this hunky beauty of a fireplace out of local basalt ledgestone. It’s broken up by a Douglas fir mantel. “The homeowner used to have a cabin on B.C.’s Hornby Island with a big stone fireplace, so we replicated it,” says Scott. 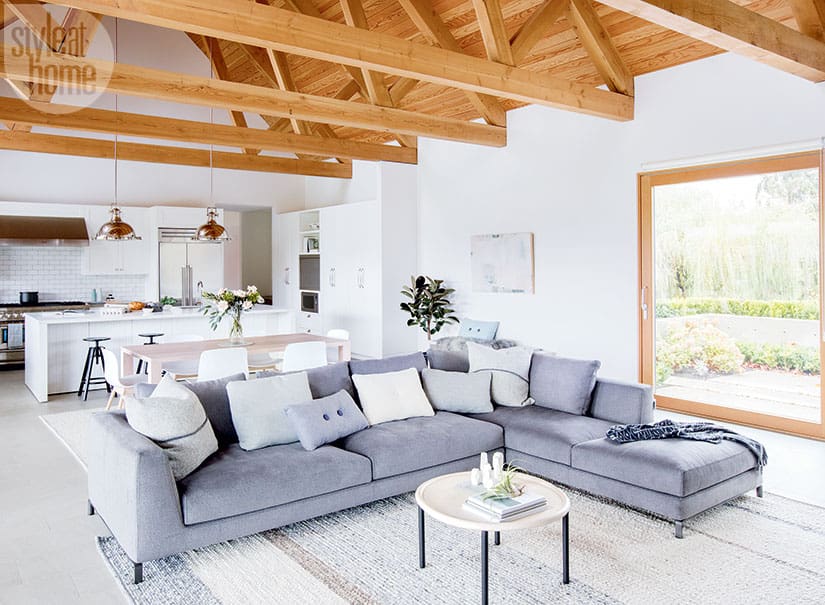 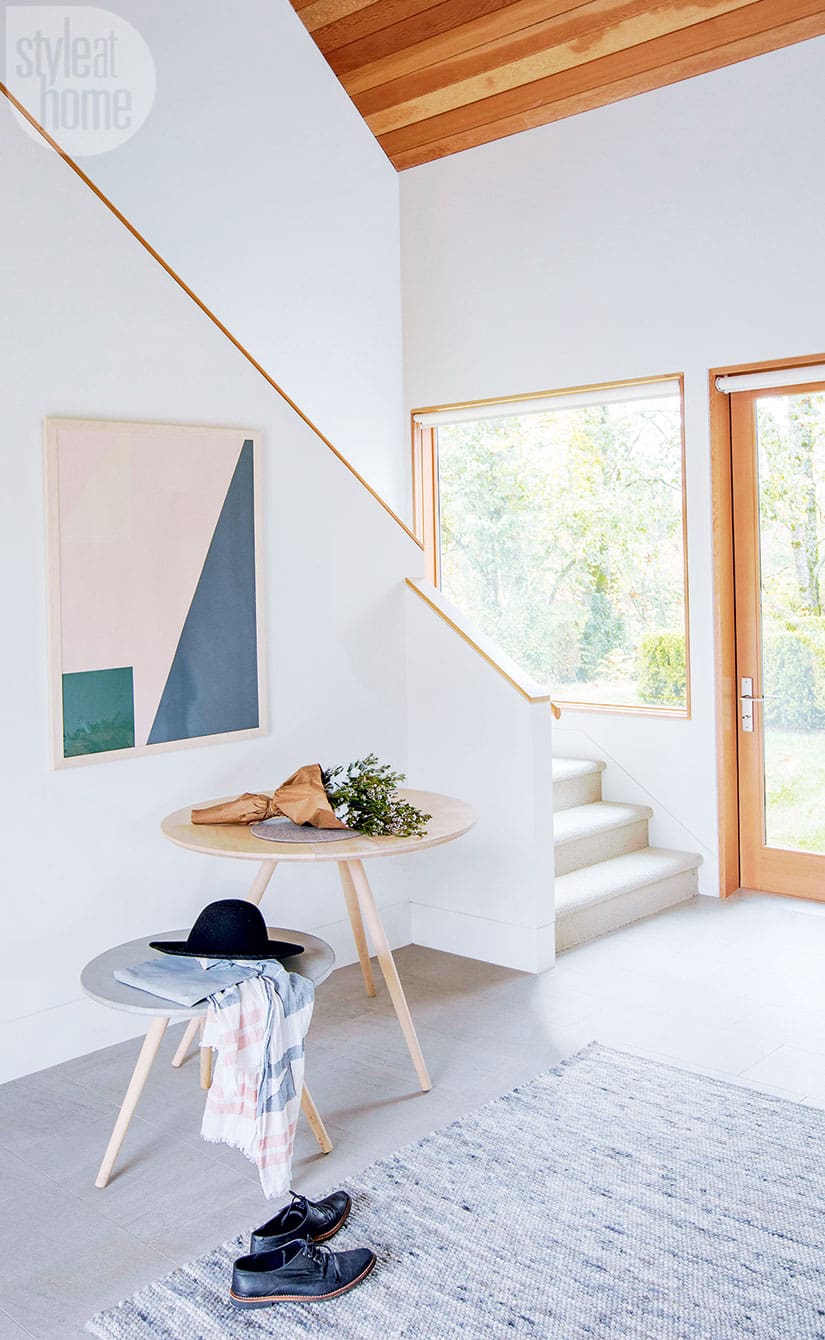 Sure, wear your shoes indoors – muddy dog paws are welcome, too, because chic yet durable porcelain floor tiles run throughout the main living area. “They’re bulletproof,” says Scott. “They could be used at a swimming pool. They’ll definitely stand up to all the dog traffic here.”

A modern geometric poster echoes the lines in the stair rail and canted ceiling. The stairs lead to the second level, which is entirely designated to visiting family members. The homeowner’s bedroom is conveniently located on the main floor. 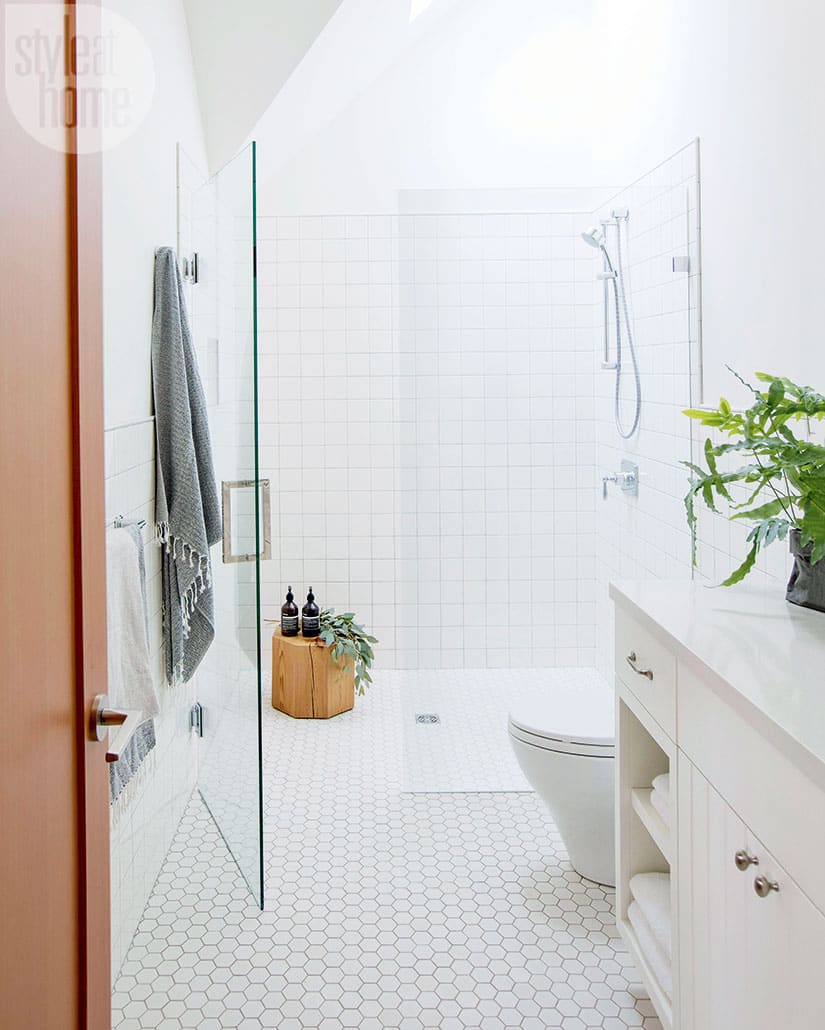 Scott installed a skylight in an upstairs bathroom to flood it with natural light – after all, the entire home gets great light, so why should this room be any different? White honeycomb floor tiles run right into the shower for a seamless look. “We also used the same cabinet design as in the kitchen to tie the spaces together,” notes Scott.

An empty nester's bright and dreamy ranch in rural B.C.