With dreams of designing a home that’s curent with a hint of heritage, an Ontario home builder is inspired by an iconic French stove.

La Cornue stoves, with their bold colours and ornate detailing, are the pinnacle of kitchen luxury. Some homeowners build a kitchen around them. But a whole home? That’s a more novel concept. Several years ago, John Raimondi, a builder of custom lakefront homes, took a shine to a La Cornue. When it came time in 2016 to build a house for his own family in Innisfil, Ont., that iconic stove figured prominently. “I thought it’d be a great jumping-off point for our kitchen—and really, for the whole house.” Indeed, the black of the Raimondis’ stove reappears regularly throughout their entire newly-built four-bedroom house. In the dining room, you can spot it in the bold, black Windsor chairs. Ditto, in the mudroom’s vintage lockers, and even the Thanksgiving pumpkins carry the signature colour. Providing contrast, the inky hue is offset by ample natural light and expanses of white walls broken up by rough-hewn barn beams and rugged rock throughout the home. It’s an aesthetic that meshes perfectly with the refined farmhouse style John and his wife Lynne wanted, set on a four-acre lakefront lot on Lake Simcoe’s Kempenfeldt Bay. Inside, the spaces—which the couple worked on with designer Lidia Van Zyl—were planned to feel cozy, but not overly historic. “We didn’t want it to be mistaken for something old,” John says. “It’s current with a hint of heritage.” 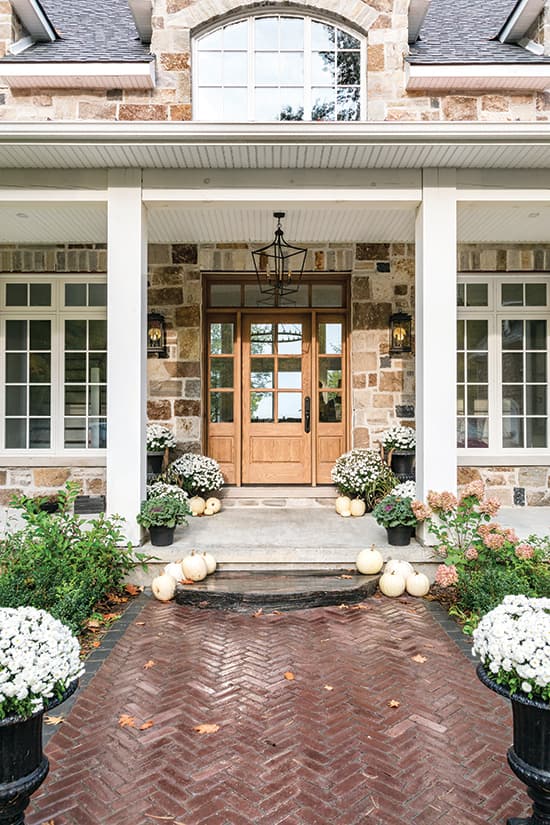 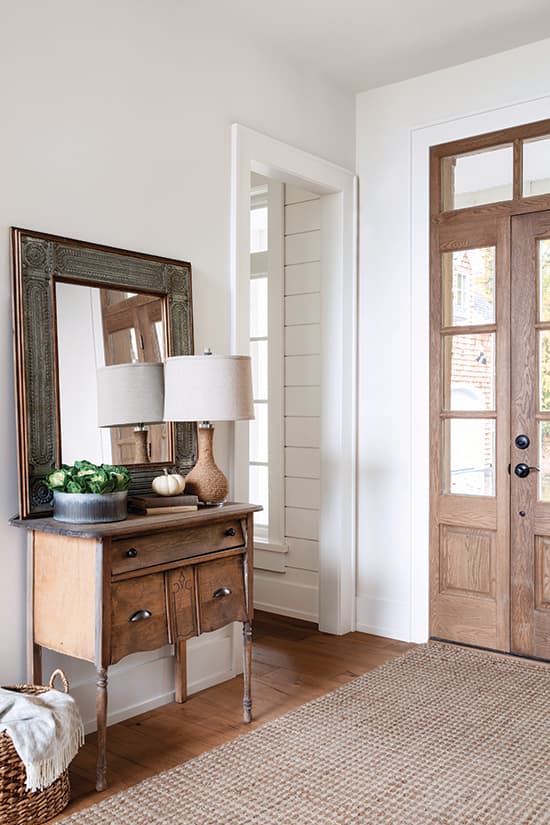 A pale unpainted wood door and antique table, plus woven accents like a jute rug, wicker basket and rope- wrapped table lamp bring a timeless elegance to the front hall, while walls washed in Benjamin Moore’s Cloud White (Lynne’s go-to paint) keep the look light and contemporary. “We have a lot of antique pieces that we repurpose and marry with modern finishes,” says homeowner and builder John Raimondi. 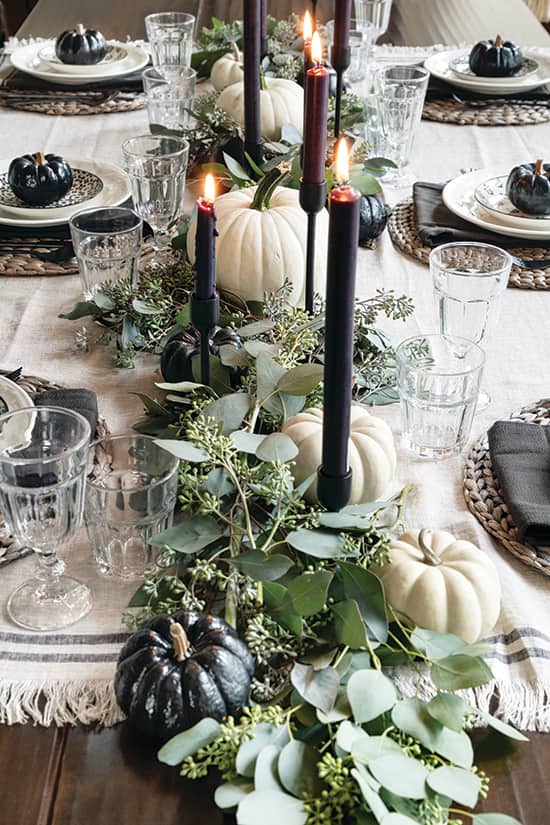 Black and white pumpkins and dusty green-seeded eucalyptus keep the look of the Thanksgiving table settings simple, yet elegant. A raw linen table runner and woven raffia placemats inject pleasing texture into the monochromatic vignette, and pressed glass adds a touch of sparkle. 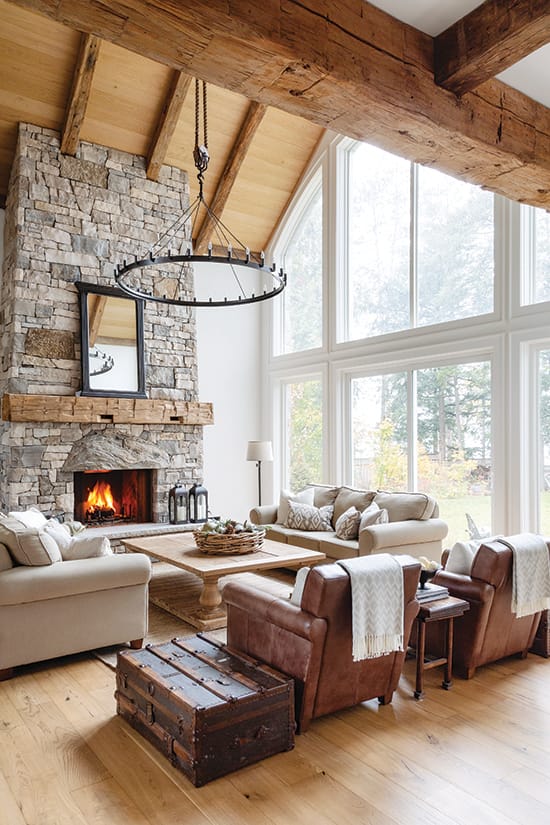 For the great room’s sitting area, the wood-burning fireplace and floor-to-ceiling windows looking out toward the lake were “non-negotiables” for Lynne. Casual, sand-toned sofas, a pair of leather chairs and a coffee table – all with roomy proportions – are inviting and well-suited to the dimensions of the space. Underneath a mantel made of an old barn beam, a huge boulder acts as a keystone in the stacked Owen Sound ledgerock. The huge round chandelier, mantel mirror and tall lanterns are suitably clean-lined accents that carry the black theme colour into this area. The flooring throughout the house is white oak. 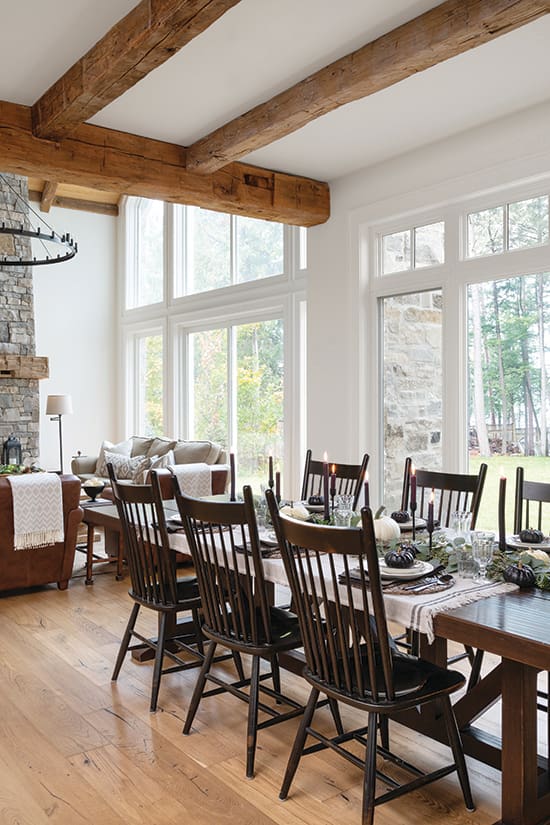 Lynne and John designed the great room as a space that can accommodate a crowd when needed. The long trestle-style dining table ringed in Windsor chairs seats 14. Lynne can seat six more on the screened-in porch off the kitchen and another six on the backyard patio. “Some people choose to sit inside because we’re west- facing, which is fantastic for sunsets,” Lynne says. 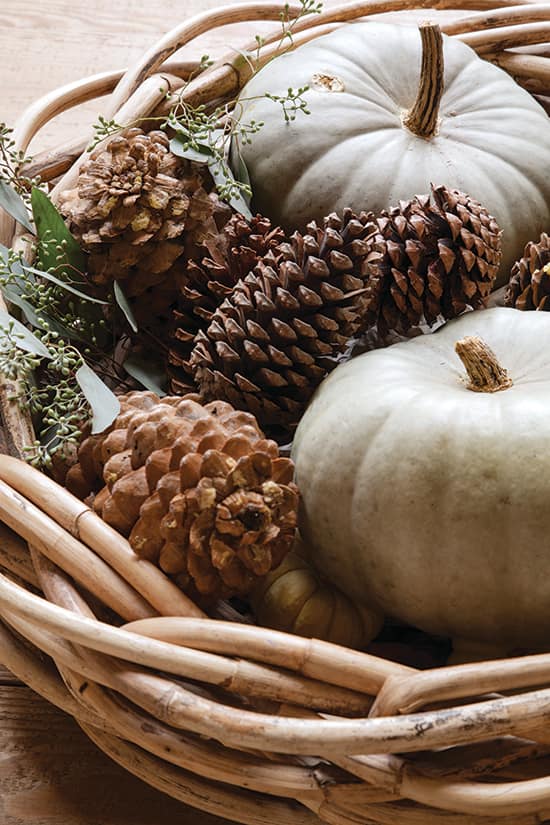 The living room, with a beamed and panelled ceiling and towering stone fireplace, has the most rustic look. “The beams came out of a 125-year-old barn just north of here,” John says. “We paired them with crisp ceiling boards that are actually stained white oak flooring.” The great room commands the most square-footage, with the bedrooms kept small. “We wanted this space to be as big as possible so everyone can hang out together”, explains Lynne.

At Thanksgiving, when John and Lynne’s families descend and gather in the great room before the festive meal, that big black stove figures prominently, proffering the turkey, stuffing, vegetables and pies that everyone looks forward to every year. And although John might not be the cook in the family, he definitely knows this: the kitchen is the heart of a home, and the inspiration for his. 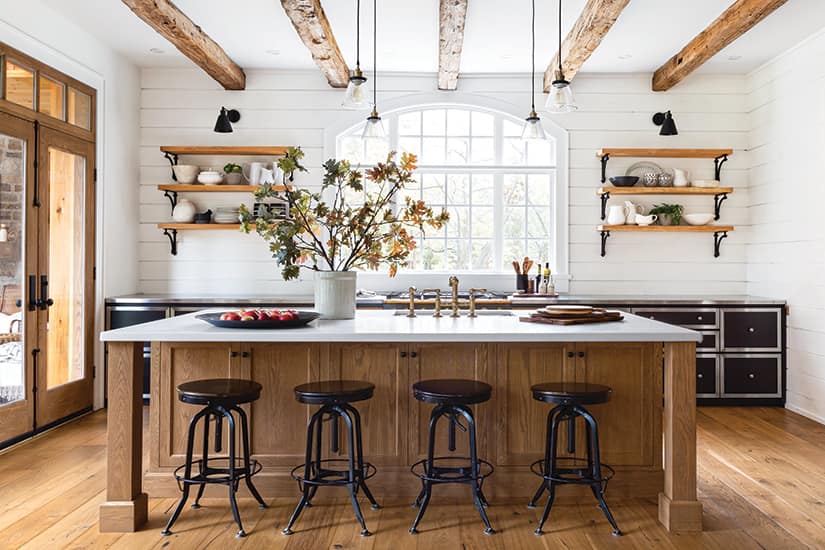 A huge wood island and delicate glass pendant lights delineate the kitchen without hampering visual flow to the window. The island’s white Caesarstone counter also lightens the look. Double doors lead out to the screened-in porch, where a second wood-burning fireplace lets the family enjoy dining, lounging and watching TV outside even in cooler weather. The dramatic black La Cornue stove inspired the design of the custom kitchen. “That was the catalyst: we designed all the elements of the kitchen and its colours around it.” Black cabinets adorned with steel strapping and topped with a stainless steel counter run the length of the wall, broken up by two sets of oak drawers. The dark tone is balanced by abundant natural light and walls washed in warm white. 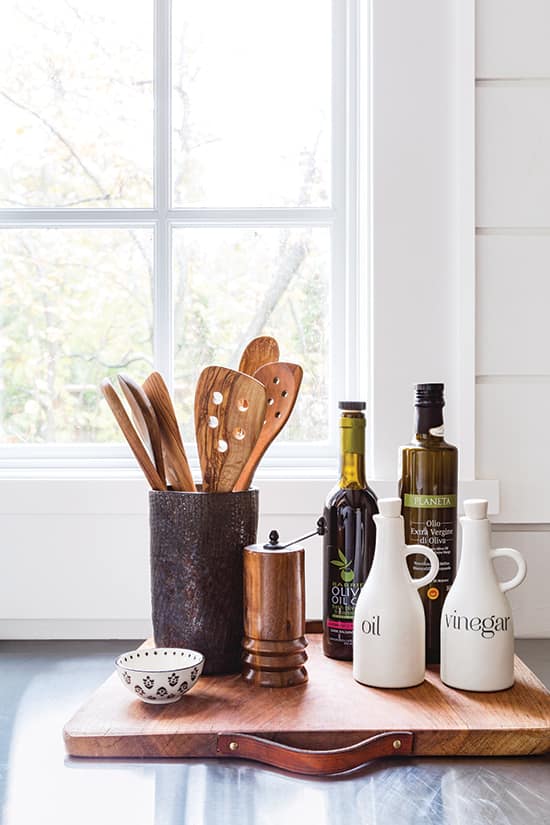 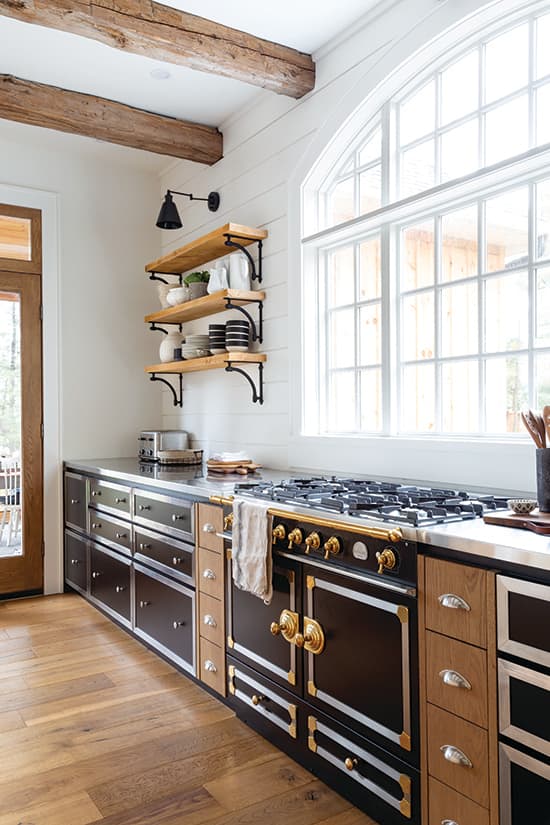 Vintage drafting stools with a well-worn finish are dark-toned counterpoints to the spacious oak island and its crisp white Caesar-stone top. “There was a lot of discussion on whether we should do a coloured painted-wood island. Instead, we chose to do it in wood to match the beams and floor,” John says. Floating wood shelves filled with artful serving pieces build on the old- fashioned, unfitted kitchen look. “We had more than enough cabinet space elsewhere, so we opted for something more architectural and decorative for the uppers,” John says. 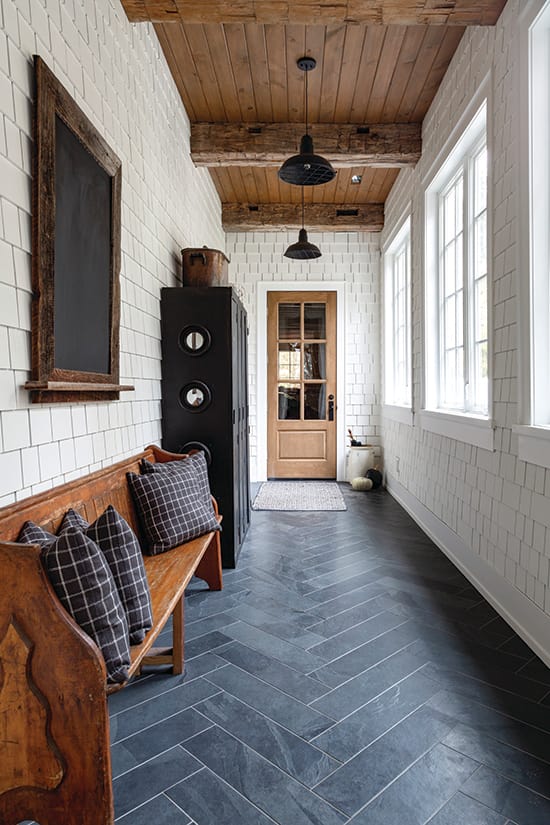 It’s as functional as any modern mudroom, but this one – located between the garage, laundry room and kitchen pantry – is outfitted with decidedly old-world accoutrements like a long church pew, a vintage schoolhouse chalkboard and row of lockers painted in black. The walls are clad in cedar shakes – leftover from the exterior, and painted white. The herringbone pattern of the slate floor tiles echoes the look of the front walk. 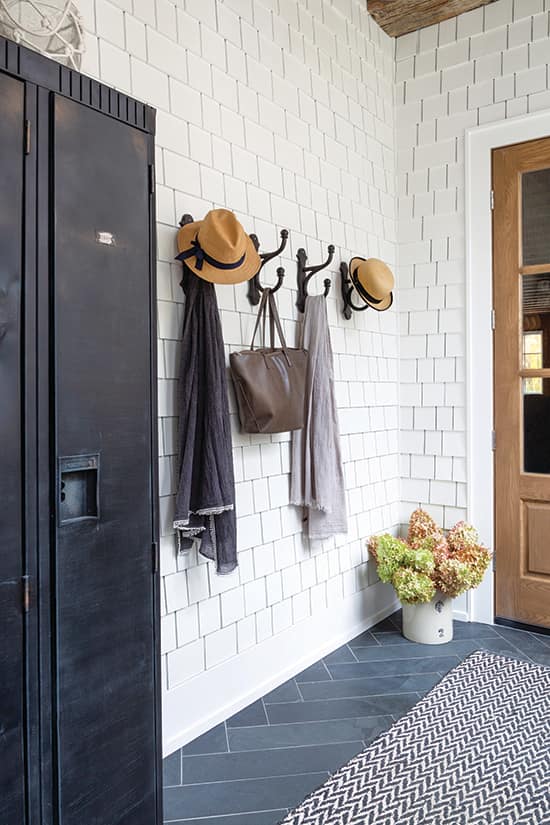 The mudroom lockers were salvaged from Lynne and John’s high school, where the pair first met. “They were a bright blue, so we painted them to match the slate floor,” Lynne says. “And there’s four of them, so we each have one.” Four big cast-iron hooks add additional function. “The kids can grab their school bags, or their hockey or soccer bags, and just head out,” she adds. “We don’t have to store those things in other rooms.” 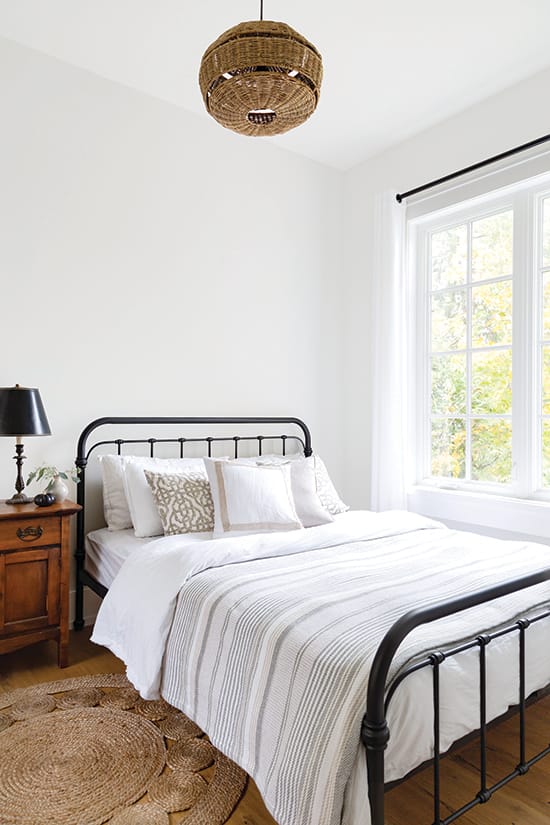 The bright white main floor guest room is dressed with classic cottagey accents like a wrought-iron bed, summary striped cotton blanket and seagrass rug. Because there’s just one guest room, Lynne outfitted it with two queen-sized beds. “It’s a perfect room for a full family,” she says. (A loft over the garage will be transformed into a second guest space later on).