Celebrated designer Orlando Soria creates a carefree and quirky Palm Springs-style oasis in the canyons for a famous Canadian writer living in L.A.

Few friendships are built solely on decor, but for Orlando Soria and Kelly Oxford, it was certainly the foundation. Having met when he redesigned her Los Angeles office, they seem like a match made in heaven: Orlando, creative director of the design firm Homepolish, is one of the decor world’s funniest Instagrammers, and Kelly became famous for her hilarious and unapologetically sarcastic tweets. Needless to say, the office transformation was marked by not only shared tastes, but also cheeky texts and rapid-fire repartee. So when the Edmonton-born, L.A.-based writer of the bestselling memoir Everything Is Perfect When You’re a Liar – who’s also authored television pilots and movie scripts and appeared in film and on TV with the likes of James Franco and Nicole Richie – moved into a new home with her husband and their three kids, Orlando was the obvious choice to head up its design. “We had such a good time doing Kelly’s office, it was only natural that I do her house as well,” he says.

And Kelly’s an easy client. “Half of our texts were about furniture; half were attempts to make each other laugh,” says Orlando, who would send Kelly photos of crazy finds to which she never once replied “Why the heck are you showing me that!?” At times, Kelly even joined Orlando on his flea market furniture hunts. “She’s way better at bargaining than me,” he admits.

Only the main living area needed Orlando’s deft touch, but it presented a challenge for the designer: How would he make the grand all-white room, which gets lots of light from a wall of floor-to-ceiling windows, feel elegant and cozy? Dividing the space into three “rooms” (a dining area, living area and family area) unified by a cohesive colour palette and matching rugs was a clever start. Establishing a cool mid-century Palm Springs vibe – which embraces bright light, bright white and bright accent colours – perfected the look, as did the eclectic elements synonymous with Kelly’s style.

“Kelly loves clean lines and contemporary accessories, but there’s a special place in her heart for vintage kitsch – items that have a bit of humour to them,” says the designer. To that point, there are plenty of cheeky moments throughout the house. Those plastic horses trotting along the bar shelves? “We saw them at a flea market and thought they looked stupid but cool at the same time,” he says. That dining room gallery wall? Kelly and Orlando painted bikinis on the nudes to poke fun at ultra modesty. And the French poster for Hitchcock’s The Birds in the kitchen’s eat-in area? A wink at Kelly’s Canadian heritage. “I guess you guys like things that are French because, um, you know more French than we do?” jokes Orlando.

Leave it to a friend to understand the nuances of one’s stylish eclecticism – and the quirky chicness of Kelly. As she says in her memoir, “I like the idea that we can contain our weirdness, but I prefer it when we wear it all over ourselves.” Clearly that holds true for her home, too. 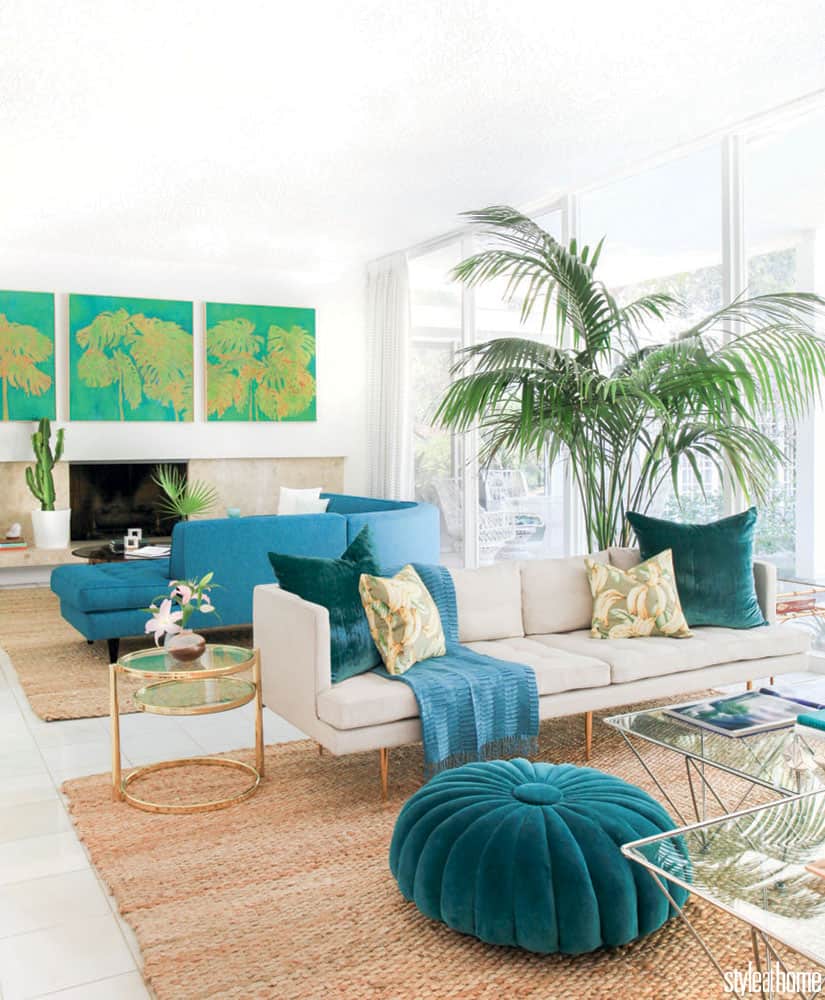 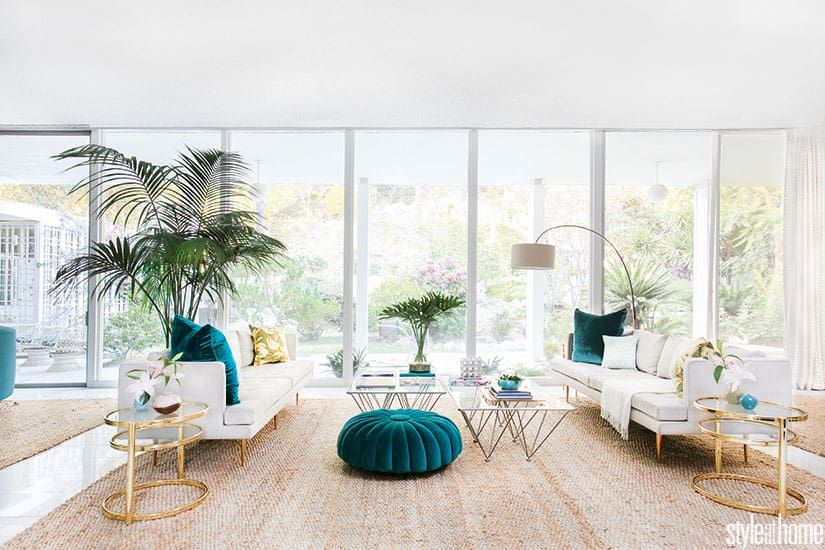 When Kelly and Orlando saw an orange pouffe at a flea market, they thought the $150 US price tag was steep, considering they’d have to have it re-covered, so they passed on the purchase. “But when we walked by the pouffe later in the day, some girls were admiring it, and we said to each other, ‘If they buy it, we’re going to die!’ It’s funny how you realize you want something as soon as someone else wants it, too,” says Orlando with a laugh. The now-teal pouffe is perfect for the living area. “And we still talk about the time some girls tried to steal it from us.” 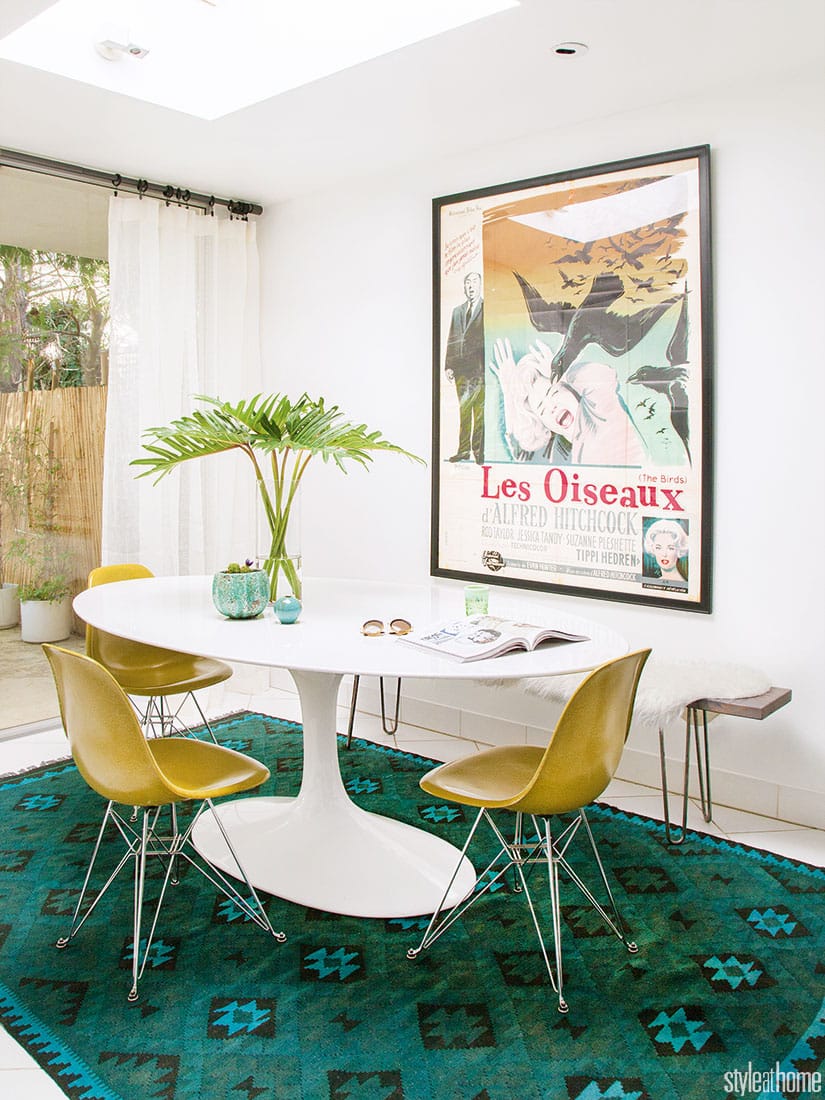 Long and narrow, the kitchen’s eat-in area demanded an oval-shaped dining table rather than a round one. Orlando also made the bench himself – with the help of Kelly’s young son, Henry – by drilling industrial hairpin legs into a slab of stained wood and tossing a sheepskin on top. “Every other bench we saw was either too deep or too expensive,” says Orlando. 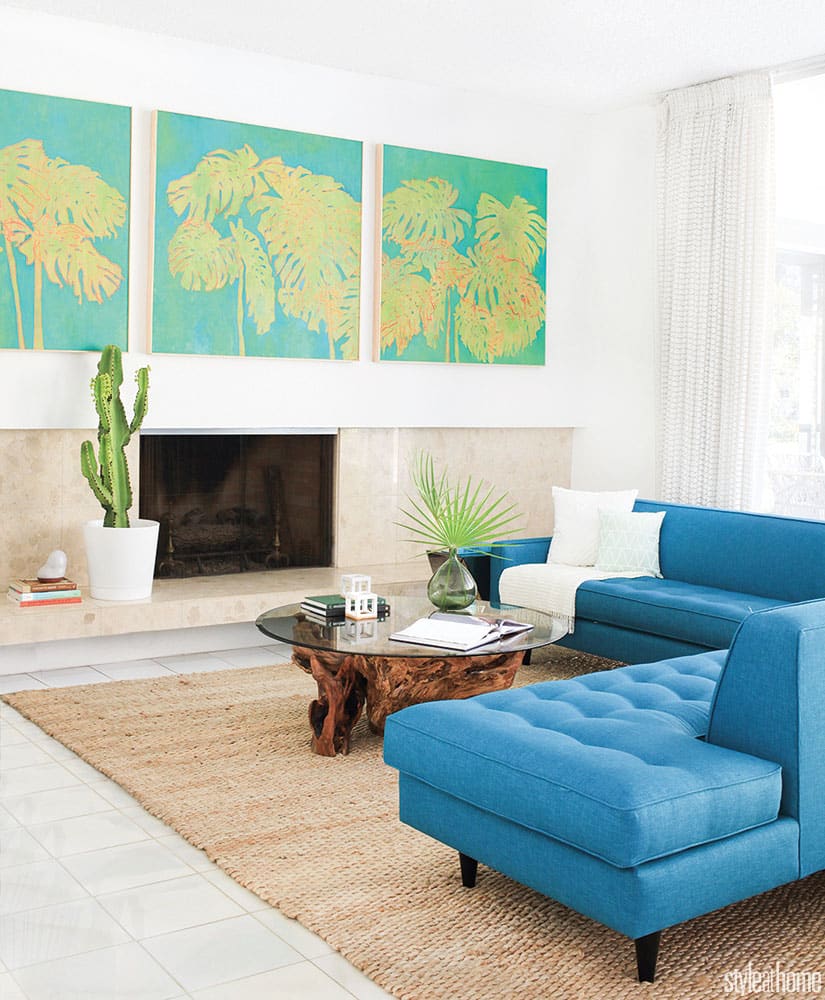 A massive sectional was a must for the casual family area, where Kelly, her husband and their three kids, pair of cats and two dogs spend tons of time. this bold blue one (which is 10 feet long on both sides) fit the bill for the family to curl up by the fire or watch TV. 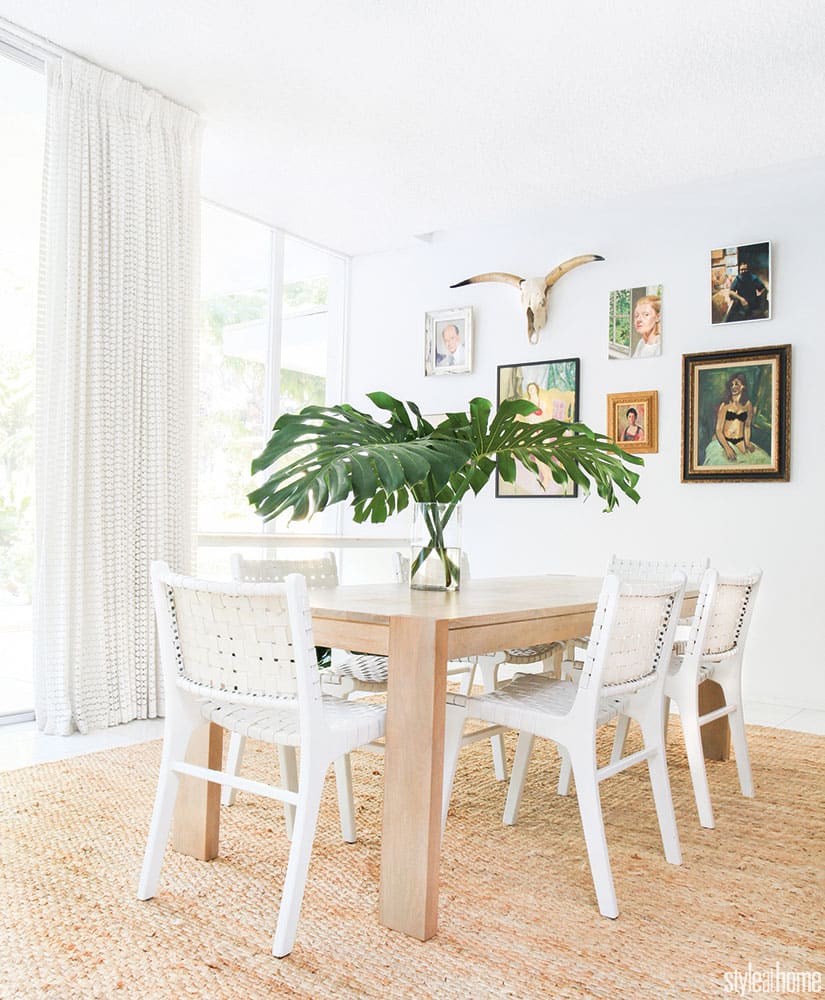 “I like to use a variety of materials in any given space,” says Orlando of his approach to decorating. In the dining area, woven chairs (“there’s something very ‘resort’ about them”) are paired with a wooden table, sheer drapery and a view of the backyard pool. “there are a lot of different elements to enjoy.” 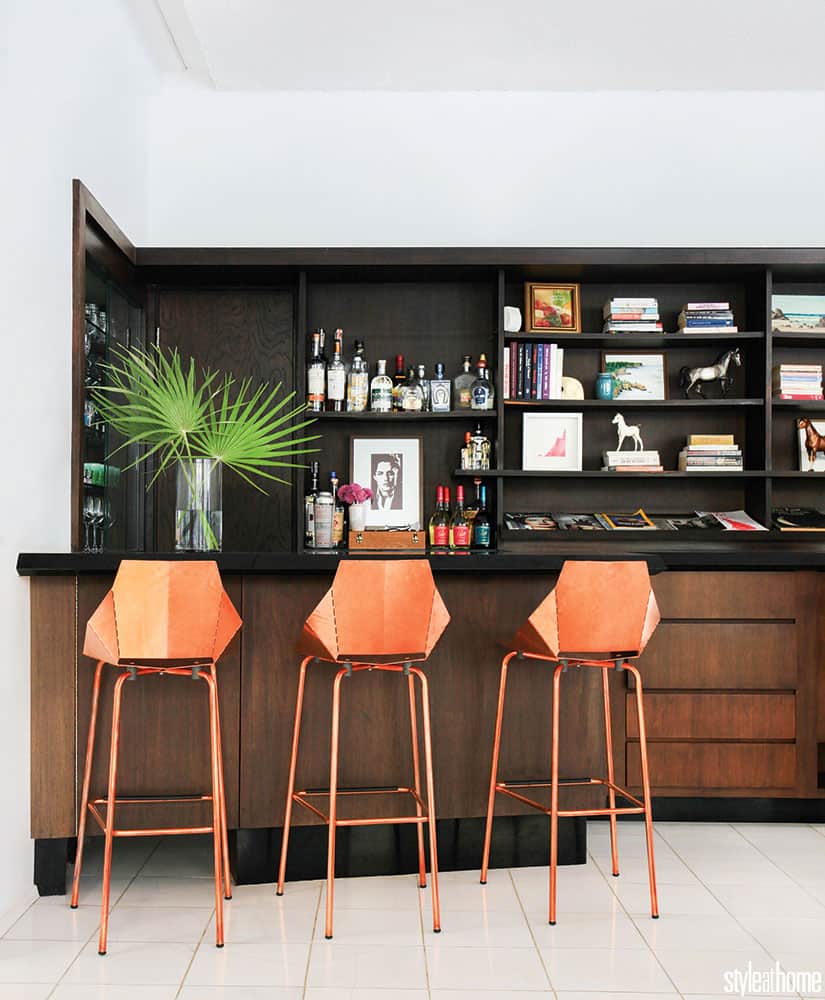 “Built-in bars are so mid-century modern,” says Orlando. this one, which is original to the house, is located across from the dining area. “Back in the 1950s and ’60s, people thought having a bar was super glam, which is cute and kind of hilarious.” But there’s no denying that this drinks station is perfect for parties. Its dark surface lends some contrast to the space, while the architectural stools add a dose of fresh, edgy flavour.