An architect creates an island escape where the design is full of character, the vibe is laidback and the ocean views are spectacular.

“Low-pulse.” There couldn’t be a better way to describe this relaxed boat-access cottage in the spectacular setting of Keats Island in B.C. And the person who coined the term is homeowner and architect Jim Bussey, whose playful approach and creative point of view were key to building such a charming and convivial space. “There’s a very low-pulse atmosphere here,” reiterates Jim, owner and president of the Vancouver architectural firm Formwerks, who purchased the heavily treed empty lot four years ago. “I wanted to create something that was friendly, homey, inviting and very relaxing. But I didn’t want to have a place that was schlumpy or dumpy. I wanted something classic and chic yet extremely comfortable.”

When working with clients, the Formwerks team prides itself on truly listening to the homeowners’ wants and needs. So when it came to designing Jim’s own cottage, which he shares with his wife, Jenna, their five grown children and their beloved Yorkshire terrier, Chloe, he was cognizant of listening to himself. “I had to project myself onto a screen, so to speak,” Jim says. What he saw was inspiration from the past, present and future: spending childhood days at his parents’ cottage in Ontario; enjoying time with his Keats Island neighbours (when this lot came on the market, he was specially invited to join the close-knit enclave of six properties); and creating a place for hosting business get-togethers, as well as relaxing with a good book. “If you compile notions of past experiences and future desires, you get a backdrop you can respond to,” he says.

It’s a creative process that, after six months of construction, resulted in a modern 1,200-square-foot structure that’s striking – obviously the home of an architect – but simple and not overbearing. “I didn’t want it to be an example of cold austere modern architecture. It had to have warmth and comfort built into it,” he says. 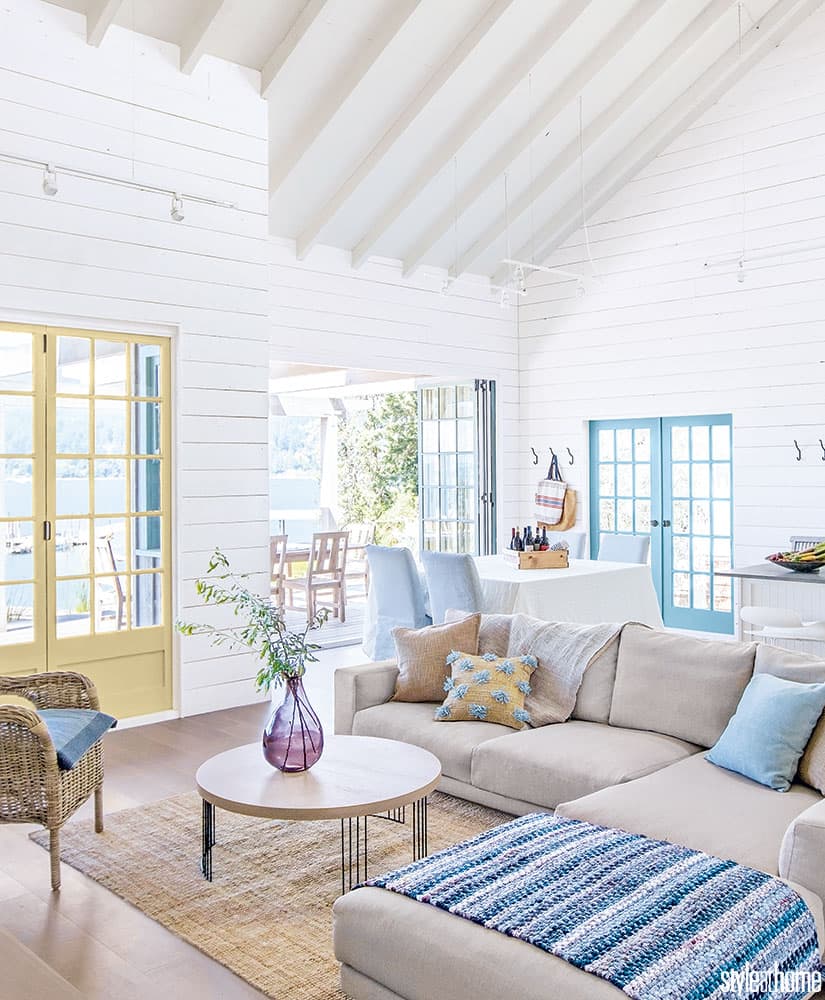 The living area of this escape features interesting architectural elements like shiplap-clad walls, exposed ceiling beams and salvaged windows and doors (some about 100 years old). 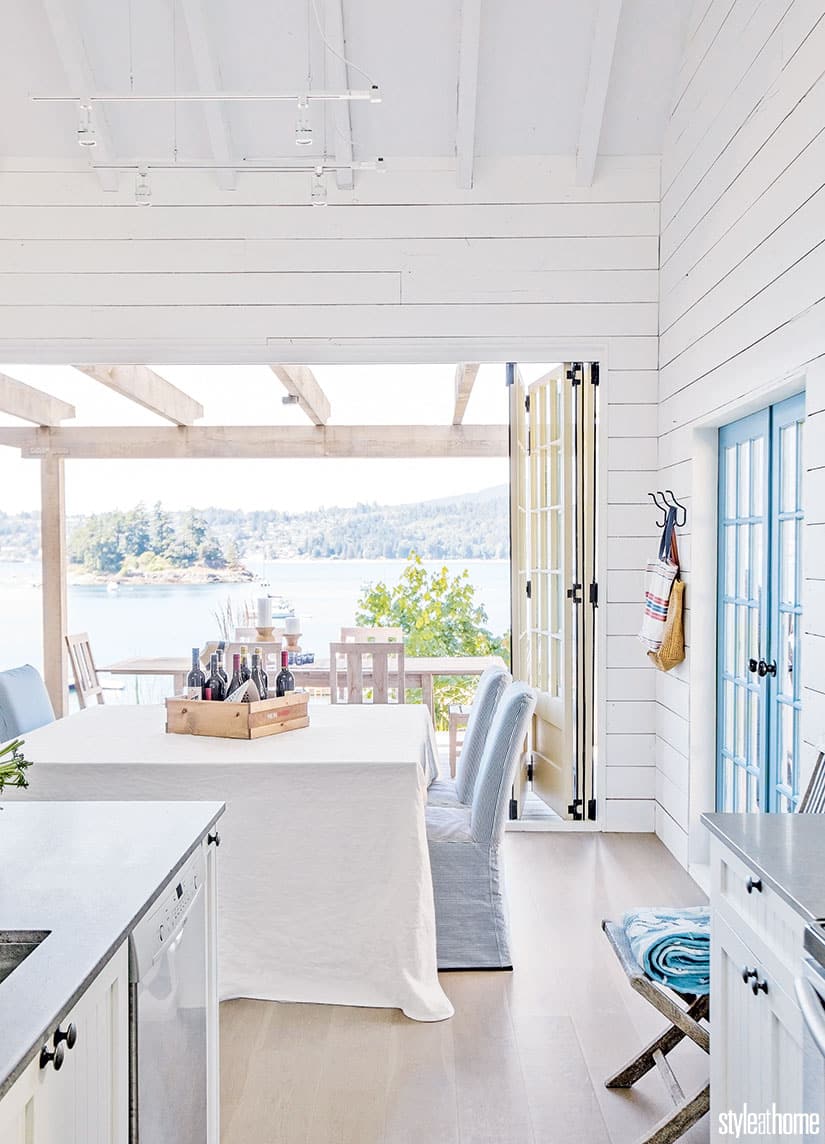 In the dining area, slip-covered chairs and a casual tablecloth make for stress-free meals because spills can be easily cleaned up. “We wanted this place to feel comfortable for anyone who visits,” says interior designer Jack Brown. “We didn’t want anything to feel too precious.” 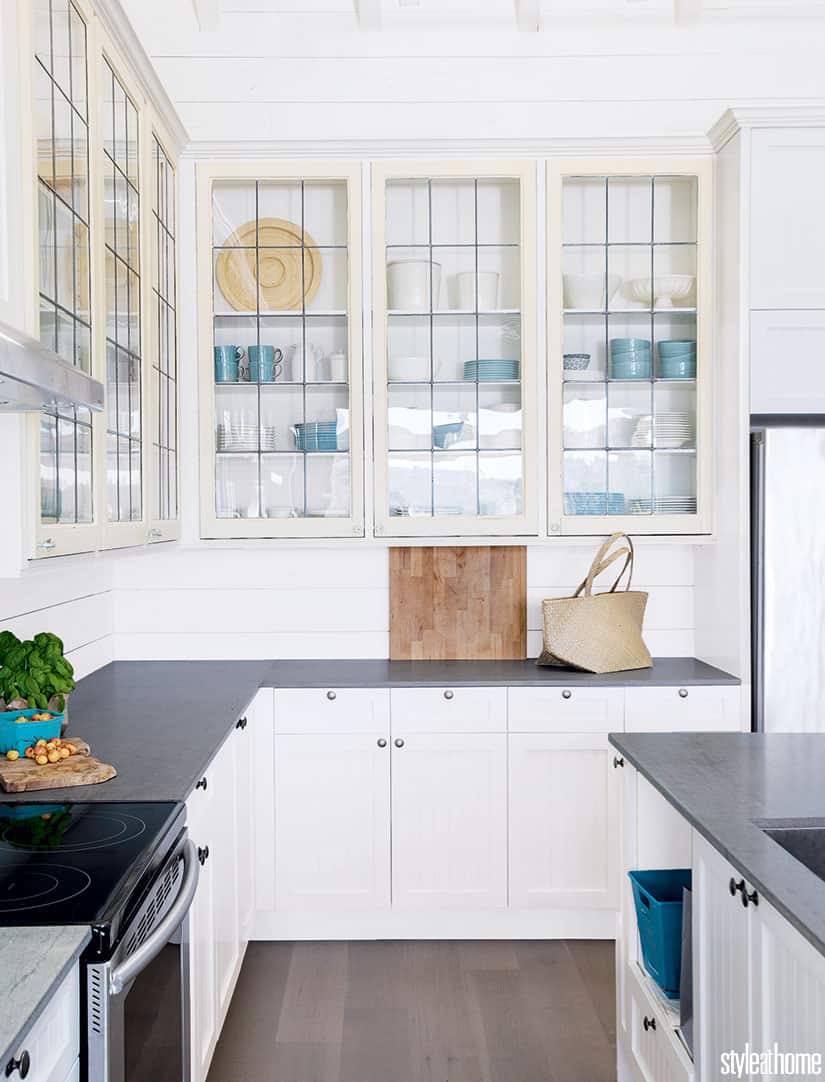 Salvaged leaded glass windows used as cabinet fronts lend the kitchen distinctive interest and old-time character. “My contractor said, ‘I’ve got these old windows lying around, if you want to use them for your cabinets,’” explains Jim. “They happened to be this buttery yellowy colour and I kept them that way to offset the stark white and the teal.” 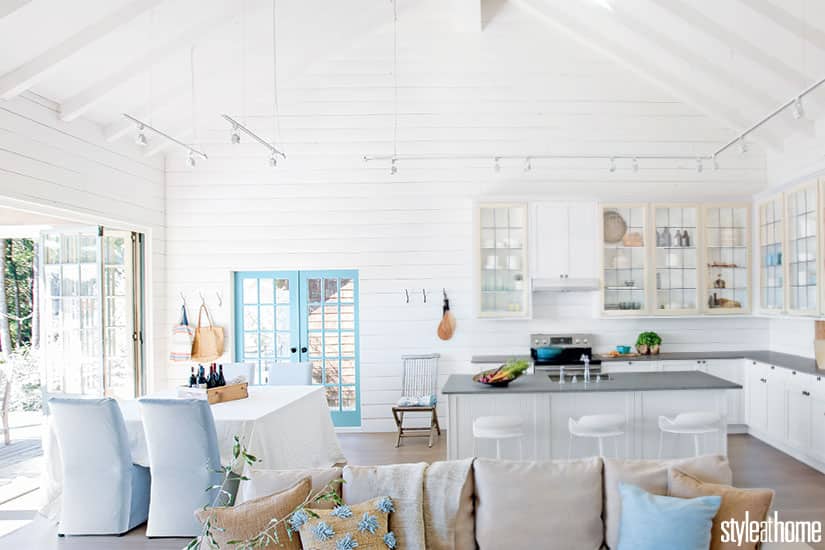 Used in lieu of pendant lights and statement pieces, minimalistic suspended track lighting is practical and unobtrusive. “I didn’t want to distract from anything else in the space,” says Jack. The neutral palette and clean-lined furnishings also let the architecture shine. 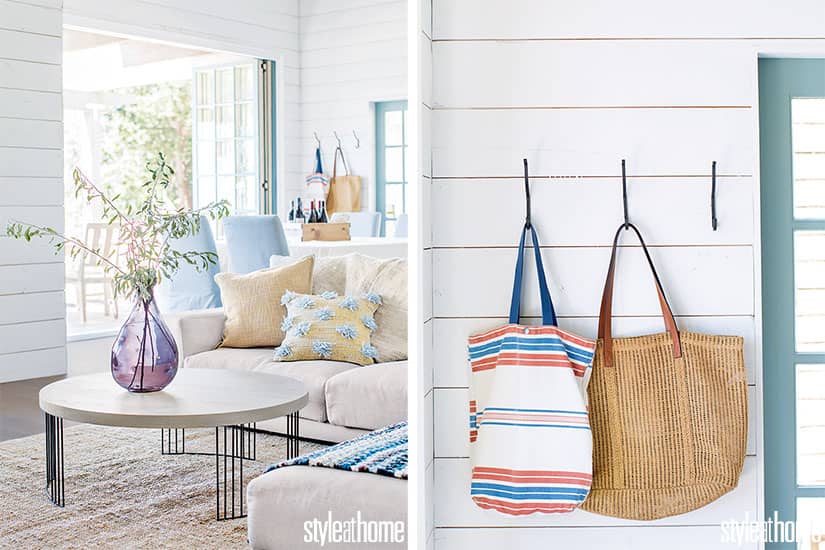 Layering natural textural elements, such as the sisal rug, wicker chair, rag rug (on the sofa) and linen toss cushions, adds depth and coziness to the living area. Simple wall hooks by the deck door offer a convenient spot to hang bags and jackets. They also echo the carefree vibe of this cottage, where everything is unfussy and comfortable. 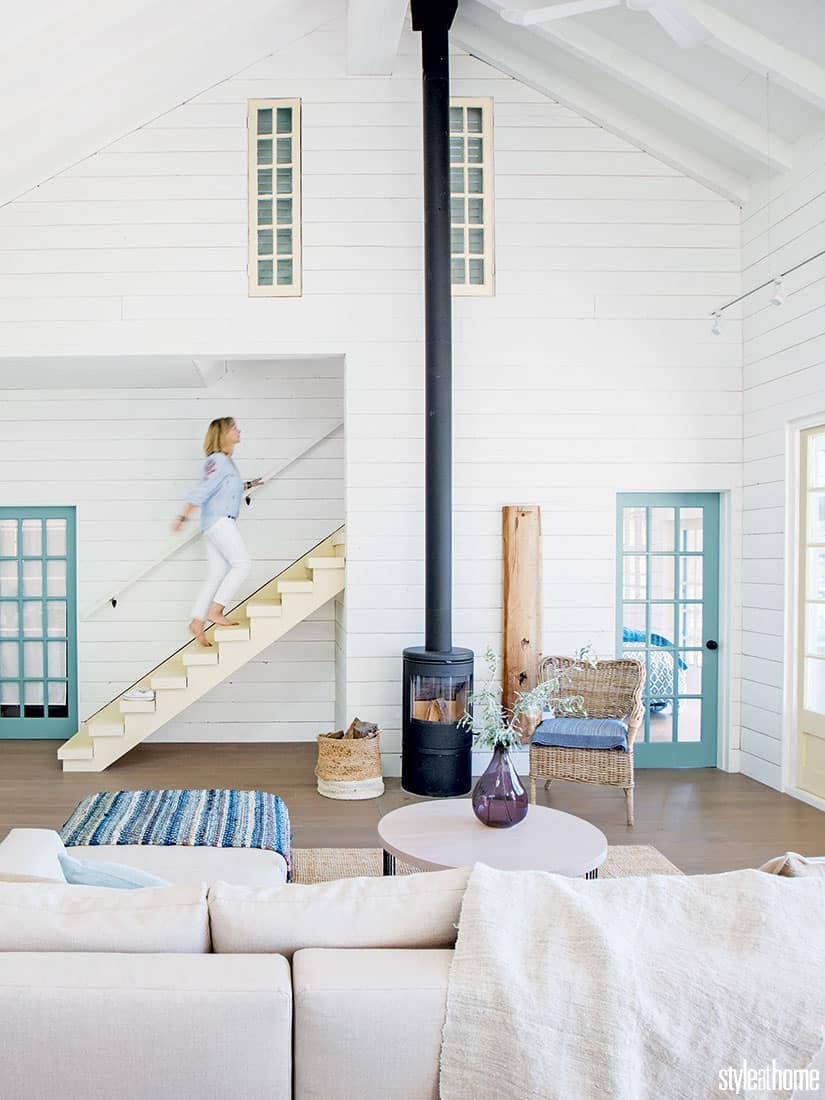 With its clean lines and long exposed flue, the wood-burning stove looks sculptural in the mostly white space. Salvaged windows placed in the stairwell wall exemplify homeowner and architect Jim Bussey ’s creativity and witty sense of humour. “It’s a playful wink,”  he says. “You just never know what’s going on up there.” 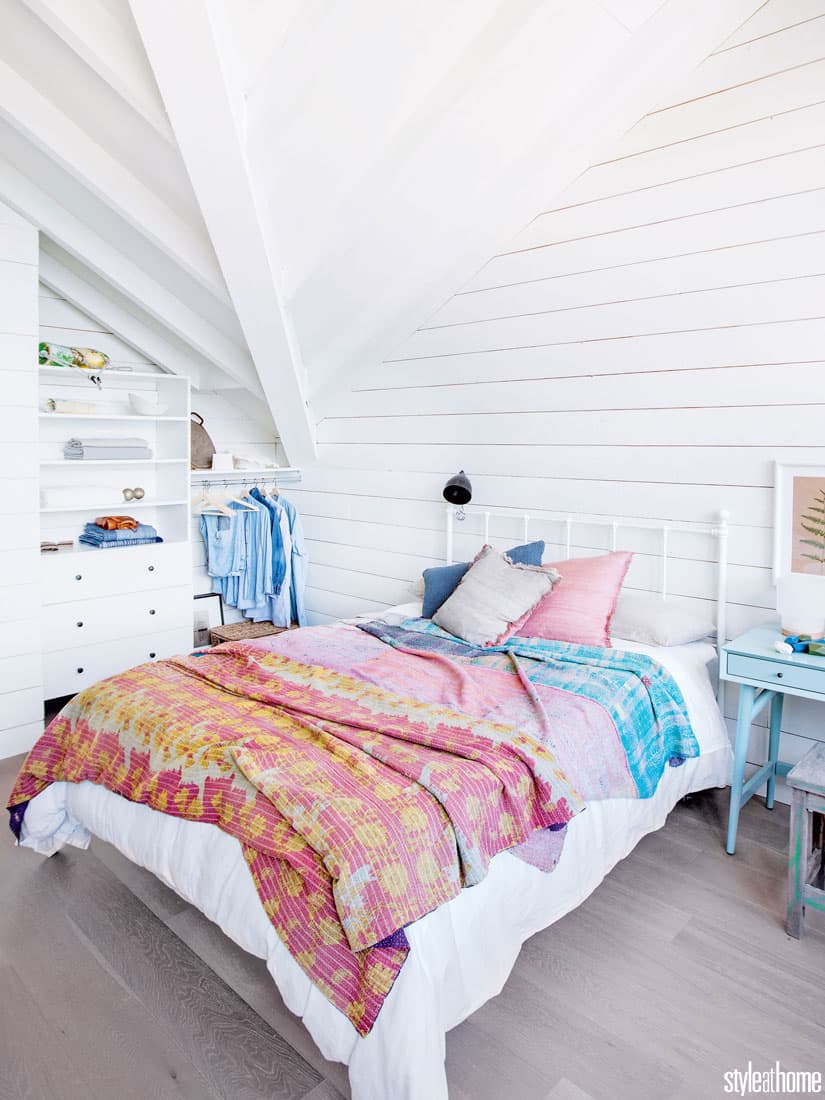 The clothes storage in the master bedroom exemplifies Jim’s keep-it-simple attitude. “We really only need a few things when we’re here – a  couple of nice outfits, bathing suits and old sweaters and jeans,” he says. “So we didn’t want a full walk-in closet.” Vintage kantha quilts add pops of colour. 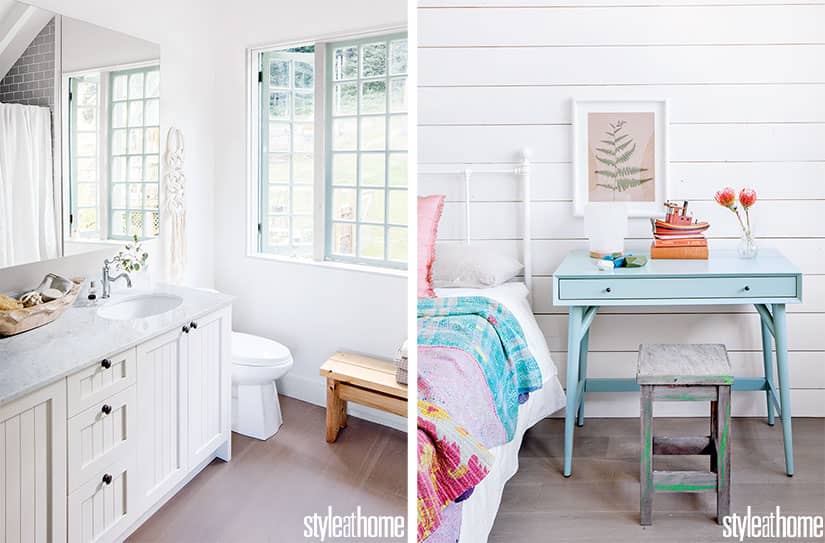 The guest bathroom’s vanity has the same bead-board door fronts as the lower kitchen cabinets, offering continuity. The turquoise window frames achieve the same effect. A mid-century style desk and a rustic stool are paired with a white-painted wrought-iron bed in the master bedroom, creating an eclectic mix. The desk provides a punch of blue, “so the room is not just a big white box, and it’s cohesive with the rest of the house,” says Jim. 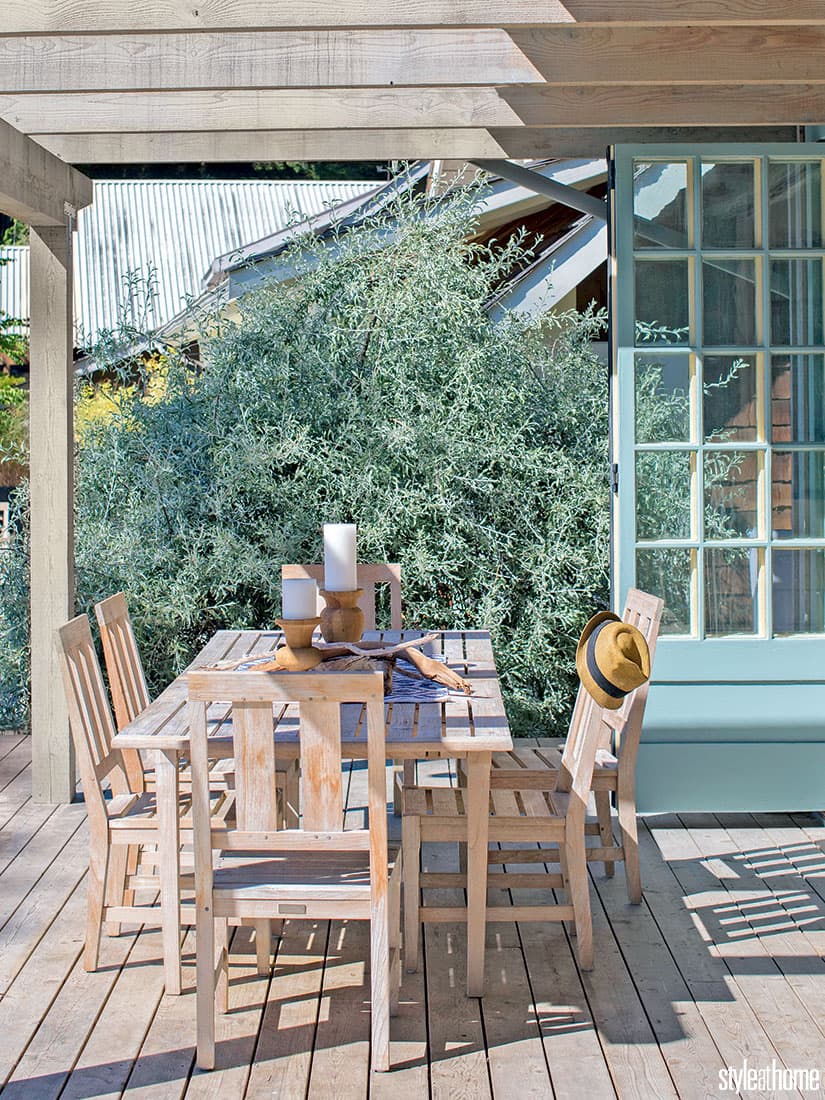 Accordion doors made from refurbished French doors open the cottage’s indoor dining area to an alfresco one on the deck. 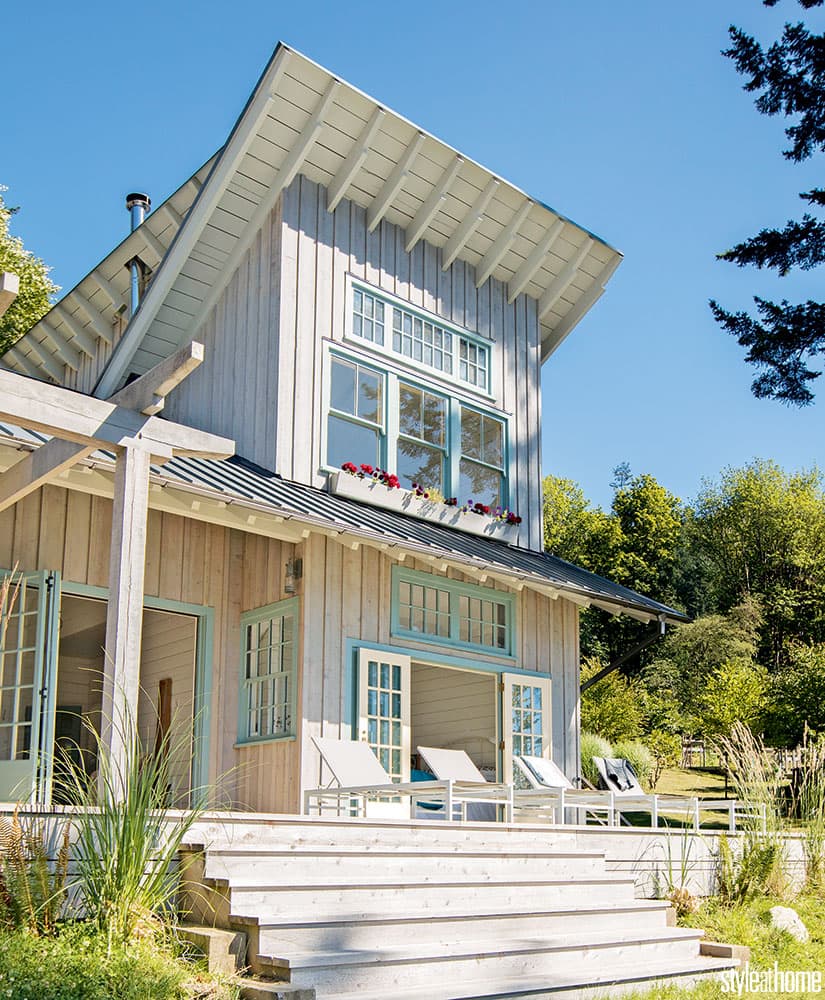 Vertical cedar siding emulates a weathered look. "We wanted the cottage to look like it had been there for a long time, even though it's brand new," says Jim.