Surrounded by grandkids - but with a quiet spot all his own - this cottage has created the chic retreat of his dreams.

Sometimes, you need a retreat within your retreat - especially when the serene cottage you purchased for your young family more than 40 years ago is today teeming with energetic grandchildren (nine under the age of 10, to be exact).

Wanting to stay close to his family but also enjoy the serene lakeside living, the homeowner envisioned a brilliant solution: to build a cabin (which would be his and his alone) beside the original bungalow (which he’d let his children and grandchildren take over).

One Torontonian bought his original cottage on Lake Simcoe in the early ’70s, when his own three kids were less than 10 years old. There, the siblings filled those lazy, hazy days of summer with quintessential Canadian cottage experiences, such as learning to swim, spotting wildlife and roasting marshmallows. But now that the owner’s kids have their own kids, the laughs and crafts, games of tag and, yes, inevitable tears are sometimes too much. 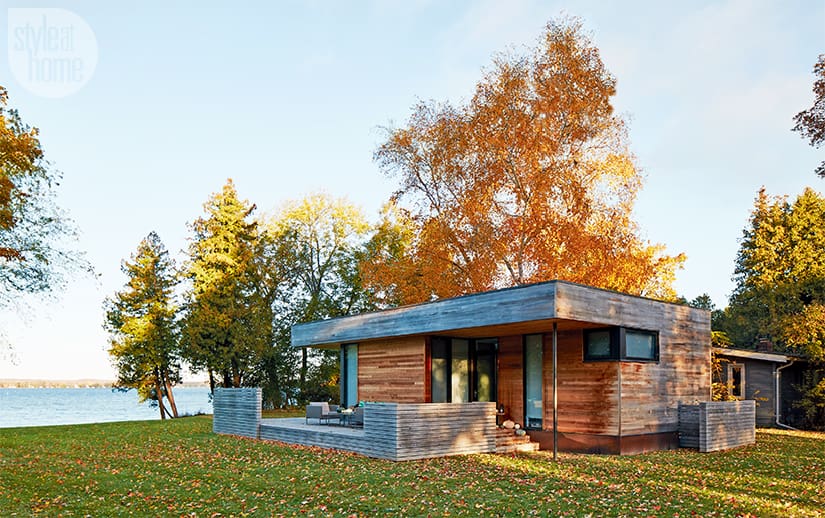 This low-lying single-storey building is clad in rustic cedar siding that blends beautifully with the landscape. It also boasts a wraparound deck that takes advantage of the varied scenery.

So in 2010 he hired the Toronto-based architectural firm Superkül and designer Stacy Begg to create his kids-free bunkie: an 840-square-foot two-bedroom space that boasts its own private entry, kitchenette, bathroom and deck, and is connected to the cottage via a long glass-walled walkway. “The addition is contemporary, pure and minimalistic – yet warm,” says Andre D’Elia, the principal architect. And that’s precisely what the homeowner, an avid reader of modern architecture magazines like Dwell, wanted. “Plus, the quiet, restrained design allows the majesty of the setting to dominate,” says Andre. 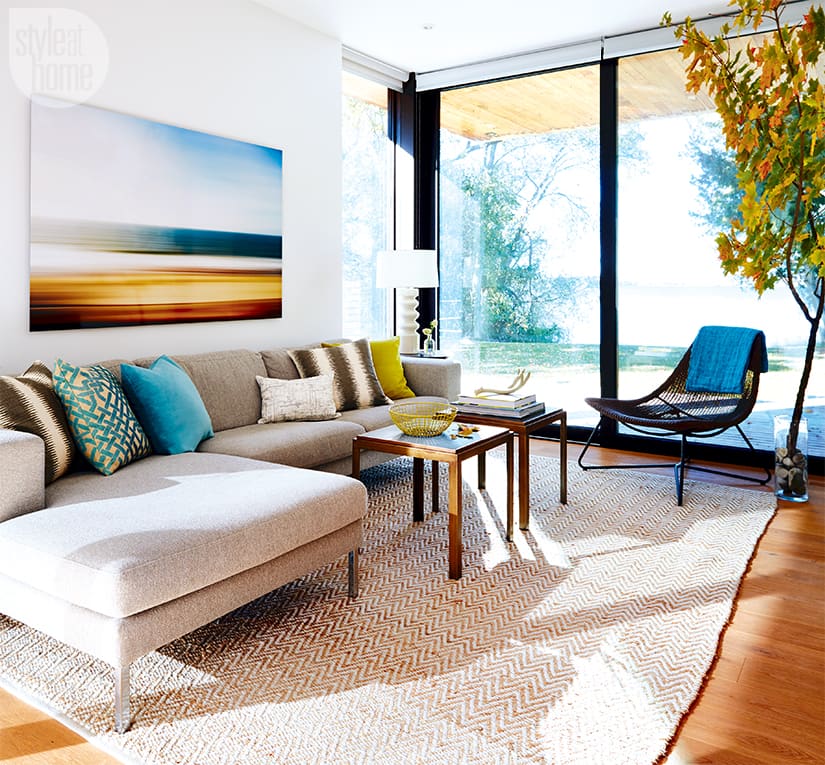 In the living room of this cozy modern cabin at the southern tip of Ontario's Lake Simcoe, simple details like white oak flooring, artwork reminiscent of a sunset and an antique antler pay homage to the surrounding wilderness.

Though several decades separate the modern cabin from the original log cottage, the two are stylistically linked through their ample use of wood, which also blends the new building into its sylvan surroundings. To further blur the lines between indoors and out, hard-wearing cedar decking was stained to match the white oak interior flooring, which seems to extend right outside the huge windows. 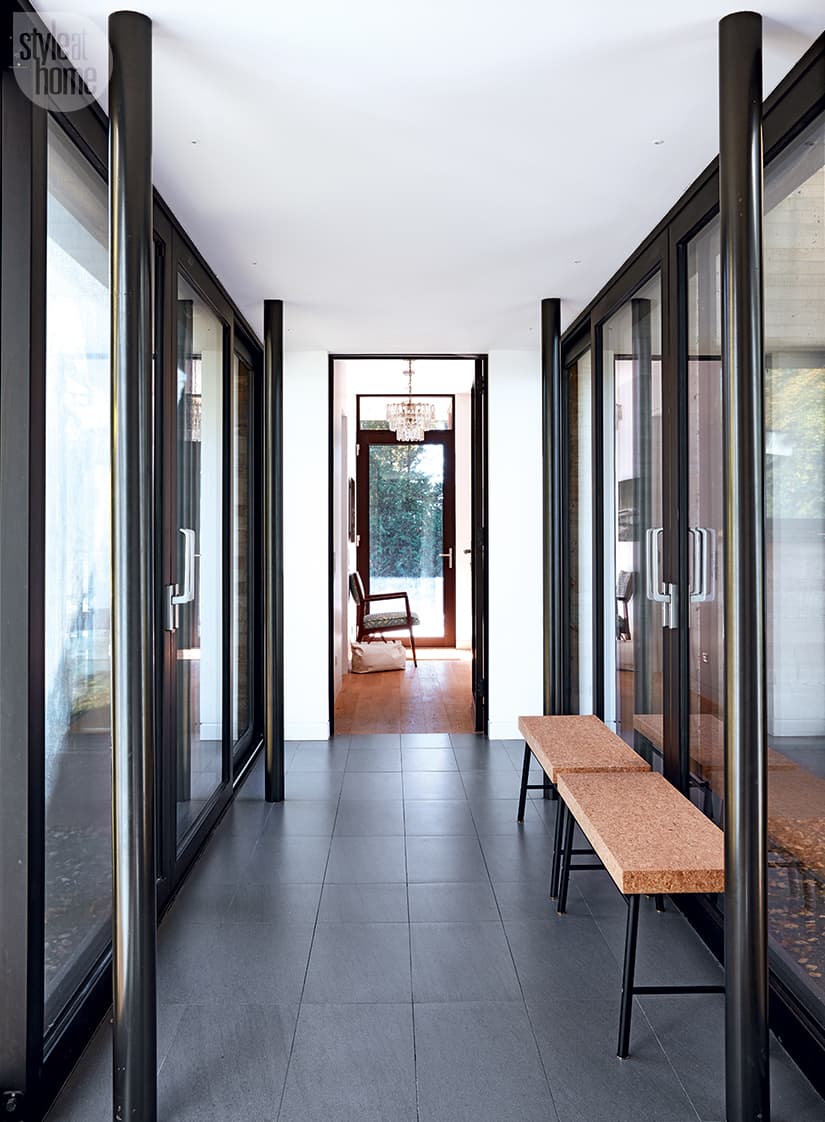 "The passage linking the new cabin to the original log cottage is particularly compelling," says architect Andre D'Elia. "Awash in natural light, it offers both east and west views of the property, encouraging pause and reflection along with an appreciation of the wildlife."

“The contemporary pale wood finishes paired with white-painted walls make it a soothing home-away-from-home in which the owner can unwind and de-stress,” says Andre. But this doting grandfather is never completely removed. He eats almost every meal with the main cottage clan, which often swells to more than 15 people; and when he’s ready for even more action, he visits the adults sunning on the dock or invites his grandchildren over to watch a movie before bed. As much as the cottage is, for kids, about running barefoot, collecting caterpillars and spending all day swimming, for adults, it’s about something entirely different: listening to the leaves rustling in the wind and the waves lapping the shore, watching sunrises and sunsets, taking deep breaths of fresh air and simply slowing down. But it’s wonderful to have little ones around to remind you of what it used to be about. 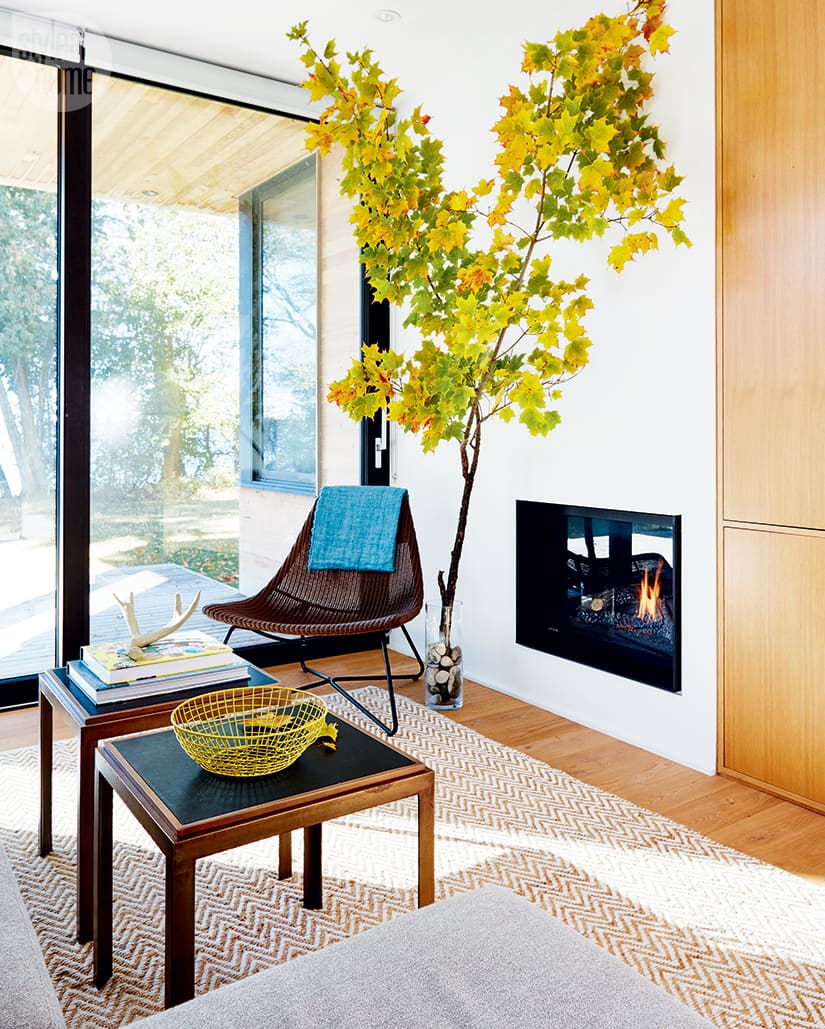 A long, sculptural naturally felled branch brings the outdoors in and captures the magic of autumn, when the surrounding trees transform into a mosaic of yellow, orange and gold. 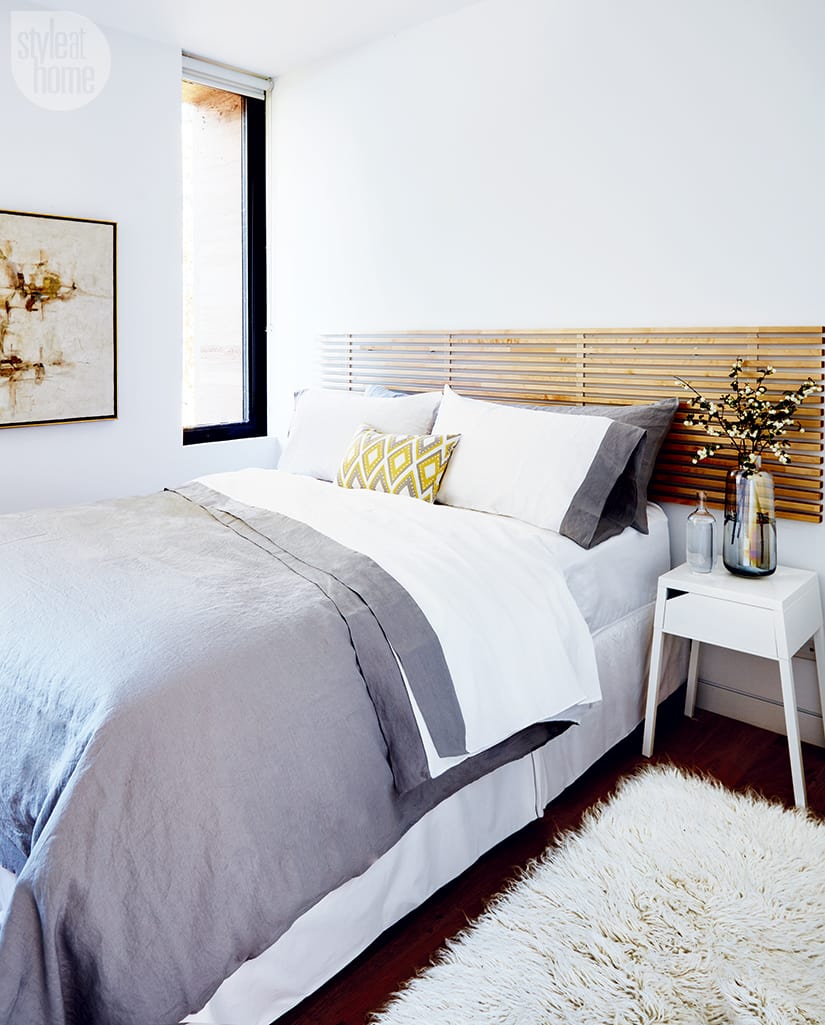 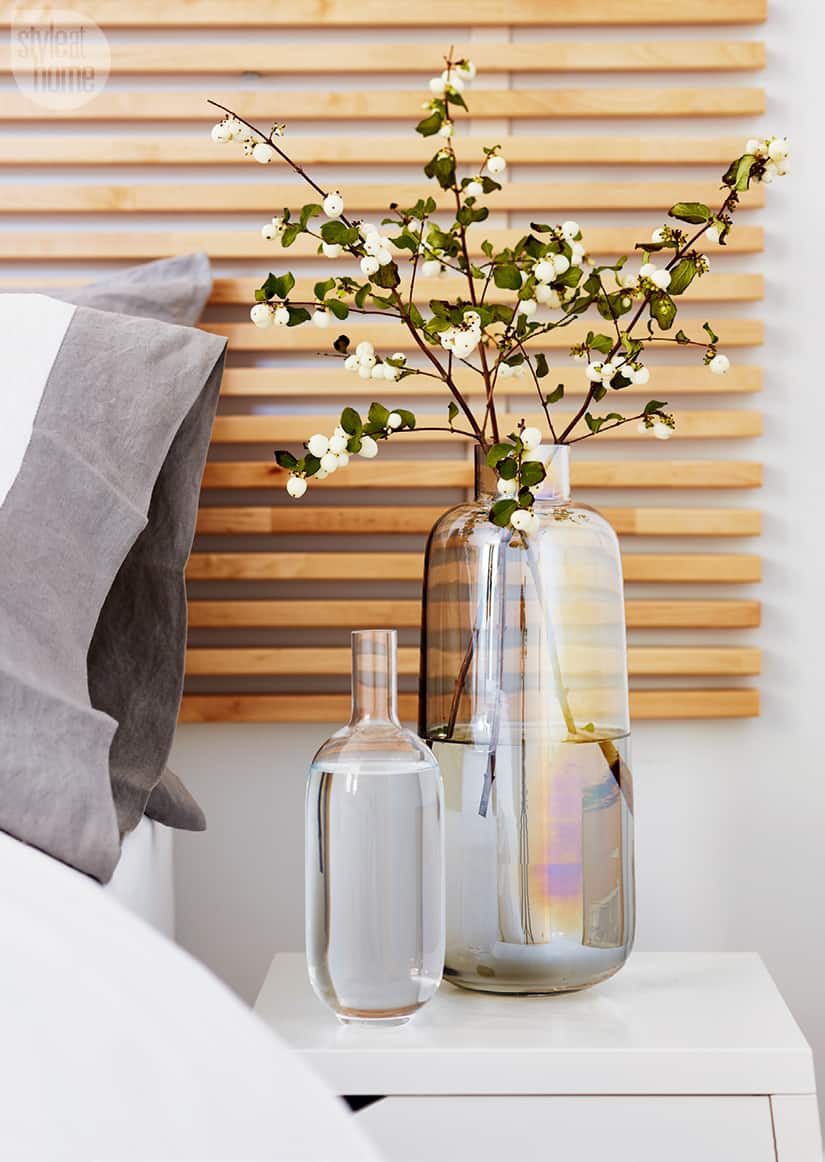 "The quiet, restrained design allows the majesty of the setting to dominate." 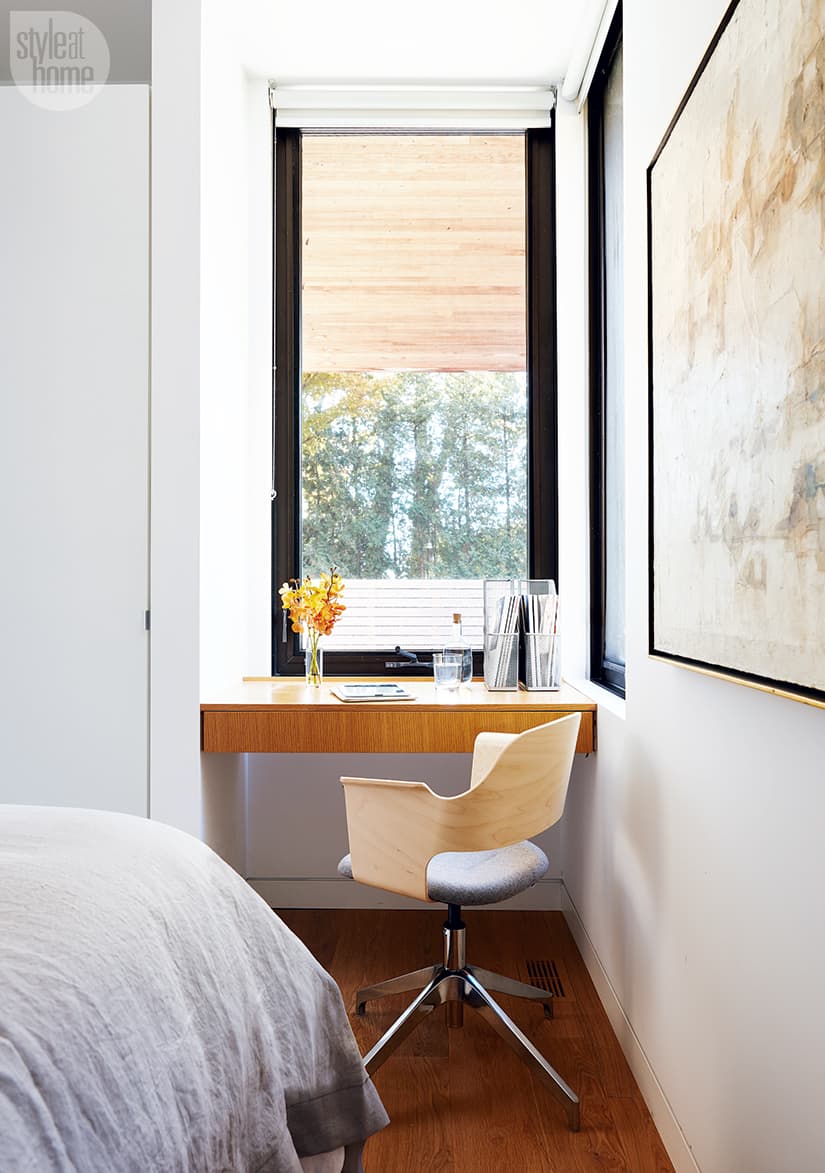 The minimalistic office nook takes advantage of a sunny corner in the master bedroom. Sunset-coloured orchids on the desk echo the shades of fall.